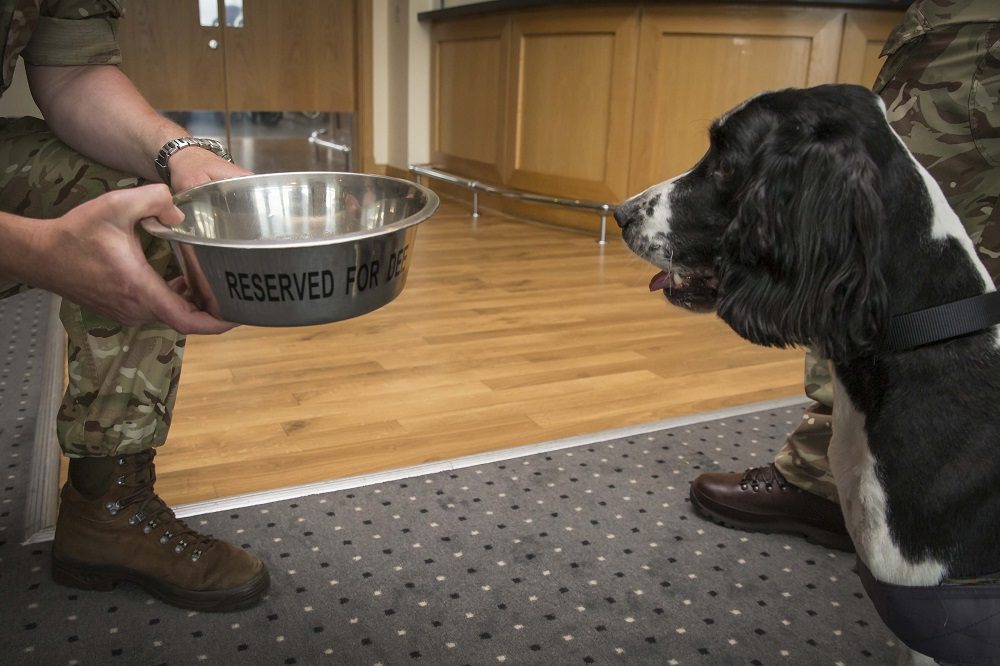 A Springer Spaniel named Dee has been named a new Sergeant and mascot at RAF Lossiemouth after retiring due to injury, which resulted in him losing a leg. He was presented with his new mascot’s coat by the Station Commander, Group Captain Paul Godfrey, in the Sergeants’ Mess at the Scottish RAF base.

As part of his duties, Dee will be appearing at appropriate official occasions and his cheery personality will help to de-stress active working dogs on base.

Born in the Netherlands in 2011, Dee joined the British Armed Forces at 16 months old and began training as an Arms & Explosives Search Dog at the Defence Animal Centre. After completing his training, Dee was posted to RAF Marham as an Arms & Explosives Search Dog, before being assigned to No 4 RAF Police Squadron, at Aldergrove, Northern Ireland, where he was one of 8 search dogs in the Province.

He became an integral part of RAF Police Search handlers working alongside 321 Explosive Ordnance Device Squadron, Royal Engineers, Search Teams, and the Police Service Northern Ireland whose main effort is to locate the presence of explosive devices, firearms and ammunition.

Unfortunately in 2014 during a routine exercise, Dee ruptured a ligament in his front right leg and due to the complexity of the injury a fixed plate was fitted to the area to enable pain-free mobility. After several veterinary reviews, the plate was removed in the hope it would be strong enough to take the weight of normal canine mobility.

By this point, Dee has been assigned to No 4 RAF Police Squadron at RAF Lossiemouth with his handler Corporal Adam Renison and showed signs of a promising recovery. However, despite Adam’s hopes that Dee would be able to return to active Service, his leg never recovered, and it was decided that Dee’s front right leg was to be amputated.

Despite no longer being able to fulfil an operational role, Adam realised that Dee had become an asset in the dog kennels and across the Station, "Dee has such a relaxed and happy personality that he helps Treacle, another of our working dogs, to de-stress in the kennels after her duties. So whilst we can keep Dee in the kennels here at RAF Lossiemouth we will do."

Adam had to do a bit of research into military regulations to ensure that all of the correct paperwork had been completed to enable Dee to join the Mess.

He says, “Dee now has his own service number, a jacket for formal occasions, and his own bowl in the Mess. I’ll make sure he respects all of the military rules and regulations when attending any formal functions. And I’m sure he will just be his usual happy self and not let his rank go to his head.”

How the Dog I Rescued Ended up Saving My Life

Autumn Adele is a model living in Los Angeles. To the outside world, moving to LA to launch her career 10 years ago was...

In This Issue... Talking Point: How Close Are We to Ending Puppy Farming in the UK? Health: How to Tell If Your Dog Has...

The Pawbo+ Has Arrived in the UK, but What Makes It Stand out From the Pet Tech Crowd?

The Pawbo+ pet treat cam arrived in the UK earlier this year and we have been scrutinising it with the help of our three...