A Better Understanding of Canine Aggression

Dog owners are usually horrified the first time they see their beloved pet kill a helpless little furry animal. I remember the day my good friend Tina saw her Golden Retriever Abbey kill a squirrel on the quad of the University of Illinois.

Even though Tina was studying for a Ph.D in animal behaviour, she was still shocked when she saw her gentle dog finish off a squirrel-like an expert assassin.

It’s even more shocking when you see Lassie kill for what looks like the pure fun of it.

My friend Dave, who always takes his seventy-pound half-shepherd-half-hound mix out for runs with him, was stunned when Max shot out after a groundhog one day, seized the animal by the neck, and then shook it violently until it was dead.

The dog totally ignored my friend, who was racing after him shouting, “Drop it!”

Max knew perfectly well how to obey the command “Drop it” when he had a shoe in his mouth. But there was no way Max was dropping a live groundhog.

The most upsetting thing was that Max didn’t have the slightest interest in actually eating his kill. He brought the dead groundhog over to Dave, dropped it at his feet, and beamed up at his master, obviously expecting Dave to be mightily impressed. 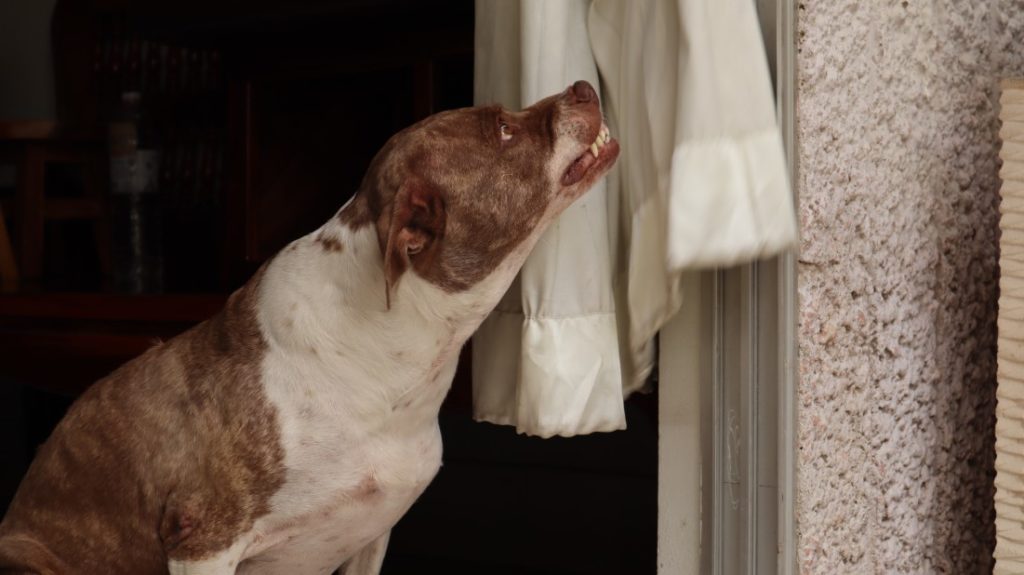 In a way, Dave was. This was the dog he trusted to play gently with his two-year-old son, and he’s just watched Max turn into a vicious predator who couldn’t be called off once the kill was underway.

After that, Dave said he started to wonder why people and dogs get along together at all.

We have 60 million pet dogs in this country, all of them predators wired to kill – why aren’t there daily newspaper reports of hideous fatal dog attacks on humans, instead of the actual number, which averages out to about fifteen a year, based on the years 1997 and 1998.

I had another friend who told me the same story. Her kids were young when she adopted what she thought was a shepherd-Lab mixed-breed dog from a shelter.

By the time he was fully grown, it was obvious from his markings and behaviour that the dog had more Rottweiler in him than anything else; he was a very dominant animal.

While he was still a puppy he preferred to spend evenings alone in his crate, instead of getting up on the bed with the family to watch TV. That’s typical of dominant dogs; they like their “space.”

A dominant dog doesn’t interact when you want him to; he interacts when he wants to. He’ll let you know when he’s interested. 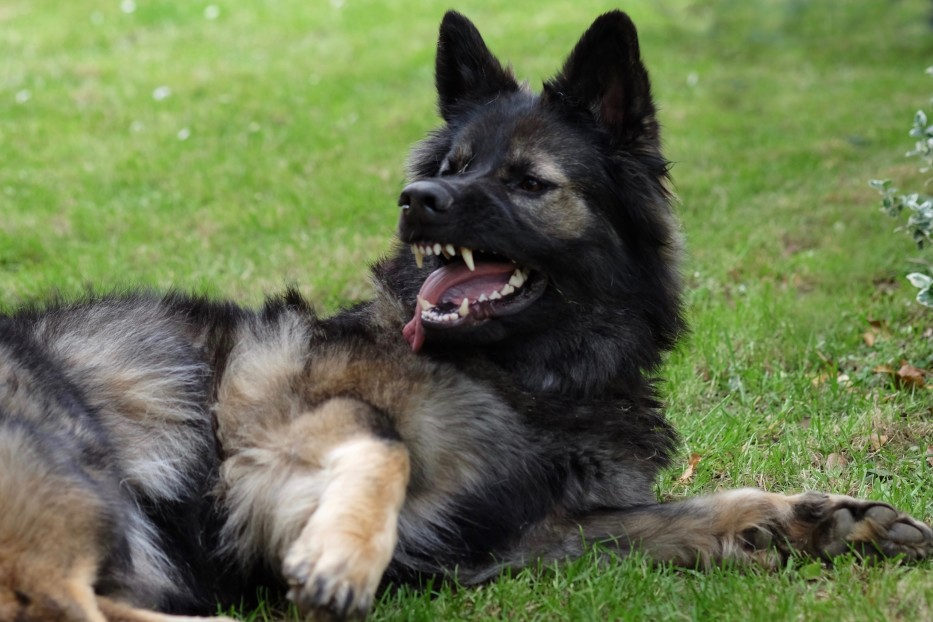 Even worse, people she and her dog met on the street were saying he looked like he had some pit bull in him, too. My friend didn’t think she’d accidentally adopted a pit bull descendant, but she was a little upset that her grown dog looked and acted so much like a Rottweiler.

A study found that Rottweilers and pit-bull-type dogs are responsible for the vast majority of fatal dog bites, with Rottweilers being number one.

Some of this is due to the fact that Rottweilers have gotten so popular there are a lot more of them around. But that’s not all of it.

Not even close. (For a number of reasons, including owners’ rights to equal protection under the law, the authors of this study did not recommend laws banning either pit bulls or Rottweilers.)

Seeing how dominant her dog was, my friend started to wonder about the whole dog-human relationship. She’d grown up with dogs herself, but now that she was a parent she realized just how much trust we place in these animals.

Rottweiler mixes probably aren’t any more dangerous than any other kind of dog, except for the handful of purebreds known for low aggression, like Labs. 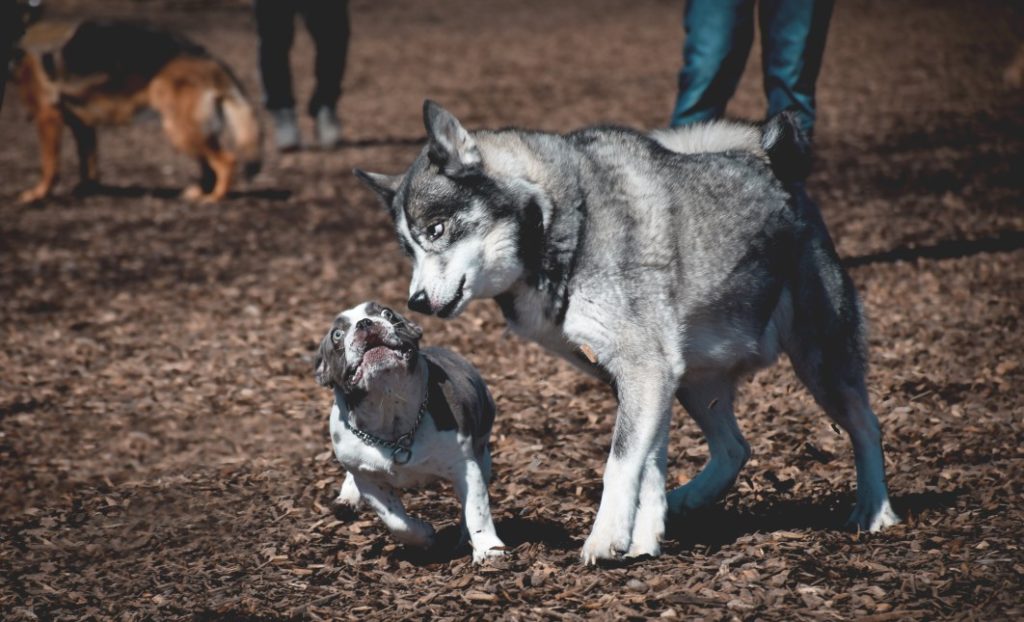 I say “probably” because there is some raw data available on the number of mixed-breed Rottweilers who have attacked and killed humans, but it’s impossible to interpret because we don’t know how many mixed breed Rottweilers are in the dog population.

Just eyeballing the numbers, it looks to me like Rottweiler mixes aren’t any more dangerous than any other mutt. But I can’t say for sure.

My friend figured she needed to teach the puppy to be more sociable, she would pick him up out of his crate and put him on the bed with her and the kids. The puppy would stay put, but his way of playing was incredibly aggressive.

My friend said his jaws would be snapping open and shut like a little alligator’s. Even though she’d lived with dogs her entire life, she would watch this puppy snapping and snarling away and think to herself, “Why do I have this animal up here on the bed with my kids?”

Well, probably she shouldn’t have had the puppy up on the bed, seeing as how the first thing any dog trainer will tell you is that a very dominant dog needs to be kept down low. A dominant dog should never be at eye level with a human!

However, today the puppy is a sweet and good-natured adult dog whom neighbours and guests all like to visit. He’s still dominant, and the family still has to remind him of the proper hierarchy (humans on top, dog on the bottom), but he is a cheerful and devoted member of the family. 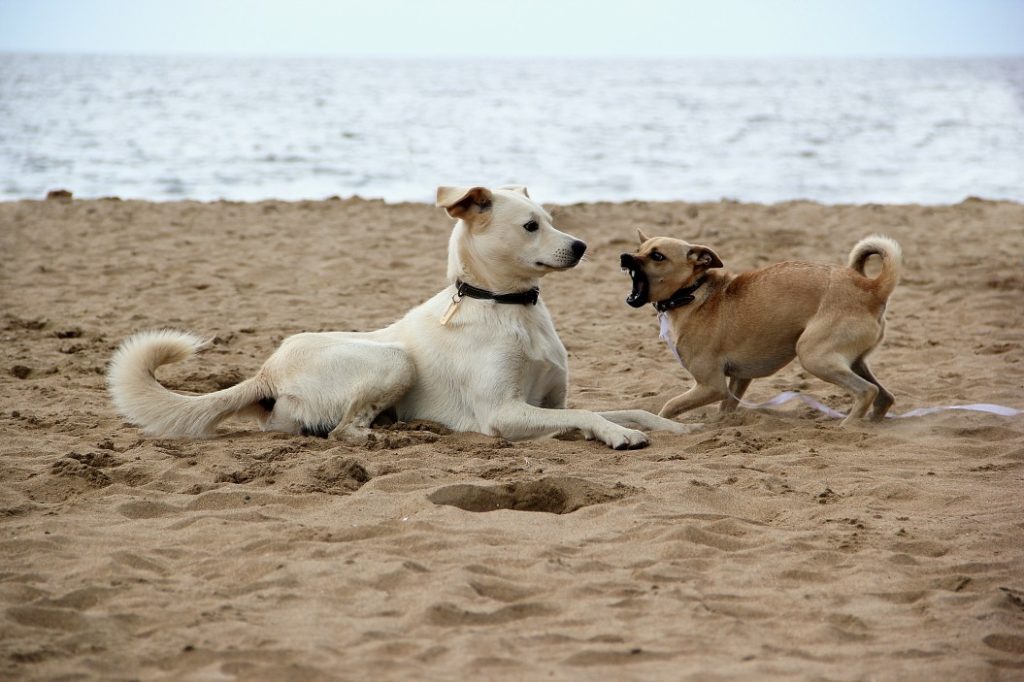 How does this happen?

All animals have ways of managing their aggression. This is one place where evolution has come in: it might be good for an individual animal to murder his rival, but it wouldn’t be good for the species if it was normal for animals to fight each other to the death.

Few adult animals apart from humans ever attack each other so violently that one of them dies.

Dr. Michael Fox of the Humane Society of the United States has found that prey killing and head-shaking movements first occur in four-to-five–week-old puppies during play and if you watch two puppies playing it’s incredibly violent.

They’ll snap and snarl and lunge at each other’s throats – I’ve seen one puppy grab another puppy’s throat, bite down, and shake his head violently, just like he’d do in a killing bite. But the minute the other puppy gives the tiniest squeak the biting puppy lets go.

That’s how they train each other that it’s okay to bite “this hard but not harder.” There are probably mechanisms to inhibit biting in all predators because animals who are armed with teeth need to be able to stop biting before they rip each other apart.

Dogs have another method of teaching each other what’s an acceptable level of aggression. When one puppy is getting too rough, the other puppy will suddenly stop dead in its tracks and stand stock-still facing the rough one. 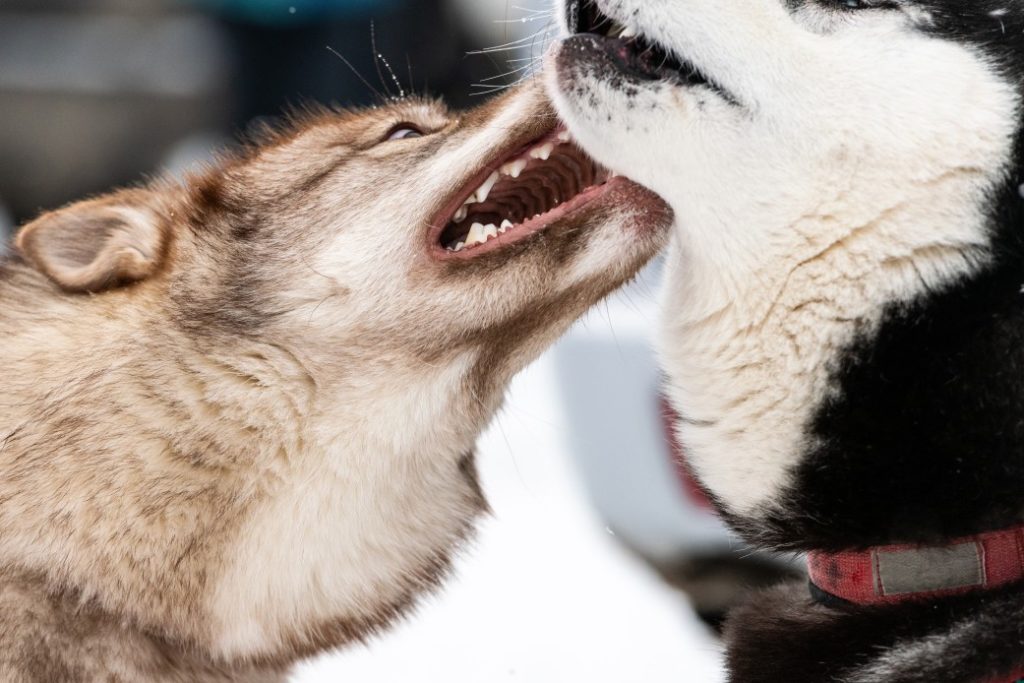 That always stops the other puppy, too. It’s like a time-out. You’ll see a lot of it if you watch a younger, much smaller puppy roughhousing with an older, bigger puppy. They’re both puppies and they’re both young, but one puppy is getting the worst of it thanks to size and age.

Owners who play rough with their dogs are relying on their dog’s bite inhibition to keep from getting mauled. Trainers say that’s not the smart thing to do because happy play can escalate into angry play if they get too aroused.

That’s one of the problems with having a multiple-dog household; the fun can turn violent and two playing dogs can suddenly bite each other for real.

Still, even though all trainers tell owners not to play rough with their dogs, owners almost never listen, and I haven’t read about people getting mauled by their pets in the middle of roughhouse play.

I saw an owner one time playing so roughly with his dog that it stopped being play to the dog and it made her yelp. He was grabbing her loose skin too hard, and she finally growled at him.

I want to lay to rest one standard piece of dog trainer advice. Playing tug-of-war is probably not as bad as people think. Most trainers will tell you that playing tug-of-war with your dog encourages him to think he’s your equal, which is bad. 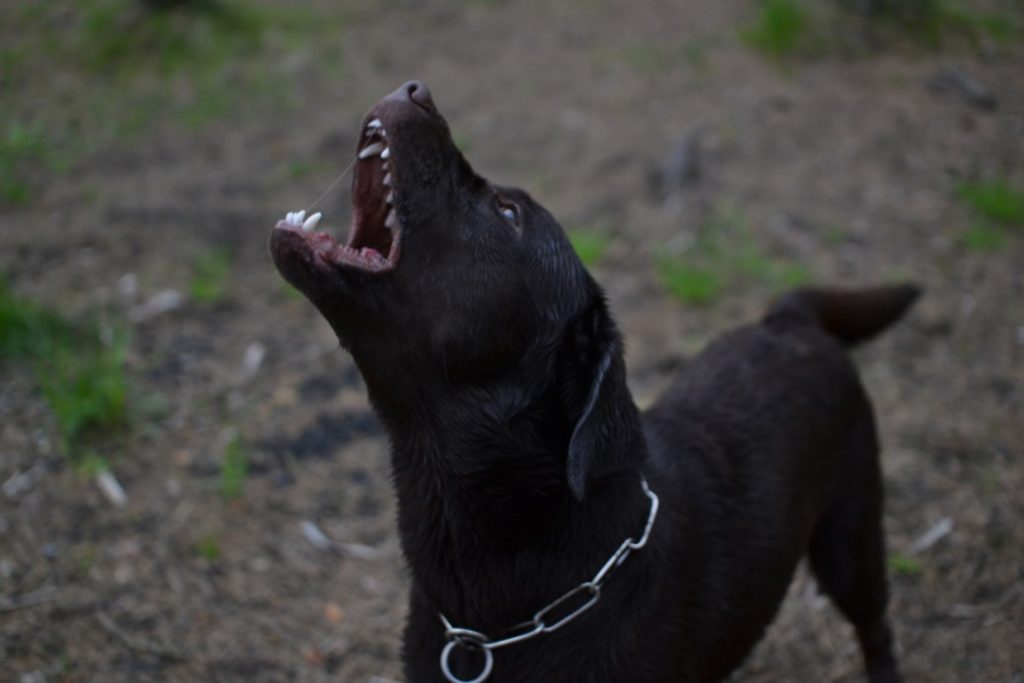 Other trainers take a slightly different view, which is that if you let your dog win a game of tug-of-war he’ll be less obedient, but if you win he’ll be more submissive.

However, a study of fourteen Golden Retrievers in Great Britain found that neither of these things was true, at least neither was true with the fourteen golden retrievers the experimenters tested.

The researchers had people either win or lose a series of tug-of-war games with the retrievers and then watched how the animals behaved. The losers were more obedient after playing the game – but so were the winners.

All the dogs were more obedient after playing tug-of-war with humans! And none of the dogs suddenly got more dominant. The winner dogs didn’t display any dominant behaviours like raising their tails up high or trying to stand over the person they’d beaten.

One study doesn’t prove anything, but I think it’s probably safe and fun to play tug-of-war with your dog, and it might even be good for him.

Just remember one thing: the study also found that the dogs who lost every time we're a lot less interested in playing any more tug-of-war. Apparently, a dog doesn’t like losing all the time any more than a person does.