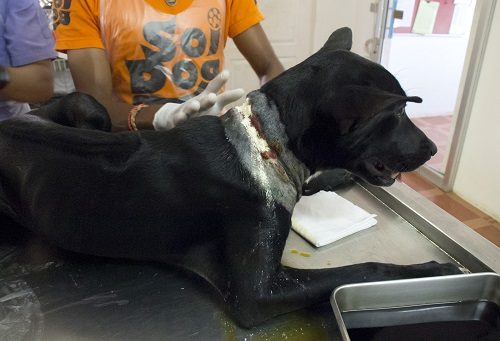 As an animal lover it's very difficult to understand why dogs, our most beloved and loyal companion, suffer at the hands of another. Yet here in the UK a call of neglect or cruelty is shockingly reported to the RSPCA every 30 seconds.

These calls are without a doubt made by animal lovers hoping to change the fate of a pet they see in trouble, and they're made each and every day across the world.

Here's the story of Dumbo, a dog whose life changed all thanks to his neighbour and the work of Phuket's leading dog and welfare charity, the Soi Dog Foundation.

In March 2014 Soi Dog Foundation received a distress call from an anxious lady in the south of the island, who was concerned about her neighbour’s dog. The lady explained that she could see into her neighbour’s front yard, and that for the past few months a dog had been tied up tightly by a chain around its neck, attached to a pole. She was worried about the health of the dog, and wanted someone to come down and take a look at it.

The lady explained that there was no shade for the dog to hide from the blazing heat of the sun. She also said that there never seemed to be any water provided for the dog, and that she had never seen the dog being fed. The dog looked, she said, anaemic, and would bark constantly as if it was trying to attract attention from passersby. She also said that the animal was most likely in severe pain, as she could hear the yelps and whimpers whenever the dog stopped barking for a minute.

Khun Jaroon, one of the Animal Rescue Officers at Soi Dog, raced down to the house immediately and was shocked to find Dumbo exactly as the lady had described. He was able to quickly cut away the chain using bolt cutters, just as Dumbo collapsed onto the floor, heat exhaustion taking its toll.

Dumbo was brought to Soi Dog’s shelter where a team of vets were waiting to treat him. He had a deep laceration around his neck where the chain that had kept him a prisoner for so long had worn away the fur and skin, cutting deep into the flesh. One vet, Dr Sai, cleaned and sterilised the wound, and applied cream and bandages. The other vets set about rehydrating Dumbo, and started administering medication to help with the anaemia he was suffering from.

He weighed just 10 kilos when he arrived at the shelter and looked in a dreadful condition, and so as part of a plan to bring him back to full health he was put on a diet which included food supplements to help speed up his recovery.

After a few weeks of intensive treatment, Dumbo started making good progress, and was moved to one of the Soi Dog shelters runs to continue his rehabilitation.

Dumbo would not have been safe if Soi Dog had returned him to his owner once he was completely recovered, and so instead it was decided to put him up for adoption which started his journey from Phuket to Essex. Pauline Hall saw Dumbo on Soi Dog’s Facebook page and fell in love with him. She contacted the foundation to enquire and the adoption process began after her application was accepted.

Dumbo flew from Thailand to his forever home in November 2014, and both have never looked back.

Speaking of her new addition Pauline said, “He is absolutely adorable. He gets on really well with his sister, a Staffie called Princess Sasha Bean, and he’s made our family complete. I can’t imagine life without him!”.

Dumbo chilling out at his new forever home in Essex.

Pauline continued, “Even though he’s a little monkey at times, stealing my shoes, we love him to bits!”. Dumbo’s favourite foods are chicken and banana, and his second best friend is Bentley, Pauline’s older dog.

He’s obviously learnt to bark in English then!

Dumbo is now living the life he deserves.

Soi Dog is a not-for-profit charity that relies completely on donations from individuals. Soi Dog sterilises and vaccinates street dogs and cats in Phuket and Bangkok. It gives them medical treatment when they are sick or injured, provides shelter for them, and has an intensive adoptions programme to find new homes for as many as possible. It also works to rescue and re-home dogs saved from Thailand’s illegal dog meat trade.

If you would like to help Soi Dog by volunteering at the shelter, fundraising, donating, sponsoring a dog, becoming a flight volunteer or adopting, please visit their website at www.soidog.org or see their page on Facebook for more details.

Help! Why Is My Dog So Gassy?

Have you ever said 'it's not me, it's my dog!'?  Dogs are quite well known for being flatulent and on occasion creating the most...

How Bored is Your Dog?

Trying to determine if your dog is experiencing anger, love, or any other “human” identifiable emotion (including depression) is difficult. To date, no one...

Planning a Day Out with Your Dog? You Need to Read This!

With the warmer weather here to stay (hopefully!) this month we're dedicating our Best Dog Products search to helping you build a picnic for...