Dogs, like children, go through several important developmental stages, and how they are treated during them has a major influence on their behaviour as adults. A mature dog's personality is influenced by how he interacts with his dam and litter mates, and his socialization during those critical first 12 weeks of his life. Some of this interaction will be handled by his breeder, and the rest will be your responsibility. 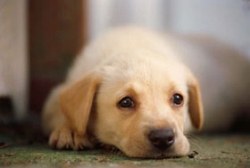 Because so many dogs are euthanised due to behavioural problems, all dog owners need to understand what is happening to their dog during these stages, and how to manage them so their dog is properly socialized and trained.

By the time a puppy is 5 weeks old, he is mobile and able to interact with his litter mates and his human family. Playing with other dogs teaches him about normal doggie behaviour and communication and spending time with people teaches him not to be afraid of humans of all shapes and sizes.

Ideally, pups should stay with their canine family until they are 8 weeks of age. Those that are taken from their litter too early don't learn essential social skills. These skills include how hard they can mouth other dogs and people, how to tell when their playmate has had enough, and how to interpret dog communication methods such as way they hold their tail, and the meaning of the position of their ears or lips.

If they don't get the chance to learn these things during those first 8-12 weeks, they may never learn them. This means that your pup should be exposed to as many experiences, environments and people as possible during this socialization period.

From 9 weeks of age, puppies are very focused on people. This is the perfect time to start basic training, using positive methods such as praise and food rewards.

When a pup is around 10 weeks of age, they go through a fear stage. They are less confident, and may become anxious and nervous about items and experiences they have dealt with on a daily basis. Just because your pup is nervous, don't isolate them and molly coddle them. They should still be exposed to the world around them, and new experiences, but make allowances for them to be a little nervous, and use lots of positive reinforcement. This fear period is usually well and truly over by 12 weeks of age.

During this stage, puppies start to chew, as they lose their baby teeth and those big adult teeth start pushing through their gums.

There is another fear period at around 4 months of age, and this too should be handled with positive reinforcement, and continued socialization with people, places and animals.

These adolescent months have their own challenges.

Dogs start to ascertain their status within their household, both with their human and animal family. Their interactions during this period will lead to them being dominant over some members of their pack, and submissive to others. If it hasn't been done already, dogs should be taken to obedience classes, to learn good behaviour and to interact with other dogs and their owners.

Puberty may lead to sexual behaviour including mounting people and dogs, and urine marking. This is the best time to neuter a dog to reduce these undesirable habits.

Many people don't make the effort to properly raise and socialize their puppy, feeling that it's not important, or they don't have time. However, dogs that grow up isolated in that first important year of life can develop behavioural problems including aggression and extreme shyness.

These behaviours make it difficult to include your dog in all areas of your life, and is very difficult to resolve. I once treated a dog that left his litter at 5 weeks of age, and his owner didn't make the effort to socialize him when he was young. This dog was so aggressive I could barely get close enough to him to give him medication.

He was muzzled, sedated and carried into the consulting room as his body vibrated with every growl. After as good an examination as I could do under the circumstances, he was given the necessary injections, then he was carried back to the car.

Some dogs are aggressive and there's nothing you can do about it. The tendency for aggression is in their genetic make up, and scientists are starting to identify the gene responsible.

I have had personal experience with one such dog. My Australian Cattle Dog puppy was well socialized with puppy pre-school and dog obedience classes from 12 weeks of age. She was encouraged to mix with other well mannered dogs, and had regular play dates. In spite of this, she was dog aggressive, and whenever she was taken for a walk, she would snarl and lunge at any other dog she saw.

I tried a retraining program and behaviour modifying medication, with no success. It wasn't until after she died that I met the owner of her full litter sister, and found out that this dog had similar behaviours. There certainly may have been a genetic cause for their aggression.