Abi Titmuss is a British personality known for modelling, TV roles and most recently acting. Having been acting for five years, she's set to break the LA scene with a busy year ahead. Some people may feel they know Abi from her time in the spotlight.

Here Kim O'Meara uncovers the true Abi, her love of dogs and in particular one special man who stole her heart a year ago.

Tell us about your dog, Danny - we'd like to know everything about him!

He's a cross-breed and he just turned 1 on New Year's Day. He's a really playful dog, a real live wire! He loves lots of fuss and cuddles and gets on really well with other dogs. He's a little timid of children so I'm walking him past the schools every day now to try and get him used to them.

I got him from the Dogs Trust in West London and I knew at the start of last year that I was going to have a block of 3 months free so knew I wanted to get a dog and would have the time then to settle a new dog in properly.

When I went to look around I primarily thought I'd want an older dog, and to be honest didn't think I'd see puppies in rescues, but I had a look around and didn't see a dog that was right for me. Then on my way out I walked past an area that had puppies in. I had a look and saw Danny's litter. 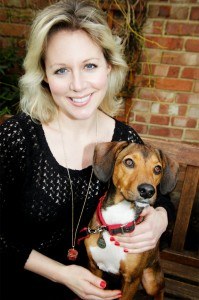 They had come in from Northern Ireland and had spent a couple of nights outside before being brought in by some local people. He had 5 litter mates, maybe more, but they weren't too well when they came in because of their rough start.

When I saw Danny and his litter they were around 6-8 weeks old at the time and still being treated to get better.

I went home and did lots of research, went on sites such as DogsBlog.com and read lots more books about choosing a puppy. I went back in to see Danny and his litter everyday for the next 3 weeks. I felt it was such an important decision I needed to read as much as I could and going regularly I was able to take the points I'd read, such as in Dr Bruce Fogle's book he talks about finding a healthy dog, not one that's overly yappy, not one that's too nervous.

I spotted Danny the first time I went and I still felt he was the one for me so I took him out every day and watched him playing from a distance with his friends all while bearing in mind what I'd learnt.

We owned a dog growing up, a Yorkshire Terrier called Blue. It still breaks my heart, he was being looked after by somebody because we were away on holiday and he got run over.

I was 9 years old at the time and I don't think I ever got over it to be honest. Circumstances meant we didn't have another dog growing up so I'm so pleased last year gave me that free time at home to get Danny.

Did you always know you would rescue your next dog?

I did. I think when there's so many dogs out there looking for new homes, that's the decision made really. I knew I wanted a cross-breed as well because they're typically more healthy and can live longer. I also think cross-breeds are more interesting.

Danny has so much personality. I think when you rescue a dog you get so much back and know you've done something really worthwhile. I didn't know this feeling I have of knowing Danny now has this live would last with me as long as it has.

It's a lovely feeling and he gives me so much, I wouldn't be without him for the world.

You've had a pretty varied career from modelling, reality TV appearances, to your series of novels aswell as theatre acting roles. You must love the variety? What are you currently working on?

I've been acting now for 5 years and I do love TV aswell. I think I like not knowing what's going to happen next. It does bring a bit of insecurity with it but the fact that you could get a call to fly to LA for a film without being tied down is great.

It's hard work and when I started I knew I had people throwing daggers, but my first role won me an award so no matter what anyone said that couldn't be taken away from me.

I also believe the harder you work, the luckier you get.

I love variety. I don't think I could do the same thing day in and day out.

This year is a busy one I've got 3 films and a play coming up and I'm just sorting out Danny's passport to come with me to LA. We'll be moving towards the end of the year I think and he loves the warm weather. Because his coat is so short, it really suits him. He also loves beaches so I think we'll enjoy the LA beaches. I've also checked the best local dog walks for us there.

When he came on tour with me last year I think we went on almost every British beach and he dug a hole on every one.

Do you have a motto that you live your life by? What would you say Danny's motto might be?

Mine is live and let live. I think Danny's would be all or nothing because he's all go, or sleeping.

If you were to swap roles with Danny for a day, how do you think he'd cope being you and what would you most love about being them?

He did really well on the photoshoot for you so I think he'd be fine being me. He's also really good at meeting people so he'd be good with that side of things. I'm not sure how he'd be as an actor although he's been on stage with me a few times. I have a photograph of him before a show at the Grand Theatre in Blackpool just looking out onto the seating.

I think I'd enjoy being him aswell, I'd enjoy the cuddles! 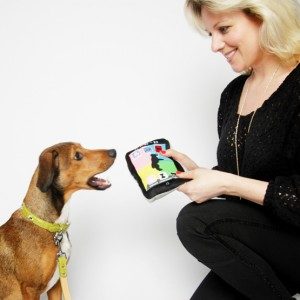 Rob Brydon – Well he's great at impressions, very funny and has had a hair transplant. He's also Welsh. So maybe a Welsh Spaniel.

Paul Ross – Which breed barks a lot? I think he'd be a Terrier because of the barking, but a Terrier cross Wolf, because he would eat you if he could.

Big dogs or little dogs – Big dogs make you want to cuddle them and I would love the room to own one. I've met some lovely tiny dogs but I don't think I'm really a small dog person. Danny is just right because he's small-medium sized.

Pedigree dogs or x breeds – Cross-breeds, I think the problems with pedigrees really have just made me treasure cross-breeds and their healthy state more.

Describe the last time you laughed outloud because of something you saw Danny or another dog do.

He's always doing things that make me laugh. I remember this one time I was in the shower and he was only little but I could see him through the glass as a blurry image. Normally he'd be running around but this time he was standing stock still not moving at all, just looking. Anyway when I got out he was wearing my knickers. Full on properly wearing them, he'd got them over his head and they were stuck. He was okay but I did say to my friends I'm never leaving my high heels out. I took a photograph and sent it to my close friends.

Then last week he fell in the pond when he was watching a duck. He does swim in there sometimes but he didn't mean to go in this time. He fell in and I did think I would love a photo of this while he was climbing out but I'd have felt too mean to take it so went to rescue him instead.

I'd firstly invite Marilyn Monroe. I love her, I think she's fascinating, very clever and witty and I'd love to know more about her. I had to research her for a role I played in Arthur Miller's Two-Way Mirror.

Play – MacBeth. I've starred in it and I really just love Shakespeare so this is one of my all time favourites.

I think there's so many plus points, I couldn't narrow it down to one really. There's the love and companionship and the exercise that you get through having to walk them regularly.

And for me living in London, the city has become a different place. Every day you go out and you'll have a conversation with a stranger. I think dogs bring people together and I know so many more people because of Danny. In fact, I think people know him before they know me.

Dogs give people permission to speak, whereas without a dog you walk around looking at the floor or not really making eye contact, with a dog, people interact more and I love that.

In fact, because of Danny I ended up getting a job. One time we were out and about, we were walking past this coffee shop and there were people sitting outside. Danny went up to one of the tables and I got talking to the people there. One of the guys was a director and cast me, he was someone I'd not have met otherwise.

Finish the following sentence, my dog is... nuts!

And finally, this is always a tough question and often requires a fair degree of thinking time but….If Danny had the ability to speak and answer one question and one question only, what would you ask him and what do you think that he would say?

I think I'd ask him 'is there anything about your life you would like different or that I could do better?' and I think he'd say 'yes, more treats and to sleep on your duvet'.

KennelKitchen.co.uk for their Handmade Dog Treats!

Pride & Joy Pet Couture for the bundle of luxurious goodies such as a Leather Collar and Lead set with matching Harness and IBONE dog toy!

Plus, special thanks to The Mayhew Animal Home for allowing us the space and time for the fabulous photoshoot with Abi & Danny