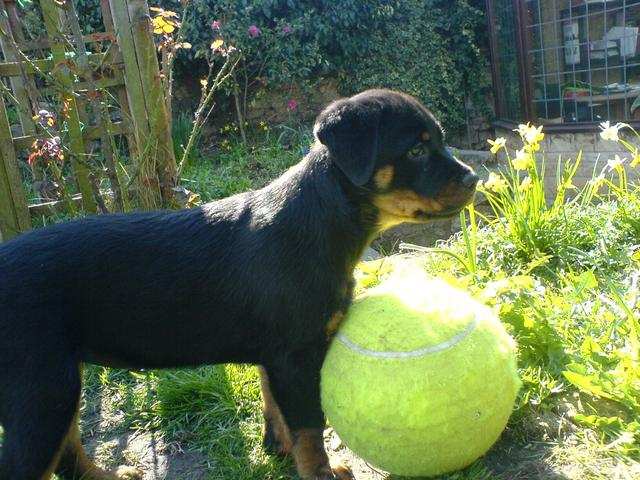 Before October 2014, Mia used to enjoy looking at toys or picking them up to greet you with a gift as you opened the door returning home from wherever you might have been (ideally you'd have visited the shop, for food, for her). Although she was always up for a short playing session with a tennis ball or football. She also used to love a massive tennis ball in her younger years.

But with Chloe around, life was quieter. It went at a more steady pace which she enjoyed. If you think of a jaunty but peaceful tune, you'll have the tone of the home about right.

Then, Chloe sadly passed. Time went on, and Mia was joined by the duo now referred to as the 'hardy boys'. Cue more lively, cowboy type music.

The duo, also known as Chris and Dan, are energetic boys who love a tussel, normally with each other unless Mia sends a signal that she's ready for business with a shake from head to tail (stump) and a quick paws down action. Ever respectful, and slightly terrified of her, they wait for a second sign they're able to engage from her or any adult nearby before piling in.

Due largely to their boisterous nature, toys are in abundance at home but rarely to they last and as such we're always on the look out for new toys who can stand up to our 'hardy boys' and so when Chew & Chase offered to send our trio some new toys for review we jumped at the chance on their behalf. Aware of Mia's adoration for food, she was to be sent a toy able to be stuffed with food, while the boys would receive a combination of fun and bouncy toys matching their fun outlook on life.

What did our trio receive?

Mia received an Orbee-Tuff Strawberry (you may remember our trio previously reviewed their Nooks), priced at £9.95 from Chew & Chase, while the boys received a selection of toys including a pack of Chuckit Fetch balls, priced at £12.95 and a Kong Squeezz Ball, priced at £3.95 from the online store.

So, first things first - we decided to let everyone have a sniff of their own toy before dividing up.

However the bouncy, minty Orbee-Tuff Strawberry (although at this stage stuffing free) attracted the attention of our very own 'toy monster'.

Then, we moved onto the big reveal of the Kong Squeezz Ball for the boys.

It wasn't long before Christopher was praying it would be his.

Danny's eyes tell you he's seen this before.

Before the final reveal of the Chuckit! Fetch Medley took place, and by this time the boys attention had been diverted to the toys previously shown to them and now sitting waiting to be de-labelled, but Mia was very interested in these colourful, bouncy (and in one case glow in the dark) balls.

So, how did they get on with Mia, Danny and Chris?

Well, after being de-labelled, Mia settled down with her Strawberry toy stuffed full of peanut butter. Thankfully the toy washes clean easily. It is also non-toxic and recyclable, although we won't be discovering this for ourselves for some time as this toy was a huge hit.

Next up, Danny chose the Kong Squeezz Ball to play with and this squeaky toy was also a huge hit because he loves to throw his toys around. The noise is a bonus I think. In fact, it's easy to imagine him as a rocker in a mosh pit when he's at his happiest.

He's a dog who loves to play and chew, but equally happy when he's encouraging Chris to steal from him. Driveby 'have you seen what I've got Chris' looks are a regular part of his toy routine.

Finally, Chris opted for the trio of Chuckit! balls which includes a Whistler Ball, Max Glow Rubber Ball and Rebounce Ball. He's become a 'two toy Tommy' in recent months so this was no surprise really and a natural progression.

These balls are perfect to use with the Chuckit! thrower or on their own so we took them outside to play.

You can use in the park or anywhere there is plenty of room to run and play really.  Again, thankfully they wipe clean.

Mia ventured out alongide the boys waiting for her ball to be thrown, unaware (or now so completely used to so doesn't notice) the chaos behind.

All toys certainly stood up to the challenge of our 'hardy boys' (and girl) and after much deliberating and swapping...

The results were in. They passed the test, but one by one they seemed to disappear. It didn't take us long to work out where they were going to, or who with.

But, we always knew it would come down to this.

A huge thanks to Chew & Chase for the thought behind which products our 'hardy boys' (and girl) would like! Find out more about the range of dog toys and accessories for 'dogs with plenty of ruff' at Chew&Chase.com.

How Much Does Your Dog LOVE Spring?

When Spring arrives you can almost feel the weight fall off your shoulders. The weather gets brighter and the muddy garden can finally (hopefully)...

Teach Your Dog to Take a Bow in 6 Easy Steps

Have you ever wanted to teach your dog to take a bow? Well, if so you're in luck! We've asked Maria Ruiz, owner of...

Talking Point: 12 Dogs Who Could Teach You a Thing or Two About Hide & Seek Behaviour: 5 Things I Learned Training Dogs for...

Simona Fusco is a woman of many talents who clearly loves to keep busy. Born in Milan, she began her career modelling at aged...