What Makes A Dog Tilt Its Head To The Side?

In our ongoing series on dog body language and, quite frankly, because our dogs just do some things that make us ask why? We take a look at the curious case of why dogs cock or tilt their heads to one side. Come on, hands in the air, who hasn't laughed and giggled when observing their dog hear a strange noise and responded with a clockwise head tilt in their efforts to work out what's going on. I'll bet there are even some of us who've gone out of our way to actually MAKE the noise that prompts the dog to cock its head. It's amusing to us. But why do they do it? 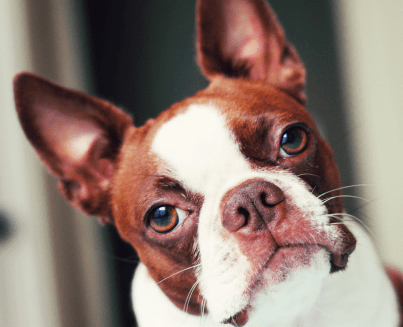 Watching your dog cock his or her head to the side, especially when you are talking to the animal, is just too cute. Some dogs do this and some do not, but those that make this gesture are doing so for very good reasons.

Theory No 1 on Why Dogs Tilt Their Heads

Most often, a dog will tilt his head to the side in order to hear more clearly. When they turn and tilt their heads the ear becomes more exposed in an up-and-more-forward position. The result is that the inaudible sounds (fuzziness) that they were catching will become clearer to the ear.

Other Dogs Tilt Their Heads For Different Reasons

Many dogs have learned to cock their heads to the side simply because they get a reward. What is the reward? Well remember at the beginning of this article how I mentioned that this gesture is just too cute?

Your immediate response is to say something like, “Awwwww, like at Buddy with his head turned to the side, how cute!”, followed by lots of petting and soothing tones. This is a reward, and some dogs may have turned their heads to the side a few times in the beginning, but soon enough learned that this will give them lots of that lovable attention.

So if you have ever given a dog this kind of attention after it has tilted it's head in a really cute way then you have just positively reinforced that behaviour. And you know what? The dog will remember this and might do this more often – not to hear better, but to feel better.

Dogs can understand part of our human language, but most of it is just a fuzzy blur to them. Almost like when a human hears a foreign language. Dogs cannot take in everything we say. But canines are very good at observing and becoming familiar with human tone of voice, body language as well as eye movement.

Trying To Absorb Every Sound He Can

It is when a dog notices something of interest that its ears perk up to catch all the sounds. If the sound comes from the front your dog might cock its head in the direction of the sound, but if the sound is coming from a direction to the side of him then there is not likely going to be any head tilting. Why? The ears are in the perfect spot already to pick up the minutest of sounds.

A dog's ear shape and position will have something to do with how the dog perceives sound and how often a head tilt might be noticed. Even the age and experience of the dog play a role in this. A German shepherd with pricked up ears might hear better from the front than a cocker spaniel who would hear better from the side. Certainly a long floppy eared dog would be seen tilting its head more often than a dog with open ears.

So, trying to understand why a dog tilts his head we learn it's probably down to the dog trying to understand us or the strange noises of our world. It's been said that a dog who tilts their head to the side is showing intelligence. A very subjective position to take. Canine intelligence is still a largely disputed area of scientific study. A clever dog is not always a dog who happens to be what we like to call 'obedient'. However, head tilting by dogs does tend to suggest an advanced propensity to want to understand and identify an audible stimulus.

Well, that's enough of the serious talk on dog head tilting, let's get to the real reason your here....videos of dogs tilting their heads!