At the San Diego Zoo, there's a sign near the rhinoceros enclosure that reads, "Stay back at least 20 feet and beware when I turn my back to you." The reason for the warning is that rhinos like to mark their territory with urine - and when you consider that the average male rhino weighs 4,500 pounds and is the second-largest land animal, you can imagine what happens when they do, writes Suzanne Smith. 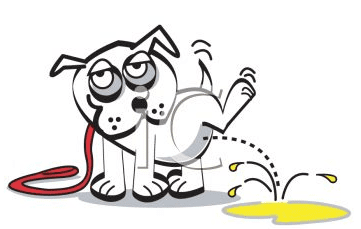 It's a funny thing about animals and their territory: They often make it a point to announce what belongs to them, and they exaggerate how much space they themselves actually occupy. Bears, for example, make scratches on trees - not down low, but as high up as they can reach. Wild cats back up to rocks and trees and urinate upward. Dogs lift their legs and do the same thing. For pictures of cute animals, be sure to check out campingfunzone.com.

Basically, they're leaving their scent where other dogs will smell it, and they put it as high up as they can, so that it will appear that a big, macho dog has been there. The best way for them to gain that extra height is to lift a leg, tilt their bodies slightly to the side, and aim for the highest spot.

Urine is loaded with pheromones, chemical scents that tell a lot about dogs - their sex, their social status, even what they eat. It's amazing how much information dogs are able to gather from a scent. Every dog's urine has a different smell, so these scent markings are very personal signatures.

They allow dogs to tell the world about themselves, and other dogs are very interested in learning more. Marking territory via leg lifting is mainly a guy thing, especially among dogs with big macho personalities. It doesn't matter how big they really are. They want to seem big.

All of this leg lifting isn't as random as it appears. Dogs who share territory - in today's world, common territory may be the perimeter of a yard, a lamp post on a street, or the trees in a public park - have developed an etiquette for who pees where. A boisterous, take-charge dog will always aim high.

The quiet, more submissive dog who follows him is going to add his scent to the message board, but he doesn't want to appear arrogant or challenging. So he aims a little lower. And If you take an intact male to the park, he might want to mark as many as 20 bushes and 15 fence poles. A neutered male would be more likely to hit only two or three places.

Female dogs also leave chemical scents when they urinate. Since they aren't as concerned as males with marking territory or making social displays, they usually squat rather than lift their legs. Some females, of course, have personalities that are every bit as outgoing and assertive as any male's, and these dogs sometimes lift their legs.

Be Sure That Your Dog Always Has A Place To Urinate

Urination is basic to life. It's the single most important way our bodies eliminate the waste that results from our minute-to-minute internal functions. If we don't let go of this fluid at regular intervals, some very negative things begin to happen. For starters, if your dog is confined to your house or apartment and can't get out to urinate, he just isn't happy.

Here’s why: Dogs are den animals. Humans are not. We can punish other humans for their crimes by putting them in a small enclosure called a cell. We humans hate this so much that many of us are motivated not to commit crimes for fear of this consequence. Dogs, on the other hand, have no problem with snug places.

Exhaustive studies of the behaviour of wolves, as well as of wild and domestic dogs, show them clearly to be den animals. Any time a dog feels a threat, needs to nurse his wounds, or wants a safe place to raise the young, he seeks the security of the den. Hand-in-glove with this instinct goes the commitment not to soil that den. What does your dog regard as his den? The whole house. 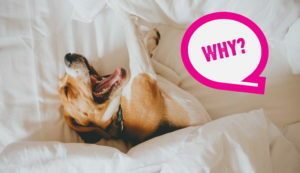 Why Do Dogs Do That Thing They Do? (FAQs For Dog Owners) 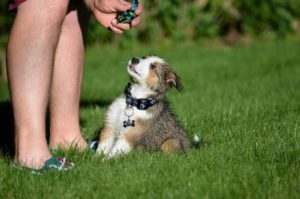 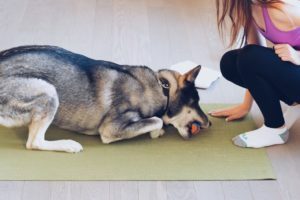