A question we are asked regularly, why do dogs eat poop - or - what is coprophagia in dogs, tends to suggest there are many dog owners who want to understand why dogs eat poop and also discover a solution to the problem (and yes, it IS a problem).

If you just want to know why dogs eat poop, it’s because they inherited the behaviour from wolves and because some dogs are really greedy. (Yes. Really). Read on.

If you want to know how to stop a dog eating poop, you need to modify the unwanted behaviour the same way you would teach a dog to discontinue any other form of undesirable behaviour.

A dog eating the faeces or another animal is not healthy. Do they do it because it tastes good or as a result of nutritional deficiencies? Is eating poop natural behaviour for dogs?

The answer to these questions are incidental to the fact that eating poop leads to intestinal parasites and a host of other medical problems. It's undesirable behaviour and if your dog is a stool scoffer then learning how to stop your dog eating poop using positive reinforcement is critically important.

In this guide we'll explain why dogs eat poop and how to cure it.

The most common reasons why dogs eat poop

There are many reasons for which dogs eat their poop. Below we outline the most common reasons for canine coprophagia.

Do dogs eat poop in the wild?

A puppy's mother will naturally eat the faeces of the pups until they are old enough to come out of the den. This is to protect the puppies from predators, disguising their smell and keeping their living environment clean.

It's nature's way of keeping a species alive during their most vulnerable months.

The logical origin of why dogs eat poop

Scientists have long suspected that poop eating by the mother of puppies is as a trait inherited from wolves, as a way to keep the den area free of parasites that live, or more to the point, develop in the poop.

A further theory then expands to suggest that dogs have evolved to eat fresh faeces deposited around their own den area, which would initially be free of infective parasites, as a way to keep their home clean.

Dogs haven't yet developed the ability to harness the power of viaducts, sewage filtration systems or even a basic flushing toilet, so they do their housekeeping the old-fashioned way. See poop, eat poop, poop is gone.

Some domesticated dogs of juvenile to adult ages will eat their own poop, other dog's poop, fox poop, cat poop, cow poop - in fact poop of just about any other animal, but why?

It's far more likely to be a behavioural compulsion rather than a specific nutritional issue.

In fact, in a study conducted in an attempt to conclusively answer the question of why do dogs eat poop, the findings showed that

However, there were some extremely revealing traits that united the dogs who ate poop.

This is fascinating information in-so-much as it reveals that dog owners who are worried their dog is eating poop as a result of some missing nutritional element in their diet can rest easy.

a) They're inclined toward greed (eat what they can, when they can, as fast as they can)

b) The poop they focus on is fresh, smelly and correlates with an inherited trait from their wolf ancestors who would eat fresh poop around their dens.

How to stop dogs eating poop

Now we know (or strongly) suspect why dogs eat poop, we can put in a simple intervention plan to modify their behaviour and cure this unwanted trait.

Knowing that dogs are generally not eating poop because of some nutritional or medical issue, means it's a manifestation of two key behavioural elements

Scavenging is innate in dogs. That's not news. But not all dogs are as greedy as each other. Dogs who really scoff their food are more likely to eat poop, so if you're worried why do dogs eat poop even if they're not hungry, it's all explainable by the fact that dogs will often eat as much as they can, as fast as they can because that's just their nature. 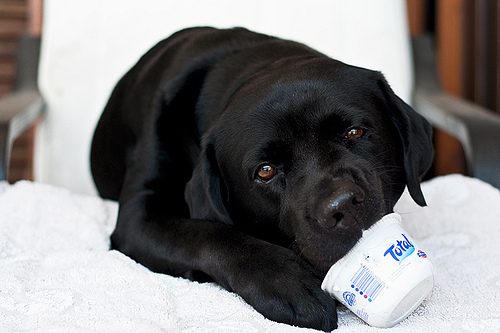 Not all inherited traits are as strong from dog to dog. Some Labradors live for the chance to pick things up, others are less driven. So it is with the poop eating trait that some dogs have inherited from wolves.

A note on parasites in dogs who eat poop

Dogs with parasites / worms tend to have a voracious appetite. Parasites deprive dogs of the nutrients they consume, so a dog with with worms can quickly be transformed from a normal eater to a very greedy, ravenous eater.

This then places the dog in the category of a greedy eater (more likely to eat poop) as a result of an internal parasite (an external source that affects the dog's normal behaviour).

A simple way to deal with this is to ensure you worm your dog at least four times per year. Parasites that are already present in a dog are not good. If those parasites then lead the dog to eat other animal poop, the situation gets worse for the dog and his / her owner.

To cure poop eating in dogs we apply the same behavioural intervention techniques we would use to adjust any other unwanted canine behaviour. You first understand why do dogs eat poop if they're neither hungry or ill, then move on to a solution for the problem.

If you are concerned that your dog is displaying unwanted behaviour as a result of boredom or lack of stimulation, read this:

Is my dog bored (and 3 simple tests to find out)

In this short video you can learn a really simple, effective way to teach your dog how to understand 'leave it'. This is the command to using when training a dog not to eat poop. It works.

Are there any products that can stop a dog eating poop?

Yes. In fact there are quite a few. But if you're here having asked the question, why do dogs eat poop - because your dog is a poop eater, a word of warning on products that claim to cure poop eating in dogs.

Behavioural modification is a much more effective way to stop a dog eating poop than some magic-bullet in a product form.

In short, if you want a dog to stop eating poop you need to teach them.

Further reading on why do dogs eat poop: