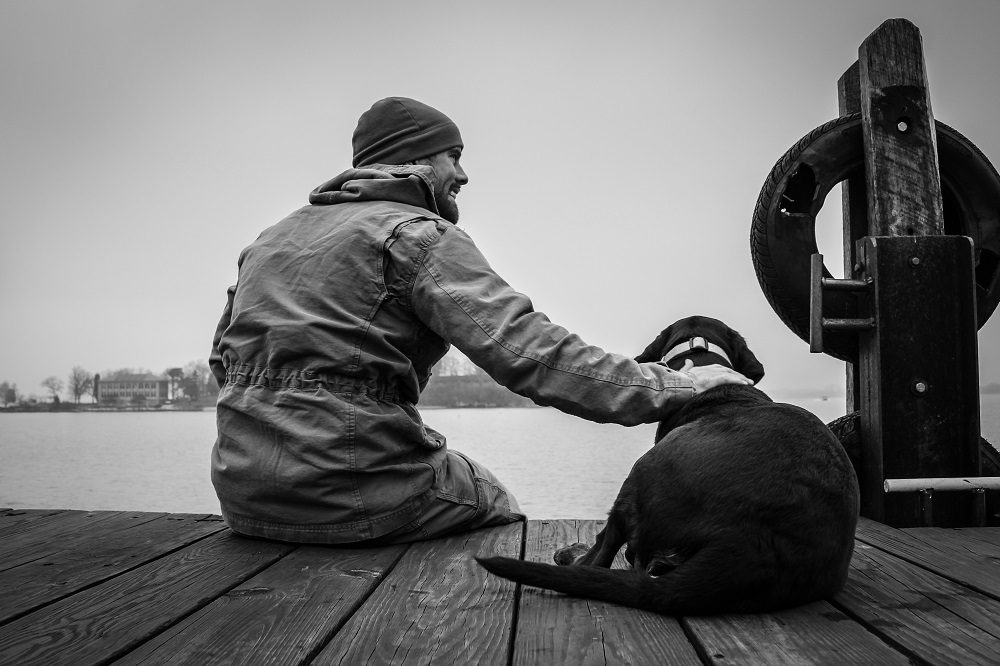 I’m no expert in mental health, nor animal therapy, but I’ve fought a battle with depression for years and the best therapist I’ve come across was my faithful Labrador, Bella. I’m not doubting the benefit of educated, licensed human therapists, but rather speaking on the power of a relationship with a dog.

Dogs may not have a master’s degree in social work or a doctorate in psychology, but they don’t need them either. I learned with Bella that dogs have something built inside of them that can perceive changes in energies and moods perhaps before we even notice they’ve changed, writes former marine, Rob Kugler.

If I was sad, Bella would bring me a toy to play tug-o-war with and distract me from my sour mood. If I was angry, Bella would nudge me with her snout, asking to be pet. Touching her shiny brown fur and scratching her ears as she leaned into me would comfort me and calm me down. If I was happy, well, Bella would just be all the happier herself and our energies would complement each other in ways that would light up the night sky.

A large part of that bond is their unwavering loyalty.

Like a Battle Buddy in the military, a dog’s mission is to be by your side through every situation, every storm, every peak and valley.

No matter how high or how low, Bella lived to be by my side at every opportunity, and she did so with such verve, such joy, such happiness. It was nearly impossible not to be in a good mood whenever she was around.

That’s partly why I never wanted to be apart from her. She brought out the best in me, and I was proud of the man I was with her. She didn’t just bring the fetch, fun, and tail wags, she also brought purpose and accountability. You need to be there for a dog. You need to make the decisions for a dog that they can’t make themselves.

Through acts of service, we become better human beings, and as our dogs give us unconditional love, we serve them by not only loving them back, but by feeding them, walking them, playing with them, bathing them, and taking care of their medical needs.

When I’m alone, caring only for myself, it’s easy to neglect my own care and wallow in sorrow and self-pity. But, when I had Bella, and now Max, there is another life that I am responsible for, and it’s a big responsibility. When we take on a pet, we are responsible for every aspect of that animal’s life, from beginning to end. It’s a beautiful thing, really, because it gives us an opportunity to give another living, breathing being the best life possible.

In times where I thought my own life may not be worth living, my duty to give Bella her best life truly gave me a renewed sense of purpose. I often thought to myself, “While the modern world is so busy chasing success, what could I do that’s more successful than giving this dog the best final months of her life?” Little did I know how much that would change my perspective as well.

Before Bella, I had a love for animals, but not to the level that Bella taught me. Watching her go through the stages of life, and looking into her soulful eyes over the years that our bond continually grew stronger, I had no doubt in my mind that whatever is inside of me that makes me who I am, a spirit, a soul, unexplained cosmic energy, Bella had it, too.

Understanding that, shifted my perspective on dogs, other animals, and the entire world. It made me feel more connected to all living things, and perhaps even opened my eyes to see a bigger, more connected world that we live in.

Rob Kugler adopted his chocolate Labrador, Bella as a puppy. A bundle of fun and love, who could keep his girlfriend company while he headed off to fulfil his duties in the military.

When his life fell apart, it was Bella who was there to help heal the wounds, and who made Rob’s life worth living again. So when he was told that Bella had cancer – first in her leg, which had to be amputated, and then in her lungs – he was devastated.

With only months of Bella’s life left, Rob knew just what he had to do for his furry best friend. Determined to show her the same unconditional love she had always shown him, Rob decided to give Bella the farewell adventure of her doggie dreams. Criss-crossing the USA from coast to coast, making new friends from every corner of the globe along the way, Bella taught Rob never to give up and always to live each day as though it’s your last.

Rob shares his story and unbreakable bond with Bella in his new book, ‘A Dog Named Beautiful’, which is published by Bantam Press on 21st March 2019, RRP £16.99.

Pete Wicks joined ‘The Only Way Is Essex’ in 2015 and since then hasn’t really been out of the headlines. But he admits he’s...

Not all superheroes wear capes, not visible ones anyway. For some, it’s sewn into the fabric of who they are. Some people may not...