Schnauzerfest began life in 2014 as a social media based network of Schnauzer loving people getting together for a series of fundraising dog walks around the UK. That first year, all walks were held over one autumn weekend and it was thought that around one or two thousand pounds might be raised - the fund closed at almost £8000!

Since then, every year Schnauzerfest has grown, both in terms of the money raised and in awareness of pet rescue and puppy farming. Through grassroots support, Schnauzerfest has raised over £206,000 in just six years, writes Janetta Harvey. 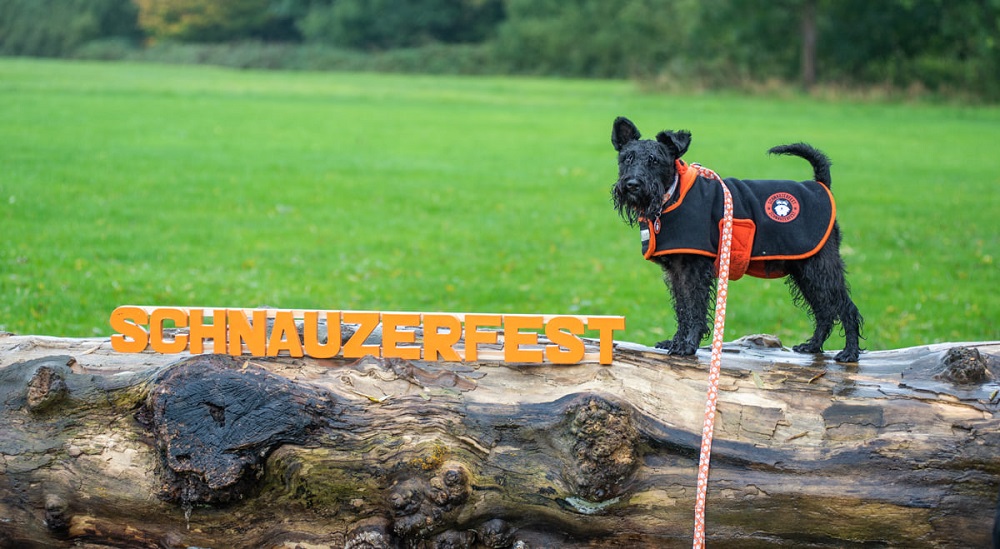 Many dogs’ lives have been immeasurably improved and, in some cases, saved by this phenomenal fundraising. The money goes towards paying veterinary bills for dogs in rescue. In the main, they’ve been saved from puppy farms and other bad breeding backgrounds. Schnauzerfest fundraising has restored the eyesight of many Schnauzers blinded by cataracts. Cataract surgery can cost upwards of £2000 per eye which puts it out of financial reach for many rescues.

The majority of the money raised by Schnauzerfest has been given to the Diana Brimblecombe Animal Rescue Centre (DBARC), an independent rescue which every year takes in many animals including saved breeding dogs. They often have complex physical and psychological problems and it can be many months with lots of veterinary treatment and rehabilitation before they are well enough to be adopted. Schnauzerfest fundraising takes away much of the financial worry for DBARC. This enables the dogs to receive all necessary care, so they begin their new lives with the best chance possible at good health and in those cases where it’s possible, with restored eyesight. 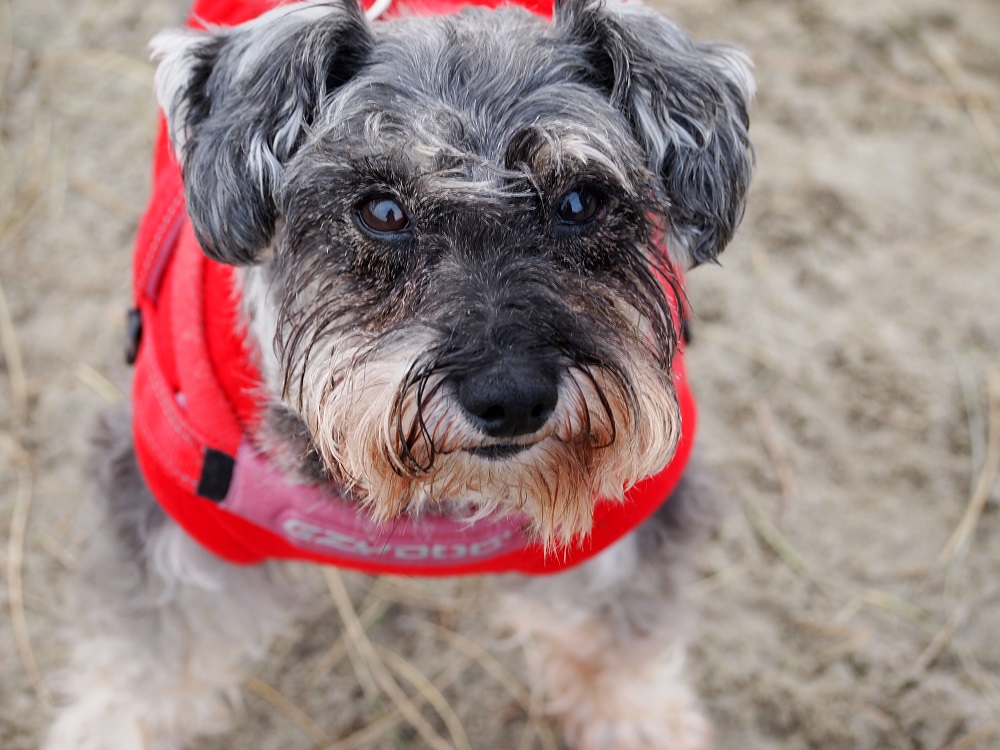 I began Schnauzerfest after adopting Susie-Belle, my first rescue dog after she’d spent six months in the care of DBARC. She’d survived eight years in a puppy farm being forced to supply the lucrative trade in puppies. It nearly killed her.

She had multiple health problems when rescued including a prolapsed, infected womb, dreadful skin, eye, ear and mouth infections; she had cataracts in both eyes, was emaciated, almost bald and had no trust of humans nor recognition of kindness, having experienced a lifetime of neglect and cruelty.

DBARC gave her all the treatment she needed, including cataract surgery so that by the time she came to me, she was a dog well on the way to living a far more normal life. One with sight and reasonably good health for the four years we shared before she died in 2015.

‘Schnauzerfest is Susie-Belle’s legacy, everything we do, we do in her memory’

Schnauzerfest is very much a collective effort. It’s a simple idea executed by many people every year.

Volunteers organise walks in their local areas in October and December, following a simple model. We keep everything straightforward for hosts and those taking part in the walks - the aim is to have fun being out walking with our dogs, something puppy farm dogs are denied. 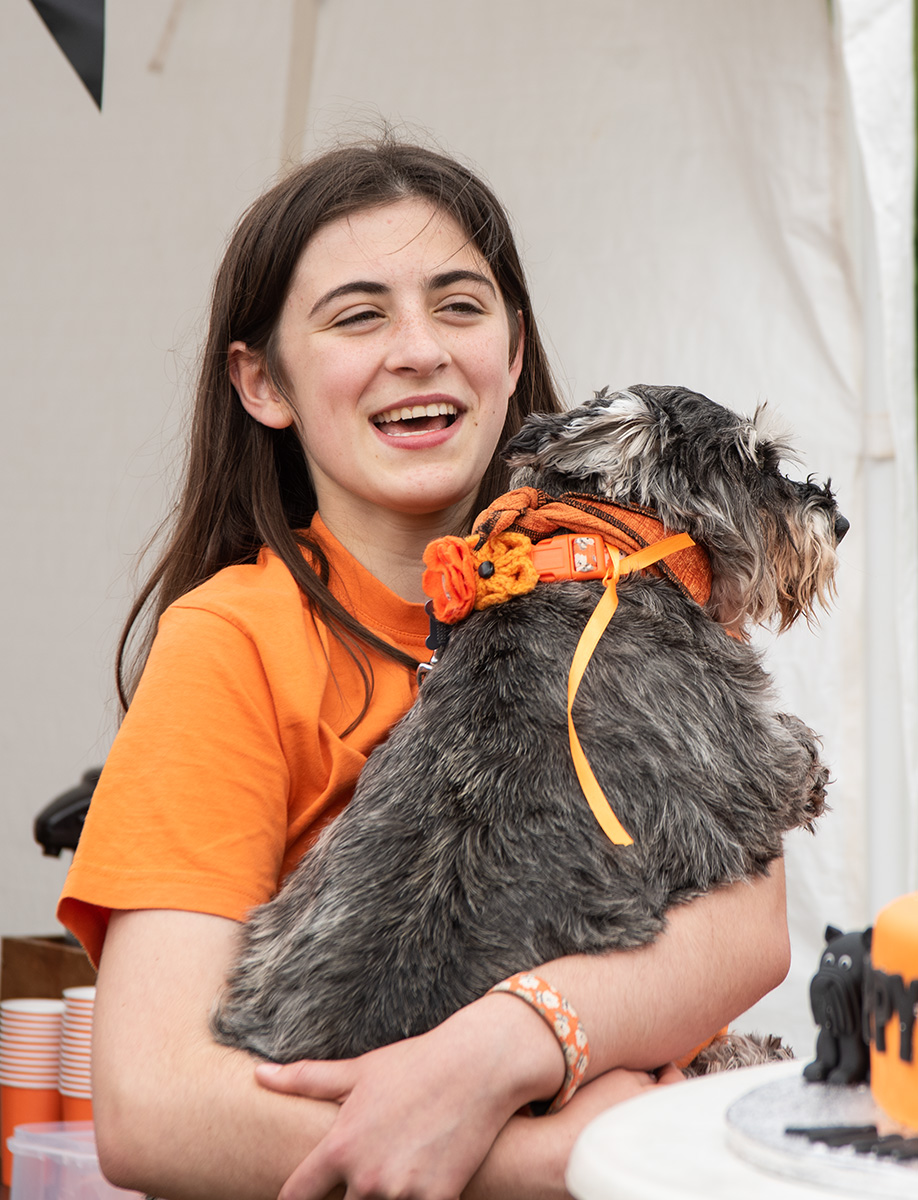 For Susie-Belle her happiest moments in our early months together when everything was alien to her, were when she was out walking. She could be herself, a normal dog, using her senses, enjoying fresh air, with the freedom to potter about and do as she wanted. Schnauzerfest walks celebrate this simple pleasure which dogs bring us and which we share with them.

With the level of success and fundraising which Schnauzerfest has achieved comes a serious responsibility. We must ensure that what we’ve created together with Schnauzerfest continues to do what we always set out to achieve: to support and facilitate excellent rescue work and to educate on puppy farming.

So it was decided earlier this year that the time had come for us to apply to the Charity Commission of England and Wales to register Schnauzerfest as a charity. We’re delighted that after months of work and patiently waiting to hear, at the end of October it was confirmed that the application was approved and Schnauzerfest became a registered charity.

This is brilliant news for everyone who supports our aims and what Schnauzerfest does every year for dogs. Being a registered charity means that everything we’ve done so far will continue, but with new avenues being open to us, even greater things will now happen.

Our steadfast commitment to supporting the work of the Diana Brimblecombe Animal Rescue Centre will remain and strengthen as plans we’re working on become reality.

We will also be in the position to help others which meet our requirements to receive a Schnauzerfest Grant. The fundraising which every supporter of Schnauzerfest makes possible will continue to pay for the veterinary treatment of dogs saved from puppy farms and other bad backgrounds. 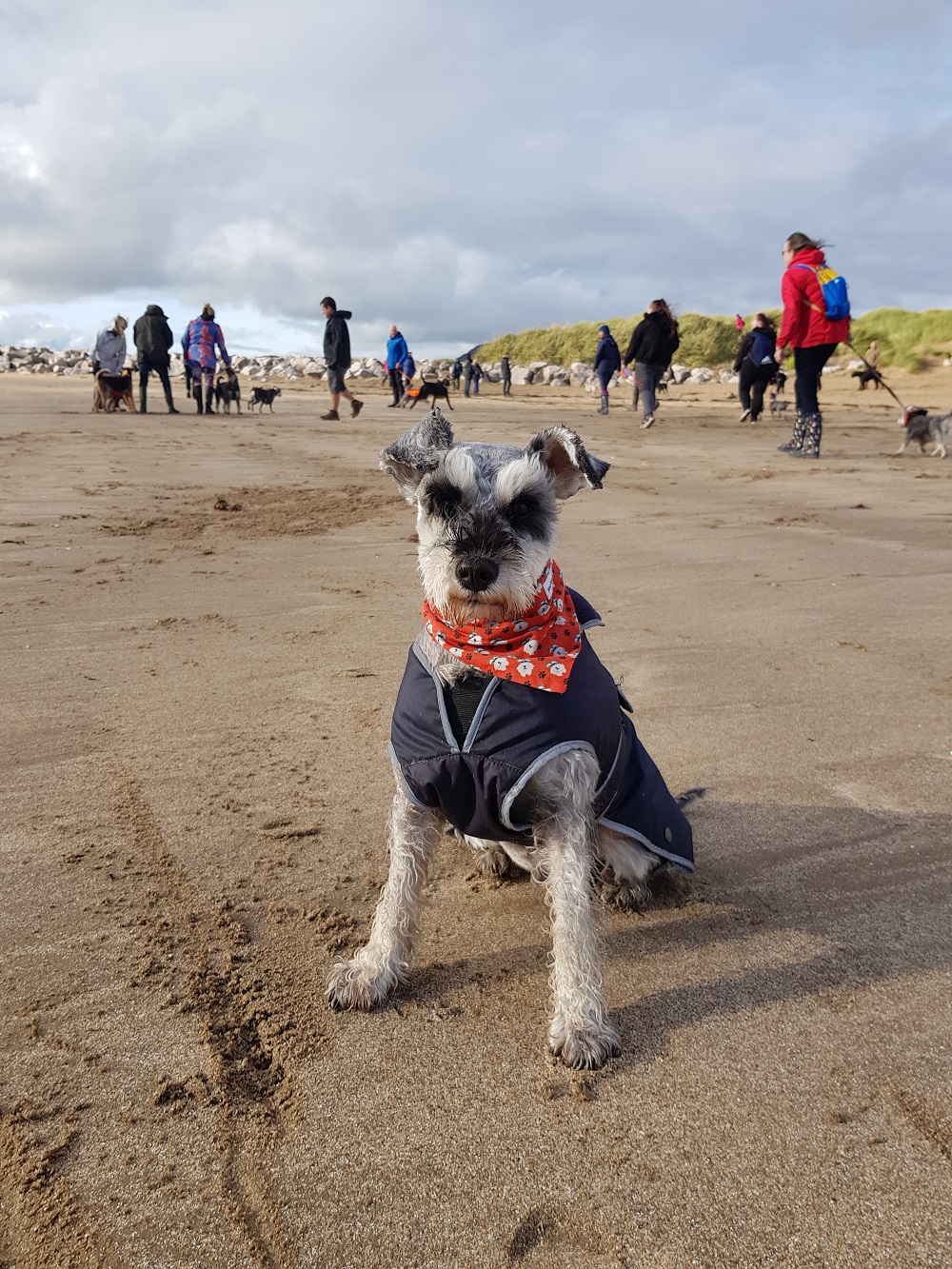 Each of the five Founding Trustees of Schnauzerfest have personal experience of adopting dogs. The 'Schnauzerfest Constitution' makes clear that our objectives include educating the public on puppy farming and animal welfare and all Trustees feel strongly that this must go alongside fundraising.

“I have a lifelong love of dogs and Archie was my first Schnauzer, after losing a Standard Poodle and a Welsh Terrier in the same week. After watching a shocking TV programme on puppy farming, the details of which stayed with me and really brought home how horrific the industry is, I adopted Isla, one of the fortunate few who get out of puppy farms. Sharing our life with her, I recognised first-hand how deeply harmful puppy farming is for dogs and wanted to get more involved in doing something more to raise awareness.

“I got to know Janetta Harvey and adopted Mabel in Susie-Belle’s memory. Following years of neglect in a puppy farm, Mabel was in a dreadful state when rescued, both physical and emotional, including losing an eye and having poor sight in her remaining one.

“The financial support that Schnauzerfest offers those rescuing and caring for dogs like Mabel and Isla is life-changing and I am honoured to be a Trustee.” 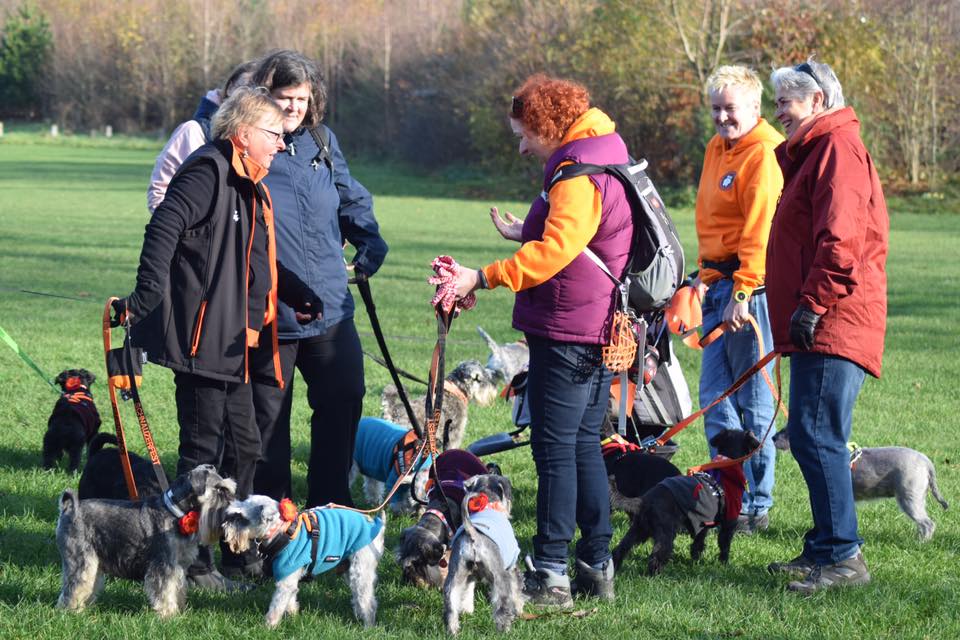 The Charity will continue to run on a fully voluntary basis with every penny going to help the dogs. Being a registered charity helps to protect the money, the nationwide nature of Schnauzerfest and what we do, and gives us even more opportunity to push forward with educating the public.

While the level of fundraising which Schnauzerfest brings each year is substantial, so are the veterinary bills which rescues face today. Especially those like DBARC which take in dogs with complex problems, the extent of which are often not initially known.

River, a Miniature Schnauzer saved from a puppy farm in October 2017 illustrates this. As well as the typical infections, skin, dental and psychological problems which DBARC are familiar with when dogs come out of puppy farms, River had even more complicated issues. It was to be several weeks before they were fully identified by specialists. 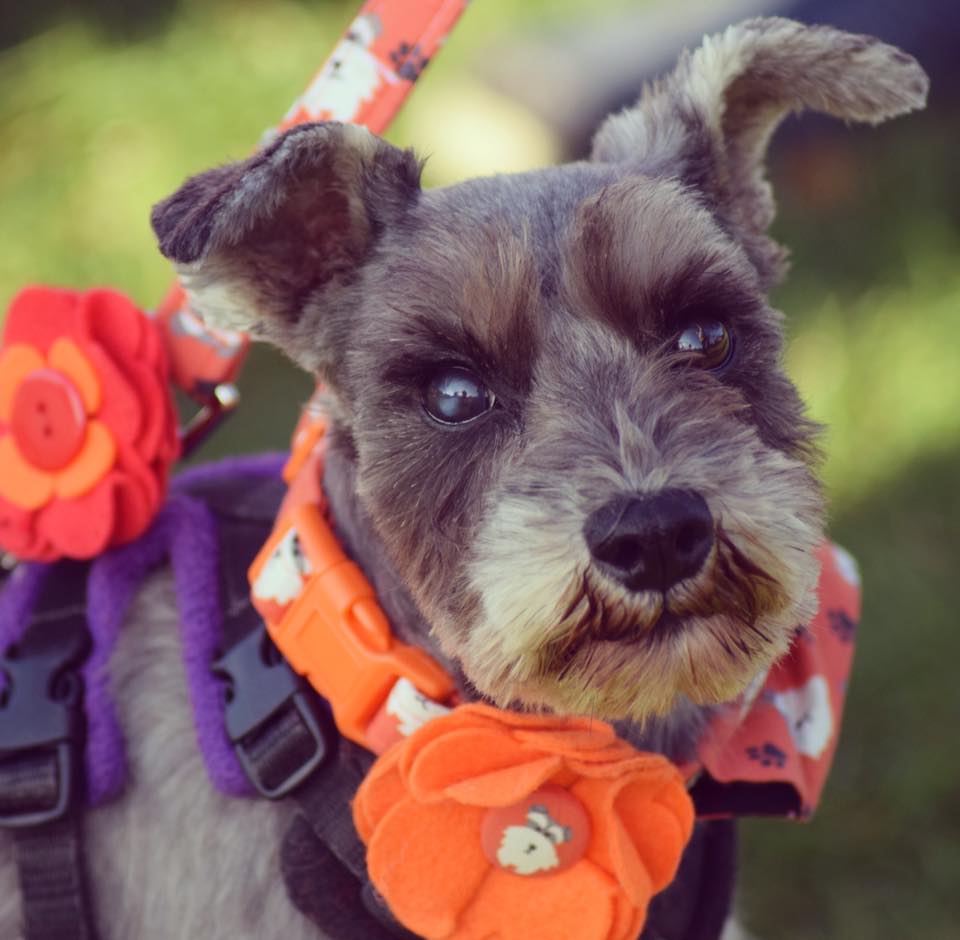 It turned out, after extensive – and expensive – investigations which included a CT and MRI scan, that River was born with a condition which affected the bones in her neck. The atlantoaxial subluxation (AAI) causes neck pain, an abnormal holding of the head position, weakness in the limbs or inability to use them. The problem in the bones had been compressing her spinal cord and could at any time have caused a catastrophic event ending in paralysis. For a dog who had lived a number of years in the stark, lonely world of a puppy farm, it must have been horrific.

Surgery was the only option for River. The odds given for her surviving the surgery were scarily low. For a dog like River, in rescue, with no possible insurance in place, the only option, if donated funds weren’t available, would be to put her to sleep.

What Schnauzerfest fundraising offers a rescue like DBARC is support when it is really needed. River’s treatment went ahead, followed by months of rehabilitation. The final bill to save her life came to around £10,000. This is what Schnauzerfest makes possible and with its charitable status will continue to do in greater ways for years to come. 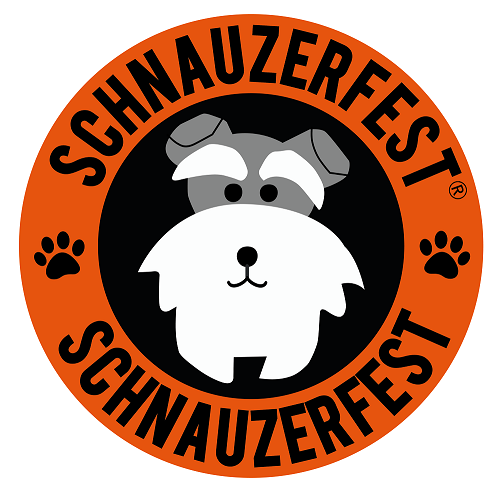 Alongside me from the start with Schnauzerfest has been Kate Mitchell, now a Trustee and Treasurer. She adopted Darla, foster sister of River in 2018.

Kate explains her role and why Schnauzerfest is important.

“A Credit Manager by profession, I took a step back to less full-on roles after redundancy which enabled me to get my longed-for first Schnauzer, Rodders, in 2011. We’ve since added to our family with Creggan in 2013 and Darla who was given the gift of sight by Schnauzerfest 2017 funding.

“At our very first social Schnauzer walk, Rodders and I met Susie-Belle. Through her and Janetta, I’ve learnt so much more about the horrors of puppy farming, the need to spread awareness and raise funds to deal with the aftermath. 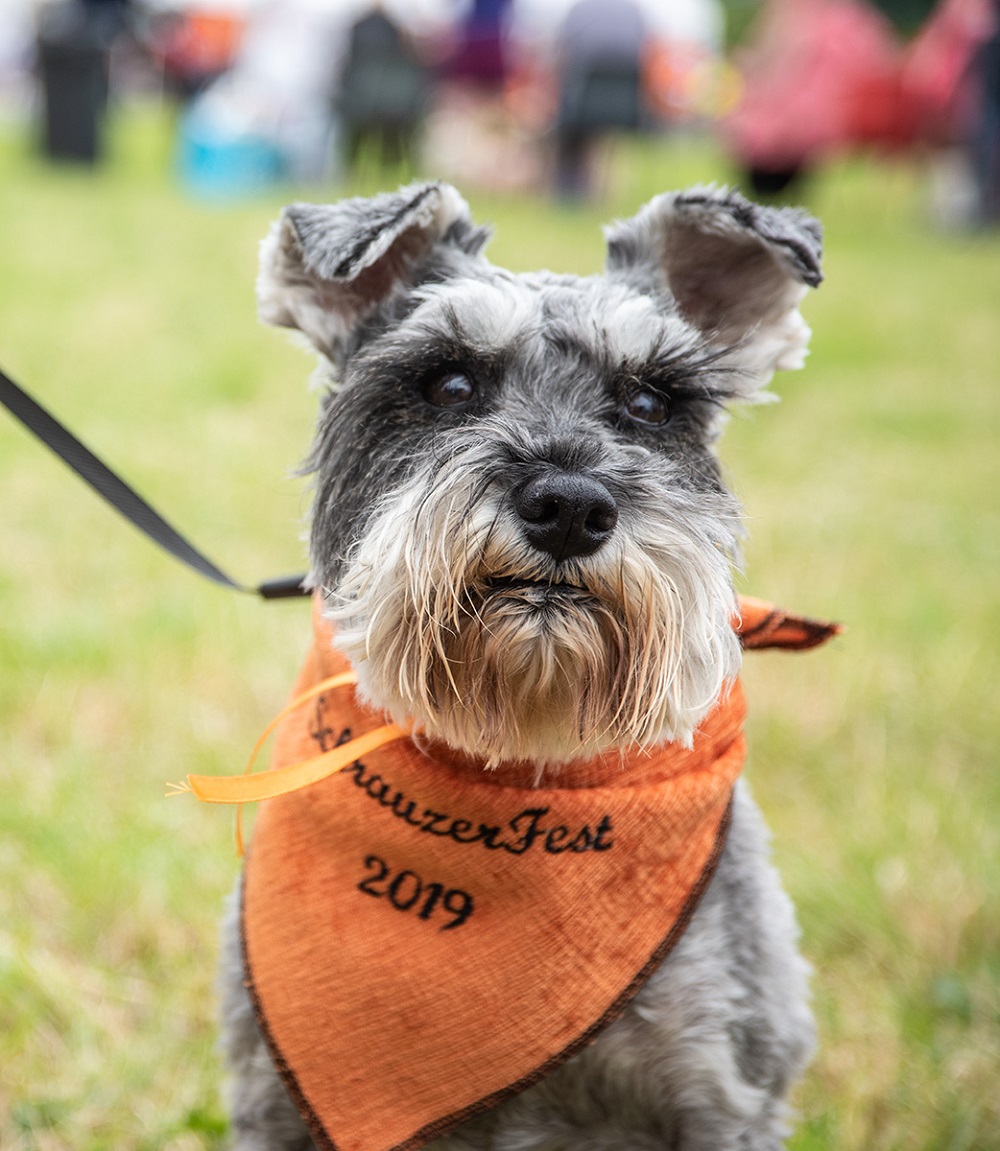 “I came on board the day Janetta decided to set up Schnauzerfest in 2014, when we thought it would be a one-off, perhaps raising a grand or two! People loved the idea and we were asked to repeat it.

“I beaver away behind the scenes, with my many spreadsheets, keeping track and making things work and ensuring we're always accountable. Schnauzerfest has grown year on year and I’m excited by the opportunities offered by it being a registered charity.”

While the main fundraising walks are held over an October weekend, by popular demand we also have walks during our fun Schnauzerfestive Season which runs from December 1st through to January 6th.

Now in its second year, walks will be taking part around the country, hosted by volunteers. We always welcome new hosts who want to get involved either with our Schnauzerfestives or our main October walks. Being a Schnauzerfest Host is fun and makes Schnauzerfest possible, hosts return year after year, everyone loves it!

Discover The Fascinating Origin Of These Dog Breed Names