Over the last few years, police dogs have been celebrated more than ever, thanks to the efforts of the family and friends of a police dog named Finn who was stabbed while working. In Finn’s name, campaigners fought to introduce new legislation that now means causing unnecessary suffering to a service animal is an offence in England and Wales.

We wanted to find out more about what life is like for a police dog so we spoke with PC Chris Green from Cleveland Police’s dog unit, who you might recognise from the Channel 5 hit show ‘Police Interceptors’.

Chris told us all about life with Ronny, his now retired police dog and why being a police dog handler is really more of a vocation than a career. 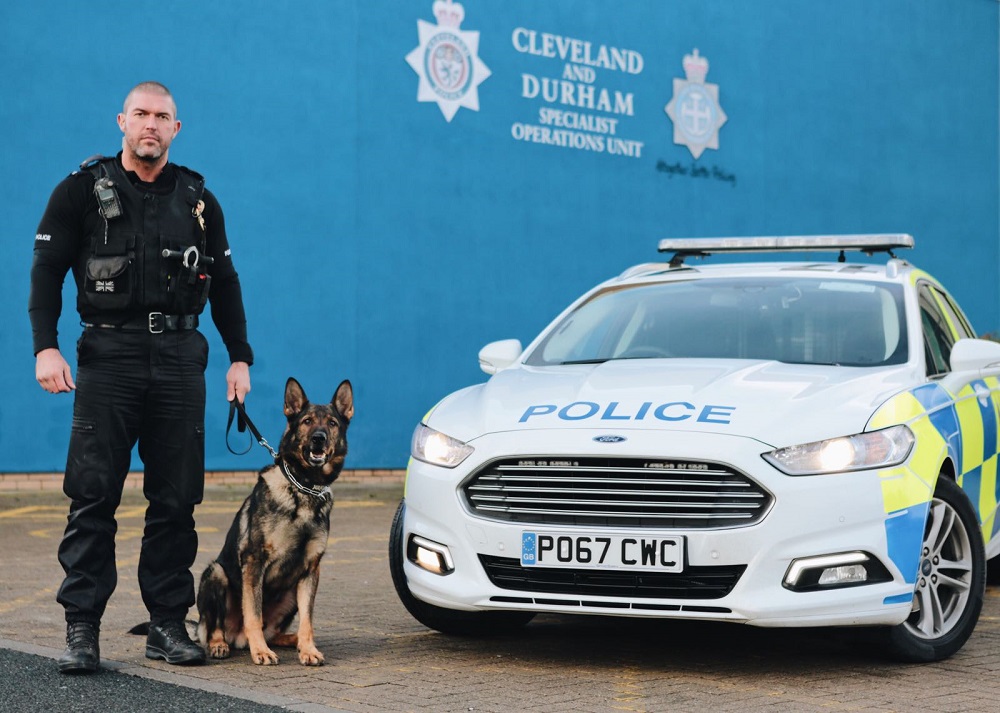 Chris and Ronny at work

"He came to the force and was deemed suitable to start his general purpose initial course, showing good maturity for his tender age. He had strong prey and defence drive, was social and eager to learn.

“Despite the high drive, he always showed great balance and character. He was licensed at around 12 months old - most dogs don't even start full training until they are six months older than this.” 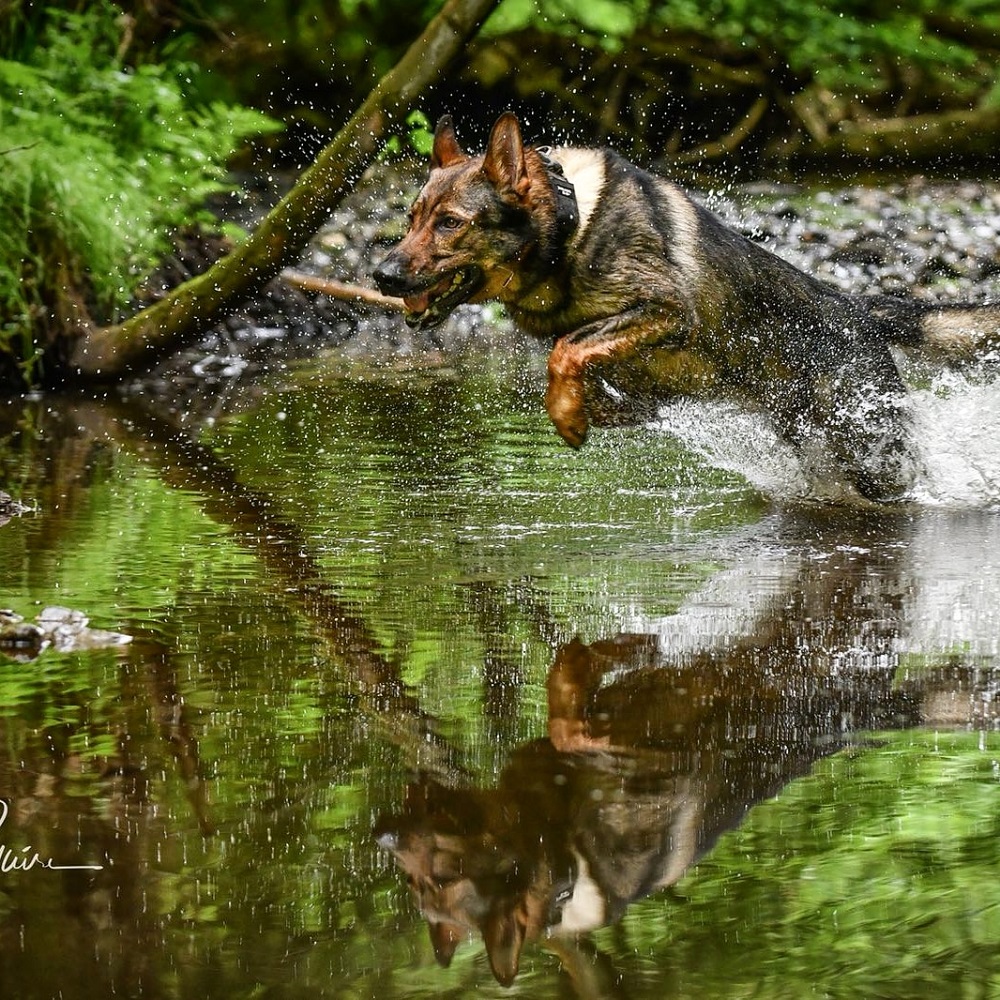 “Life as a dog handler is unique. It’s more of a vocation than a career.

“You take your work home with you, you have to have a certain type of car to transport the dogs, you're out in all weathers, you have to take the dogs into account if you want to go out for the day, you don't get to sleep in on your rest days, you have to plan your life with much more forward planning.

“Last minute trips don't happen. However, you get to work with an animal of immense courage, bravery, intelligence, loyalty and a zest for life. You grow as a team, you develop a bond that is like no other, a bond that could result in the dog laying down its life in order to protect you. 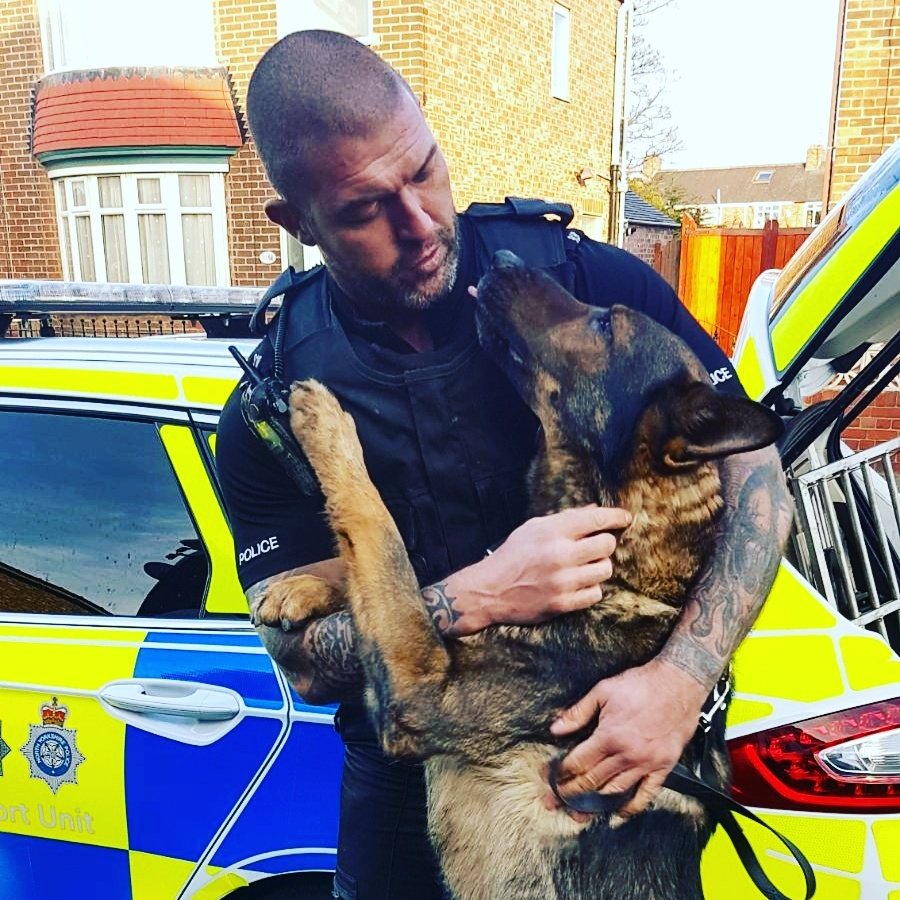 “You have to help nurture them, guide them as they develop from training, into the big world of shifts, blue lights and sirens, violence, friends and foe. You see their mistakes and you try to rectify them, allowing the dog to get a positive result after a negative.

“You watch the dog grow in confidence, you see them become wiser, you know every little bit of body language, from a lifted tail to a turn of the head - you are a team, both less effective without the other half.

"There’s a reason why many an instructor will say "always trust your dog". Many a handler will laugh at this, as we have all doubted it only to be proven wrong! 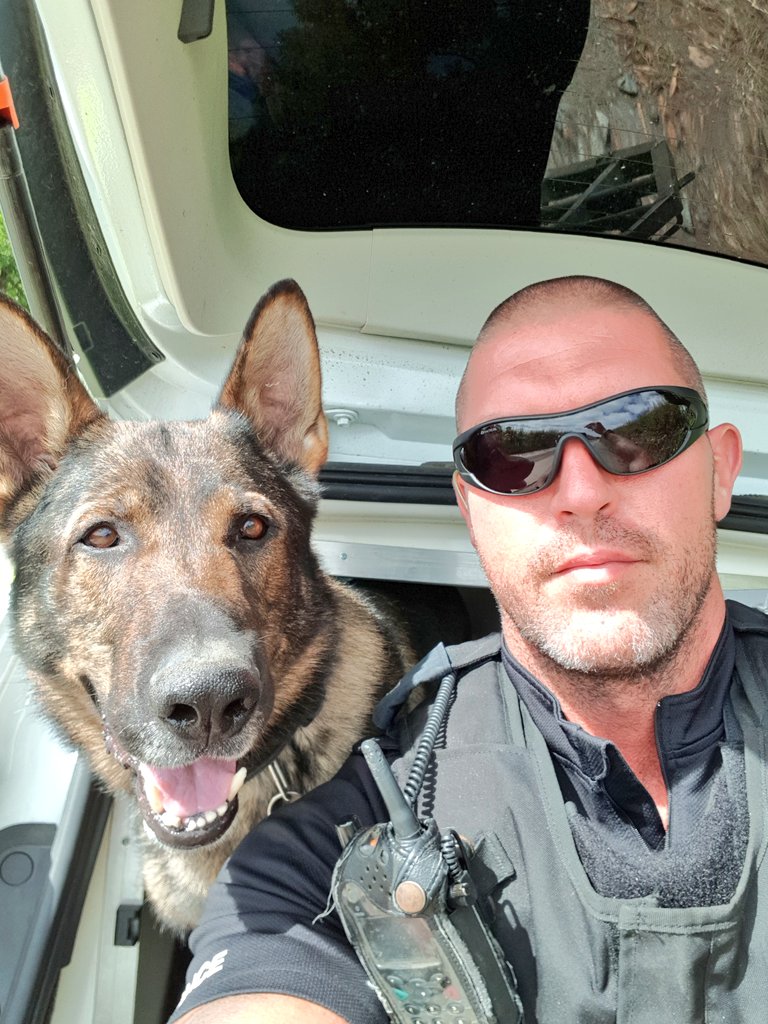 “There is no better feeling than finding a suspect or missing person when every other method has tried and failed, knowing that without you both, the person wouldn't have been held accountable for the crime or the vulnerable person may have died.

“It is like having two different dogs. A serious, high drive dog when at work, eager to track the fleeing criminal, to detain a violent offender, yet when they are at home with you and your family, they settle and relax like any other dog. They want to play, they want a cuddle, they want interaction just like any other pet dog. They are able to separate the two parts of their lives and this is a huge credit to the wonderful characters that the best police dogs possess.”

“Thankfully having Ronny to work with, we had numerous jobs that I look back on fondly for varying reasons.

“Finding the person who had failed to stop and then rammed my police car was particularly satisfying as without the dog and his extraordinary sense of smell, that person would have remained secreted until we got bored and left the scene.

“Another job of note was a male who had been wanted for approximately 24 hours, he had been causing a lot of issues for colleagues in Hartlepool and had threatened to harm himself, so a large number of resources had been tied up trying to locate him. 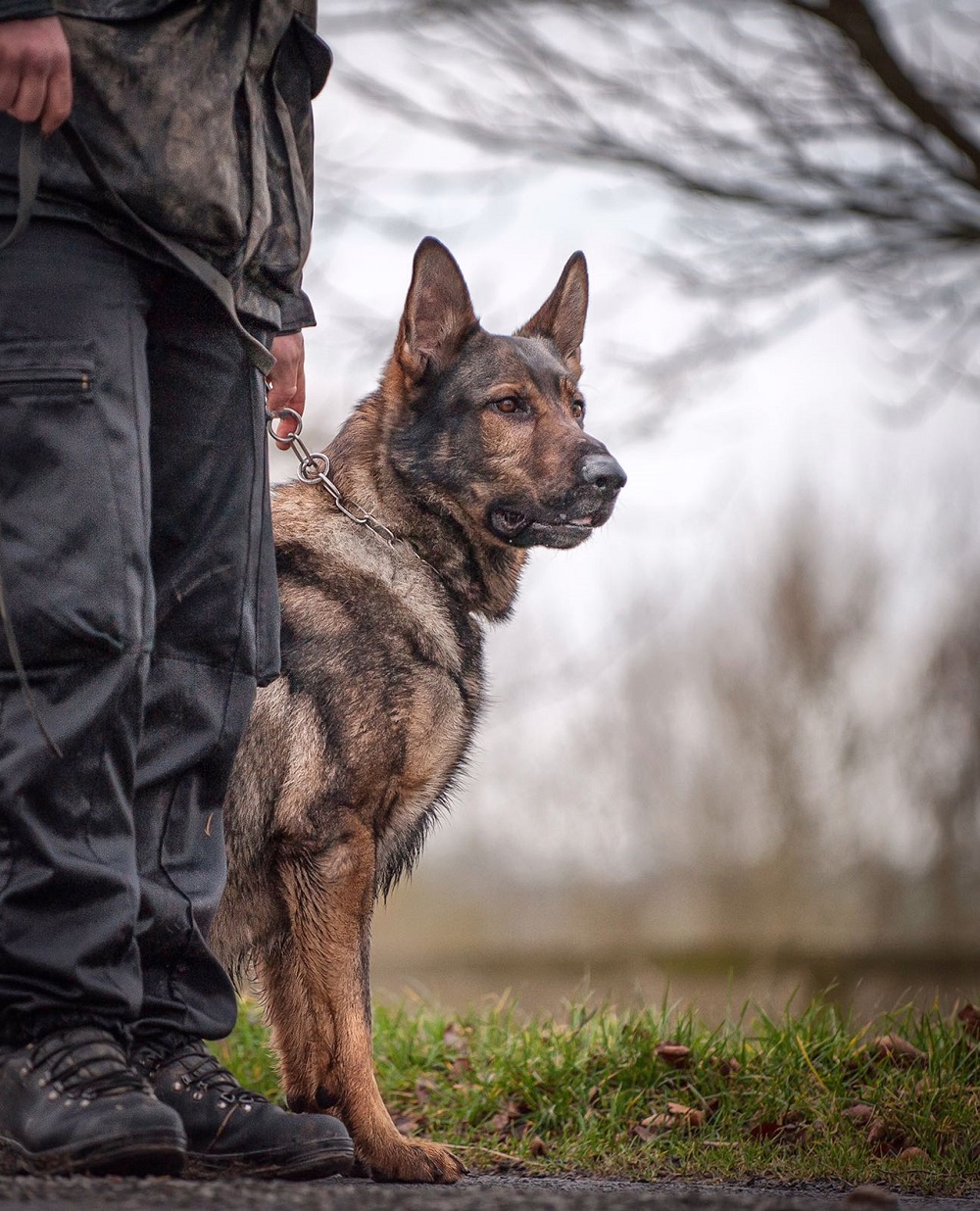 “There had been a brief sighting of the male and I had been asked to attend the location sometime later with Ronny. They had seen him make off down an alley and it was suspected that he may have made off over a fence towards school grounds, albeit a good while before, so it was more of a rough area search to tick the boxes.

“I deployed Ronny on his tracking harness and made our way along a dark alleyway when suddenly his body language changed and he made his way towards a wall which went into a large, pitch black garden area.

“Due to the length of time since the sighting, I fully expected to continue the search on the other side of the wall as I presumed the male would have continued his journey away from officers. I assisted Ronny in getting over the wall, only for him to land right on top of the male who had secreted himself in some bushes. The male was subsequently arrested and the tasked policed units could be freed up to continue their duties. In short, the nose knows!”

“Unfortunately last September Ronny was diagnosed with hip dysplasia in his right hip joint. Despite him still having the drive and determination to work through the condition, I felt it was unfair to continue to put him through the rigours of training and operational police work where I couldn't dictate what jobs we would be deployed on.

“Ronny lived to work. He was a very special dog, both in a professional and personal capacity, so his welfare had to be my first priority. This was made even more difficult based on the fact I knew I wouldn't be able to keep him in retirement.

“He wasn't an old dog that might be happy to curl up in front of a fire. He needed stimulation, space and a home used to having dogs of this nature. I didn't want to see him left in my kennel while I took a new dog to work for 12 hours a day, he deserved more than that. He deserved the best retirement I could find him.

“This was found with a gamekeeper who had previously taken on retired police dogs. He had the land and the outdoor lifestyle that was so important for me, but more importantly, he knew how much Ronny meant to me and what a special dog he was inheriting.

“Ronny has lived the farm lifestyle for six months, he is thriving and is well settled. He gets plenty of exercise, goes out with him to work, has the company he enjoys and the gamekeeper absolutely loves him.”

“The day I handed him over, I met him at the field, let Ronny out of my car and all three of us went for a little walk. I had a fuss with him, passed the gamekeeper a ball and asked him to throw it for him. Once Ronny went off chasing it, I sloped off to my car, tears welling up and cried most of the way home.

“I'd have loved to have said a proper goodbye but if I’m entirely honest, I’m not sure I would have followed through with it had I done that and the home was too good to miss. I couldn't be selfish with this decision. 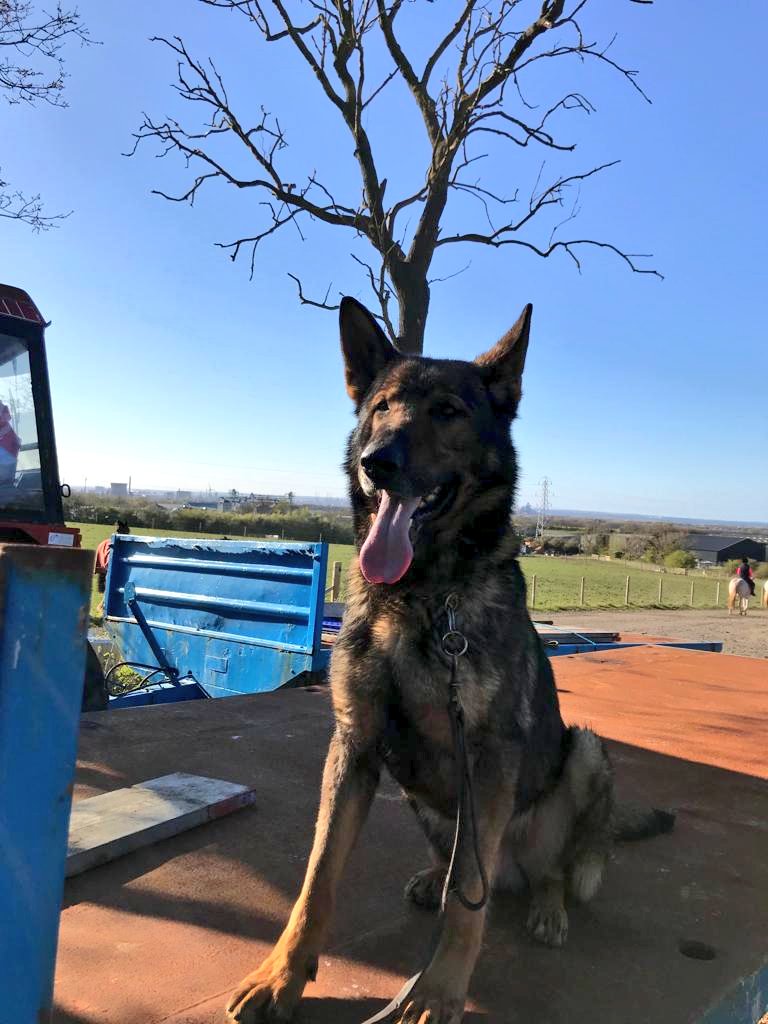 Life on the farm for Ronny

“I get regular texts, photos and videos which is more than I could have asked for. Ronny looks fit, healthy and happy, exactly what I wanted for him and hopefully my decision to retire him early has given him a much longer and healthier retirement.”

“Following his retirement, I was in need of a new dog so I spent a couple of months searching for a suitable candidate and after a couple of non-starters, I was lucky enough to find Harley, a 12-month-old Malinois who happens to share the same birthday as me! 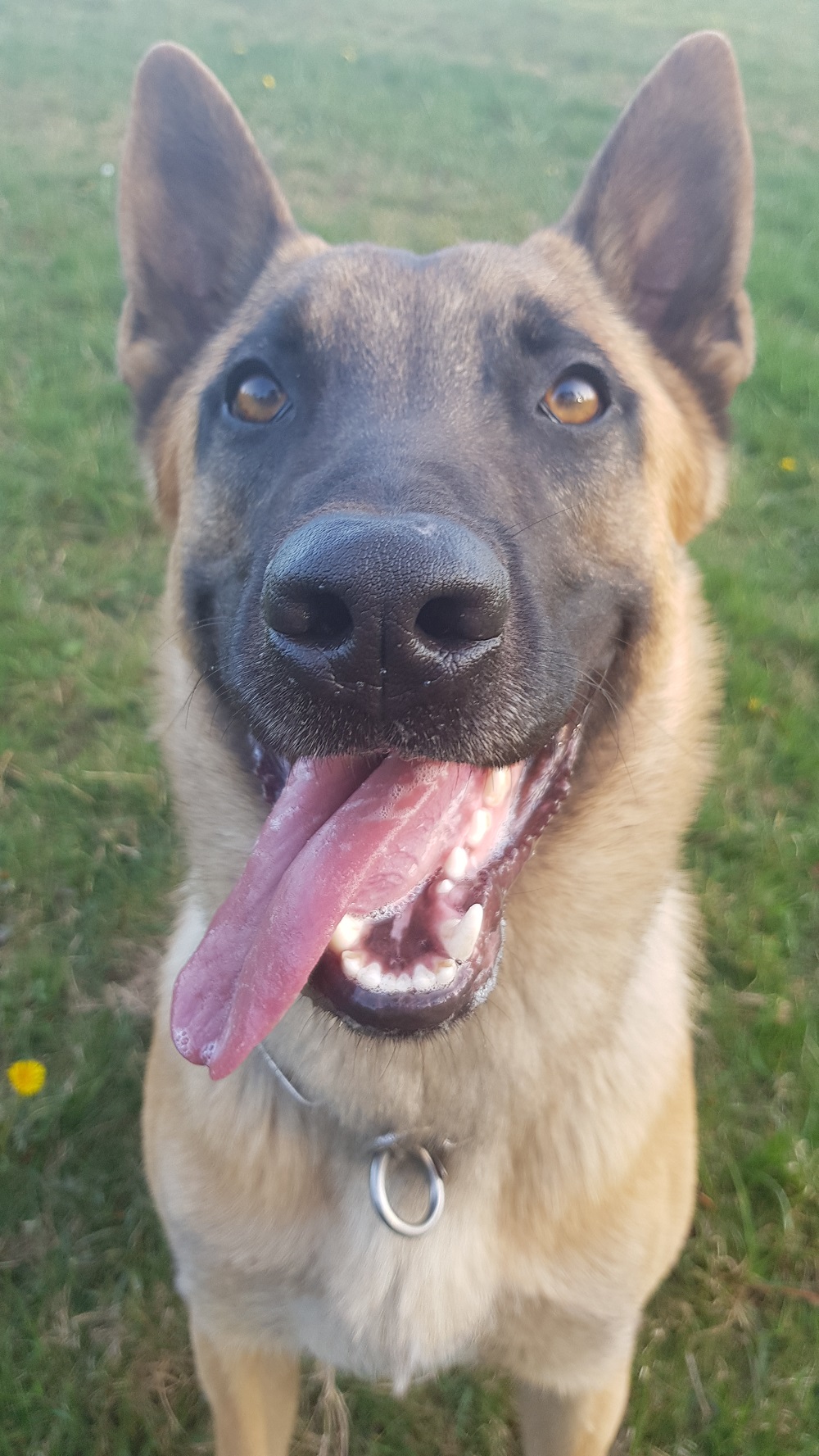 “He is now 16-months-old and due to start his initial course in May. He has helped me massively dealing with the retirement of Ronny by giving me something to focus on and to make him as good as he can be, hopefully following in the success of the big man himself.” 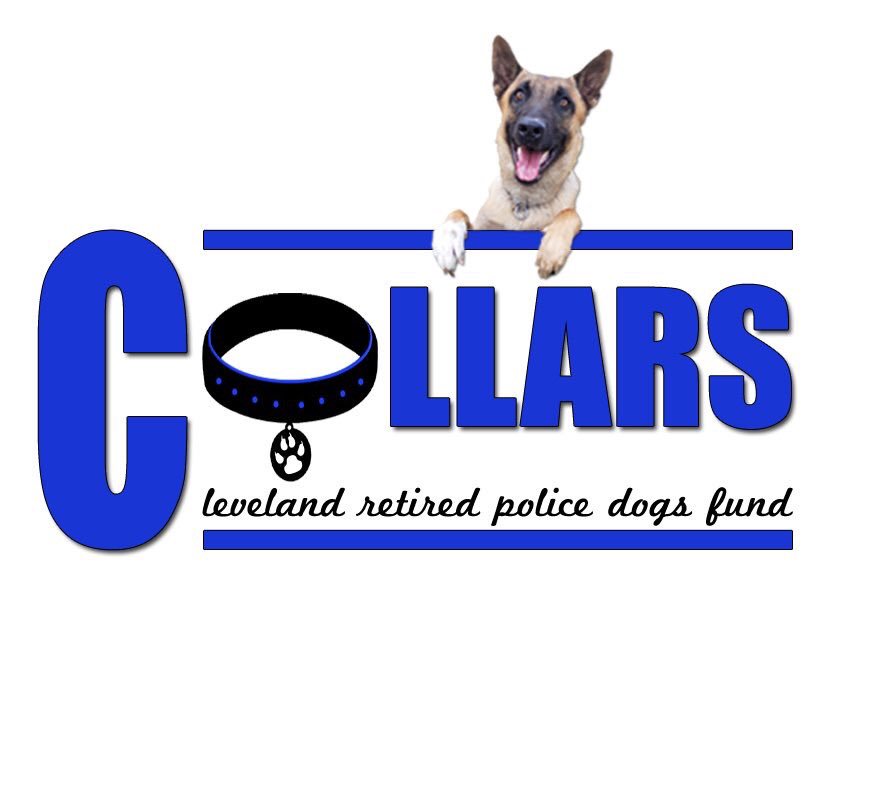 Chris is working with COLLARS (Cleveland Retired Police Dogs Fund) to offer support to retired dogs, such as Ronny. Keep an eye on his Twitter account for news.