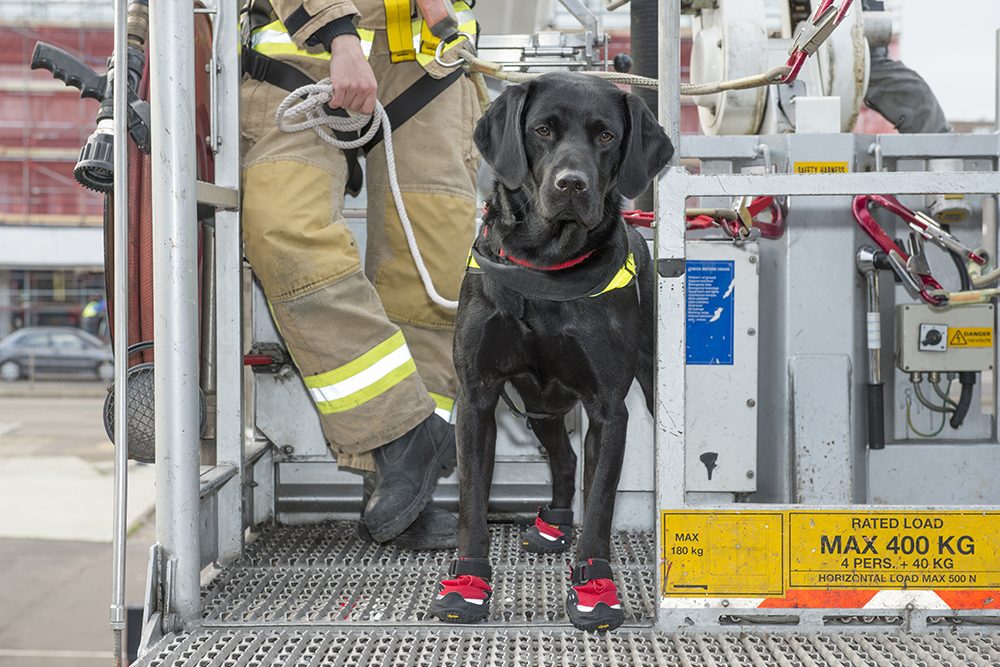 Not all heroes wear capes, some wear special boots and work for the simple reward of a tennis ball.

Their job is to search the scenes of fires and their surrounding areas quickly and efficiently, highlighting areas of interest that samples should be taken from, helping to gather potentially vital evidence which rules in (or out) crimes, such as arson.

What makes the dog ideal for this job is the speed at which they can search, powered by their nose. In some cases, what may take them a few hours would take humans days or even weeks.

Their handlers shared with us some of their most memorable rescues and what makes their dogs truly amazing.

Nikki Harvey is a Fire Investigation Dog Handler for Hertfordshire Fire & Rescue Service. Her dog, Reqs is a Labrador.

She tells us about the time he saved another dog’s life.

“Reqs’s highlight of his career was rescuing a Collie dog from under a rubble pile following a house explosion that we were assisting our fire investigation colleagues with in Essex Fire and Rescue Service.

"The dog had been missing for 3 days and it was only when we attended the scene that the Collie was located alive and well by Reqs during his search.”

Pictured above, Carrie, the Collie Reqs discovered in the rubble

Mat Dixon is a Fire Investigation Dog Handler for the West Midlands Fire Service (WMFS). His dog, Kai is a Belgian Malinois.

He tells us about the time Kai discovered two kittens in amongst the remains of a house fire.

“Kai found two kittens in a burnt out house, they were hiding and Kai kept sniffing at where they were, I investigated, discovered them, (unharmed) and we put them in a police car and notified the owners who came and collected them.”

Mat also shares a story about one of his one of his previous working dogs, Ellie.

“I attended a house fire in which a dog had tragically died, we had removed the dog and placed him under a sheet in the front garden, I searched the house with Ellie, her behaviour visibly changed when she searched the area the body of the dog had been recovered from.

“Upon completion of our search, Ellie made her way to the front garden of the property. I found her there, lying, with her head resting on the body of the deceased dog, she stayed there for several minutes before returning to my side and pressing herself, harder than usual, against my leg, it was as though she’d comforted the dog, said her piece, wished him well and seen him over rainbow bridge, before returning to me for some comfort of her own.

"I’d like to think he was waiting for her when she crossed the rainbow bridge herself and showed her the ropes, oh, and where all the best places were for finding tennis balls!”

Paul Osborn is a Fire Investigation Officer and Hydrocarbon Dog Handler for the London Fire Brigade. He works with Sherlock, a Cocker Spaniel.

“One animal rescue I remember very clearly was rescuing a parrot. There was a fire in a kitchen in Dartford and the family had all got out but hadn’t managed to get the parrot out. It was very smoky in the property so you couldn’t see your hand in front of your face and we were wearing breathing apparatus.

“All of a sudden, this bright blue Macaw came out of nowhere and we were able to put it in its cage and get it out of the house to return the beloved pet to its owners. I’ve also helped to rescue horses, cows stuck in ditches and cats up trees.

"If an animal needs rescuing, London Fire Brigade advise contacting the RSPCA in the first instance and if they require our assistance or specialist equipment, they will call us.”

The best thing about being a fire investigation dog handler?

Nikki tells us the best thing about being Reqs's handler.

“Reqs enthusiasm, excitement and drive to want to work in often challenging and difficult circumstances sometimes for prolonged periods of time. He’s not fazed by anything that comes his way and gets on with the job in hand.

“Every day is special working with Reqs which makes my role as a handler so rewarding. He adds so much value to the work involved in fire investigation. I’m still astounded at what he is able to locate at incidents for us making the fire investigators job much easier at deliberate fires.”

Massive thanks to @StevenageFC goalkeeper Chris Day for attending @longfield_TDC #openday today. Even bigger thanks to him for giving me a present.....a new tennis ball 🎾 😱#starstruck #newtennisball #happyboy #footballvstennisball pic.twitter.com/uEOrs3k3u4

Paul says, “I have so many proud moments with Sherlock and just seeing him do his job always fills me with pride. A few years ago, there was an arson attack on a family in south London and the police didn’t think there would be much evidence.

"We set up a 100-metre search radius around the property and just as we were at the edge of the search area, Sherlock disappeared and found a petrol can. As a result of his find, a new DNA Profile got added to the national database. It is very rewarding assisting the police and helping to secure convictions.”

Mat's best moments stem from admiration for his dog.

“As a handler, Kai’s enthusiasm never fails to amaze me, a call out at 3am following a busy shift is always met with a wagging tail, never a complaint, never a day off sick!

"The apparent ease with which he will search a tricky scene and find the tiniest traces of flammable liquid never cease to amaze me, this, every single time we work or train shows me just how valuable and vital an asset he is to us!!

“His reading of a situation amazes me too, his behaviour when visiting residential homes for the elderly, children’s wards in the local hospital, schools, SEN centres, for example, he turns from a ‘full on’ ‘mad as a box of frogs’ Mali, into a calm, tolerant, gentle friend.

“Likewise, at harrowing incidents, he can quite often be found quietly sitting alongside a firefighter or homeowner, their hand buried in the fur on the back of his neck, not necessarily the purpose of his visit, but an invaluable service nonetheless.

“All this is before we even begin to talk about the murderers, fraudsters and criminals caught, in no small part due to the evidence the dogs have identified and helped gather!

“In short, the dogs are truly amazing, and all for the promise of a tennis ball!”

“Getting his reward after working - his tennis ball. His most favourite beloved thing in the world which he gets so excited about.

Mat says, “In my opinion, the part when Kai is awake generally seems to be his favourite part, although, the amount of running and barking he does in his sleep suggests they’re pretty good too!

Sometimes, only your ‘bestie’ will do!! Kai, you can’t possibly know how much I needed that!! 🙂🙏🏻💪🏻👊🏻 pic.twitter.com/WbCs7pRXKC

“Kai loves searching, he loves working and he loves doing his job. But for me (probably rather selfishly!), his favourite times are when it’s just me and him (I hope), just being a bloke and his dog.

"Sat on top of a hill somewhere, watching the world go by, the special little moments - a look, a muzzle placed in the palm of my hand, a prized piece of tennis ball skin dropped at my feet - as long as we combine it with some ridiculous feat of doggy agility, tree climbing, boulder scrambling or some other act of lunacy that lifts the eyebrows and spirits of passers by!

“In short, Kai loves life, every single second of it!”

Jess Impiazzi is a girl on a mission. She likes to spend her time with the people she loves, doing what she loves and...

How Can I Find out What Breed My Dog Is?

This month we are looking at DNA testing, what’s involved and some of the benefits of knowing your dog’s heritage. I had never really...

I met Tony when I arrived here in Bahrain just over a year ago. Everywhere I have lived in the world I have always...