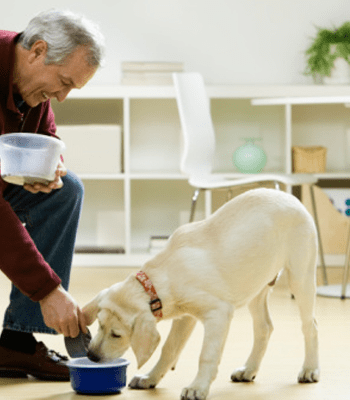 Puppies present a unique challenge. They're a lot of fun, attention grabbing and demanding. Getting the balance right between giving them time and attention without over burdening their ever evolving minds is one of the keys to success in rearing a perfect pup. Here are K9 Magazine's 10 most important puppy training tips...

10) When trying to settle a puppy into a new home, providing them
with a warm hot water bottle and placing a ticking clock in the
room where they sleep will help to replicate the body heat and
heartbeat of their litter mates and can really help them to relax
in their new environment.

9) When taking your puppy to the Vet for its first inoculations,
health checks etc, it is good practice to sit with your puppy on
your lap and not have him or her on the floor. Apart from being
able to comfort and re-assure the puppy easier in this position
you must also consider the fact that there may be a number of
sick animals in the surgery and your puppy is vulnerable if they
come into direct contact with infectious animals that may also be
in attendance at the same time as your pup. Make a very
deliberate effort to ensure your puppy’s trips to the vets are as
fun as you can make them. Don’t allow your puppy to think you are
nervous or concerned, instead make a game and even take a toy to
amuse the puppy with whilst they sit on your lap.

8) Always ensure from the earliest possible moment that your
puppy is given his or her own, private sleeping place that is not
used by anyone else in the family or another pet. Your puppy will
benefit from short periods left alone in his or her ‘den’ with
you always returning to reward the pup when he or she is relaxed
and quiet.

7) Try to make sure your puppy is entertained adequately for
short but regular intervals during the day. Long periods of being
left unstimulated may lead to destructive or disruptive behaviour
later in life. Little games playing ‘fetch’ with the pup’s
favorite toy will have the beneficial affect of stimulating the
pup, increasing his or her bond with you and allowing the pup to
expend short, sharp bursts of energy.

6) Don’t over-train your puppy. Remember, a one-year old dog is,
effectively, the same as a seven-year old person. It is a good
rule of thumb to keep reminding yourself ‘would I expect a three,
four, five or six-year old child to accomplish some of the tasks
I am asking of my pup?’ Manners, house-cleanliness and the very
basics (including socialization) are all you should really seek
to instill in your puppy until such a time, as they are mature
enough to undergo a more formal training regime. Puppies can
deceive you into thinking they are ready for training but will
ultimately ‘rebel’ against discipline as they get older. Ensuring
you have taught your puppy to respond to his or her name, what is
and is not acceptable in terms of house-manners and establishing
an uninhibited relationship with your pup is more important than
any other discipline in the early stages of any dog’s life.

5) OWWWW! Teach your puppy that biting or nipping is not a
pleasant experience for you by reacting as if in pain to their
playful nips. Rather than scold the dog, let him or her know that
nipping is not a pastime that you wish to engage in. Letting out
an over-exaggerated expression of pain will more than likely
shock the puppy into ceasing this behaviour. You will be glad you
put an end to this behaviour early on instead of confronting a
‘playful’ 2-year-old with a full set of adult teeth!

4) Decide early on what is and is not acceptable in your house.
If you don’t want your pup to use the living-room sofa as a
raised dog bed when they get older then don’t encourage him or
her to come up for fuss when they’re young just because they look
sweetly at you and are small enough to pick up.

3) Jumping up. All puppies love to jump out when greeting anyone.
Rather than reprimand the pup, simply ignore the behaviour and
wait until he or she settles down and is not jumping up before
lavishing any attention on them. Above all else, don’t encourage
the behaviour by patting or praising the dog when they are in the
‘jump-position’ or you may run in to problems as the dog gets
bigger and views jumping up as an easy way to receive attention.

2) The puppy’s name will be with them for life, make sure they
know it by associating it with all things pleasant and fun. In
the same way dog’s cotton on in a very positive way to words such
as ‘walkies’, ‘biscuits’ or ‘dinner-time’ they should be given
the same association with their own name. Too often the only time
the puppy hears his or her name is when they have done something
naughty. ‘Jasper, stop doing that!’ ‘Buster, leave that alone!’
It’s tough but try to ensure that you NEVER use the puppy’s name
in a negative scenario only positive ones. Instead of ‘Jasper,
leave that alone!’ simply, ‘Leave that alone!’ or better yet
‘No!’. And instead of ‘walkies’, biscuits or ‘dinner-time’ try
‘Jasper, biscuits!’, ‘Jasper, walkies!’, ‘Jasper, dinner-time!’
Golden rule. Your puppy should associate his or her own name with
all that is pleasant and fun and nothing that is negative. The
word ‘no’ is negative and it is enough to cover all undesirable
behaviour.

1) From the moment your puppy comes into your life teach him that
coming to you when called is nothing short of being the best
thing in the world. Puppies can’t resist humans who sit down on
the floor with legs spread apart so, while they’re easily
persuaded to come by this very simple gesture, make the most of
it by using their name, sparingly, but making a huge fuss when
puppy arrives. Try it at times when pup is pre-occupied with
something interesting and make coming back to you the most
enjoyable and rewarding experience in the world for him or her.
You will really see the benefits as the dog gets older.