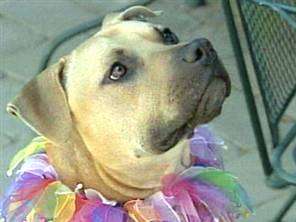 This is Leo. He used to belong to disgraced NFL footballer Michael Vick. For those who don’t know why Vick is disgraced it’s because he was found guilty of being involved in illegal dog fighting. Leo was one of his dogs, now rescued.

Leo now leads a new life. A life that many would still argue is impossible. For Leo is not only an ex fighting dog, he is also a Pit Bull Terrier type dog. In the UK, Leo would be dead.  Not helping people, not enjoying his new found life...but dead.

What he actually does is bring comfort to cancer patients undergoing chemotherapy.

Oh, and let’s think quite seriously about whether we’re happy about this fact, which I shall repeat once again: Leo would be dead if he lived in the UK. Dead, not because of his the illegal fighting his owner used him for.

Dead, not because he’d attacked anyone. No, dead just because of what he is and what he looks like. Are you happy about that?

In this article:
10 Comments