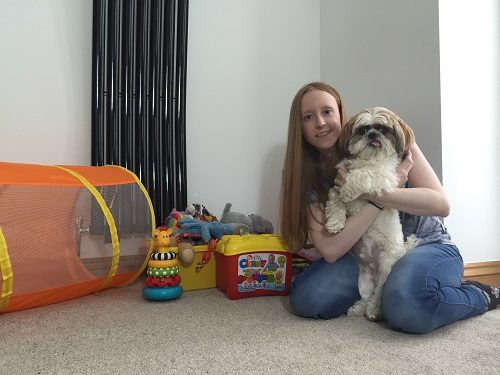 Have you ever wondered what dogs can achieve?We have dogs that can detect cancer, earthquakes, even bombs and the role they play in our lives expands at an ever growing rate. They become who we want and need them to be, whether sitting at our feet or saving a life. Sometimes the life might even be ours.

Training your dog can be an incredible way to build a bond with a new dog or strengthen one, it can be a fantastic way to stimulate senses and entertain also says Kirsty Forrester, who owns Cooper the counting Shih Tzu.

But before she helps you to teach your dog to count, here's their story.

My Shih Tzu, Cooper, and I have a wonderful bond. I’ve taught him over 60 tricks, including some advanced ones such as shape sorting and counting. His impressive tricks have earned us some press attention, where the headlines have called him “Einstein” and said that he’s, “cleverer than a toddler.” One journalist even joked that Cooper was, “smarter than his mother-in-law”! The headlines are fun to read, but I doubt that Cooper is exceptionally smart. We do, however, have an exceptional bond.

Before Cooper: My Dog Phobia

My relationship with Cooper seems unbelievable when I think about how I used to feel about dogs. I don’t know what caused it, but for years I had a terrible dog phobia. My mum recalls a moment when I ran into the road to avoid walking past a dog on the pavement! Apparently, being hit by a car seemed like less of a risk to me than walking too close to a dog.

When I was 15, I met the first dog that didn’t scare me. He was an American Cocker Spaniel called Noogie, and as I lay stroking him, I was overcome by a warm, peaceful feeling. As if a switch had been flicked inside my brain, my phobia of dogs was gone. Not only that... I wanted a dog!

Less than a year later, in 2003, my family got our first dog: a 12-week-old black and white American Cocker Spaniel puppy. I named him Harry. He was hyper and nothing like Noogie, but that didn’t matter. I went to dog training classes with him when he was a puppy, but my parents did most of the training. Five years after Harry, we got a white Maltese Poodle puppy called Alfie. I was less involved in Alfie’s training, but I reinforced it at home.

Getting My Own Dog

When it was time for me to move out of my parents’ house, I wanted to get a dog of my own. I was 25, but I suffered from depression and social anxiety. I worried that I wouldn’t be able to cope with living by myself, so I hoped to find a dog that could soothe me. I wanted a small, fluffy lap dog that would be calm, not too yappy, and wouldn’t need much exercise. Intelligence and trainability were not on my list because I wasn’t planning on teaching my dog many commands beyond the basics. I researched dog breeds for months and eventually decided on the Shih Tzu.

In July 2013, my mum, dad and I visited a litter of Shih Tzu puppies that I had seen advertised online in Blackpool, 20 minutes away from my home in Lytham St. Annes. All of the puppies were running around and tugging on our shoelaces, apart from one that kept crawling back into bed. When I picked that puppy up, he fell asleep in my arms. I knew instantly that he was the one for me. I called him “Cooper.”

He was too young to leave his mummy, so I wasn’t able to bring him home with me for another week. On the ride home from meeting him, I became overcome with emotion and cried. I felt overjoyed to have found what I knew was the perfect dog for me, but I knew that this week of waiting would be the longest week of my life!

The experience of bringing Cooper home wasn’t quite like I had imagined it would be. I thought I would instantly bond with him, but I kept holding back from showing him affection. My mum had to encourage me to hold him and stroke him. I think I was afraid I would accidentally hurt him!

Cooper was much more playful and energetic than he was when I met him at the breeder’s house. The hardest part of the day was bedtime. I could not get him to sleep on the floor. After a few sleepless nights, I relented and let him sleep in my bed, covering the sheets with towels and puppy pads just in case (he never used them). Since then he has slept in bed with me every night, normally right next to me with his head on the pillow.

After Cooper had been home for a few days, I started using positive reinforcement to train him. He naturally sat down often so I thought “sit” would be an easy first command to teach him. I used small pieces of grilled chicken as a reward, and within about ten minutes he was sitting down as soon as I asked.

I then moved on to the other common commands: down, leave it, and shake hands. I was shocked when he learned how to shake hands after three repetitions, and how to leave it (leave food on the floor without eating it) within ten minutes. Each time he learned something new, our bond seemed to grow stronger.

First Signs of Something Special

In October 2013, when he was three months old, Cooper went to his first puppy training class. The trainers, Hannah and Becky, soon realised that Cooper was ahead of the rest of the class, and by the second week he was being given extra homework. On the third week, the class was asked to teach our dogs a trick. I had noticed that Cooper’s tongue sometimes poked out, and I wanted to teach him to stick his tongue out on command. I wasn’t sure if he would be able to do it so I also taught him a backup trick: crawl.

I didn’t need that backup trick. With the help of a clicker, Cooper successfully learned to stick his tongue out on command. When it was time for him to perform in front of the class, he performed the trick flawlessly. The other dog owners were amazed, and the trainers said they had never seen such a young dog do that kind of trick. On the last day of puppy class, he received a present for being the “star pupil.”

Apart from Cooper’s level of training, the only difference I ever saw between myself and the other puppy owners was my tone of voice. I spoke as if I was asking Cooper to do things instead of commanding him. I still prefer to use a questioning tone because that’s what works best for Cooper.

Hannah and Becky always encouraged us to challenge our dogs, so when Cooper’s dog puzzles became too easy, I started buying him toddler toys: a basketball hoop, a ring stacker, and a shape sorter. As he mastered each toy, I began to wonder what else he was capable of. I had already read several dog trick books, but I wanted to test his limits in new ways. In a study I read, a dog learned to communicate by pressing symbols that played an audio clip. This gave me the idea to purchase some recordable sound buttons for Cooper.

As with all of his advanced tricks, I don’t give him cues. I also rearrange the positions of the buttons and kibble. I don’t think he understands the concepts of counting or shapes, but he really is doing these tricks by himself.

When people ask me how I was able to teach him these things, I say it’s because I’m very patient and he has a long attention span. That’s true, but I’ve enhanced these traits through our training and by not limiting him to the most common dog tricks. By teaching Cooper unusual tricks, he gets the opportunity to show me what he can do. Each new trick I teach him gives him a sense of accomplishment, enhances his ability to learn more tricks, and strengthens the bond between us.

Throughout a typical day, I try to stay in tune with Cooper’s wants and needs. There are moments when he will do something like glance up at a shelf, and I’ll look over to see a forgotten piece of kibble. Sometimes he will cry at his toy box when he can’t reach what he wants, and I can instantly tell which toy he’s after.

My family has noticed that when we’re performing tricks, Cooper always seems to be waiting for the next instruction. When I’m training him, he seems to understand what I want him to do. I try my hardest to understand him, and in return, he tries to understand me. We show each other an immense amount of love, patience, and respect. I don’t always feel like Cooper’s owner or trainer... sometimes I feel more like his equal or his servant!

Is Cooper a doggy genius? I don’t think so. I like to think he’s an example of what dogs can do when they’re given the types of attention and training that suit them the best, along with opportunities to shine. Genius or not, I couldn’t be prouder.

Has Kirsty and Cooper's story inspired you to teach your dog to count? Read their easy to follow guide here

Puppies bring joy. Worrying about which food is best for puppy when they land in your home can be stressful. Never fear. Our puppy...

Ali Bastian, Molly and Mable Discover How Pet Friendly West Sussex Can Be

TV actress and dog lover, Ali Bastian has joined the K9 Magazine pack as our new pet friendly travel reporter. Alongside her two sidekicks, Molly and...

Celebrity photographer Raquel Rischard made the move from starring in front of the camera to fulfil her true passion behind the lens. She now...

A Dog’s Life in Bangladesh