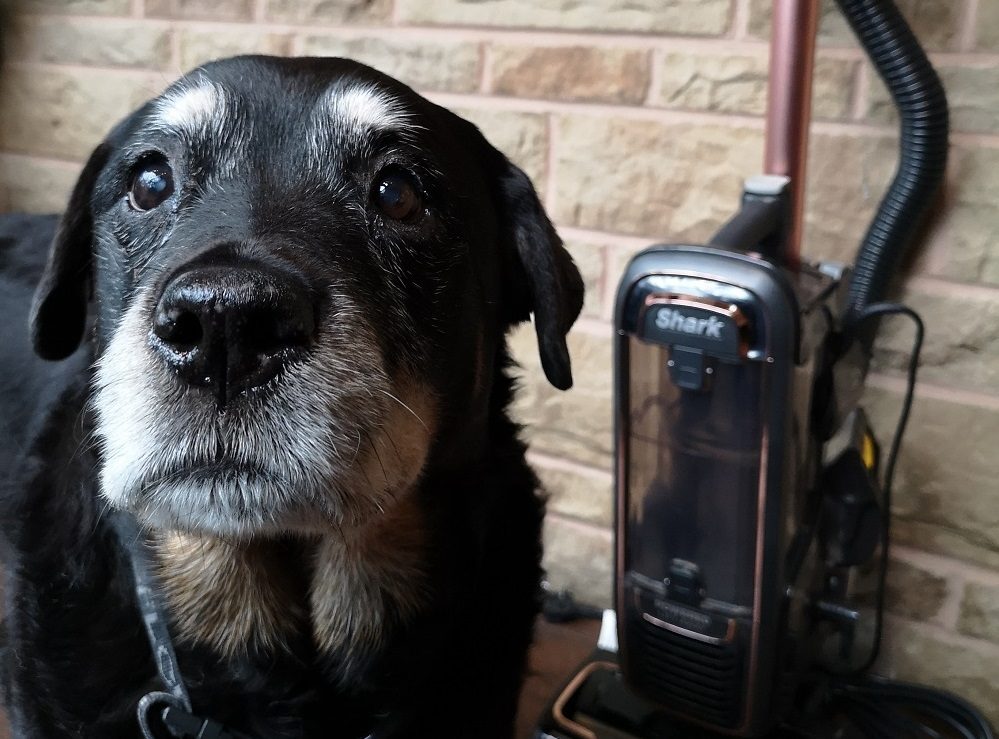 Over the years I have become somewhat of a vacuum connoisseur, forced mainly into this by my cat, dogs and cream carpets.

In recent years the rise of the cordless vacuum has dominated my vacuum cleaner reviews, but Shark recently contacted K9 Magazine inviting us to review their new Shark Anti Hair Wrap Vacuum Cleaner, citing the anti-hair wrap brush as something that might appeal to dog owners.

Admittedly, my hairs are longer than my dogs so it's usually mine wrapped around the brush head more than theirs, but the task of cleaning the brush head is a bit of a pain after spending 40+ minutes on a whole house blitz so I thought it'd be worth a try, and the subtle rose pink of the Shark vacuum caught my eye too. It's quite different compared to the bright yellow and green shades usually favoured by popular vacuum cleaner brands.

A few days later the Shark Anti Hair Wrap Upright Vacuum Cleaner XL with Powered Lift-Away and TruePet (RRP £399.99, at the time of writing available on a price match offer for £268.00) arrived in our offices.

Before we get on with the review, let's break the name down and what it all means because it's a bit of a mouthful. In a competitive marketplace, I suppose it's worth adding it all into the product name so you know what you're getting, but unless you know what each part means, it's a bit hard to decipher if it's all relevant to you.

This is what I worked out:

Anti Hair Wrap - this means the brush head has anti-hair wrap technology, so at the end of a vacuuming session, you shouldn't need to remove hairs wrapped around the brush head.

Powered Lift-Away - this means you can convert it into a portable/handheld cleaner.

TruePet - I think this refers to two things - the pet tool that comes with the vacuum, so you can attach and clean sofas and stairs, it's supposed to pick up pet hairs better, and the LED headlights which Shark says "illuminate hidden dust and pet hair pile-ups under furniture".

XL - the vacuum comes in various sizes, the XL is designed for vacuuming large homes, so it has a bigger capacity for dust/hairs and debris.

So, now that's all cleared up, let's get on with its performance and how good it is at doing all of those things.

With minimal fuss it was put together ready to use, there are instructions to check you've got each part in the right place but it's pretty intuitive.

Here are all the things you need to see to use it properly (to save you hunting around to find them).

I did end up using the instructions to work out the parameters for what constituted a thick or low pile carpet/rug just to avoid any unnecessary problems, but the difference is as you'd expect - one's the setting for thicker carper, one's for a low pile carpet.

I love the colour, the more subtle pink from the rose gold and dark grey/black (it looks navy in these photos though, doesn't it?) is a nice combination.

And you can see from the size, it's fair to say it lives up to its XL tag. It is a big vacuum cleaner but the tank that holds the debris swept up from vacuuming is a bit of an optical illusion. I'll explain why later.

Multiple accessories come with it, including an upholstery tool, a 2 in 1 duster crevice tool and a 'Pet Power' brush which also has the anti-hair wrap technology.

Firstly, would I recommend? Perhaps. It does the job the lengthy name implies it will.

It's a good vacuum cleaner, it handled the dirt and pet hairs in my home well and I think if the objective was to make a vacuum that won't wrap hair around the brush head, that can be switched into a portable vacuum and that can handle cleaning a large home, it does the job fine.

It cleaned my rugs far better than any other vacuum. Usually, I can still see bits and bobs stuck in the fibres even after shaking and then vacuuming but the Shark handled the rugs like a pro getting everything on the surface and deep down.

And the LED lights that highlight dust and debris stuck under radiators or attaching themselves to the corners of rooms are good. I'd say the brush head seems bigger than the Shark DuoClean I've previously reviewed, which slotted under my radiators much easier though.

I mentioned above that it's a bit of an optical illusion with the XL vacuum cleaner and here's why.

While it certainly has a bigger capacity than most (it takes about double the amount my Gtech does so I can do twice as much without having to stop and empty), only about half of the tank holds the debris.

So when you first look at it from the front and think 'wow, I've got all that space?' you don't, you have about half so even though I discovered I had about double what I was used to - because I expected for its size I'd have more, I was disappointed and couldn't shake that feeling. Having more space than usual is a good thing though so I mention it to help others avoid the same feeling.

It's also pretty heavy compared to all other vacuums I've reviewed in recent years, both corded and cordless, and that's a bit of a drawback. I know, for example, my mother in law wouldn't use it because of the weight. It doesn't bother me specifically, but it's worth noting.

If you're used to a cordless cleaner, it'll take you some time to get used to cleaning with the restrictions of a cord again, which is just a matter of fact, not a specific reflection on this cleaner.

The cord on this one's a pretty good size (8 metres), even so, it's perhaps just a smidgen too short for what people might consider necessary for a large home.

For example, it handles my upstairs pretty well but downstairs where it's pretty much all open plan, I can't quite reach the furthest away points at either end when plugged into the middle of the room/s.

Overall I'd say at its retail price of nearly £400, it's a lot of money. However, when it's reduced and price matched against other retailers for £270 or thereabouts, it's definitely worth investigating and very competitive for the quality of cleaner.

I still reach for it because the fact I know I won't have to untangle hairs at the end of a mammoth vacuum session picking up the muddy footprints of two adults, three dogs and a cat, is something that makes me choose it above others. That tells me quite a lot. Everything above is stuff to note, but it doesn't stop me wanting to use it.

Tangles hairs around vacuum brush heads is a problem that had been getting on my nerves in recent months before we received the invite to review the Shark vacuum so it's something that I wanted to find a solution to and this vacuum does give me the answer to the problem.

Many thanks to Shark for sending their newest vacuum cleaner for us to review. Read more reviews on their website here.

3.6
In this article:Issue 130, Vacuum Cleaners For Dog Owners

We love a bit of pet tech. It's a huge market, growing every year. Smart feeders for dogs, along with dog activity monitors are...

In This Issue... Talking Point: The Heartbreaking Reality of the Puppy Farming Industry in Wales Real Life: 12 Photos of Dogs Before & After...

Beverley Knight: ‘My Dog Has Taught Me Real Unconditional Love and It’s a Beautiful Thing’

Queen of British Soul Beverley Knight has been at the top of her game making hit records for the last two decades. Next month...