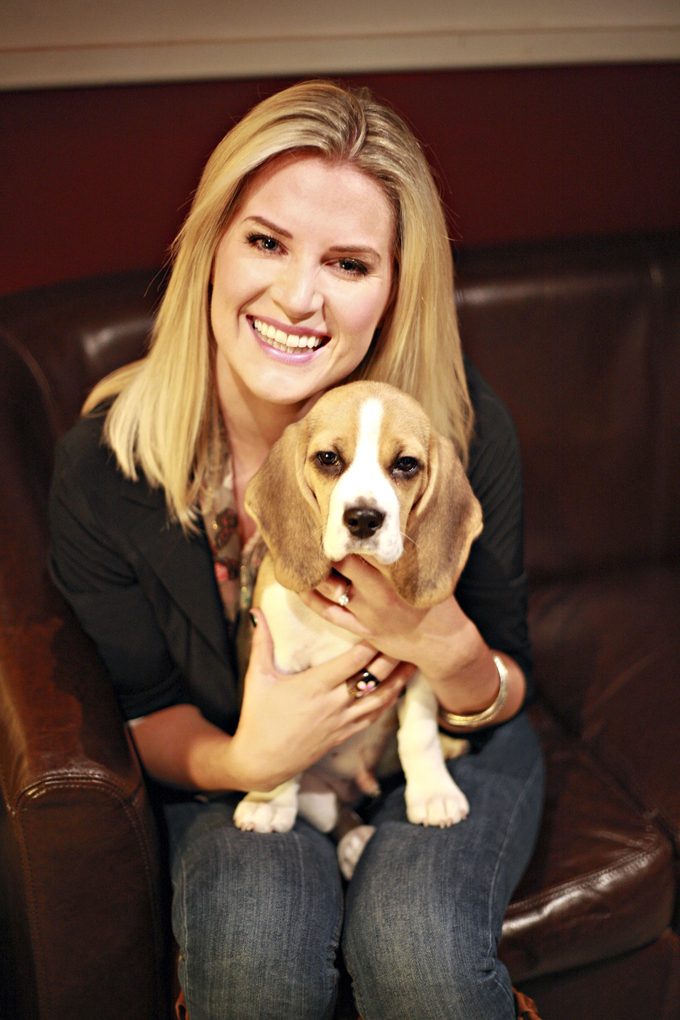 Sarah Jayne Dunn is best known for her long running character, Mandy Richardson in Channel 4's soap, Hollyoaks. But taking regular breaks from her soap character has given her the chance to play various characters on stage in well established plays such as 'The Vagina Monologues' and 'When Harry Met Sally' aswell as films such as Hollywood blockbuster, The Dark Knight.

She will be back on screen shortly playing a character in the much anticipated film 'Death'. K9 Magazine caught up with Sarah to find all about her love of dogs, what's next and the new love of her life - a Beagle called Wilson.

Tell us about your dog, Wilson - we'd like to know everything about him!

Wilson is an 11 week old Beagle, so still very much a baby. He's been with us around 3 weeks now and gets his final injection in the next few days so we're really excited to be able to start taking him out after that. He's such a funny boy, he's a real character.

Before we got him we really researched the breed. I've always had Shih Tzus, but my fiance, Darren, wanted a dog bigger than a Shih Tzu so we looked at the different breeds we thought we could own, Springer Spaniels, King Charles Spaniels and we have friends with a Beagle, so we started looking into the breed and found they were good with kids, good with dogs and short haired. So I spoke with the Beagle Association to get some advice on finding breeders and she put us in touch with Eardley Hall Farm in Staffordshire.

We were going on holiday so we knew we couldn't do much more before we were back and we were told they'd just had two litters of puppies with puppies in each litter. We'd decided we wanted a boy and there were three boys.

We were encouraged to visit every week to see the puppies as they grew and developed and we got a lot of great advice from the breeders. They've been brilliant and it was great to see both of Wilson's parents to get a feel for how big he might grow.

Deep down we knew we wanted Wilson, but the breeders who show aswell were deciding between two of the boys and we waited for their decision before and I think it was fate that Wilson came home with us.

Well we've owned Shih Tzus, we have a picture of me as a little baby around 1 year old with Westley. My mum's such a softie, we got Westley because someone came to our door and said they'd found him and didn't know what to do, so my mum said 'we'll take him'. Then we had Barney, another Shih Tzu and a Yorkshire Terrier at the same time, and then Leo.

I got Leo when I'd moved out of home but went home a lot, but with working so much and living in an apartment, he split his time between living with my parents and me because my apartment wasn't so pet friendly.

He got attached to my parents and when he came to live with me, he came for a week and my parents really missed him. They suggested maybe sharing but I didn't think that was fair on him to go between both homes and so he lives with my parents.

I really missed having a dog around and we knew now was a good time to bring a dog into our home. Darren works 9-5 most of the week, I've got a bit of a gap now having just finished Hollyoaks and so I'm around more and can be here while Wilson settles in properly.

We make sure we leave him for an hour here and there so he gets used to the fact we go out sometimes but I'm loving every moment.

You've been lucky enough to have played a few different characters in your career, everyone will of course know you as Mandy Hutchinson in Hollyoaks, to appearing in films such as A Dark Knight, to performing in theatres. What have you got coming up?

Well I've left Hollyoaks now and have a film coming out at the end of this year called Death which was really fun to do. I've also just been in The Real Hustle, so that was something different and I really enjoyed that.

I really enjoy going back to Hollyoaks and spending time there, I think this was my third six month contract that's just finished. The set is just down the road from me, it's a lovely team and the cast are great.

It's also close to home so I can spend time at home when I'm there and have almost normal working hours, but I also really like the fact I can take a bit of time out and do something entirely different.

Who inspired you to follow a career in acting?

Well when I started at Hollyoaks I was just 14 years old, so I was so young to be honest I didn't know what I wanted as a career. I liked modelling aswell and it was my agent at the time who got me an audition and it went from there. From that point on my contract just kept getting renewed and after 10 years, I decided to go out into the world. [premiumcontent] And finally, this is always a tough question and often requires a fair degree of thinking time but….If Wilson had the ability to speak and answer one question and one question only, what would you ask them and what do you think that they would say?

He seems made up, but it would be nice to have some reassurance.

Notforpusssys.com – for the fabulous luxury chocolate sofa bed and selection of goodies

The Company of Animals – for their amazing Pet Head shampoos, conditioners and sprays range – plus their amazing interactive Nina Ottosson TreatMaze game

And last but not least, the very pet friendly pub, the Horse & Jockey in Chorlton, Manchester and Sharah Smith Photography