Apartheid is going to the dogs, so says Ricardo Cerd, owner of Lulu, the 'genetically recessive' Norwich Terrier.

As enthusiasts and lovers of those wonderful four-legged creatures of the canine persuasion prepareded to gather at Crufts 2005 in Birmingham, the dog world’s most prestigious annual event, an insidious little drama unfolded behind the scenes.

Little did I know when I became the owner of a particularly beautiful dark grizzle-coloured Norwich terrier, who goes by the name of “Lulu” (the unwilling star) and boasts 27 champions in a five generation pedigree, that we would be the unsuspecting players in a soap opera whose plot would revolve around the murky world of canine apartheid, intrigue and politics.

Having recently learned that Norwich terriers had been placed on the UK endangered breed list - they have very small litters and there are too few of them - I allowed myself be persuaded to attend Discover Dogs Day at Crufts, with Lulu, not to show her, but to man the Norwich terrier stand to promote the breed. 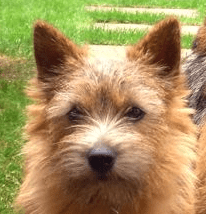 I was pleased to sacrifice a day of my time, and subsequently received an e-mail from the President of the Norwich Terrier Club (a vet), saying “she would be grateful if I could come to Crufts on Thursday 10th March (Terrier day) as the owners wanted to show their dogs and not sit in the booth.”

However, along with this friendly invitation came an ambiguous warning: “but as she (Lulu) is a brindle colour, you will have to tell people that it is not a recognised colour for showing - just an occasional "recessive" gene, which pops up every now and then, but you know, the most important thing is to have happy outgoing dogs for people to meet, and for the owners to chat about the breed and say how wonderful they are!”

Initially, I paid little attention to the warning and replied saying I would be pleased to be at Crufts on the agreed day. However, I pointed out that the official name of the colour she had referred to as “brindle” was “grizzle”, and although it did not occur very often, it was not just the result of a “recessive” gene, but a Kennel Club recognised colour and breed standard.

Repeated references to it can be found in the definitive book on Norwich terriers by Marjorie Bunting entitled “The Norwich Terrier”. As a result, there are no regulatory impediments to showing a Norwich of this colour.

Several weeks later, I received an unexpected phone call from the President, who indicated that “certain Norwich breeders” were concerned about Lulu attending at Discover Dogs Day. I was told that I was welcome at Crufts, but Lulu was not, because of her colour! Gob-smacked, I said: “how could I be at the show without my dog who could unfortunately not resign her breed?”, but I did resign my membership in the Norwich Terrier Club, with immediate effect.

The President with a show of charity to assuage my anger, offered to reimburse any expenses I had already incurred, which of course Lulu and I firmly declined.

Sickened by what I had just heard, I could not believe Lulu had been subject to such blatant and groundless discrimination by the senior-most representative of a club supposedly dedicated to promoting the breed.

How could the welfare of Norwich terriers be fostered by blackballing (no pun intended) Lulu, to cater for the agenda of a few unnamed breeders? Were Crufts and the Kennel Club aware of the discrimination? Had the Norwich Terrier Club sanctioned the President’s offer to reimburse my expenses?

Needless to say, Lulu, my sons and I did not grace Crufts with our presence this year, as our hair would not have stood the necessary tinting to pass the hidden agenda! Perhaps, the unnamed breeders are throwbacks; unfortunately, I do not know their pedigrees. Anyhow, thank God “man’s best friends” are not involved (unless it’s Disney) in such human machinations, certainly not of the prejudicial kind.

Lulu’s beauty, character and striking colour (grizzle) speak for themselves. They always elicit compliments and adulation in Kensington and Hyde Park, both from strangers and dog enthusiasts of all colours (including Norwich owners), who stop to admire her. This praise is fully underlined by an international fashion photographer enquiring whether he might ‘hire’ her for a photo shoot! As my sons put it so aptly, little Lulu is a star! And such stars have the wet nosed dignity to remain above the fray, away from the venal behaviour of a few.