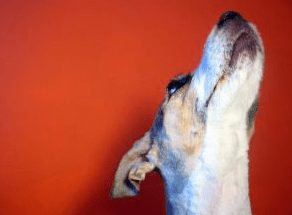 The dog is an animal from the order 'Carnivora'. In other words a meat eater. We humans are omnivorous, in other words we'll eat just about anything that's put in front of us. Dogs eat meat, we eat all foods. But have you ever noticed that many dogs pay no heed to their scientific description as Carnivores?

In fact, there are a good many dogs who couldn't give two hoots as to whether it's flesh, fruit, fish or Fray Bentos pies that they are throwing down their necks.

So it could be argued that a dog is better described as omnivorous as we are, certainly not a true carnivore in the same sense as it’s feline counterpart.

We know that dogs can survive on a vegetarian diet, there are even tales of runaway domestic dogs surviving on a diet of fallen apples and other fruits for weeks on end.

They'll scoff just about anything, they can survive so why dog pet food companies insist that they need to spend millions and millions of pounds investigating the science behind a finely balanced doggy dinner?

Dry, or complete dog food as it is better known, has been around for a lot longer than most people realise. It is only in the last 10 to 15 years that the market for anything other wet (tinned meat) dog food has been a regular on the British pet owner's weekly or monthly shopping list.

Think back 10 years if you will, remember the TV ads of the era? How many commercials were show promoting the latest life stage products, premium quality formula's, science diets and the so on? Remember mixer? Do you see many ads for mixer now?

It’s a reflection of the advances made within the pet food sector that all in one, complete pet food is gradually replacing the traditional ‘meat and mixer’ dogs dinner.

The sales figures bear testament to the decline of pet food mixer. In 1991 British pet owners spent ?71m on mixer however in 2000 the mixer market was valued at just ?46m. In stark contrast, the dry / complete dog food market has enjoyed a meteoric rise in popularity being valued at more than ?270m in 2000 compared to ?51m in 1987.*

The pet food industry in the United Kingdom was born at the hands of a lighting conductor salesman from Cincinnati, Ohio. It is reported that a ship docked in England just before the turn of the 20th Century and a passenger by the name of Mr. James Spratt had his attention caught by the sight of dogs scavenging for discarded ships' biscuits on the quayside. In this moment Mr. Spratt had his eyes opened to the opportunity of producing some form of specially prepared pet food.

Spratt embarked on a new career and within 50 years, millions of British and European pet owners were feeding their animals on a prepared diet, developed specifically for pets. In 1957 the first ever 'dry' or extruded pet food was developed in America and in the year 2000, the market value for pet in North America was $11.6bn, seeing a major increase in demand for ‘higher quality’ or premium rated products.

Pet food is in a unique position as a consumer commodity for it is not the purchaser who is the ultimate consumer. Bearing in mind that the vast majority of pet food consumers are, how shall we say, 'fairly easy to please', it is unsurprising that most owners discover a food that their pet likes and sticks to it.

After all, why change when the tail wags so hard and the drool and subsequent mouth wiping on the carpet pays testament to a very satisfied customer?

People are becoming far more aware of the benefits of eating a balanced, healthy diet. Us humans are well catered for, science has shown us the way and we understand the responsibilities on us to eat well, exercise regularly and keep a close eye on the calories.

Dogs on the other hand are not so fortunate as they, quite simply, have to eat what we decide to give them. You are what you eat, as the saying rightly informs us and this is just as true for dogs as it is for ourselves.

As we removed them from the wild we do have an ultimate responsibility to ensure our dogs eat a balanced, nutrtional diet and lead as healthy a lifestyle as we are able to provide. On the whole, do pet owners do this at present? Honestly?

The fact that a reported 50% of British pets are overweight or clinically obese would indicate not. Far from the problem of underfeeding and malnourishment, British pets are faced with the serious danger of obesity, heart disease and various other associated problems.

Just as it is with children, our dogs are getting fatter and maybe it's time to look at the genuine advances being made in the pet food industry.

Millions upon millions of pounds are pumped into the research of pet nutrition by food manufacturers every year. The quest to develop the most effective pet food products to cater specifically for particular breeds, life stages, states of health etc is seemingly un-ending. And guess what? It's not cheap either.

The pet food manufacturing industry is more competitive today than it has ever been, so-called premium quality diets are heavily promoted in the media, the drive for new customers from competing manufacturers is intense, marketing of the products is big business and you will often discover that premium quality brands are stored in the most dazzling, eye catching packaging in the pet store. Guess what? This is not cheap either.

One company who was particularly keen to advocate a change in pet feeding habits was Hills Pet Nutrition. The Science Diet was and still is often found in veterinary surgeries around the UK, although it now competes for shelf space with the brands of pet industry giants such as Pedigree and Iams.

It must be said, the concept of paying more than ?30 for a bag of pet food (and a small one at that) then having to carefully measure out a small cup of dried pellets does not appeal to all owners. Many owners feel they are in some way not giving their dog a ‘proper’ meal unless the bowl is piled high with juicy, meaty chunks and mixer for added crunch. Remember those ads again? They made tinned dog meat look good enough for us all to eat never mind the dog!

Another problem with the concept of this type of food is cost. ?30 for a bag of food! Unheard of. But take a second to read the label. Really read the label and do the calculations. You will, more often than not, discover that the cost of feeding a so-called ‘premium’ product actually works out at a very similar daily rate to feeding a can of meat and mixer.

Not only does it cost the same, it does have the extra benefits of being easy to manage, free of odour and backed by those millions of pounds worth of scientific research.

A company who’s name is etched in the history of premium quality brands is the Procter & Gamble owned Iams Company, makers of the Eukanuba and Iams brands of dog food as well as a veterinary exclusive range of diets specifically designed to help manage disease.

Iams have been at the forefront of producing specially prepared meat based, life stage, and premium rated food since 1946.

The bright packaging and familiar logo are synonymous with the premium quality pet food market and can now been found in many pet shops and veterinary surgeries. The Iams brand is now available in major supermarkets, yet another sign of how premium products are becoming more mainstream.

Given what we now know about diet, life stage nutritional requirements and the need to keep our pets weight at the optimum level premium quality products should not be dismissed as expensive, glossy packaged luxury items.

The fact remains, these products are not as expensive as you may think, yes they do cost a lot to make and they are not all suitable to all dogs. Reading food product labels has become second nature to many people as they become more aware of the health issues associated with food. As your dog is only in a position to eat the food that is put in front of him, it would be wise to ensure his meals are as suitable as your own.

In this article:
5 Comments