You really couldn't make it up... a Welsh police force is training its dogs to headbutt criminals rather than bite them, because politically correct - 'PC' - bosses are afraid that allowing the dogs to bite criminals will infringe their human rights!

The policy, devised by North Wales Police, comes as a result of increased compensation claims from members of the public who have been bitten by police dogs, writes Nick Mays. 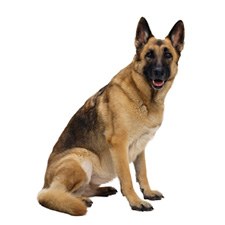 Officers say the toothless tactic provides a safer way to tackle uncooperative offenders, and dog squads may soon adopt it across the country. But critics say it is another example of political correctness gone mad - putting the rights and safety of criminals before cutting crime and protecting the public.

Rather than biting suspects, the dogs have instead been trained to disable their targets by leaping at them and delivering a flying 'head-butt'.

The scheme, pioneered by North Wales police was headed by controversial chief Richard Brunstrom, using the Belgian Shepherd Malinois, which are fast becoming the police dogs of choice in the UK, as they are smaller, more agile and stronger than the traditional German Shepherd.

Under the scheme, the dogs would be muzzled to prevent them from biting. To protect the animals, a metal rod across the front of the muzzle helps absorb the impact of the strike.

'Instead of biting, the dog is muzzled and launches itself like a missile at the midriff of the target,' said Deputy Chief Constable of North Wales, Clive Wolfendale.

'It is one of the additional options open to us to muzzle our dogs and get them to use a head butt,' added Sgt Ian Massie. 'We believe it is a safer option for an offender to be head-butted.'

The scheme was launched after the Association of Chief Police Officers published a paper for dog handlers on human rights. In it, police dog handlers in a position where they are considering setting their dog after a suspect should ask are told to ask themselves: ‘Are there human rights issues involved in what I am about to do?’

But retired dog handler John Barrett, who served for 18 years with the Metropolitan Police, is critical of the new tactic and said: 'This sounds like political correctness. It is very strange - I think the public would laugh at you with a muzzled dog, and it could be counterproductive if people think the dog has to be muzzled because it is dangerous.'

The move comes after a surge in compensation claims from bite victims - including officers. One of the UK's biggest police forces, Greater Manchester paid out £59,000 in compensation in five years.
But alleged wrongdoers are warned - the dogs have a powerful butt, especially after a long run-up.

The force's Dog Section Manager Sergeant Gareth Crow, who pioneered the technique, says the flying Malinois head-charge is the equivalent of a baton blow if the dog has a full run-up. Apparently, the technique has been deemed so successful that muzzled dogs are also being used for crowd control at football games. Sgt Crowe said: "People may think a muzzled dog can't do anything but they are caught out by the power and speed of the tactic.

'For me, it is a high-level use of force to physically bite a person. We've now got a continuum of force that gives us another tactical option to deploy the dog.

'The 'conflict management model' of policing says that any force must be reasonable under the circumstances. It is clearly to gain control, prevent injury to the officer or others, and prevent damage to property.'

Sgt Crow did not say, however, how the dogs would manage to headbutt a suspect in the stomach when they were running away from them and would thus have their backs to the dogs. A headbutt into the suspects’ lumbar region would surely cause greater injury and lead to further compensation claims.

North Wales Police Chief Constable Richard Brunstrom earlier this year faced criticism from within his own ranks for plans to award his officers points for making arrests or handing out fines. Under the scheme, they could receive twice as many for seizing an abandoned car as for making an arrest.

Mr Brunstrom, the Government's adviser on road safety and speed cameras, has earned himself the nickname the 'Mad Mullah of the Traffic Taliban'.

In 2003, he called for the number of cameras to be trebled and the following year admitted getting officers to 'hide behind road signs and walls' with handheld devices.

His force has also been criticised for its appalling burglary clear up rate and for launching costly inquiries into alleged anti-Welsh comments by Tony Blair and Anne Robinson.