My older dog, Mia has had a tough couple of years. Regular readers will have seen me speak of this before, but over the last two years she's had three operations as a result of cancer and lost her best friend, Chloe.

After Chloe passed and before we knew she had cancer, we thought her general sadness was due to the loss we all felt. Only after we made commitments to bring two new dogs into the home did we realise what else was wrong and so mid-way through her battle, two new dogs arrived. 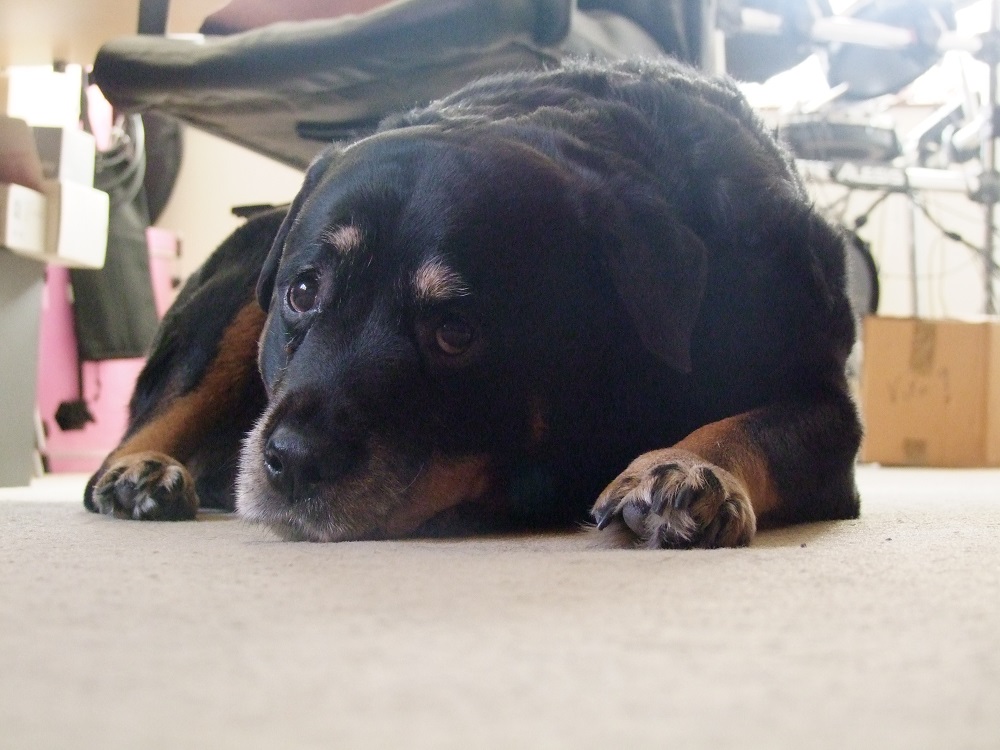 Christopher, a puppy who she took under her wing and Danny, a little older, who arrived with us after being found as a stray with his background unknown, but at times his eyes revealed he was carrying memories of a life you wouldn't wish on any dog.

And so two years on, Mia's now thoroughly embracing her role as matriarch but for a time the stress on her body from illness and operations took its toll and we saw her personality change. The dog we'd known who'd chase after a tennis ball or football from one end of the park to the other had gone and she started taking a backseat opting for the 'easy win' tennis ball. 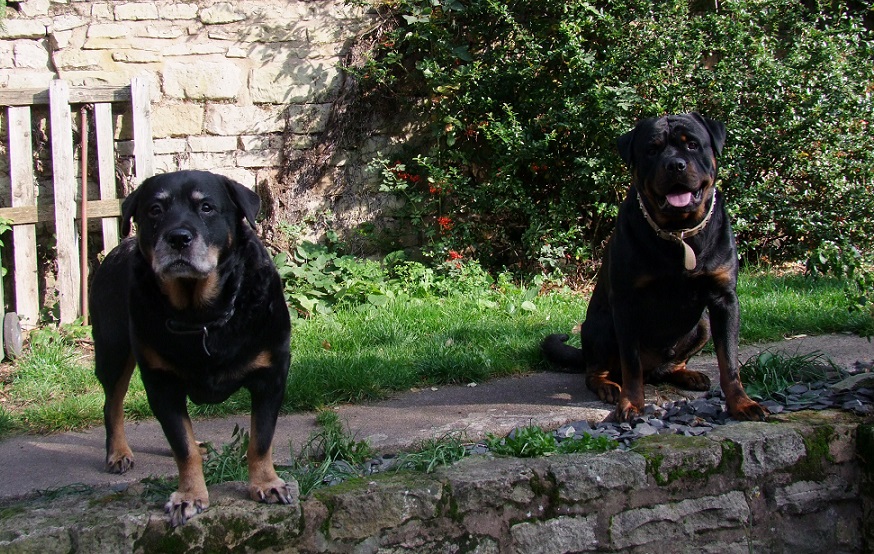 Now approaching her 11th birthday in January, her age is starting to show in her mobility. As a Rottweiler, perhaps we have been lucky not to see too much evidence of this until recently or perhaps it's been mixed in with her recovery, but over the last 6 months there has been a noticeable change.

Not at whether she does as you ask, she regularly does as she pleases answering you calling her name with an expression which says 'what?' but the speed at which she does anything has changed, and it's tough to see. 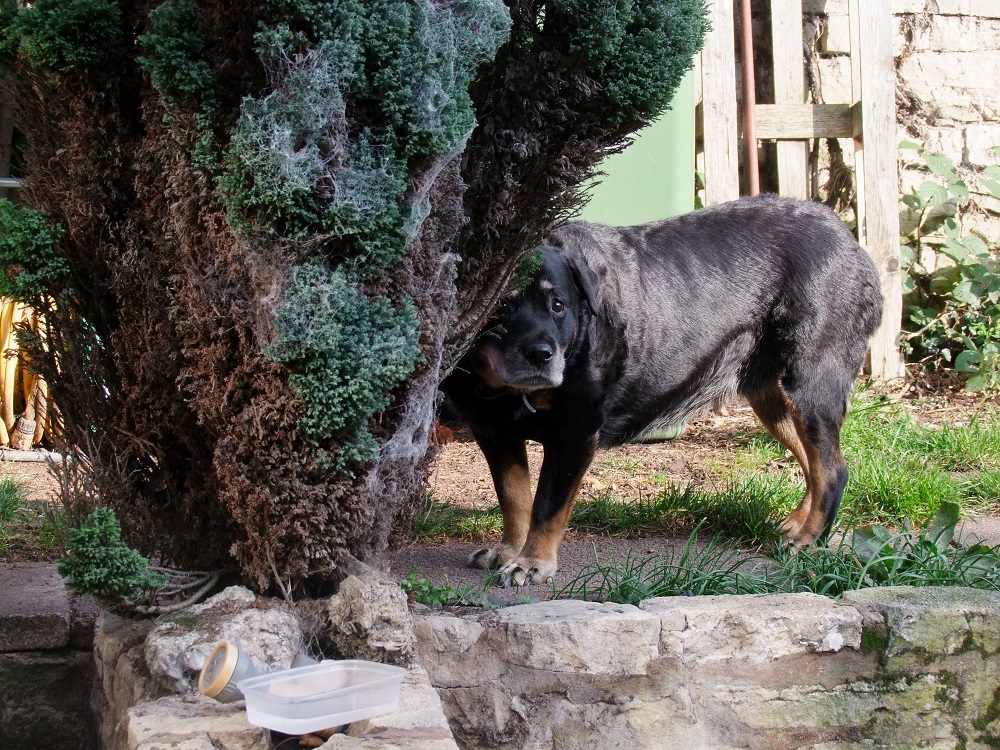 You get over one battle, grateful to still have this enormous personality wrapped in a bundle of stubbornness in your life only to then start noticing her age, while trying not to think that she's older by some years than the average age of her breed.

Chloe and her dad, Jackson always had successes with magnetic therapy collars, and so this was a route we knew we'd choose for Mia, but we also bolstered this with green lipped mussel capsules or other supplements. One without the other never worked.

In recent months, though, we noticed the muscle in her back legs was disappearing, they weren't what they once were and she was still struggling when getting up. As a dog who spends a lot of her day and night sleeping upside down, it was noticeable every time she rolled over and attempted to get up, so when we were given the chance to review Pettura Healthy Joints liquid supplement (RRP £24.99) we jumped at the chance to try and find something which could improve her situation and replace the capsules.

When our package of Pettura arrived, it included Mia's Healthy Joints supplement, a Calming supplement for Danny and a bonus Oral Health supplement, which helps to control tartar and bad breath. 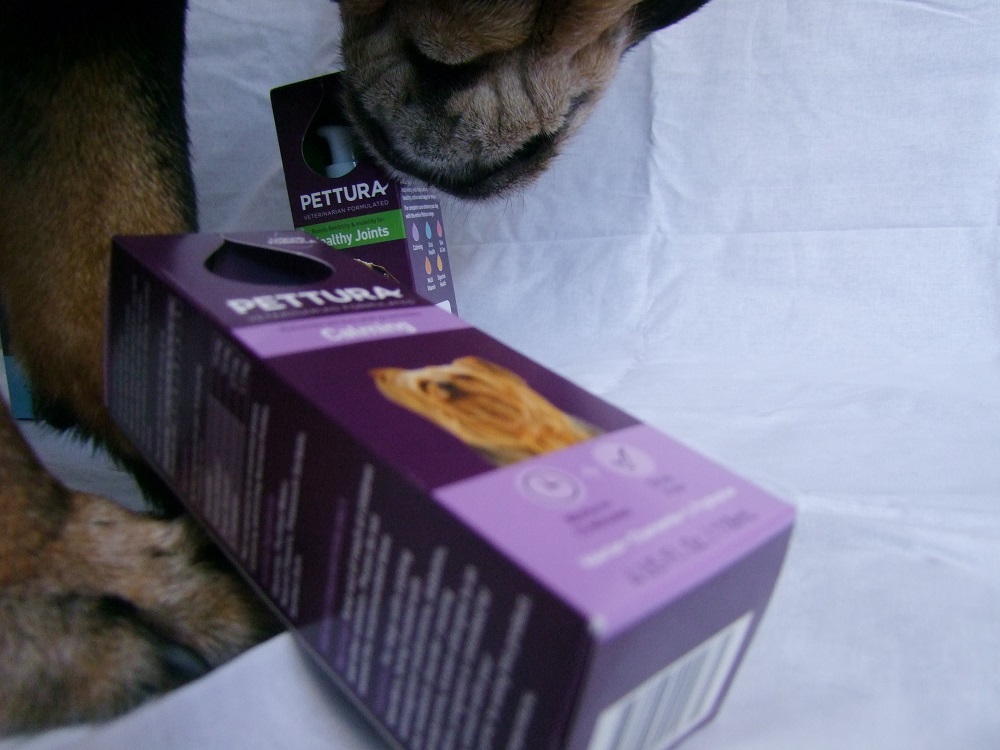 All bottles and extended products in the Pettura range (which you can see online) are colour coded so if you have more than one opened at home, as we do, then it keeps things nice and simple. 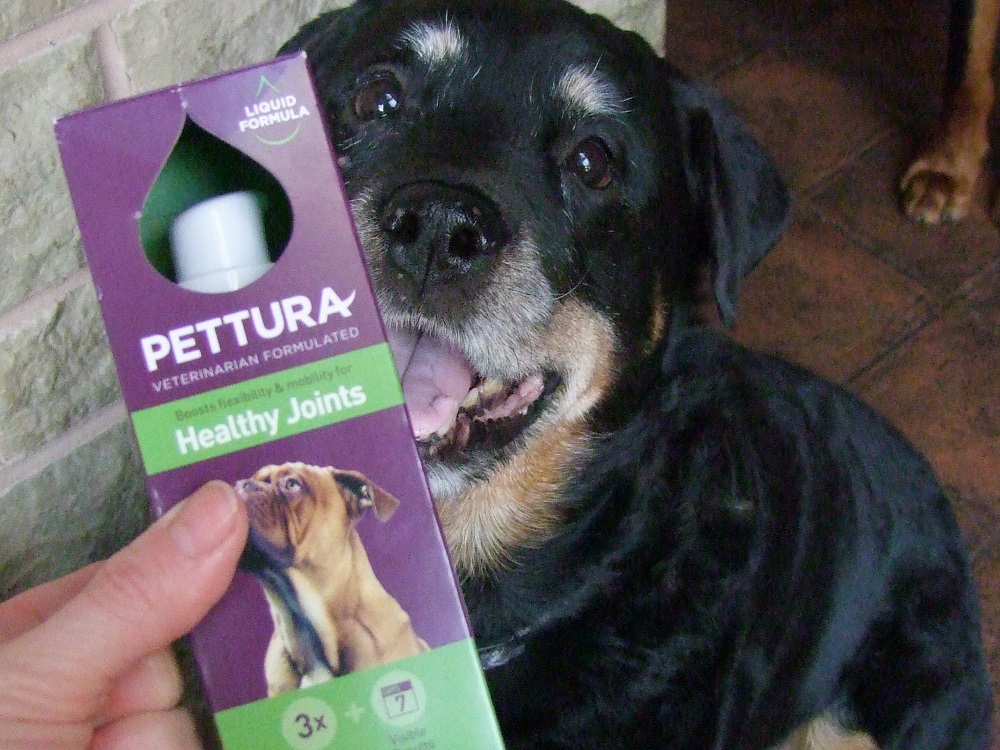 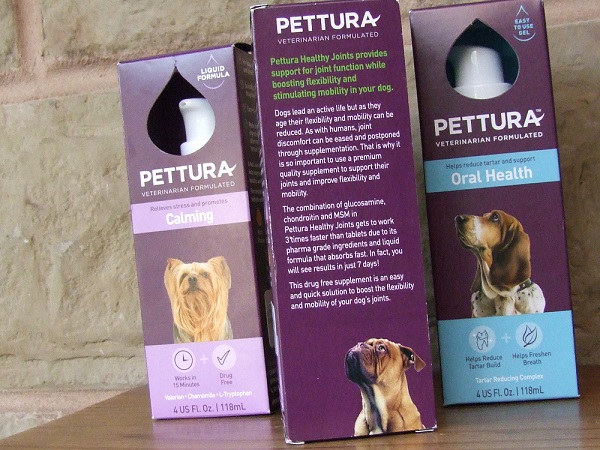 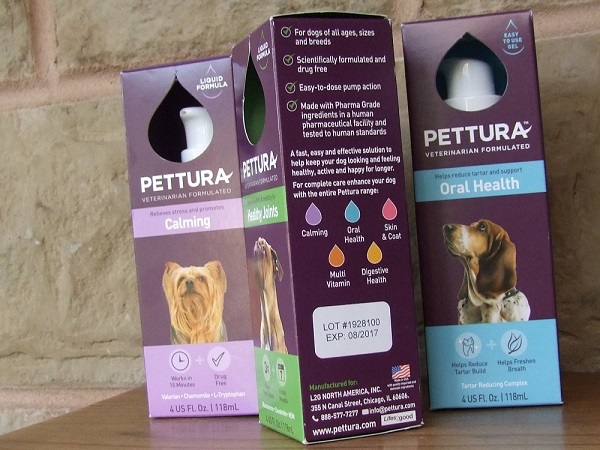 Taking the Healthy Joints supplement out of the parcel we learnt that it is drug free and noted the claims that it works 3 times faster than tablets, due to being liquid it absorbs quicker. It also shared the news that other pet owners have seen results within 7 days. This all sounded great.

The liquid supplement is veterinarian formulated and suitable for dogs of all breeds and sizes and includes these key ingredients: 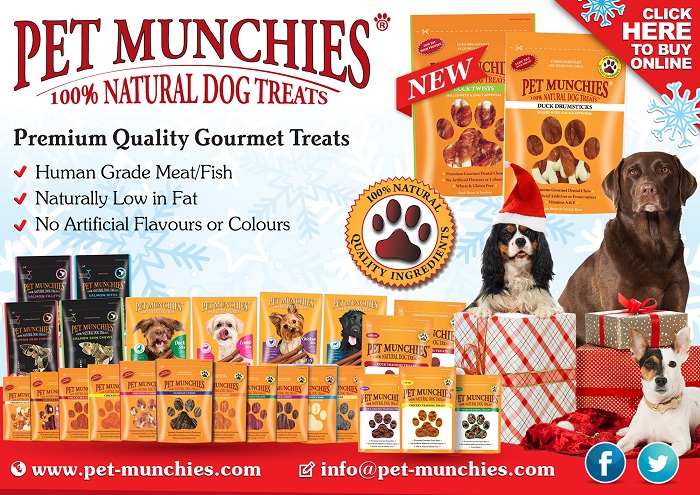 As a liquid supplement, the formula is easy to add to your dog's food and using the dosage table on the box we discovered that Mia should have two pumps in her food. 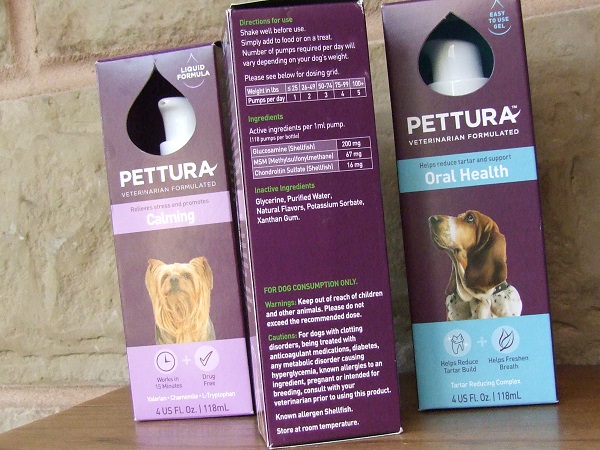 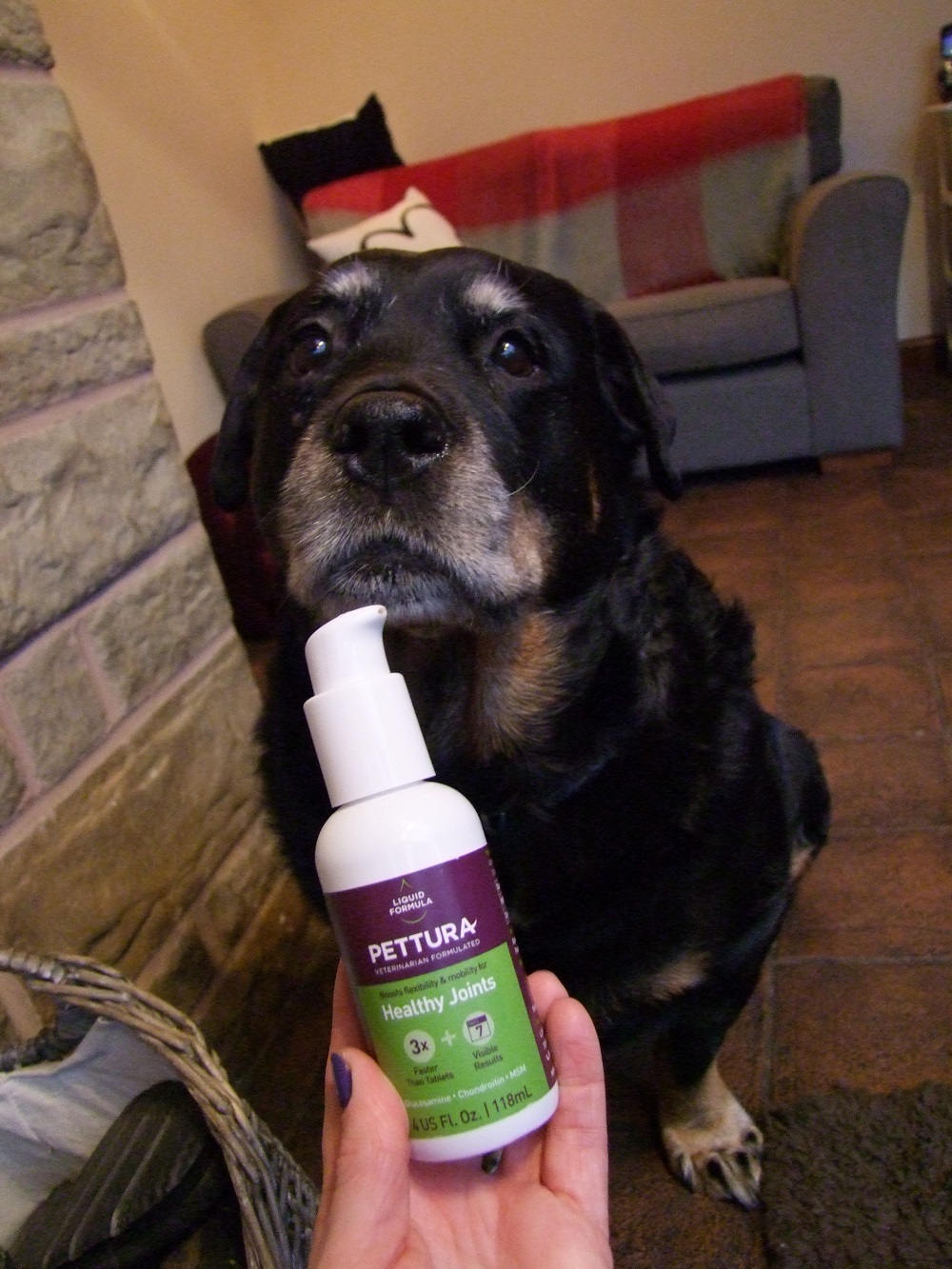 We chose to give her daily amount all at once rather than split per meal.

Shake well before use but once you've pumped what you need, simply turn the nozzle and you can lock the bottle keeping the remaining liquid safe and secure. 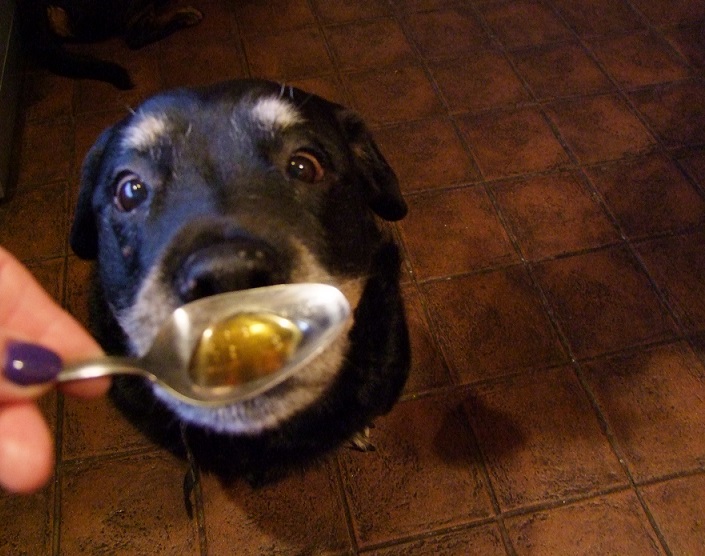 Unlike the boys, Mia's really not fussy about her food. They taste every mouthful and are particularly fussy, Chris in particular (even though he seemed to be quite keen to try this, pictured below). 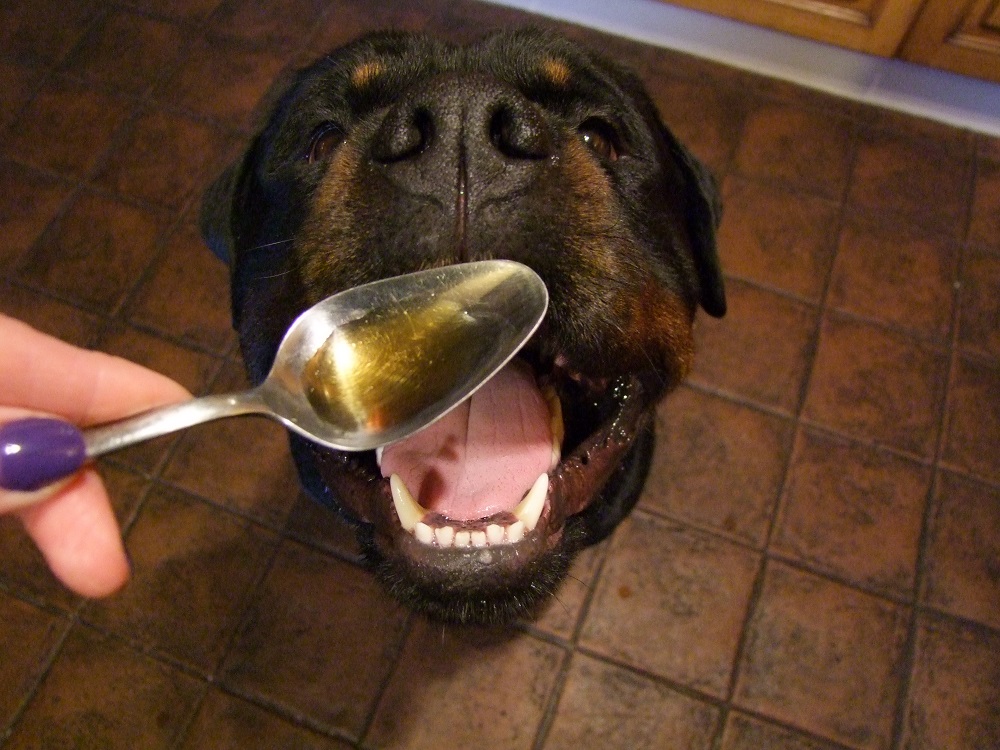 Mia's on a specific diet for older dogs and being much smaller than them, her portion sizes are less than theirs so she finishes first every time. Because of this, as soon as she's finished hers, she makes her way round to Danny to intimidate him out of his food (she generally can so we have to be on hand to intervene and hold her back - it's like a Saturday night scene 'leave it Mia, you've had enough'). 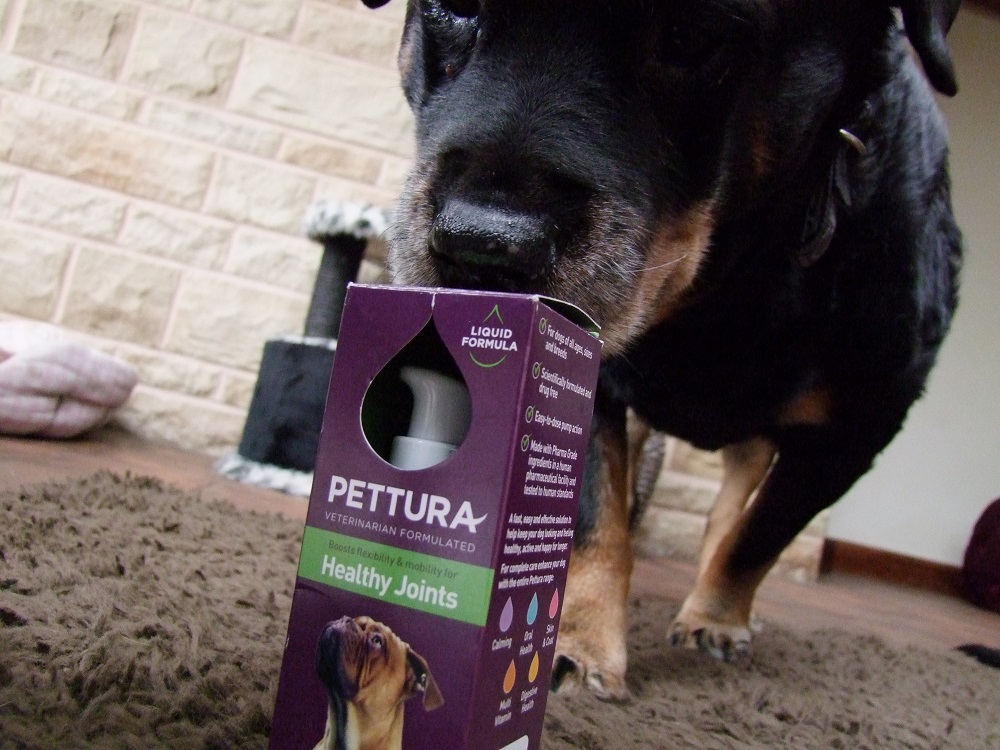 We have been trialling for more than 7 days and in the interests of fairness, we took a break between giving her green lipped mussel and starting this supplement.

Over the course of her trial, she has seemed much more lively and is getting up easier and so even as the weather turns cold and concerns over joints and mobility grow, she seems more sprightly which is exactly what we were hoping to find in a new supplement.

At home, this is shown mostly through the speed at which she'll run to her cherished pet treat cam. Out and about we've judged this based on her energy levels while walking or chasing a tennis ball.

Thanks to Pettura for sharing three liquid supplements from their core range. For more information and to read other reviews on the Healthy Joints supplement and whole range, visit www.pettura.co.uk. Or you can find online with other retailers, such as Fetch.co.uk or Amazon.co.uk, where you can order with Prime delivery.