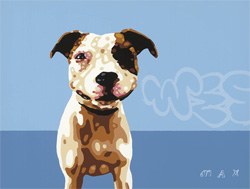 In the last few months, the papers have been rife with stories about 'bad breed’s' of dogs attacking and mauling, the most common breeds having fingers pointed at them being Bull Terriers and Rottweilers. Often a week doesn’t go by without the paper’s highlighting the ‘devil’ or ‘demon’ dogs and the ‘heroic’ family member who managed to prize the crazed dog off the victim and save them.

Obviously, I am sympathetic to anyone who has been attacked by a dog, or even witnessed an attack, but living in an area where having a ‘tough’ dog is a must-have accessory, I have witnessed the way these dogs brought up, and I must say, these dogs are a victim also, writes Danielle Tinning.

Having owned Staffies and English Bull Terriers my entire life, I couldn’t disagree with the misconception of their nature more and stress how fantastically well my first pet at the age of two, Chloe (a Staffie), put up with my constant tail pulling and general pestering.

When I delve deeper into the background of these dogs that have snapped and attacked, I can’t help but see a reoccurring pattern: most of these dogs are owned by yobbish boys ( occasionally girls ) who haven’t had the inclination to look after these dogs properly, even encouraging them to be aggressive, and some have even engaged their dogs in the sick world of dog fighting.

Not far from where I live, a man strangled his Staffie with his bare hands after it started attacking partygoers in his home. It made the front page of the local paper and the man was made out to be a hero, who carried out a remarkably brave task when his dog went mad for ‘no reason’ whatsoever.

Only later did it come to light that the dog had been given an ecstasy tablet for the partygoers ‘entertainment`, but this did little to salvage any public sympathy for the dog. Another story from my area would be about the English Bull who mauled a young girl ( who survived ), who was simply playing in the garden. The dog was destroyed immediately and no police action was taken against the owner, who reportedly used punching and kicking as a way of disciplining the dog. There are many more stories like this that back my theory about owners, especially where I live, where dog fighting is rife.

Like I said, I have total sympathy for anyone affected by dog attacks, but I firmly believe the blame should be shifted away from the dogs 'inevitable violent nature’ and instead shifted towards the way they have been brought up. The saying “there’s no such thing as a bad dog, just a bad owner” has always struck true to me. The bad wrap these breeds get is totally undeserved, like my Staffie cross English Bull, Buster, who is the most loving dog (and he adores children), but people are very wary of him, going as far as picking their own dogs up off the floor when he walks by!

To further back up my theory of the type of owners these breeds attract, I am constantly getting offers from young boys who I pass in the street, to buy my Buster, for hundreds of pounds to use him for dog fighting or to breed ‘fighting dogs‘, to which I reply with an abrupt “no”, although I would love to give them a much more stern answer to their ridiculous brazenness, I do restrain myself.

I would love nothing more than to change people’s perception of these breeds, but that can only happen when these idiots are banned from keeping such dogs.

In this article:
3 Comments

What Does a Japanese Knotweed Sniffer Dog Do?