I am a historian of science and medicine who became interested in dogs through studying rabies in Britain in the century before it was eliminated in 1902.

There were no clear-cut answers. Though much feared at the time, rabies and its human form hydrophobia occurred only sporadically, and records of the type of dogs were inconsistent, writes Michael Worboys.

What stuck with me was the number of different dog breeds recorded and what was said about them. When I looked what had been written on the topic, there was very little. There was vast literature on all things Victorian – except their dogs. Surprisingly, there was no history of the dogs in the “nation of dog lovers,” so it became my next research topic.

In ‘The Invention of the Modern Dog: Breed and Blood in Victorian Britain’, which I co-wrote with Julie-Marie Strange and Neil Pemberton, we show that the momentous changes occurring in Victorian society directly impacted upon the nation’s dogs.

In other words, the Industrial Revolution co-existed with a Canine Revolution. You might have been surprised that we write about the modern dog’s “invention,” however, Victorian dog fanciers were more direct, often speaking of its “manufacture.”

Firstly, and in the spirit of the age, Victorians saw themselves as involved in the improvement of dogs. They celebrated the novelty of their new designs, their power to transform existing breeds, and even to resuscitate extinct breeds, as in George Graham’s controversial resuscitation of the Irish Wolfhound.

Above all, they invented the idea of dog discrete breeds and then produced, by selection, cross-breeding and in-breeding, dogs to the physical standards they had defined. 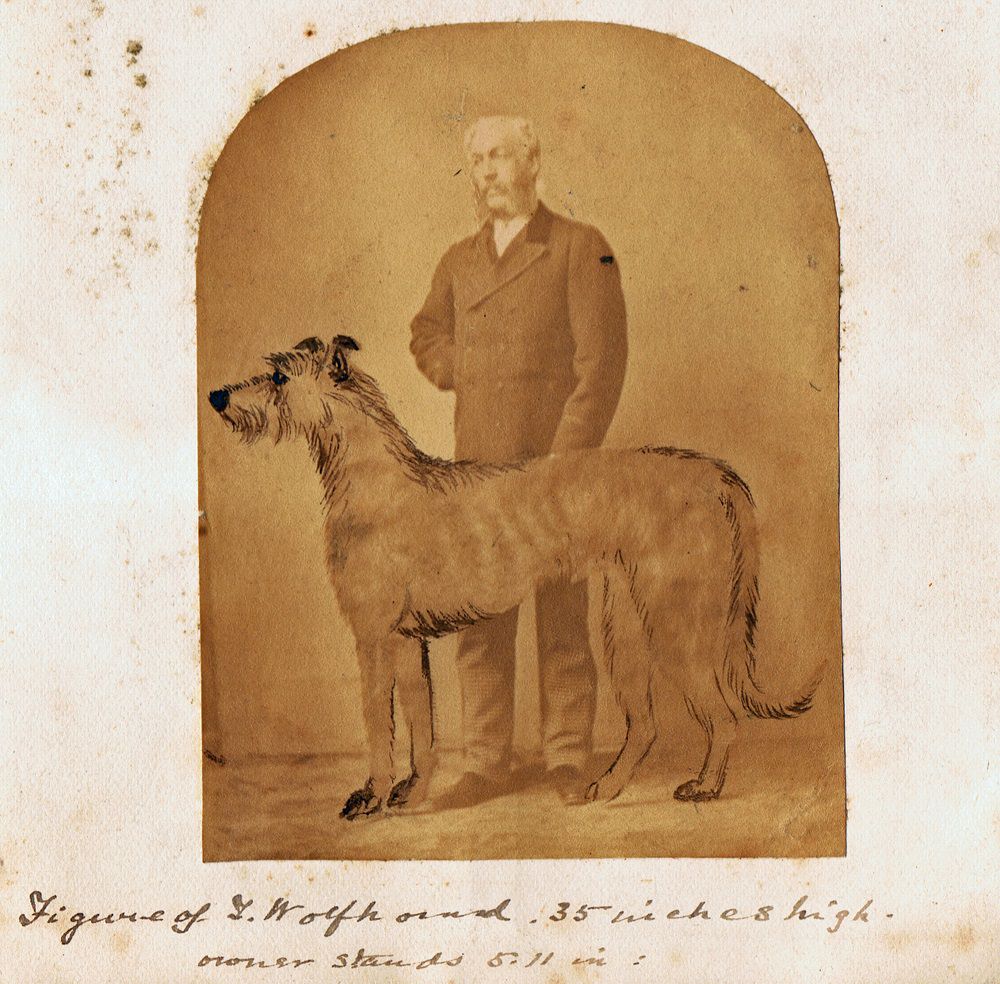 Graham with a drawing of the model to which he bred his ‘resuscitated” Irish wolfhound. He is alleged to have begun his breeding programme with Scottish deerhounds, which he then crossed with Great Danes for size, Tibetans for coat, and Borzois for physique until he reached his ideal. Image courtesy of Elizabeth Murphy.

Secondly, the Victorians defined their physical standards (conformation) in terms of anatomical points breeds. This development was driven by conformation or fancy dog shows from the 1860s in their competitions to determine the best in each breed – the dog most closely matching the ideal.

There were disputes over judging, and particularly when a dog won a show in London one week, only to come last in Manchester the following week. Victorian dog owners believed national standards were needed (as with time introduced due to the railways in 1847) and national rules (as with football from 1863). The goal was, say, that Pointers across the country would increasingly conform to the breed standard (as nuts, bolts and screws with the Whitworth thread from 1841), leading to a more uniform breed population. 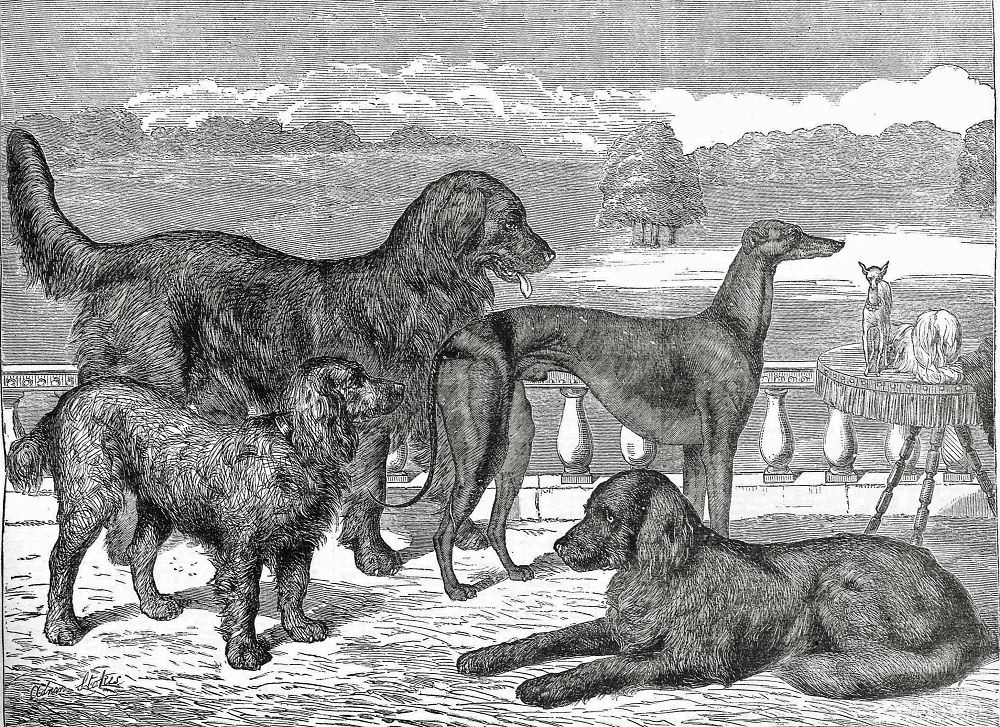 Thirdly, dog shows borrowed many of their rules and approaches from livestock shows, as well as the term breed. Before dog shows, many terms were used for the different types of dog: breeds certainly, but also kinds, races, sorts, strains, types and varieties. However, from the 1860s breed dominated.

With livestock a particular physical form was an indicator function, for example, pigs producing lean meat and cows high milk volumes. With dogs, conformation became an end in itself, with ability and character, which formerly had been the defining feature of types of dog, at best secondary. Top dogs became commodities, bought and sold, and hired out for stud duties, for often very high amounts.

Fourthly, competition at dog shows and in the market of sales and stud fees, drove product differentiation, seen in the proliferation of breeds and the favouring of distinctive features. The number of types of terrier increased and forms changed too, with some shrunk in size and others given exaggerated coats.

Before the adoption of breeds defined by conformation, the types of dogs were like the colours on a rainbow: there were distinct types, but they varied within type and merged into each other at the margin. After breed, types of dog were like a modern paint colour card: distinct, separated blocks of uniform colour. The multiplication of breeds mapped on to society: sporting dogs for the landed classes; fashionable breeds for the middle class; no-breed dogs for the working class; and a separate sphere of toy breeds for ladies.

The favouring on exaggerated points was captured in a cartoon by George Dumaurier showing the “Dog Fashions for 1889.” 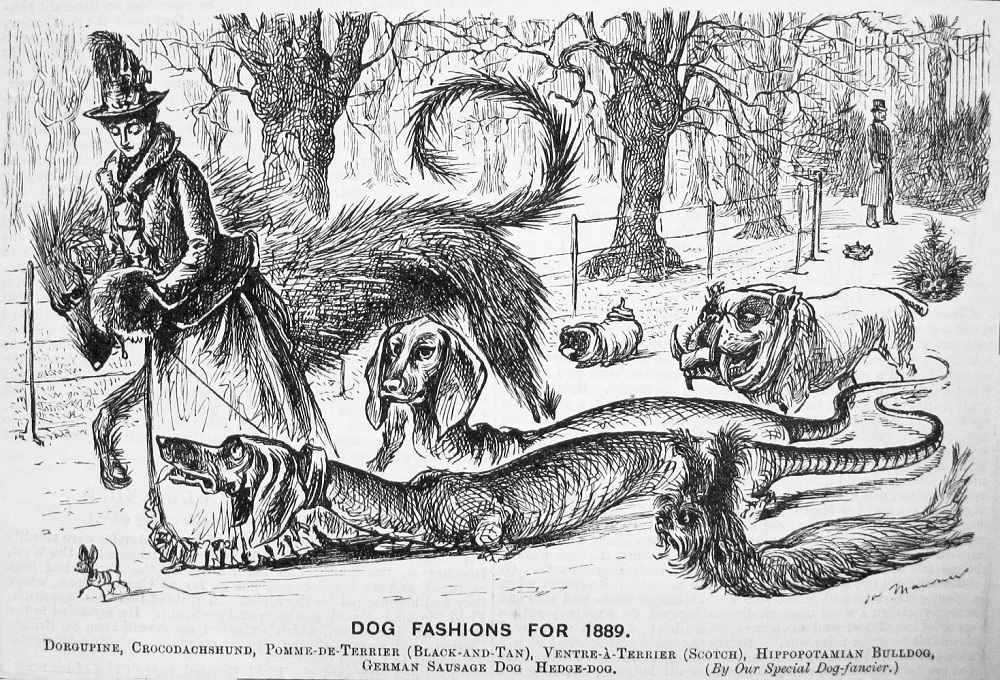 He drew, amongst others, a Dorgupine, Crocodachshund and Hippopotamian Bulldog. He was also reflecting the growing involvement of women in dog shows and the presumed feminisation of certain breeds. The shrinkage of many dogs into “toy” forms, “little monstrosities” that looked “like embodied imps of weak mind.” He went on that these dogs were delicate and nervy, with “bulging heads, indicating weaker brains, protruding eyes and shaking limbs.” But all dogs were affected, even the largest.

In 1894, the leading dog expert Vero Shaw complained that the Mastiff, which had once been able to tackle bears and lions, had become “a leggy, loose jointed, flat flanked, slack boned creature,” with the head of a Bulldog, the coat of an Italian Greyhound, and “the disposition of a congenital imbecile.”

Lastly, to reach the best conformation standards, breeders sought to breed from the same prize-winning dogs, which meant inbreeding was common. The practice was also due to breeders wanting dogs with pure blood, evidenced in pedigrees.

These were often presented in charts like those of aristocratic families. Pure blood was valued as the best guarantee of prepotency, i.e. the likelihood that a dog or bitch would pass on their features to their puppies.

However, breeders recognized that inbreeding could be taken too far, and many dogs were said show physical and mental weaknesses. When health problems were evident, the breeder outcrossed with an unrelated dog or even another breed. They were confident of returning to the original breed type by close breeding with the original type.

The best-known example in the Victorian era was when Everett Millais crossed one of his degenerate basset hounds with a much larger bloodhound, and returned to the basset hound type, now with new blood, in just four generations. 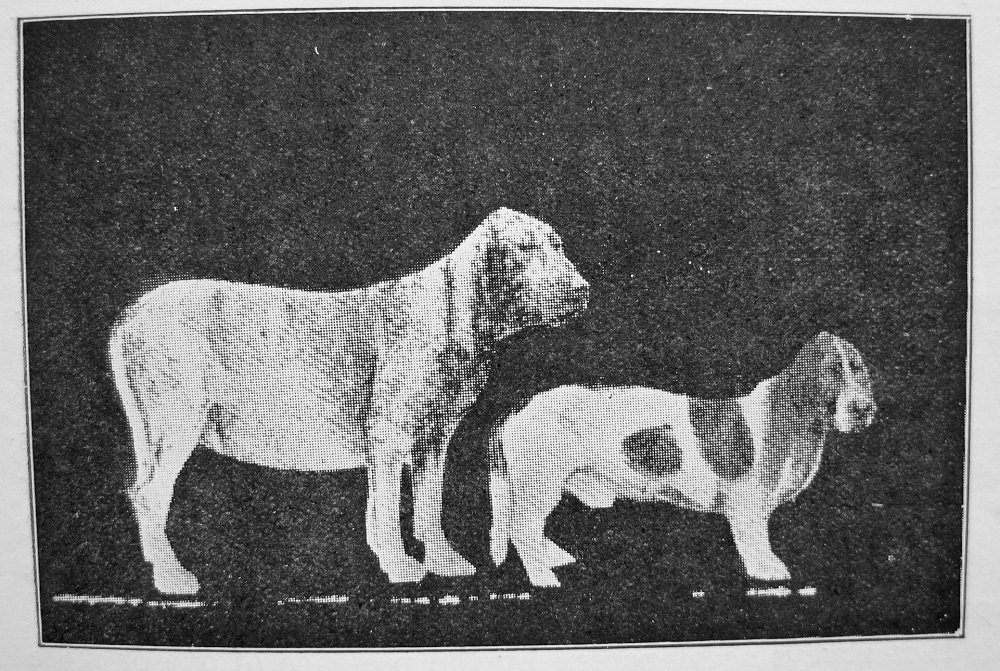 The changes wrought on dogs in the Victorian era were revolutionary: first, with the very adoption of breed as way of thinking about and remaking varieties of dog; and second, with the material remodelling of dogs’ bodies, and, wittingly or unwittingly, their character, behaviour, and genetics.

Kennel clubs across the world, responding to the recent critiques of “pedigree dogs,” have begun to alter the conformation standards of some breeds and encourage genetic diversity. It remains to be seen how radical these changes will be.

Our book, by showing the historical contingencies that shaped the invention of the modern dog, can be read as giving license not only to the remaking of individual breeds but to reimagining the very category of breed itself.

Michael Worboys is emeritus professor in the Centre for the History of Science, Technology and Medicine at the University of Manchester. He is the co-author of Rabies in Britain: Dogs, Disease and Culture, 1830–2000. 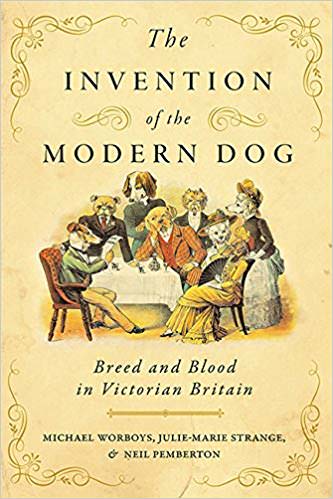