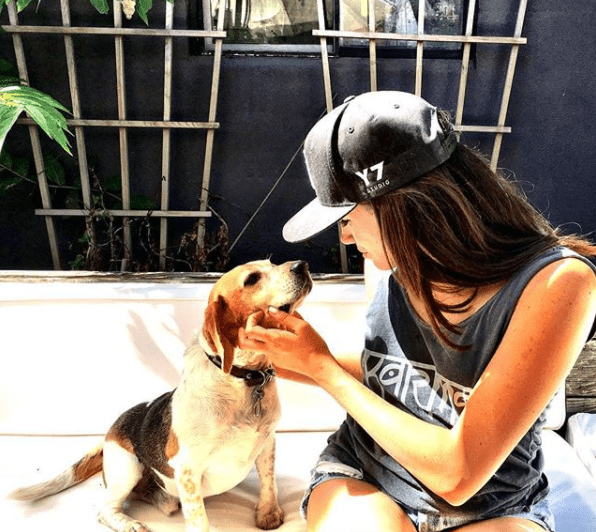 Meghan Markle is a long time supporter of dog adoption, which makes her pretty perfect in our eyes already - but the fact that it's being reported that concern over her dogs coming to the UK and settling into palace life tipped reporters off that an engagement announcement was pending, tells us just what her dogs mean to her.

Here's what we know about Meghan Markle's dogs:

She owns two dogs, Guy, a Beagle and Bogart, a Labrador cross.

Up until December 2016, the dogs she describes as her 'loves' were regularly featured on her social media pages.

Guy, wearing a Union Jack jumper previously owned by Bogart as a puppy was the last photo the actress added of her dogs in December 2016.

For the love of hand-me-downs. This was Bogart's sweater when he was a puppy, and now it's keeping Guy warm. #puppylove  #adoptdontshop #reducereuserecycle

A month before, she posted this cute photo of her dogs curled up on the sofa in a moment of zen.

A moment of zen #adoptdontshop #weekend

And this photo captured the actress (soon to be princess) sharing a car journey with her loves enjoying a Sunday off.

While her life is about to change forever, it seems clear the love she has for all animals and her boys won't change one bit - but sadly it appears Meghan had to make a choice to leave one of her dogs behind and only Guy has made the trip to England.

Oh, my boys. This pic says it all. Bogart & Guy. 😂 #adoptdontshop #thelookonbogartsface

During an interview with the BBC's Mishal Husain talking about her engagement to Prince Harry, she revealed: "I have two dogs that I've had for quite a long time, both my rescue pups. And one is now staying with very close friends and my other little guy is, yes he's in the UK, he's been here for a while. I think he's doing just fine."

Me and my guy. Good to be home. #snuggles #homesweethome #adoptdontshop

In This Issue... Talking Point: The Scientific Reason Why You Should Smile at Your Dog Every Day Health: What Plants Are Poisonous to Dogs?...

As pet parents, we wake up each day hoping to make our dog's day as good as it can be. Whether it be walking...

If You’re Thinking About Getting Your Dog an Automatic Tennis Ball Thrower, Read This First

With Christmas around the corner, we've decided to up our review game to share more ideas of things to do, places to go and...