In 2005 K9 Magazine's Kim O'Meara was lucky enough to be given the chance to interview pop diva and music icon Mariah Carey ahead of her album 'The Emancipation of Mimi' being released.

Take a trip down memory lane with us as we ReWIND with Mariah!

Tell us about your dog!

My pet’s name is Jack. He’s a Jack Russell who can swim underwater, jump four feet in the air and he is eternally two years old. His full name is Jackson P. Mutley.

Why the full name?

(Laughs) It’s kind of a long story. The name evolved over time. I don’t even know what the P stands for but I guess you can imagine. 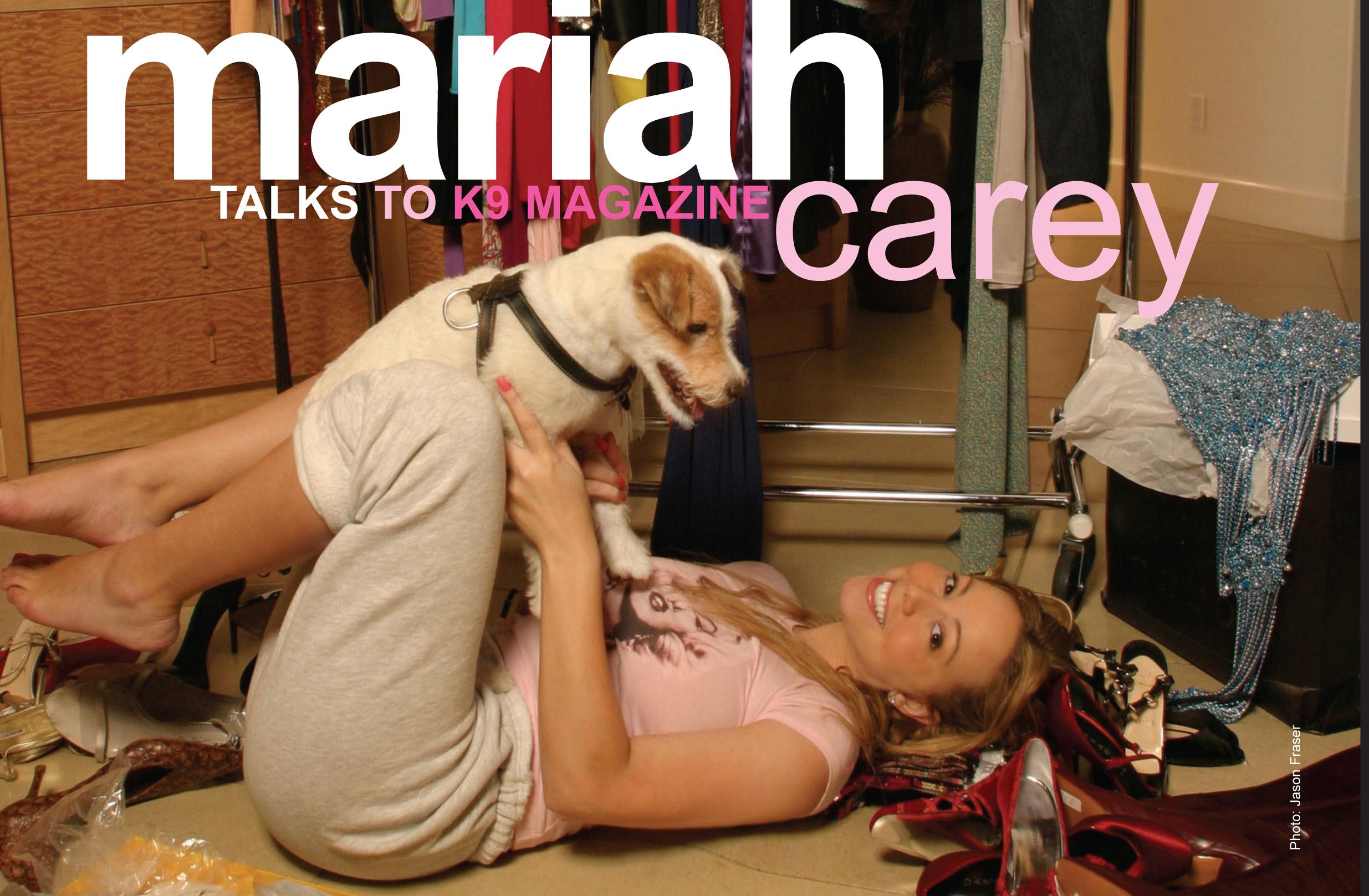 Well my mom always had pets and so there were always animals around and there’s never been a time in my life where I didn’t have a pet. I had dogs and cats and even birds. My moms parrot bit me (laughs) and he used to torment me by saying my name like my mother would when for example she was calling me to come downstairs. So in the middle of the night the bird would be shrieking “Mariah!”

Your latest album “The Emancipation Of Mimi” has had some fantastic reviews and has been a huge success, what would you say is your favourite track from the album and why?

I have a lot of different favourite tracks because they’re all representative of different moods but I really love “Shake It Off.” Obviously, “We Belong Together” has a special significance for me – you know just by being the success that it has been and the emotional vibe of the song.

I would also say that my favourite song is “Fly Like A Bird” which is the last song on the album and a favourite because it has a very spiritual message and it’s close to my heart.

We’ve heard your favourite childhood memories are various junior high antics, can you recall a specific moment which you would like to tell our readers?

Well, one time when I was 12 years old I dyed my hair orange by mistake and it looked really hideous. My hair was blonde when I was little but it started getting darker so I started using Sun In which is supposed to bring out the highlights in your hair. However, I didn’t know about the whole technical side of hair colouring as I hadn’t been to beauty school yet.

Anyway, it made my hair kind of orange, so then I tried to correct the colour and went to the store with my friend to buy a golden blonde dye. I didn’t realise though that anything that says gold means it’s a red base! So I used this dye and was blow drying my hair with an orange blow dryer when my friend yelled “Your hair is the colour of the blow dryer!”

I then walked outside and there was this kid there that I had a crush on and he was like “What happened to your hair!” It was a  totally bleak moment. On top of that I had also shaved my eyebrows because I didn’t know that you were supposed to tweeze them and the only make up I really had was reject stuff from my mother so I had no eyebrows, hideous make-up with blue eyeliner and
orange hair – not a good look! (laughs)

They don’t judge others.

Will you ever bring Jack to London?

I would love to but there are rules about quarantine for animals and I don’t think that it’d be right to do that to him. It’s 6 months -I’d never do that to him.

Does Jack ever bite or chew your shoes?

You’ve received numerous prestigious awards over the years including two Grammy’s, 8 American Music Awards and were also named the “World’s Best Selling Female Artist Of The Millennium” which must have been a huge moment. How did you feel when you received your very first award and what were the thoughts which went through your mind when your name was called?

I don’t think I was fully aware of that moment because so much was going on and I didn’t really take it in. I knew that it was a big deal but it just happened so fast and I was really nervous too.

It was said some time ago on a well known British sit com that the perfect woman would have Kylie Minogue’s bum, Claudia Schiffer’s legs and Cindy Crawford’s face. Using this logic, can you please create your own perfect fantasy dog?

There is no better dog than Jack. How could you make a dog better than Jack! (laughs)

Tell us about the Relly Award that Jack was nominated for?

Well Jack was nominated for this Relly Award on the Regis and Kelly show for Best Non-Human guest. The nominees were Chewbacca, Miss Piggy, Barney, a two headed albino snake and my dog Jack.

I thought that it was so cool that Jack was being nominated for an award and that people all over the world were finally going to be able to see the splendour of him.

So there I was being so excited for Jack and then all of a sudden I found out that Miss Piggy won the award! I’m really seriously considering demanding a recount because I think that some trickery went on!!!….. (Laughs)

What did Jack do when he was on the show?

Well Jack was with me for an interview. He’s like a person and he just knows when the cameras go on. He starts hamming it up and jumping up and down. On Regis and Kelly his personality just shone through. I think that when the viewers saw him on the show they realised that he was special – I mean he received a nomination against mainly fictitious characters. He was the only
real animal - other than the 2 headed snake.

Jack’s used to the limelight though and he loves being on set.

He’s actually been in quite a few of my videos including “Dream Lover”, “All I Want For Christmas is You”, “Always Be My Baby”, “Honey”, “Thank God I Found You”, “Against All Odds” and “Boy I Need You.” He loves walking around the wardrobe department, he likes the dog equivalent of hair and make-up (grooming). He is a star.

Big dogs or little dogs - That’s what I love about Jack. He’s like a big dog in a small dog’s body. Also he’s very strong and very muscular but small enough that he can lie in a bed and small enough that I can take him out with me easily.

Pedigree dogs or x breeds - It really depends on the dog.

Lead and collar or dog running free - Dog running free but the problem is my dog gets a little excited (laughs) and he needs to have his harness on all the time because you don’t want him to choke with the collar. He happily wears the harness and likes it so if he gets carried away or if he stays in the pool too long it’ll help us get him out.

What is you earliest memory of dogs?

When I was little my parents were breeding Dobermans and when I was about four the dog had puppies. I remember all the different puppies. My parents gave the puppies away but kept one which we called Bruno.

Laughed out loud because of your pet - All I have to do is think about Jack and he makes me laugh. He’s hilarious. Actually I laughed out loud yesterday because my friend Connie said she wanted to meet Jack. She’s never met him because she lives here in London. Anyway when she said this everybody in the room turned around and said “You don’t know Jack?” as if he was you know the most well known person on the face of the earth! I’m telling you people just love Jack and I’m not just saying this because he’s my dog.

Trained your pet to do something new - We’ll we’re working on him being more gentle when I hand him a treat. (He got used to me accepting the fact that he’s impatient when he wants a treat, and you know, he’s got some sharp teeth.) He’s just learning to calm down and allow me to give him the treat nicely otherwise he’s not going to get it. He’s doing ok too but it depends on his mood….

What is it about Jack’s personality that makes him so special?

He is almost like a person, we have this thing where we say Jack is a person because it’s like he’ll just hang out and want to be almost a part of the conversation - just sitting around and watching. He’s a very spiritual animal, he has a lot of zest and he’s fun. In fact he’s almost like a circus dog with all the tricks that he does. The other side of him is that when he’s laying down and you pet him he’s very loving. He’s a good dog, a good boy.

Jack is a swimmer so he gets obsessed with anything to do with water even if I’m taking a shower he’ll try to knock on the door and come and stand in the shower. If I’m running a bath all of a sudden I’ll hear a splash and Jack will have jumped into the tub!

It’s something that’s been happening for years and it’s like “Jack’s in the tub again!” and there he is swimming around!

His favourite toy is the jet inside the pool – like the jets you find in pools and hot tubs. He treats that as his toy and continuously dives under the water and tries to bite the water coming out of the jet. As far as other toys go you can’t get Jack anything that’s too easy to rip apart because he’s got very strong teeth. He has a toy steak. It’s a fake looking T-bone that’s really tough to rip apart. It has lasted a while but I think that it’s finally on the way out.

What about Jack’s bad habits?

Well… Lately he’s been sneaking out of the gate. There’s a railing on the side of the kitchen in the house in Los Angeles and I thought that I could leave him out there so that he could run free in this little area – and he was really enjoying himself running after the little geckos and stuff.

Then one day I was out in the back and I see Jack coming out of nowhere and I realise that he had snuck under the fence and run straight for the pool and jumped in. So now I can’t let him stay out there anymore because there are coyotes and things.

Instead he’s given supervised pool time.

Who is your hero?

I thought this was about dogs? OK Jack’s my hero.

Would you describe Jack as a ‘people-dog’?

Definately. He loves people. Sometimes he plays rough as he grew up with Doberman Pinchers and thinks that he’s a bigger dog than he is.

Many thanks Mariah - you're a true celebrity dog lover and we're honoured you took the time to speak with us.

Keep up to date with everything Mariah Carey on her official site www.mariahcarey.com