Lizzy starred in Nickelodeon’s "Nicky, Ricky, Dicky & Dawn" telling the story of quadruplets navigating life as pre-teens as ‘Dawn,’ the only sister amongst them. Lizzy has been nominated three times for a Kids Choice Award for Favourite Female TV Star. Her other television credits include a lead role in Nickelodeon’s TV movie "Tiny Christmas", and guest-starring spots on Nickelodeon’s “The Thundermans” and ABC’s “Damaged Goods” alongside Anna Camp and Justin Hartley.

Lizzy took time out to talk to K9 Magazine about her deep passion for dogs and the inspirational role they have played in her life. 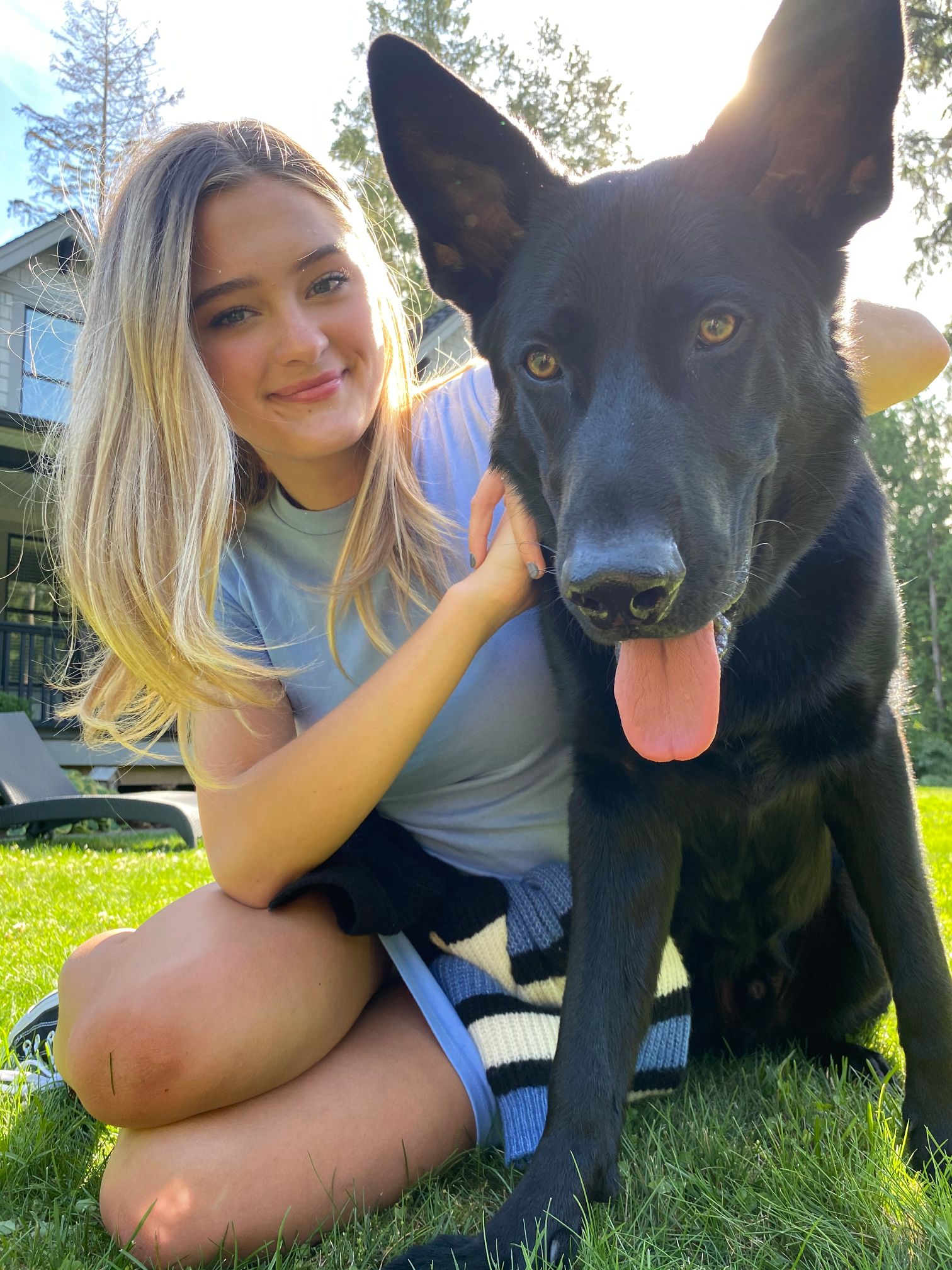 1. Tell us about Kodak - we'd like to know everything about him!

Kodak is an 11 month old Black German Shepherd, who has the personality of a giant. We got him in November of last Christmas, and his parents are from Rep. of Slovakia and the Czech Republic! We searched for months for a German Shepard after a year of the passing of our old pup, Jett.

After Jett we were somewhat worried about the commitment to a new dog, but Kodak has been nothing but amazing ever since we got him. He's our 5th German Shepherd, because we have always been semi biased to the breed, haha. However we have never had such a working dog, so he was a HUGE adjustment for us.

He was born with the energy and drive of 10 dogs combined, so it’s difficult to keep up with his fast paced lifestyle. Which means there are tons of toys lying around the house for his attention.

He does everything 1000% and will tackle you (kindly) if you get between him and his ball. Besides loving to play, he also has to boop you whenever he greets you or passes by, almost like it's his own love language. 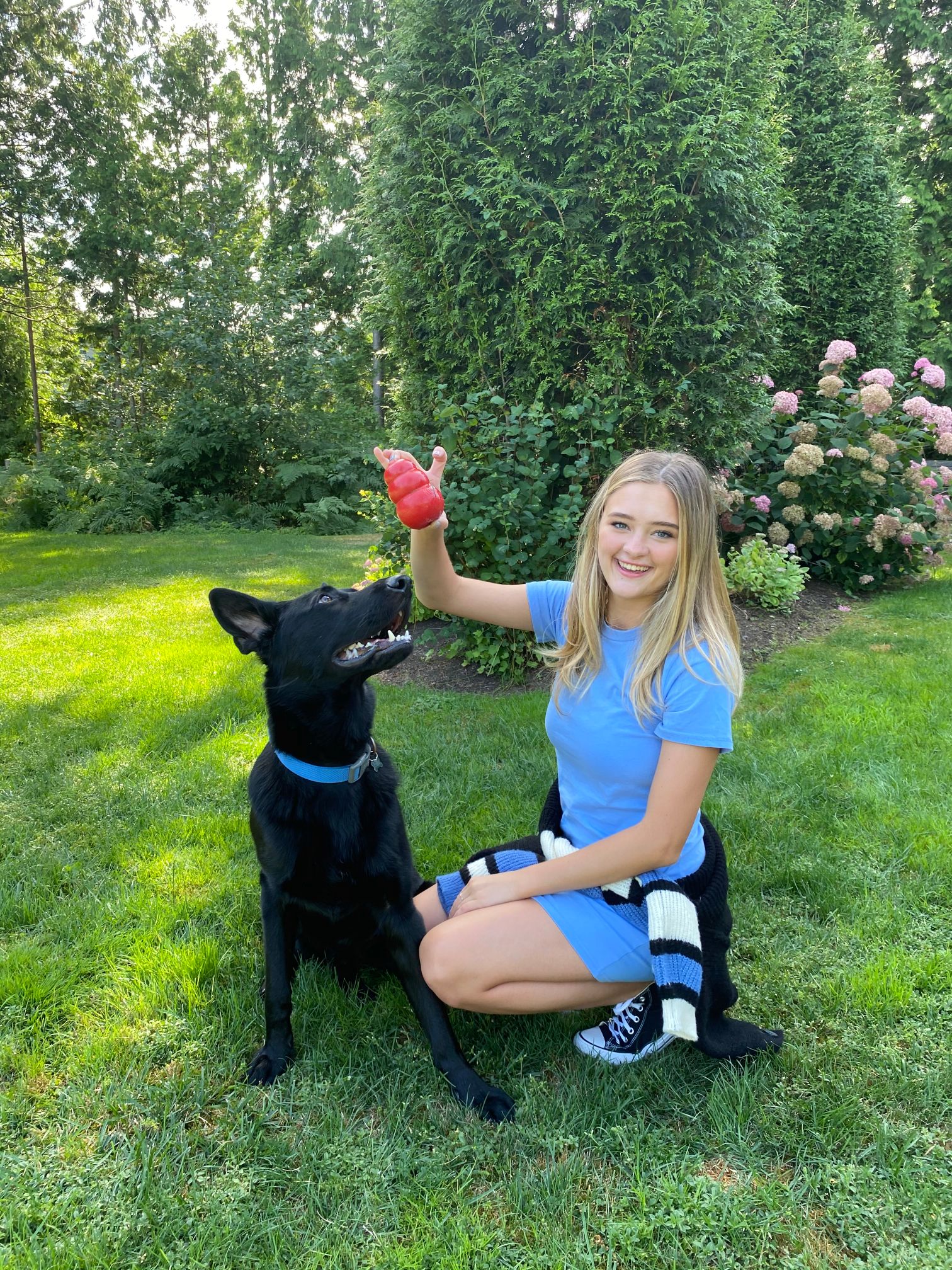 It’s his way of telling you he's hungry, wants to warn you of something, or just wants to say hello. But he's also not afraid to be vocal about what he wants either, once we taught him how to speak he does nothing else!

He's always talking, even when he's got his toys in his mouth. I always find it really funny just how much he speaks.... except when it's 3am. Haha.

I’ve always wanted a dog that I could really bond with - because being away shooting means I miss out on building a good relationship with my pup. So one of the great things to come out of Covid, is how I've had the ability to spend every day with him.

I have to get a Covid test 2-3 times a week for shooting, and Kodak even comes with me then. We are super lucky to shoot in Vancouver beach of the beautiful scenery and abundance of parks and hiking trails, so we get to take Kodak on a new adventure every weekend.

My two other cats are also up here with me too, lulu and coco.

They're also the sweetest little cats too, and they don't go anywhere without the other. I always joke on how many pets we have, but I can't imagine life without one of them. 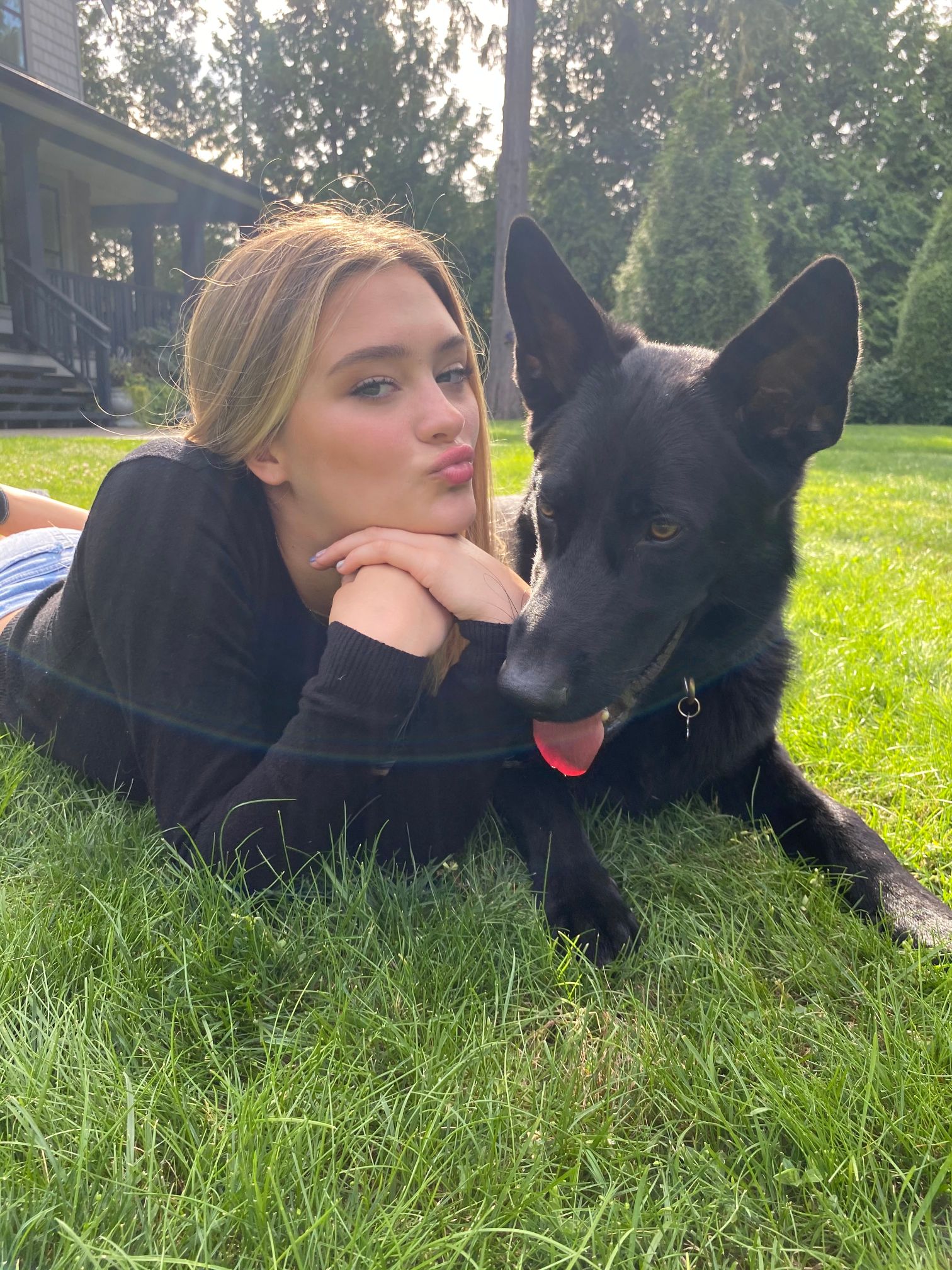 2. We're meeting the gorgeous Kodak with you today. We can see from all the photos of him on Instagram, he has his own huge fan base online, what is it that makes him so special and connects with so many do you think?

He has such a huge personality and is always happy no matter how much trouble he gets into, which is a good amount! I think people love him because he's always smiling and you can really feel his happiness through the screen. He looks as if he would be intimidating - but he's really the biggest softy. He's protective, but gentle - and I think people pick up on that too.

3. What are your favourite things to do when spending time with Kodak? What does he love the most in the world?

Playing ball! I always have to use 2 balls when we play fetch because he's too stubborn to let go of the one he's caught, so I have to distract him with the other in order to get it back. lol 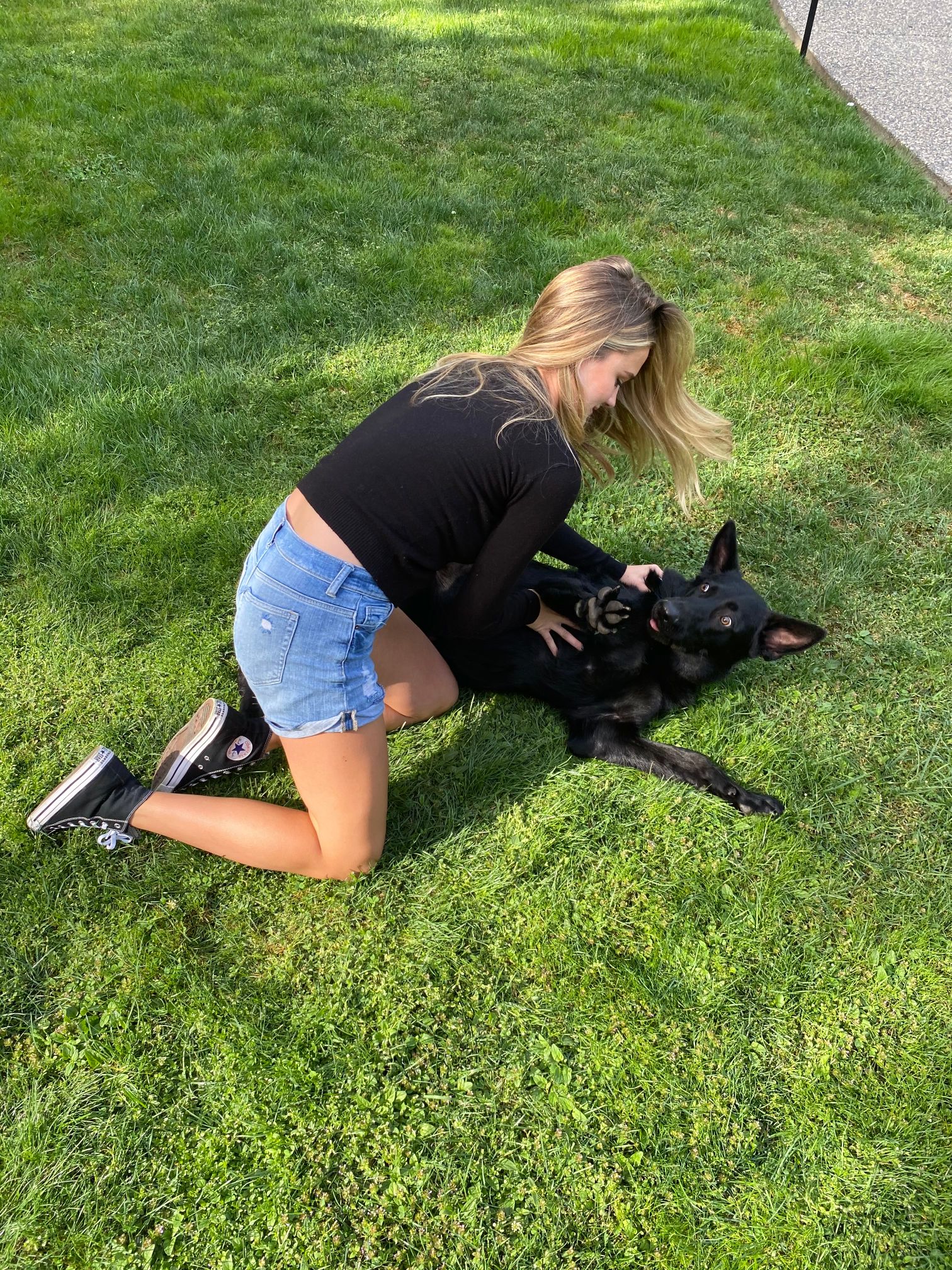 4. For someone so young, you've already had a really interesting career in the public eye. What's that like? What advice would you give to the fans who look up to you and maybe wanted to follow your path?

Thank you! It's been an incredible experience - lots of hard work - but totally worth it. I tell everyone that asks me about how to become an actor to take theatre. It’s single handedly the best teaching and preparation an aspiring actor can get, because of the lessons its instils.

You work in a collaborative environment that teaches you everything you will use later in your career - comedic timing, a good work ethic, listening, respect, and essentially how to become fearless.

I got into the business by taking theatre and improv classes. My director created and wrote all of our productions and had the highest expectations of all of us. So it taught me so many great fundamental lessons.

Actors have to show up 100% prepared, but everyone has to get the basics somewhere. And I learned this all in theater. 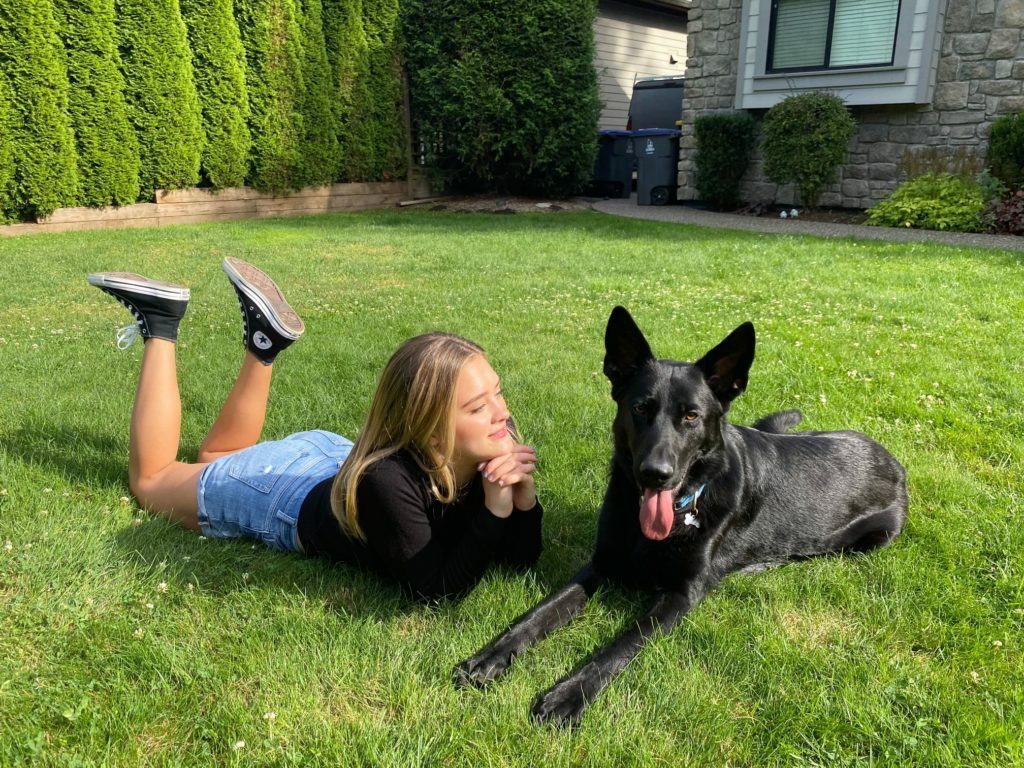 5. Do you have a motto that you live your life by? What would you say your dog's motto might be?

6. If your dog was an actor, who do you think he'd be and why? A brooding, tall, dark and handsome enigma or the guy who plays the goofball characters?

I think he would for sure have the looks and confidence, but his personality would be goofy and energetic. But he would insist on a physical role so he could display his athleticism.

7. If you were to swap roles with your dog for a day, what do you think he'd enjoy most about your life and what would you love best about his?

I think he would love how social my job is and how collaborative it is, plus all the attention he would receive. And I like how he gets to nap all day. Haha. 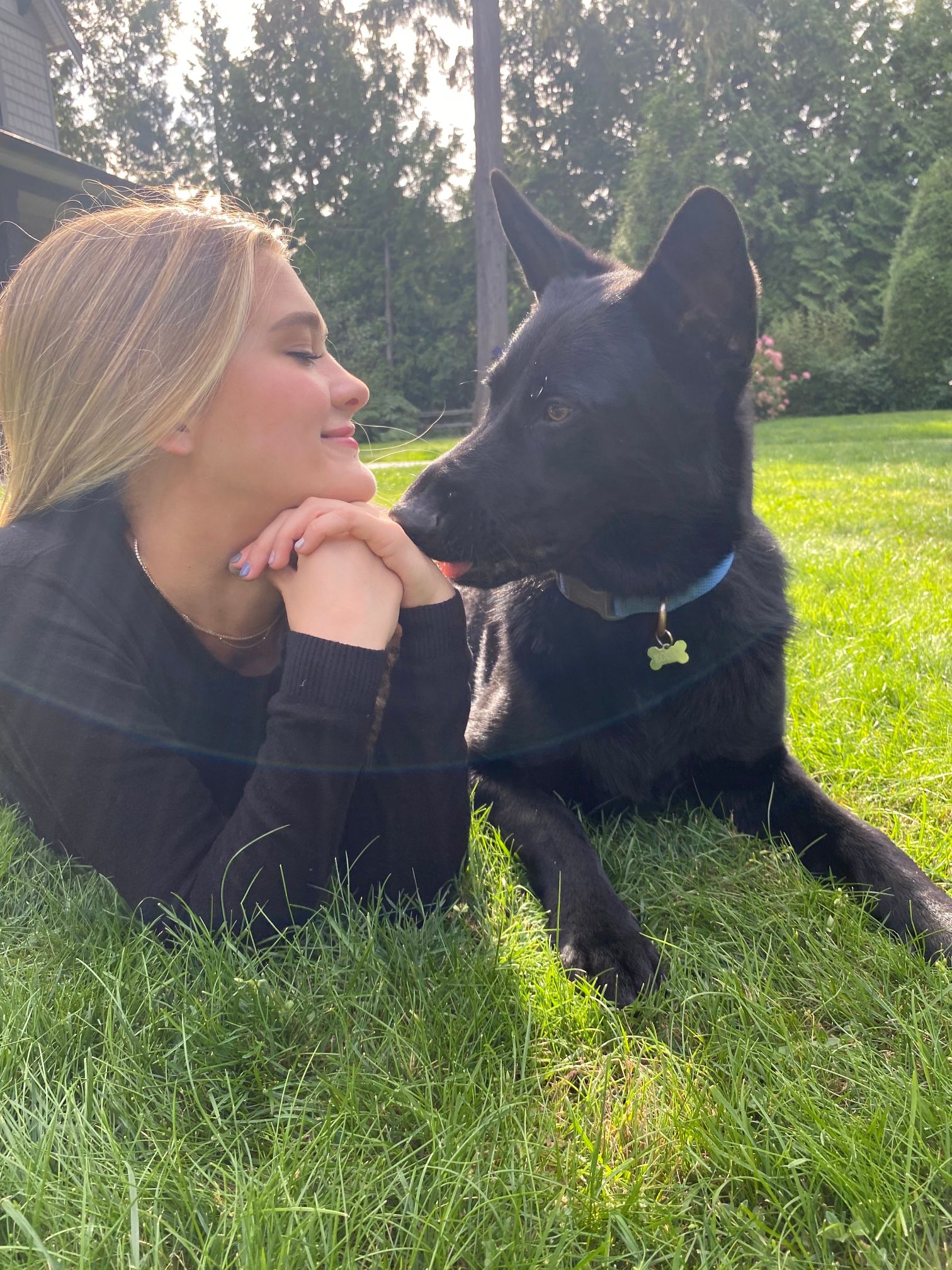 8. Here are our quick fire questions, are you ready?

I love big dogs, because they're like big babies, and think they're smaller than they really are.

Rescue dogs! Because I find them to be the most thankful and loving, when I get my own place one day- the first thing I'm doing is going to a shelter and adopting the oldest dog there.

The fastest route or the scenic route? 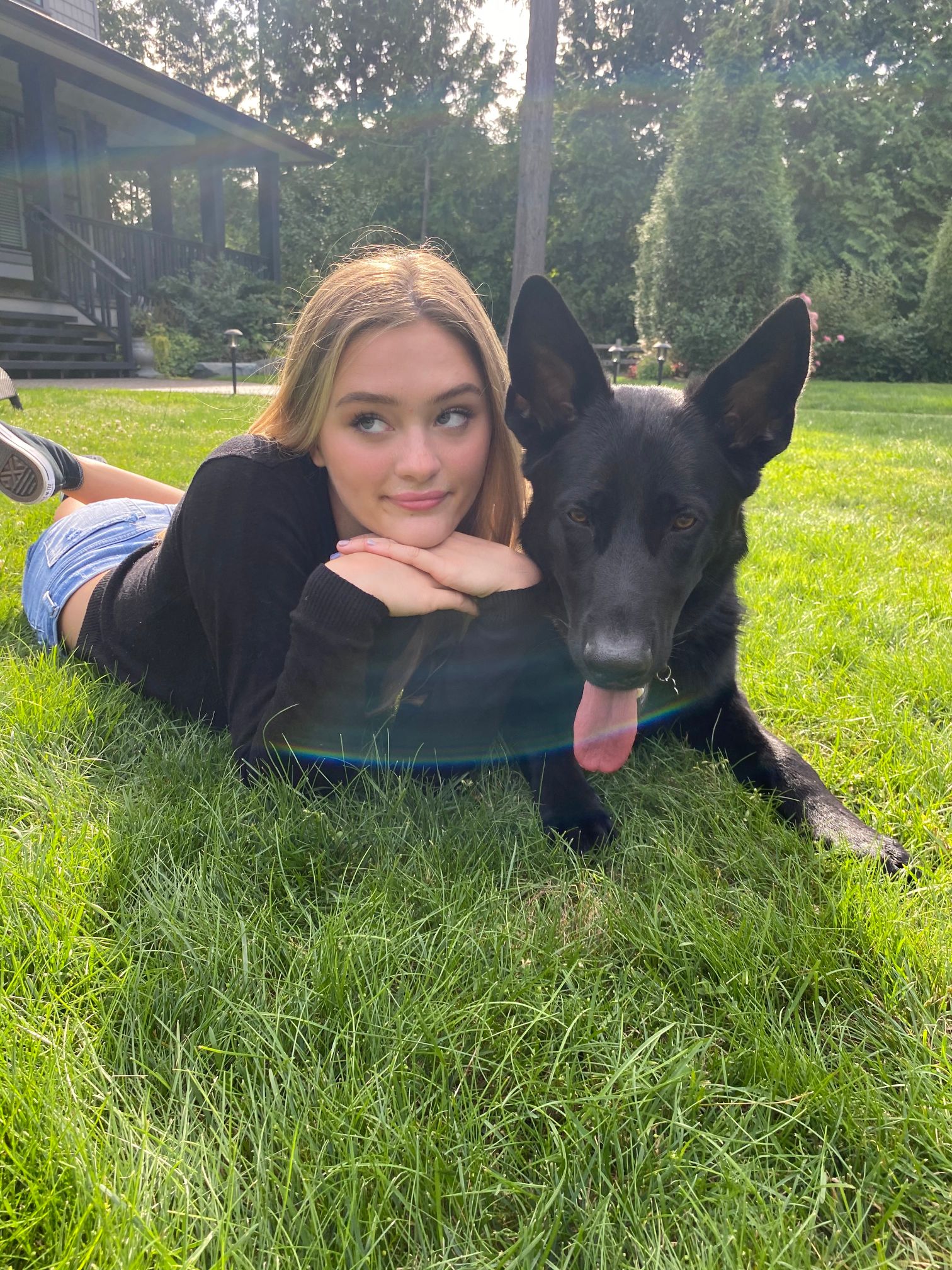 9. Describe the last time you laughed out loud because of something you saw your (or any other dog) do?

Whenever Kodak gets really excited he jumps up and spreads his front legs out like a bird and it makes me laugh every time!

Drawing and painting! They were the first hobbies I ever picked up, and I do it every day.

11. Let us in on a secret that very few people know about you?

I’m always playing characters around the house. Such as doing accents, or impersonating people. And it annoys the heck out of my family. 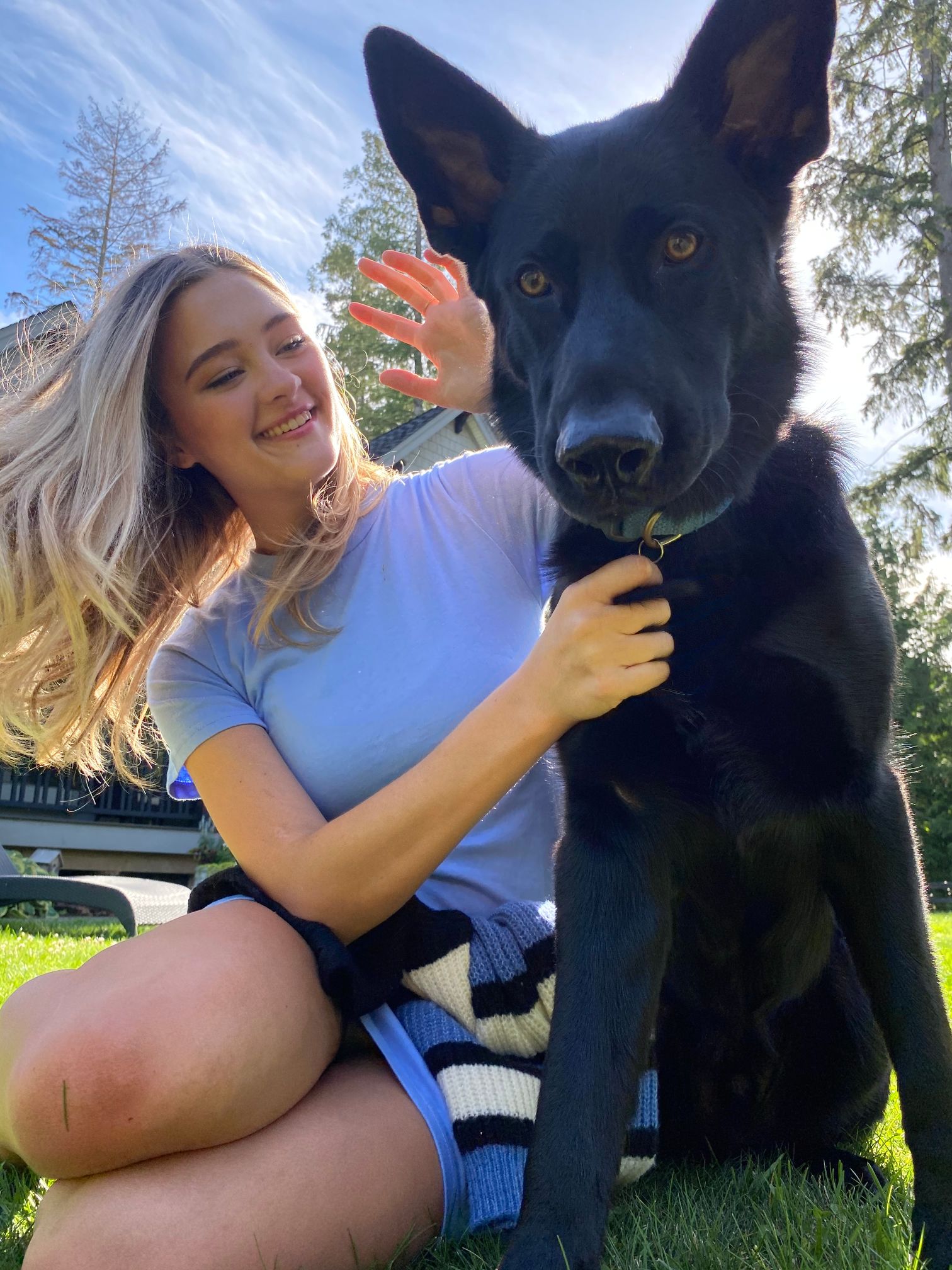 12. What is your current favourite…?

After Hours (the Weeknd)

Anything that distracts me from studying.

13. If you had to choose just one, what product would you say has most changed your life do you think (and why)? (can be technology, beauty - anything)

My new iPhone- the camera is phenomenal so it makes for great pics of Kodak. 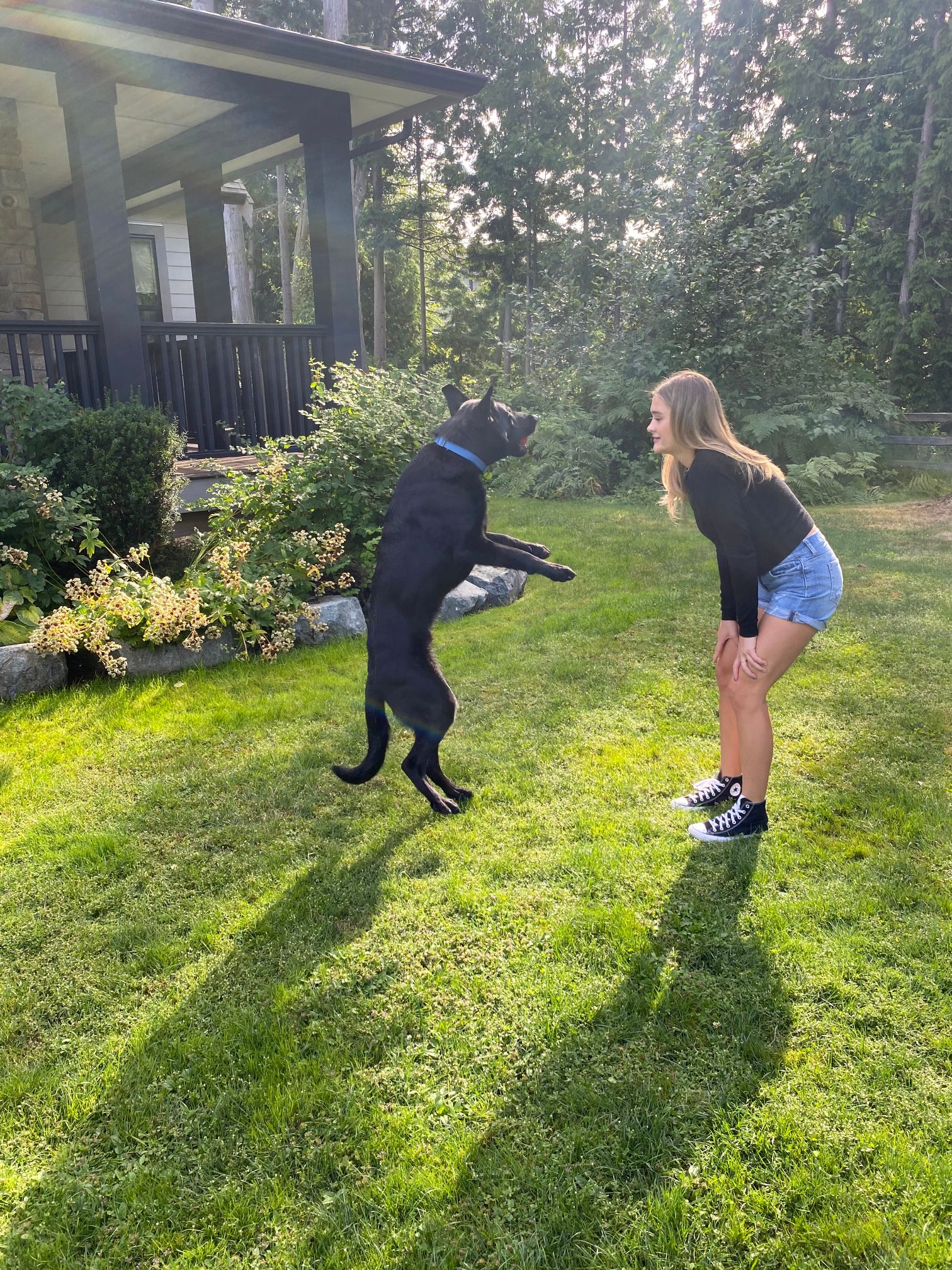 14. If you could sum it up, what do you think is the best thing about being a dog owner?

I have a permanent best friend who I know loves me no matter what. I can take him everywhere and get to watch him grow up.

Dogs are just fluffy balls of therapy - and they make everything in life better without even knowing they're doing it.

15. Finish the following sentence, my dog is…

...one of my best friends, he turns any scenario into something positive and memorable. 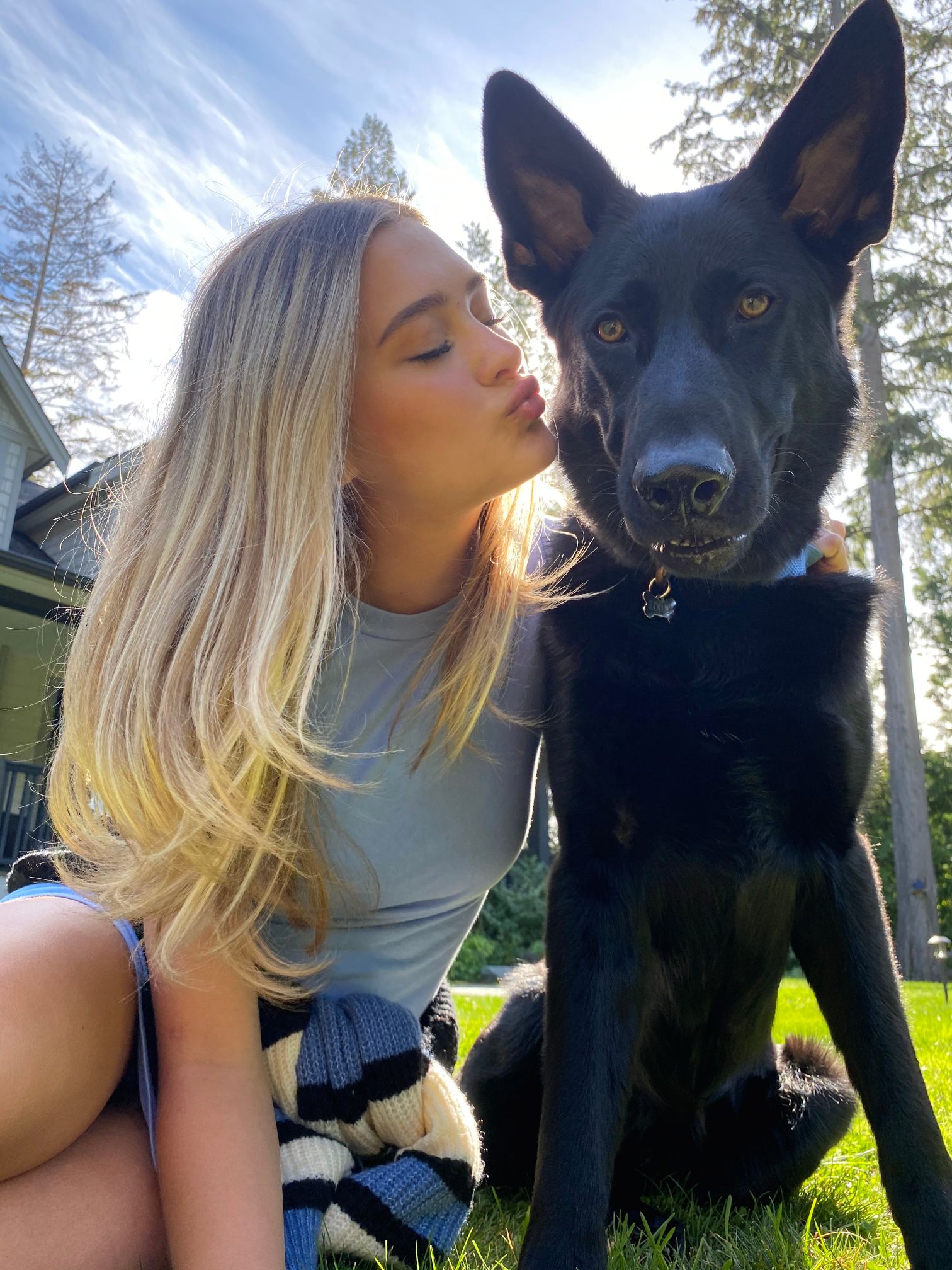 16. And finally, this is always a tough question and often requires some serious thought….If your dog had the ability to speak and you could ask him just one question and one question only, what would you ask them and what do you think that he'd say?

I would ask him......."Why are you always talking?" And I think he would answer..."Because I know it gets your attention, can we play ball now?"

ABC’s ensemble drama “A Million Little Things,” from writer DJ Nash, is an hour long drama with comedy elements about a group of friends who, for different reasons and in different ways, all are stuck in their lives.

When one of them dies unexpectedly, it’s just the wake-up call the others need to finally start living. “A Million Little Things” season 3 will return to ABC this Autumn.