Joanna Forest is a classical soprano whose debut album 'Stars Are Rising' went straight to number 1 in the Official Classical Album Charts. What makes the accolade even more special is that she's the first independent artist to reach the top spot with a debut album.

We caught up with the singer at home to hear more about life, music and her beloved dog, Eevee. 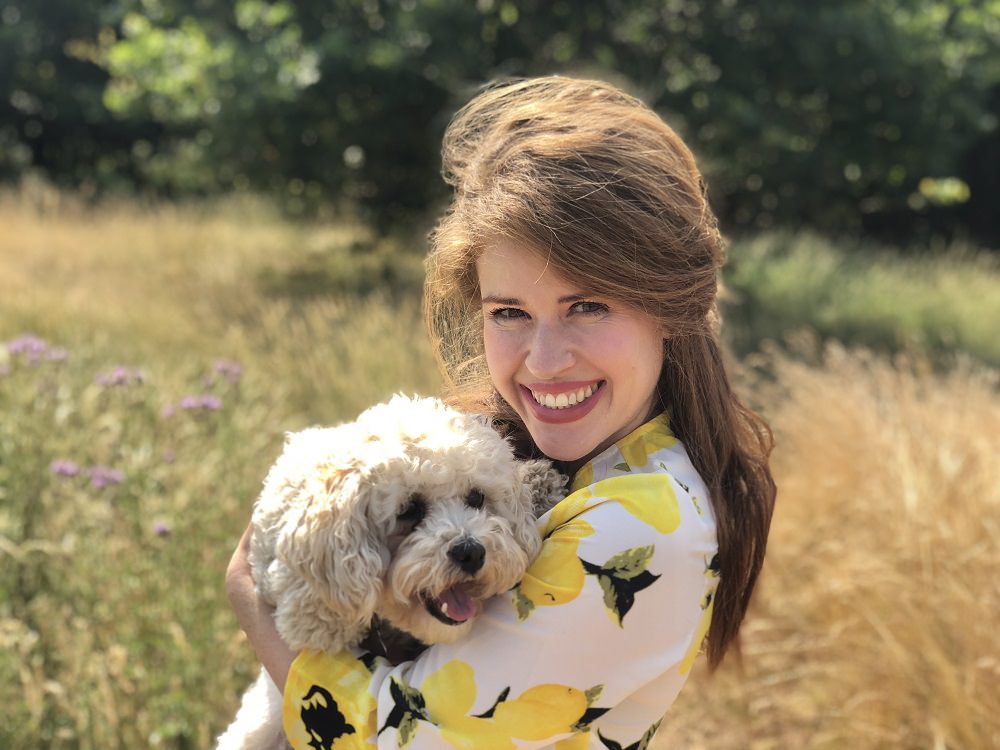 Hi Joanna, thanks for your time! First things first, we’ve seen Eevee on your Instagram - please tell us about her.

Hi! We have had Eevee for a year now. My husband James and I live right in the middle of Epping Forest and love going on long walks exploring. We always used to see so many dogs going on walks and would think to ourselves how lovely it would be to share the forest with a dog of our own.

We were lucky enough to find a lovely family who’s gorgeous Cavachon, Cookie, who had a litter of the cutest little Cavapoochons. We were so excited to bring Eevee home and look after her.

She has such a wonderful personality and is so full of love and fun, she just wants to be everyone’s friend.

(Laughs) She can also be a bit of an excitable handful, but she has calmed down a lot in the year we have had her. 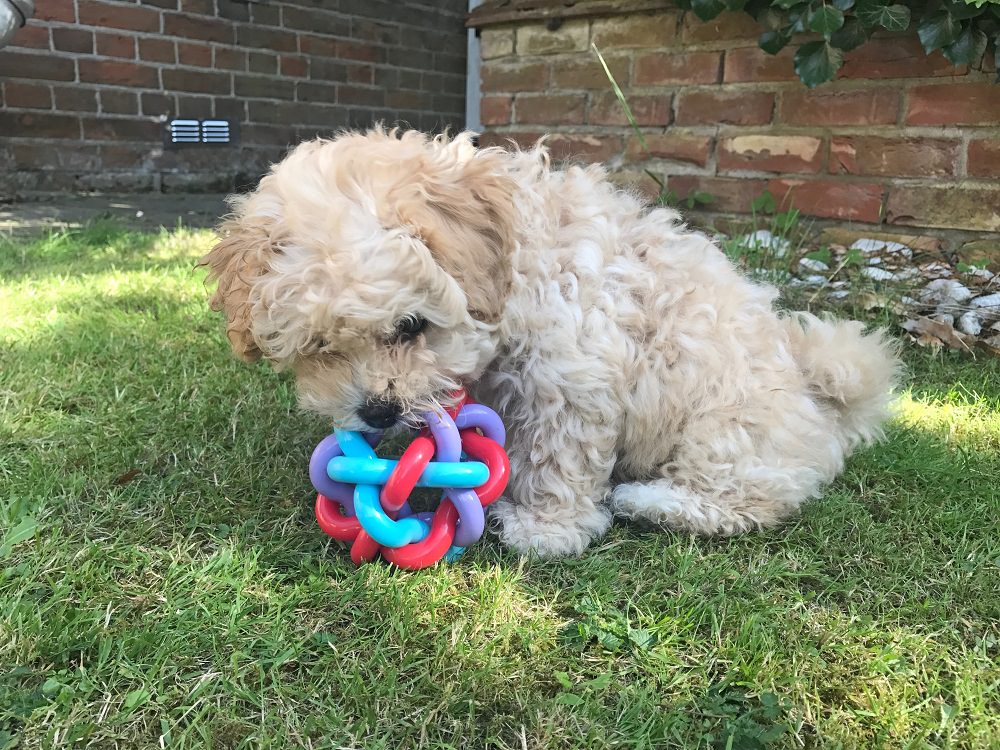 You are allergic to dog hair, aren’t you?

Yes, I’m allergic to both dog and cat hair so that’s why her being hypoallergenic is ideal because she’s part Cavalier, part Poodle and part Bichon Frise.

We couldn’t have Eevee if she wasn’t hypoallergenic because of my job, I would find it hard to live with a dog that sheds lots of hair, it would make such a difference to my voice. 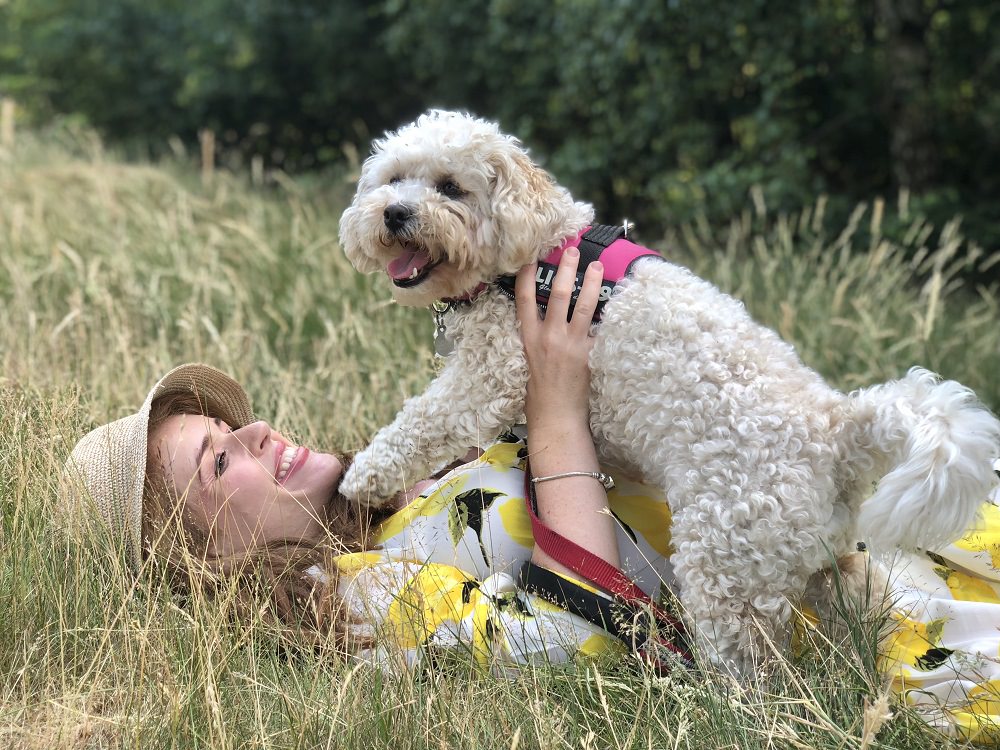 With that in mind, I'm guessing Eevee is your first dog?

Yes, she’s both mine and my husband, James’s first dog.

We both grew up without any animals around so we’ve had lots to learn and find out, it’s been a very big learning curve, but fun at the same time.

James, however, has got twin boys, Robin and George, so the interrupted sleep and early starts were something luckily he was already used to. 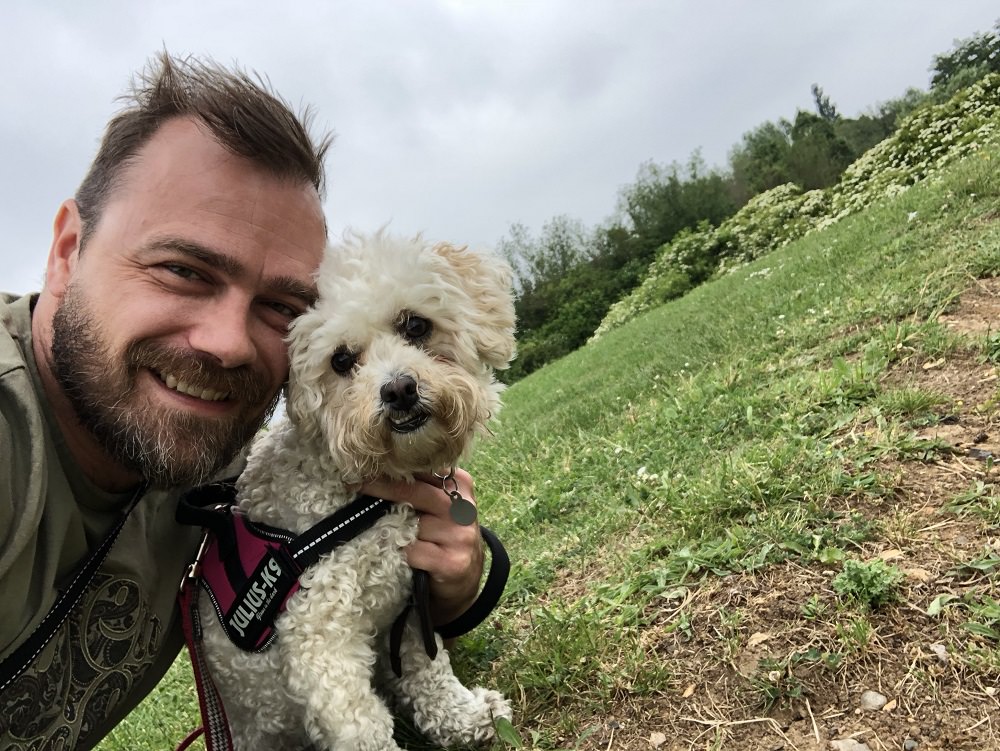 How do they all get on?

Robin and George are brilliant with her and love playing and cuddling with Eevee. 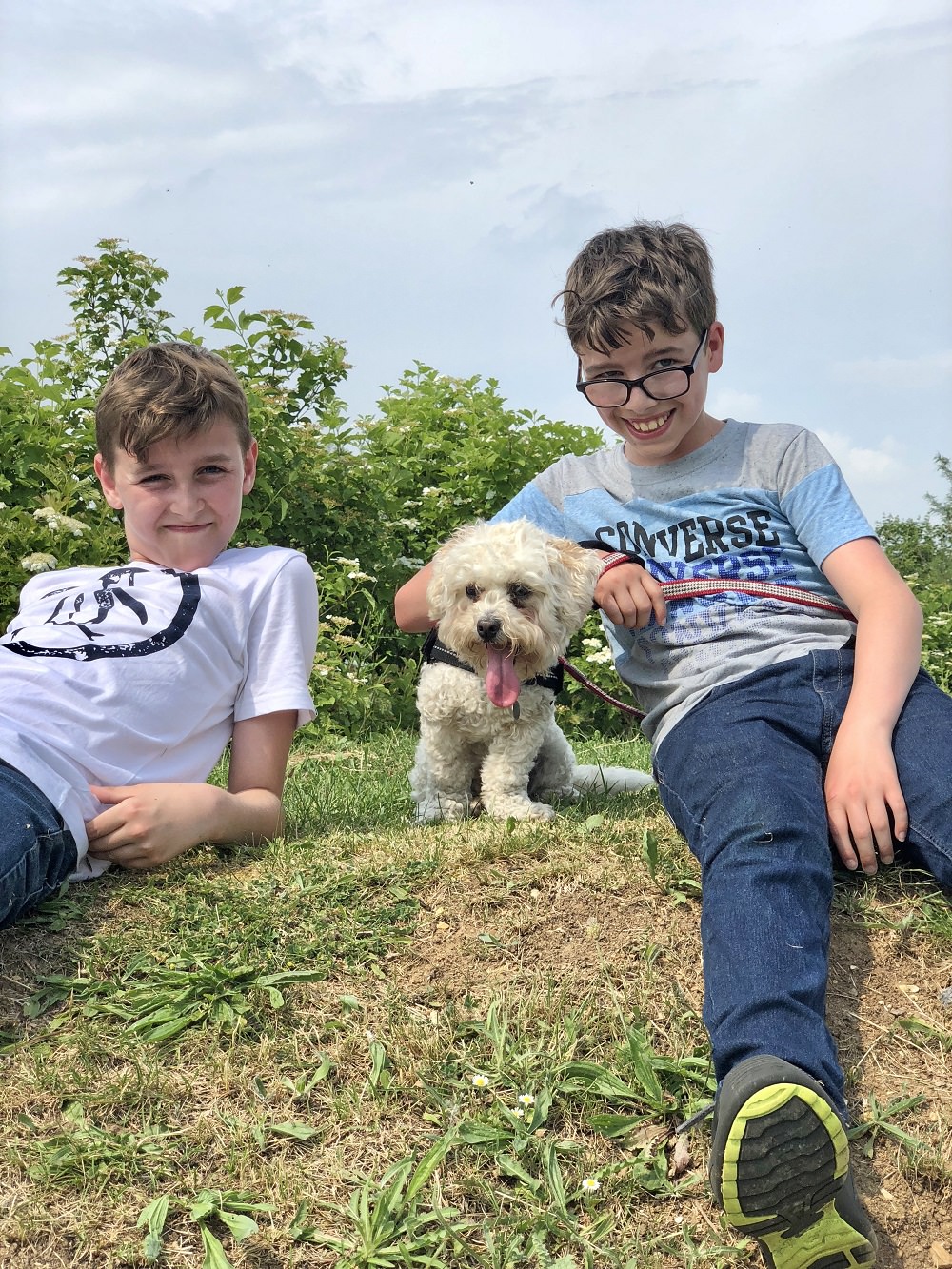 We all know how life changes when you get a dog. Has your songwriting process changed or has she influenced anything you’re working on now?

(Laughs) Funnily enough, Eevee isn’t the biggest fan of my singing and often takes herself into another room if I am rehearsing! She has been known to try and join in on occasion of family renditions of Happy Birthday though!

Music is obviously a massive part of your life. Which do you prefer: vinyl or digital?

I've got a big collection of vinyl from years ago which I have still held on to. I am also quite old fashioned in that I still like to own a CD sometimes. I like looking at the inlay card and seeing the extra photos and things.

However, having your whole music library on your phone is so handy. I have a subscription to Apple Music and it makes you feel like you have every song ever written ready to listen to at your fingertips.

Your debut album 'Stars Are Rising' went to number 1 in the classical chart, a huge congratulations. What a great accomplishment!

It was so exciting topping the Official Classical Charts. I actually made chart history by becoming the first independent artist to reach the top spot with a debut album. It was the most fantastic feeling. A total dream come true. I am so proud of 'Stars Are Rising' and so happy that people are enjoyed listening to it as much as I enjoyed making it.

I was honoured later on in the same year to be asked to sing on the 'Royal Platinum Love Song', which was written to commemorate the 70th wedding anniversary of The Queen and Prince Philip, this also shot to the top of the Classical iTunes Singles charts.

I have had some brilliant experiences since the number one. I headlined two huge summer proms and also took my own first solo show out on tour.

I was on the same bill as Paloma Faith and Kylie singing at The Marks and Spencers Charity Ball. I also performed on the BBC show 'Songs of Praise'.

Wow, you’ve been kept busy then! What’s happened for you since we last caught up?

My second album 'The Rhythm of Life' has been released. It is my concept album 'a day in the life of a child' represented by music and it's for the whole family to enjoy and I wanted it to bring classical music to younger ears.

I have two wonderful duet partners on the album. CBeebies presenter Andy and BGT winner Paul Potts. It has all the much-loved family favourites on the album it and I recorded with the wonderful Arts Symphonic Orchestra produced by Robert Emery.

Inspired by the crisis that music education has found itself in, before the pandemic I was going into schools and performing my interactive Rhythm of Life workshop.

I have collaborated with the wonderful illustrator Gary Andrews who has created an animated video for 'Lets Go Fly a Kite' and also for Hushabye Mountain released as a virtual hug for everyone as we come to the end of 2020,

2020 might have seen a huge change in that no live performances are allowed, but this year I have topped the classical charts with a collaboration with composer Olga Thomas with a beautiful song 'Flowers on The Doorstep'

I also topped the classical charts again with a very special musical tribute to East Grinsteads head rugby coach, Sgt Matt Ratana, who was killed in the line of duty in September this year. with a new version of 'World in Union' created by Joel Goodman. The song also reached 24 in the main iTunes chart. 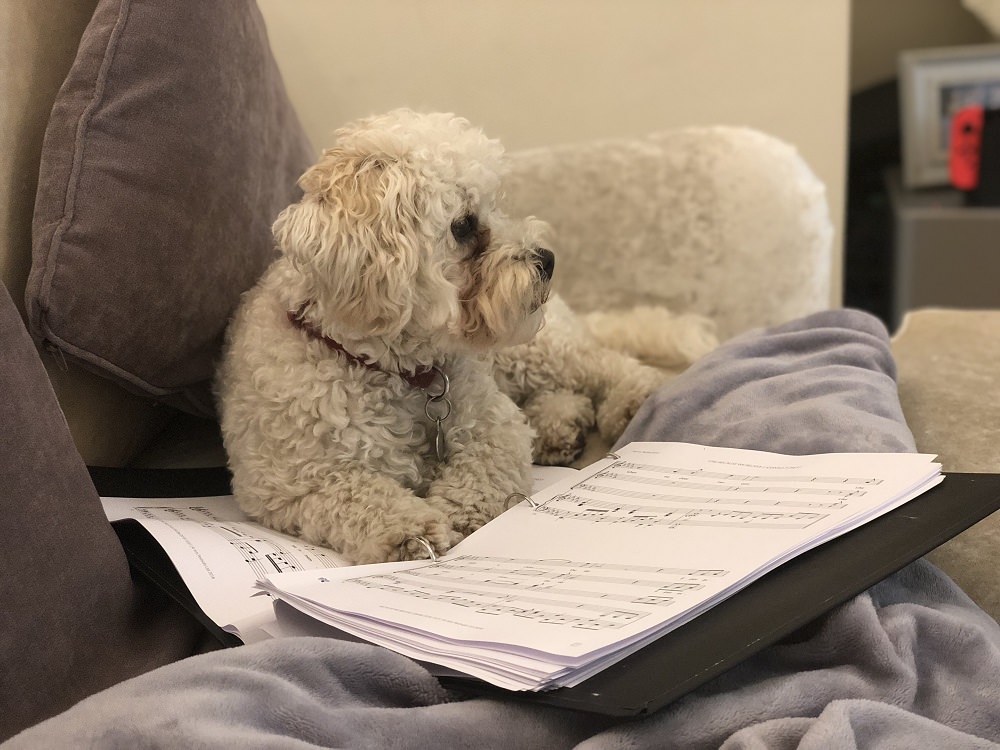 Music can evoke so many memories. If you had to pick three songs that mean something special to you, what would they be?

They are all from my favourite day, my wedding day! We had such a fabulous ceremony, our wonderful friend Leila married us and we had lovely friends sing for us which made it really special.

I walked down the aisle to our friend David singing The Beatles’ ‘Something’ and after we exchanged rings our friend Ako sang ‘Ring Of Fire’ by Johnny Cash. James’s cousin Oliver played his guitar and sang ‘This Guy’s In Love With You’ by Herb Alpert, and Paul McCartney and Wings' song 'Maybe I’m Amazed’ was our first dance.

All of these remind me of our special day.

If Eevee was a musician, who would she be and why?

I think she would have to be Kylie because she is petite, blonde and totally gorgeous and she because of her breed, she will stay looking forever young. 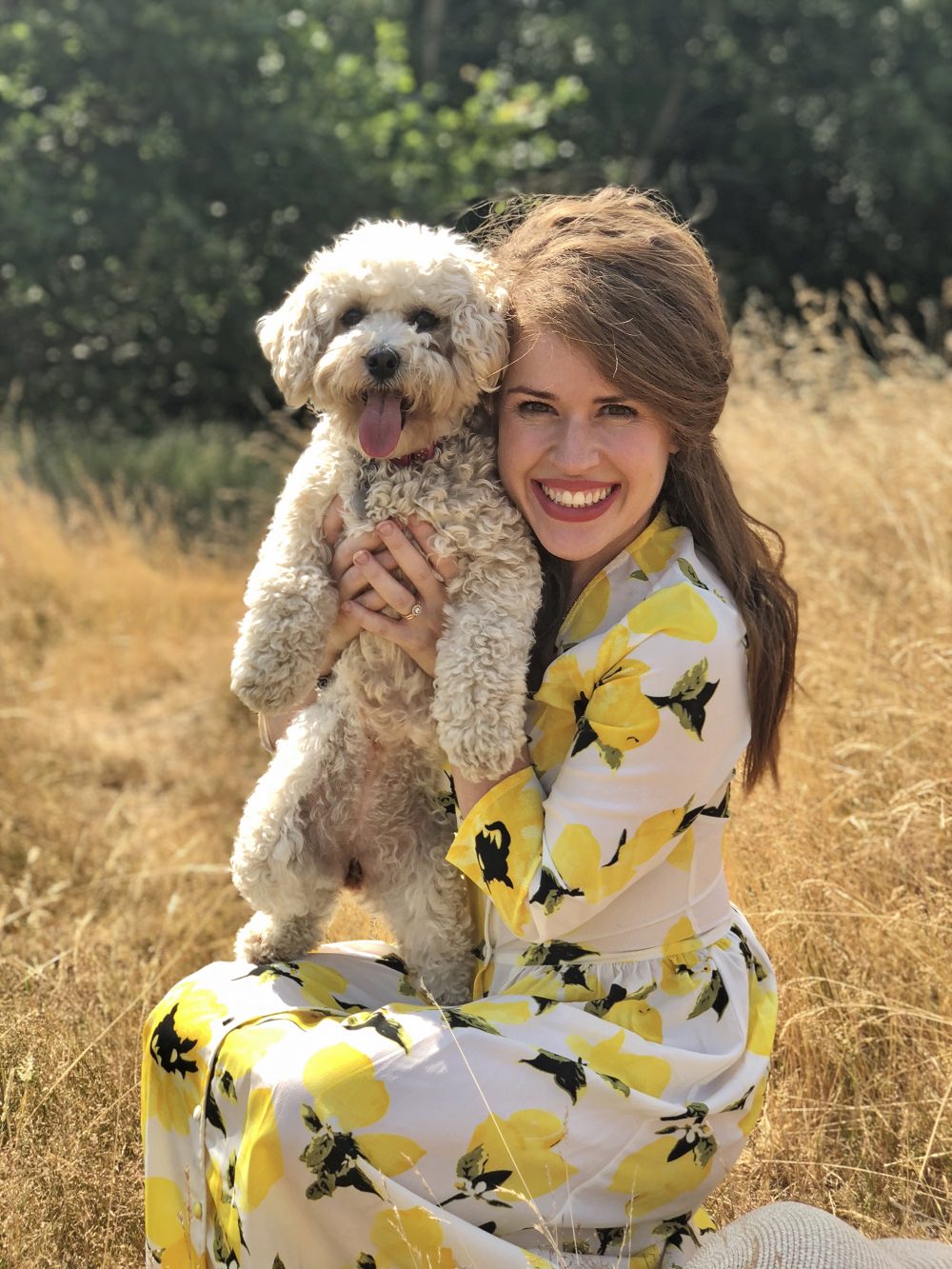 Tell us one thing that people would be surprised to learn about you.

I am a Boobette volunteer for the awesome charity Coppafeel!

They are an amazing Breast Cancer awareness charity who do amazing lifesaving work by spreading the vital message of checking yourself far and wide wherever there are young people.

How did you get involved?

A Boobette has either had Breast Cancer (in my case I was 21) or maybe has had a scare, or someone very close to them may have had it, we share our stories to encourage Breast Awareness. 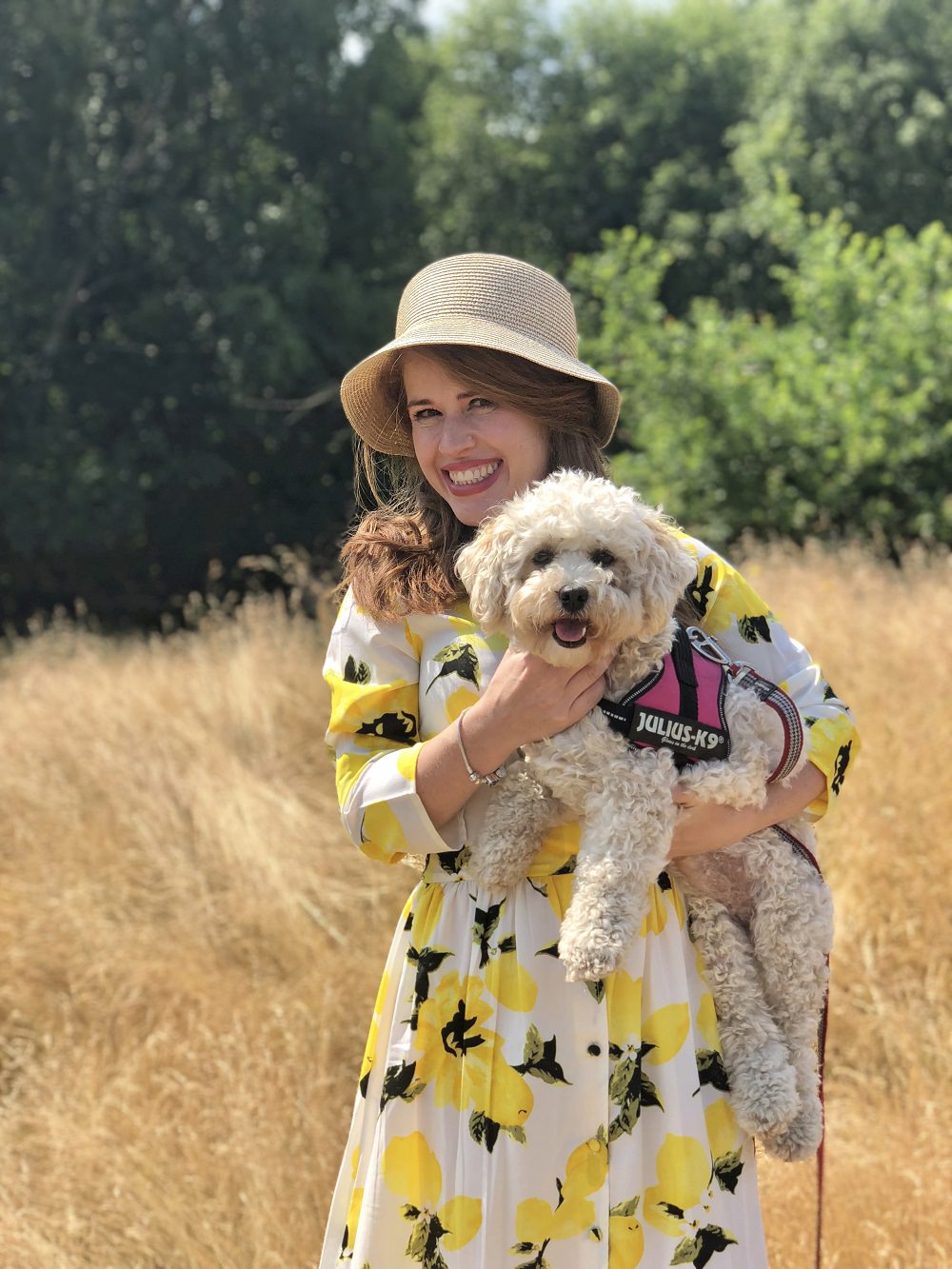 What do you think is the best thing about being mum to Eevee?

Eevee makes me smile every day, she is the most brilliant companion.

I love coming into her in the morning and seeing how happy she is to see me and James. When we come home it’s the best thing to have her excited welcome. She loves going on long walks having cuddles and playing - she really is the best fun.

Finish the following sentence: my dog is...named after a character in Pokemon, I think she deserves her own video game! 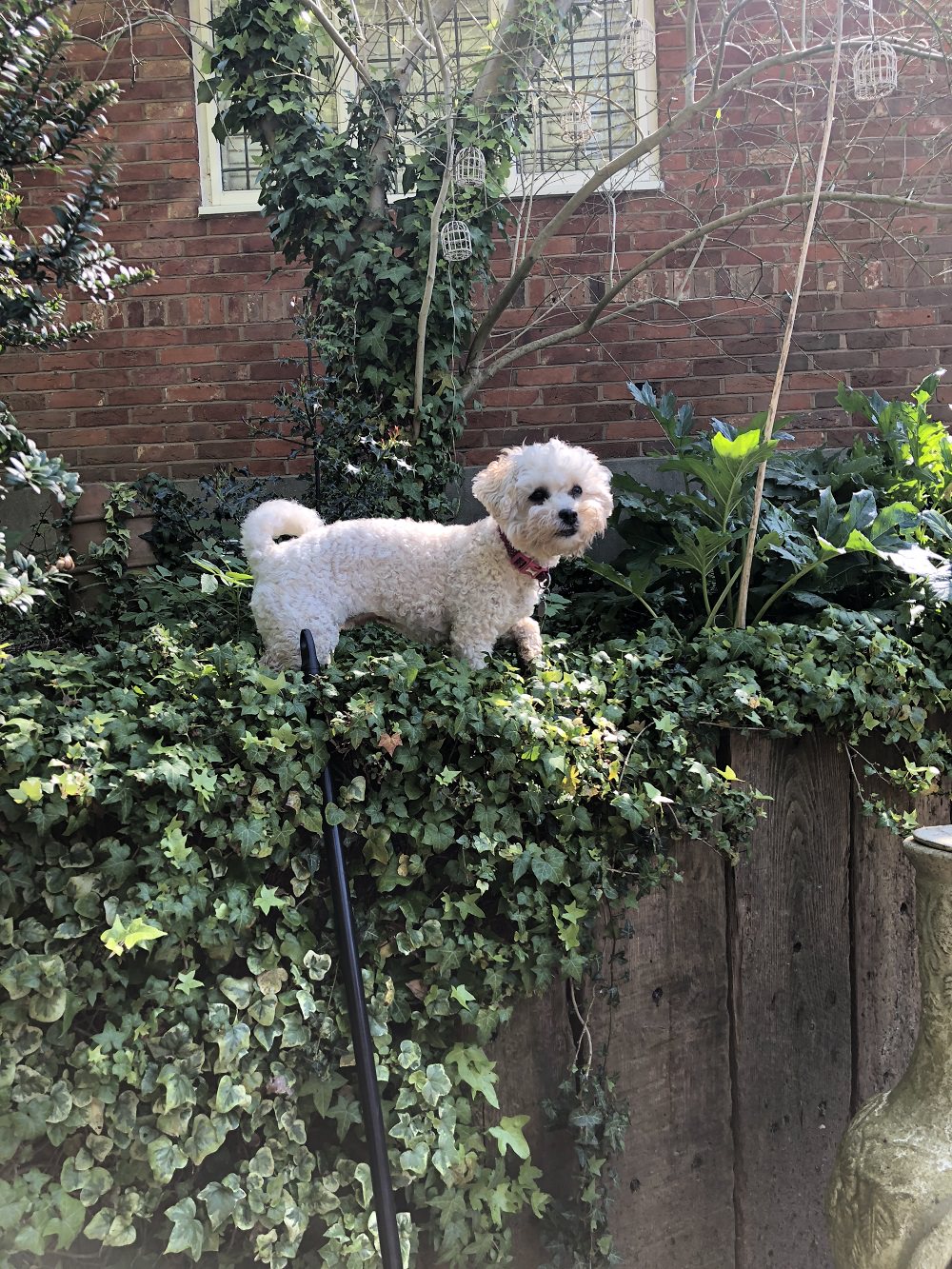 And finally, if you could ask Eevee one question and one question only, what would you ask her and what do you think she would say?

I would ask her ‘Why do you run away from me when I want to put your lead on you when you actually love going out on a walk?’.

And I think her reply would be 'The running away game while you try to catch me is the best game ever - plus its hilarious watching you trying to catch me when I am so super quick'.

Thanks so much, Joanna!