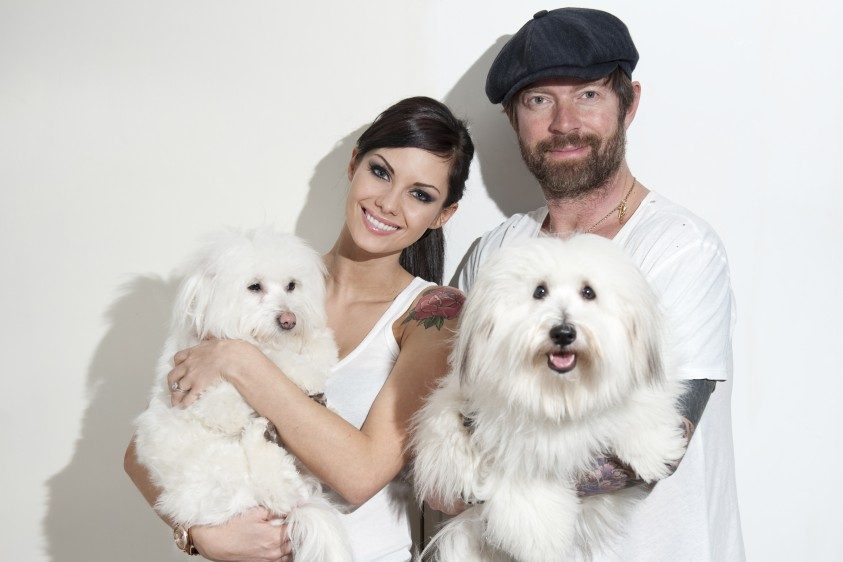 Jessica-Jane Clement is well-known for her role as the ‘sexy swindler’ in The Real Hustle on BBC3, where for the past 7 years she has carried out a variety of pseudo-scams showing viewers how the general public can be scammed and hustled. Most recently readers will have seen Jessica-Jane take on a new challenge entering 'I’m A Celebrity Get Me Out of Here' where she became a firm favourite in the camp and with the viewers at home.

K9 Magazine caught up with Jessica-Jane to talk about two of the big loves in her life (the third being her fiancé Lee Stafford), her beloved dogs, Knickers and Pants.

I have two Coton de Tulear dogs called Knickers and Pants. Knickers is a girl and she's just over 1 year and 4 months old. Pants is a boy and he's 1 year old.

They're very close in age and are from the same breeder in Doncaster so they have the same dad, but a different mum. Lee lovingly calls them council estate dogs. When we decided to get a dog we didn't know where to start to be honest.

We had no idea at the time about what breeds might fit in best, I'd grown up with cats and although my mum has a Chihuahua now, we knew we wanted a different breed.

So we started researching online and found a website which gave marks out of 10 for everything from exercise, to size, to grooming – everything you needed to know really. We narrowed it down to 7 possible breeds so we printed all of the details off and we read through everything.

We eventually decided on Cotons because they're brilliant around people and children, they don't shed and they don't need a huge amount of exercise which was something we had to consider because we live in a flat in Soho.

Once we'd decided on Cotons we started researching possible breeders and that's how we found Knickers and Pants breeder. We didn't have Knickers that long before we decided to get her a playmate, although we always made sure our schedules meant she was rarely left on her own and she came to work with me fairly regularly. In fact, I'm sure she's got me work as she breaks the ice when she comes along to meetings . She loves to play and she'd be playing with her ball on her own in the flat and we thought wouldn't it be nice for her to have a playmate and so that's when we got Pants.

They have unusual names. How did you choose them?

That's a funny story. We were at a friends house one day and she has lots of dogs and fields with horses. We were outside one day and her daughter kept shouting 'Pants' so I asked my friend why she was shouting pants and she told me that it was the name of one of her dogs. Lee and I thought it was brilliant and we said when we got a dog we'd call our dog Pants but then we thought that's not really a girls name so we went with Knickers being more girly, then when we got our little boy we called him Pants – we call them our full lingerie set!

Well I grew up around cats, we had two called Suzy and Sally, in fact we still have cats at home now. Our cats were always really independent and liked going out and where we live in Soho it's not really an option. I did read about indoor cats but in all honesty I thought if I were a cat I'd want to be able to go outside and explore.

I've always loved dogs so although I'd always been around cats, I wanted a pet I could train and look after. To be honest, I was getting broody at the time aswell and I tend to work from home quite a lot and I wanted a companion.

Whenever we're away from them I worry that they're okay and happy so I think now though if the love I feel for Knickers and Pants is 1% of what it feels like to have a child, I'd worry all the time.

They bring so much to my life, just the fun and love they give. I never used to sleep when Lee was away with work but Knickers and Pants will just lie on the bed and I fee more relaxed knowing they're there for me – although they bark at anything and everything like the washing machine if it's just finished a cycle.

That said they're such friendly dogs if anyone did ever break in they'd probably just lick their feet.

You've had a really varied career to date, from presenting on The Real Hustle, to your modelling work, to acting on shows such as Dream Team and appearing in music videos. What do you love most about the variety?

I really liked the routine with Dream Team. I was sort of the head WAG on the show so I'd always be very done up. Working with the same people you really built a connection and could have some great conversations and banter between everyone. I owe a lot to the show really. It was my drama school really because I enrolled in one but ended up not going because I got both the Dream Team job and The Real Hustle job at the same time.

I never got to study acting, my learning came on screen really and there's pros and cons to that I suppose. Looking back I noticed I had a really bad habit when I was starting out of shaking my head, even if I was saying yes, I'd still be shaking my head and I think why did no one tell me!

Acting is amazing because you get to be someone else and I've got a few things lined up for this year which I'm really excited about.

Modelling is great because you get to look good and of course there's the airbrushing but I know I won't to do that all of my life.

Finish the following sentence, my dogs are... little clown dogs!

And finally, this is always a tough question and often requires a fair degree of thinking time but….If Knickers and Pants had the ability to speak and answer one question and one question only, what would you ask them and what do you think that they would say?

I think I'd ask Knickers 'are you happy having shorter hair than Pants?'. We have to keep her groomed shorter because her hair knots up so much more than Pants so she has a lovely pink diamante collar to make her look more girly. And I think she'd say that she likes it because she looks like a puppy but would like it a little longer if possible.

Ditsy Pet – for their Dog Bandana and Lead Sets

Notforpussys.com – for their Go Walk Coats

Wuff In Style – for their pet jewellery including Swarovski necklace charms

And last but not least, Tony Blake/Flat One Photography

Dogs are awesome, aren't they? And yet just when we think we've got a handle on how brilliant they are, they line up to...