Who wouldn't want to have one moment to be able to ask their dog that one question and, by magic, receive an answer? If you love poodles and would like to learn more about this beautiful breed, we recommend you to take a look this website poodleexpert.com it has a lot of information about them.

Anyone who's ever owned a dog has experienced moments where they've asked aloud; Why did you do that? Why do you like this? What's your aim here? How did you know that? Why are you scared of that?

For owners of rescue dogs with unknown history, we ponder; What's your story? Who were you before? How is your life now compared to what it was before?

Asking questions of our dogs is natural. So, naturally, we’ve asked this one, same question of every celebrity dog owner we've ever interviewed.

If dogs had the ability to speak and you could ask your dog just one question and one question only, what would you ask them and what do you think that they'd say?

Here are the questions that people want to know the answer to if their dog could talk.

Emma, who is currently an owner of a Golden Retriever named Ruby, would ask her dog, ‘What goes through her brain when she sees my suitcase because I am going away for a week or two?’

She thinks Ruby would tell her that when she sees my suitcase, she stands by the door because she wants to go with me. She worries when I don’t come home, and she expresses how much she misses me.

She added, ‘She tells me she can’t help herself from going bonkers when she finally hears my voice again because now she is the happiest dog in the world… and she can see how happy I am too!’

Hadar, who have 3 dogs, a dachshund – Lola; chocolate Labradors – Pluto and Mylo, said, ‘I would ask them if I’m doing an alright job and if they want me to change anything. I hope they’d say that they’re happy and that they love their life.’

She added, ‘I’d also tell them that if they’re in pain they should always bark and get my attention.’ 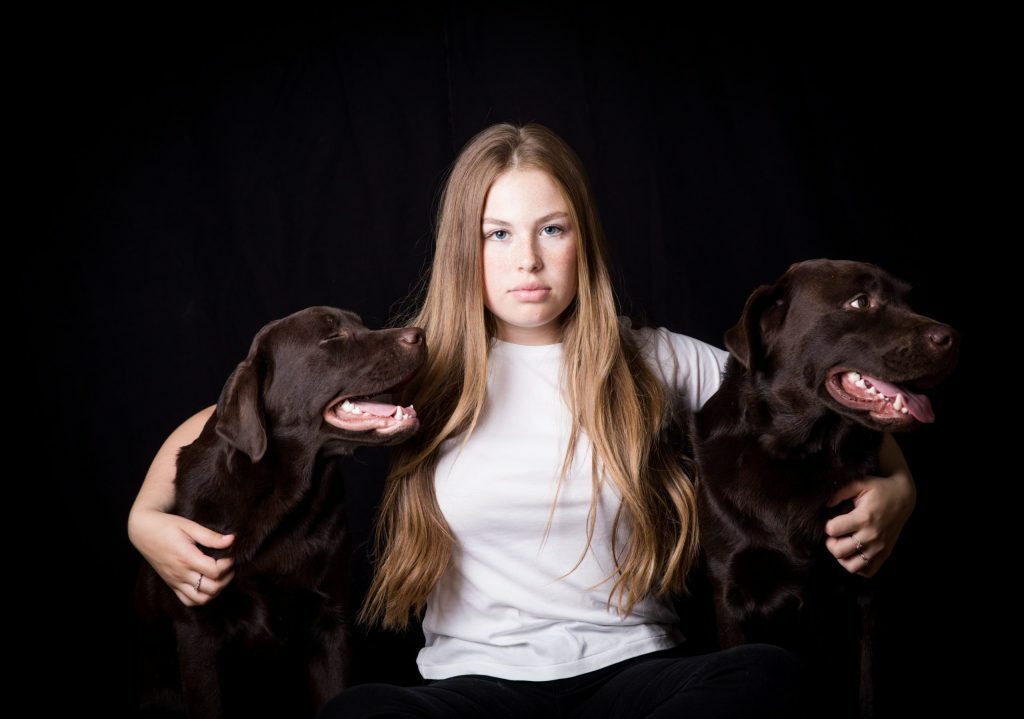 Aimee, owner of two dogs, a Bulldog called Daisy and a Pug called Eva, said, ‘I’d ask them if they’re happy but I think I already know the answer and that’s yes.’ 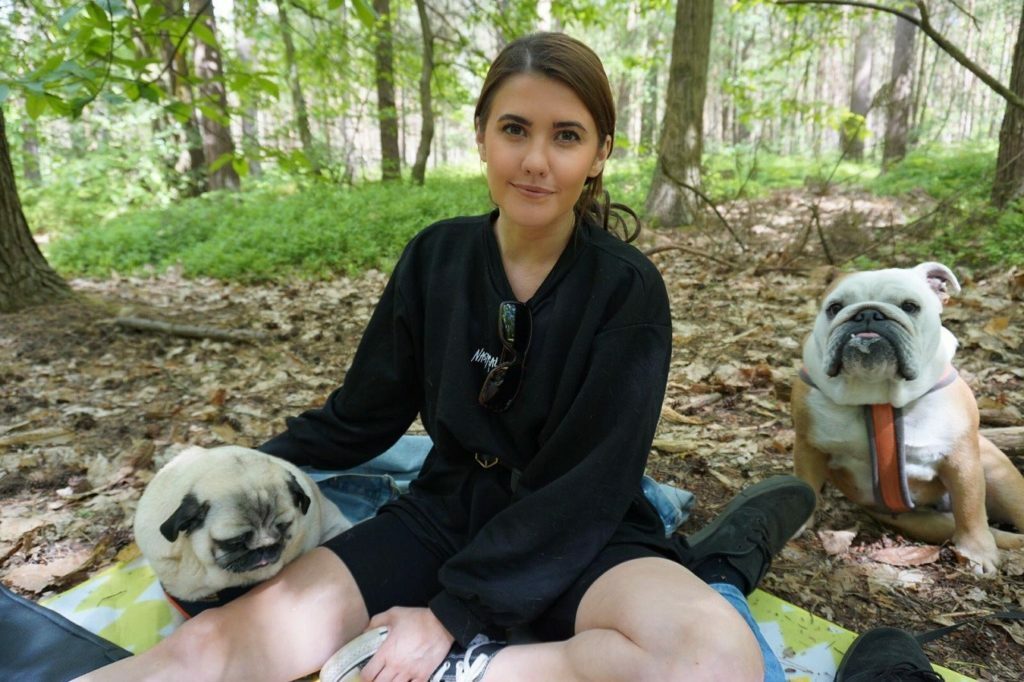 Jamie, who owns Bailey the golden, Stella the Boston Terrier/Pug mix, Smokey the American Staffordshire/Poodle/Mini Schnauzer mix and Fancy the pit bull, would love to ask them, ‘What makes them truly happy and what do I do that they really don't love.’

She also said, ‘I think they'd say playing ball and cuddling on the couch is happiest and putting them on a leash to walk and holding them back when other dogs walk by is probably what they dislike.’ 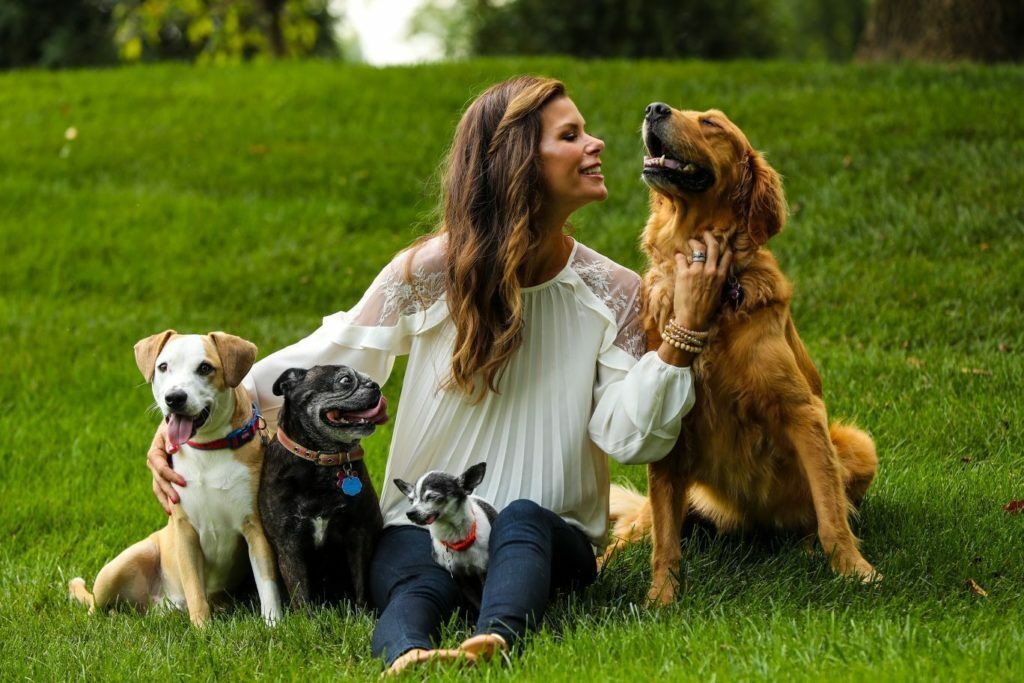 Jon, who owns Josie and Floppy, enthusiastically said, ‘I often wish they could talk because I’ve got a pretty good feeling that they’d be complementary to me. I think I’d get some good feedback.

So because I feel quite confident that my dogs would offer positive feedback on my dog parenting skills I think I’d like to ask them “Am I doing okay?” and I think they’d say, “You know what Jon, we have no complaints”. 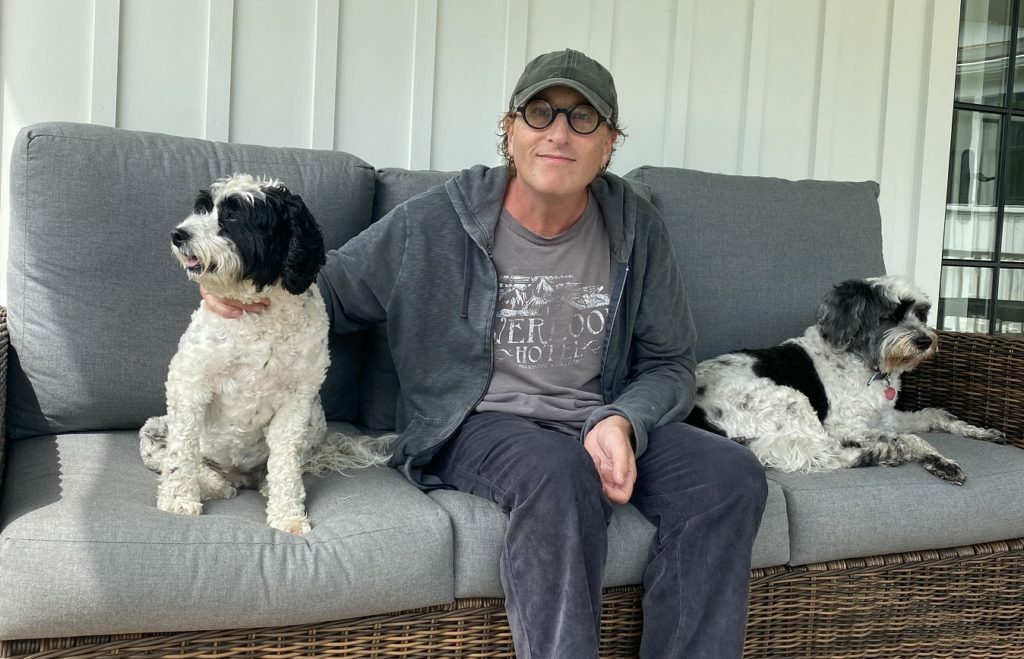 Kate who has Badger, Bella and Teg, would like to ask, ‘That's a really difficult one to spring on me at the end. I would ask them what their favourite walk is and I think they would say the beach in the Gower Peninsula.’ 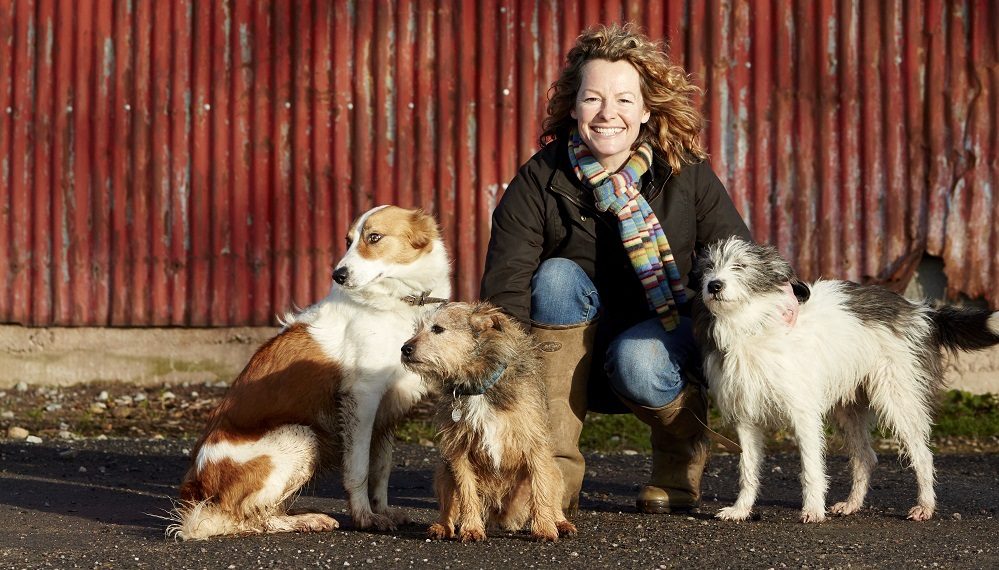 Jonna, the owner of Eevee, a part Cavalier, part Poodle and part Bichon Frise, said’ ‘I would ask her ‘Why do you run away from me when I want to put your lead on you when you actually love going out on a walk?’

She thinks her reply would be, 'The running away game while you try to catch me is the best game ever - plus its hilarious watching you trying to catch me when I am so super quick'. 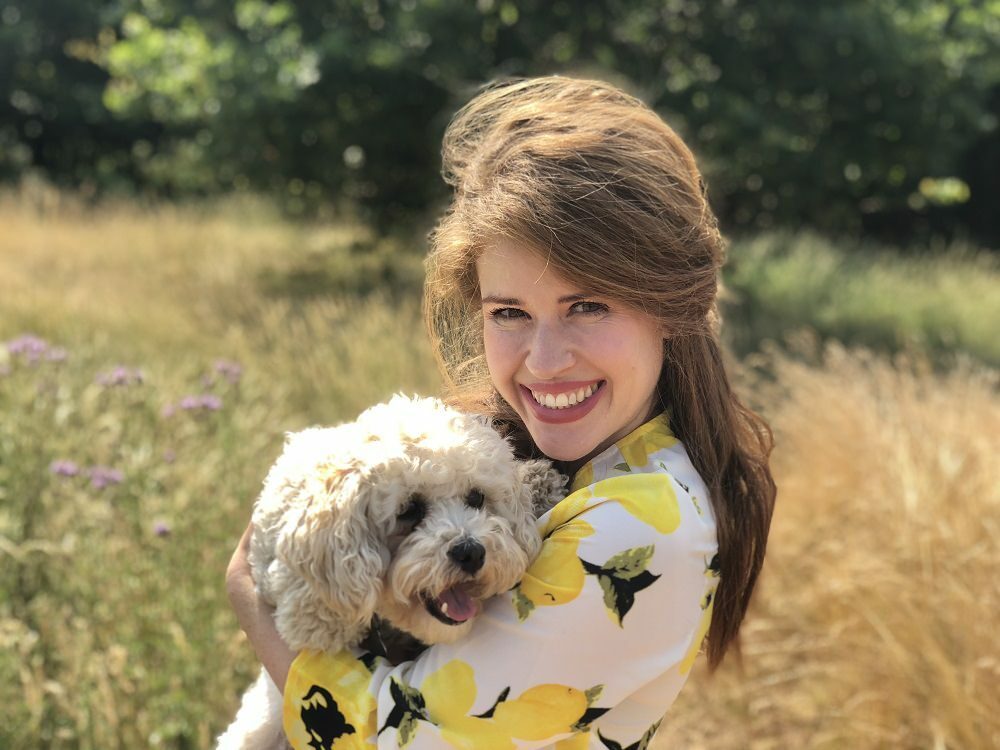 Chloe, who owns a dachshund Harley, would like to ask, “Why don’t you listen to your mummy because sometimes he’ll just carry on doing what he thinks is right and I’m not too sure what he’d say. He’d probably say ‘I didn’t realise mummy, I’m sorry’.” 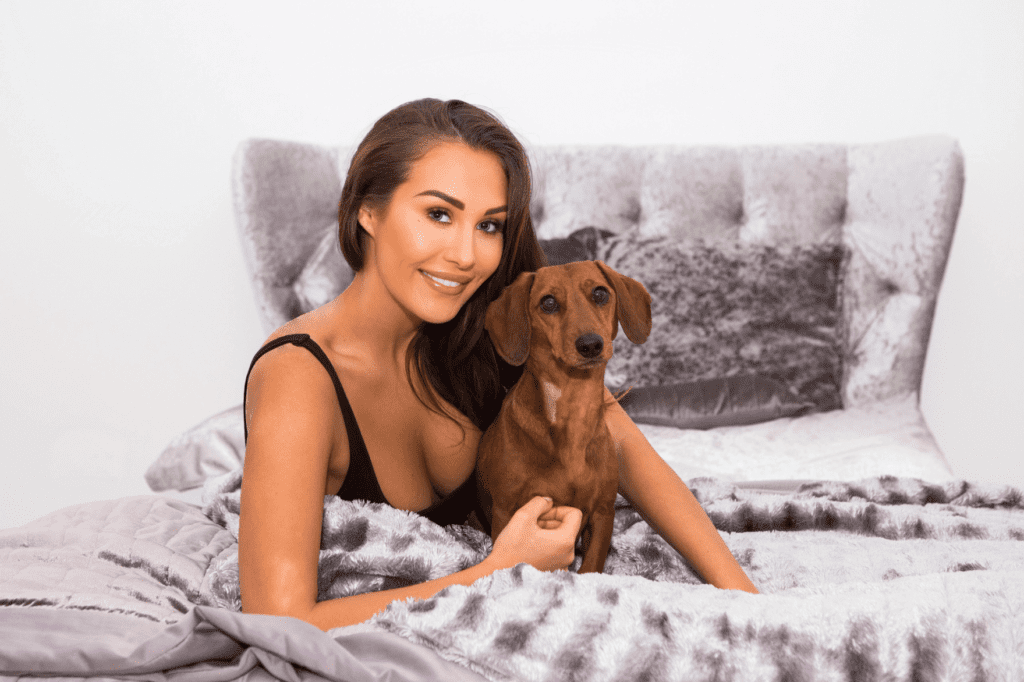 Nathan, whose life is run by his two dogs, Buddy and Buster was thinking, ‘I wouldn’t want to ask them if they love me because if they said ‘no’ I’d be gutted (laughs).’

“I think I’d ask them ‘are you happy with your home and is there anything I can do to improve it for you?’ and I think Buddy would say ‘no, it’s perfect, I love it’.”

He added, ‘Buster, on the other hand, would probably say ‘can I have more things to destroy and more things to chew, and please stop putting the child gate on because I want to chew the bannister’.

Lizzy with her Black German Shepherd, Kodak, said she’d ask, "Why are you always talking?" And I think he would answer..."Because I know it gets your attention, can we play ball now?" 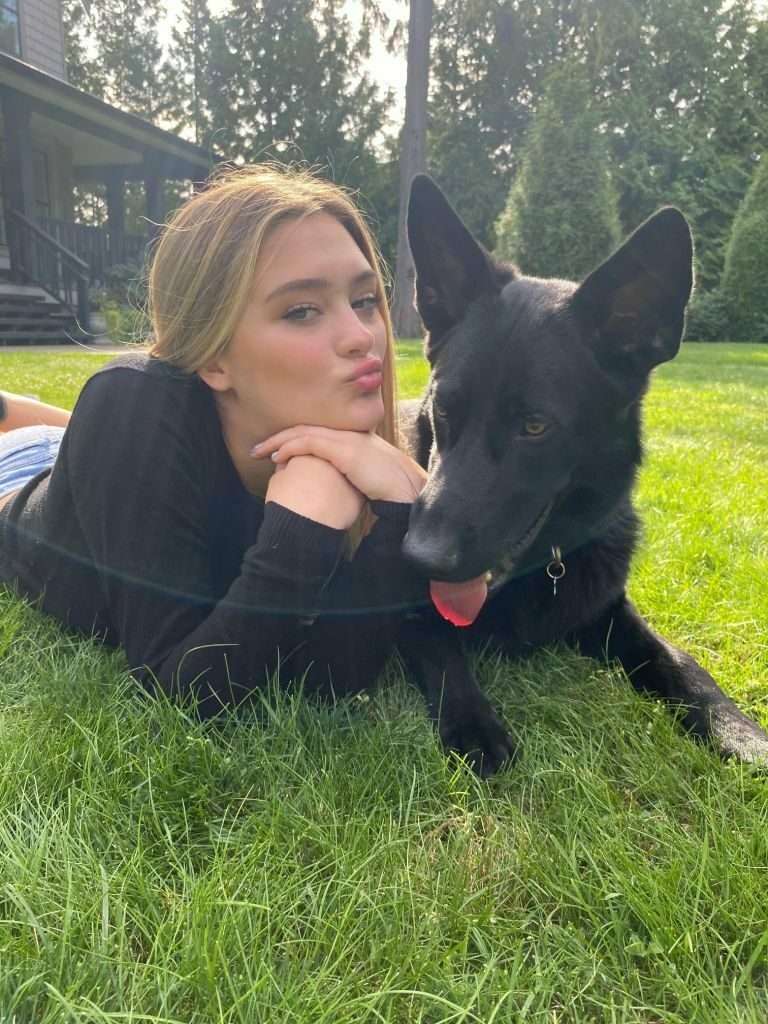 Maria who lives in Surrey with her Golden Retriever, Theo, said laughing, “I would ask him if he’s happy with his life and I’m doing a good job, giving him what he wants. And I think he would say yes.” 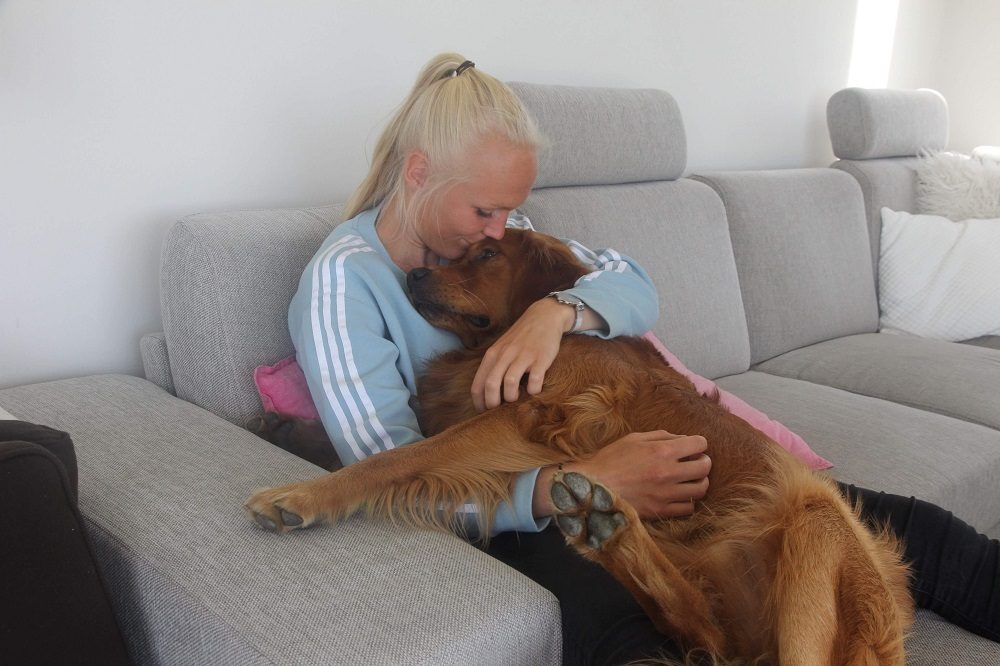 Mollee, who owns Shiloh who they think she is a Shiba Inu/Terrier mix and Stewie a Pitbull/Shar Pei mix, said, ‘I would ask them “Do you understand me when I vent to you?”

Leilani who have 2 boys - Milo and D.o.g. would like to ask them, ‘What I could do to make their life better.’

And I think Milo would say ‘Feed me more food’ (laughs) and I think D.o.g. would say ‘Just let me tear Milo’s toys up’ because Milo has soft toys because he’s very gentle but D.o.g. can only have tough toys or bones because he destroys everything else. 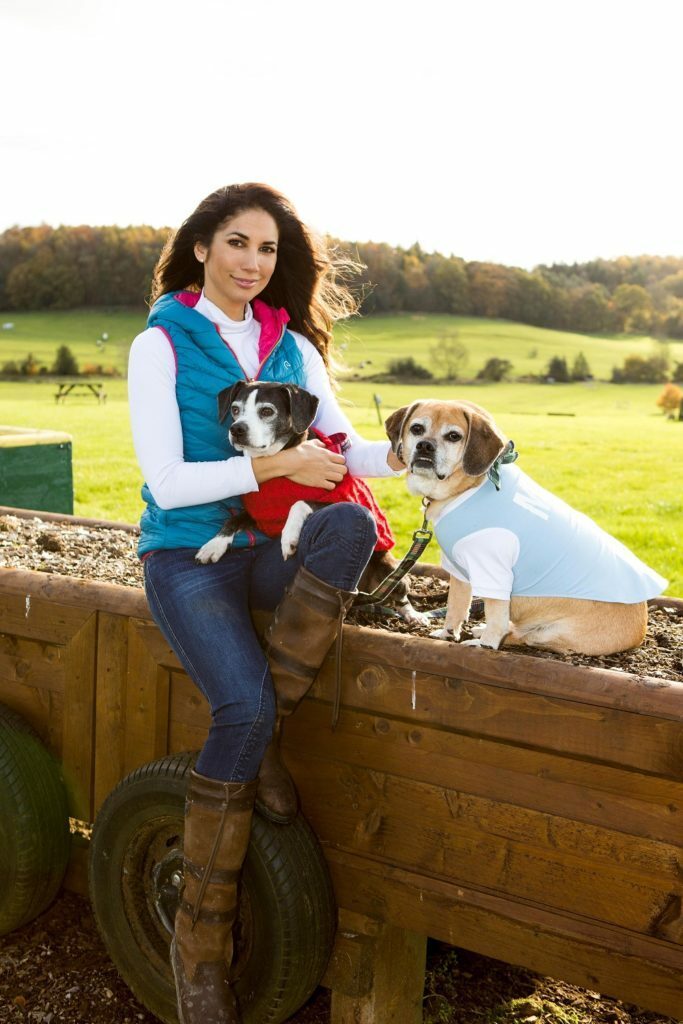 Kate, who adopted a beautiful, sassy Mexican street dog, Zelda, said, ‘I want to know about Zelda’s life in Mexico, so I’d ask her if she ever had a family, or someone she loved, when she lived there.

“I feel like she’d tell me that she once had a family, but they couldn’t take care of her and put her out on the streets. She wonders what she did wrong. But I don’t think she’s ever known what it means to be protected and loved the way that we love her. I think she’d also say that no matter what, we are her family now and she’s very happy to be with us.”

She also added, “She’d also get the last word in for sure, and tell us that she really hates the canned Venison and Sweet Potato food that we bought, so to please stop trying to hide it in with her food.”

Adam and Katy who are best known for their work on TV and owns two rescue dogs, Rufus an Australian Cattle Dog and Tallulah, a Bulldog, shared us their thoughts on what they would ask their dogs.

Adam: I’d ask Rufus if he can do the Russian dance, you know the one where you scratch their bum and they dance, I’d love him to do it every morning when I wake up. It’s literally the best way to start the day, it always makes me laugh.

Katy: I would ask Tallulah if she loves cuddles from us more than anyone else and I’d hope she’d say “of course”, rather than “I love cuddles from everyone!”.

If I could ask Rufus a question too I’d ask him “what are you barking at and how do I stop it?”. I’d hope he’d say “I’m sorry mummy, I genuinely thought you liked it.”

Katy: Or the postman. When we moved here our neighbours told us he barked every day at 9.30am when the postman delivered. 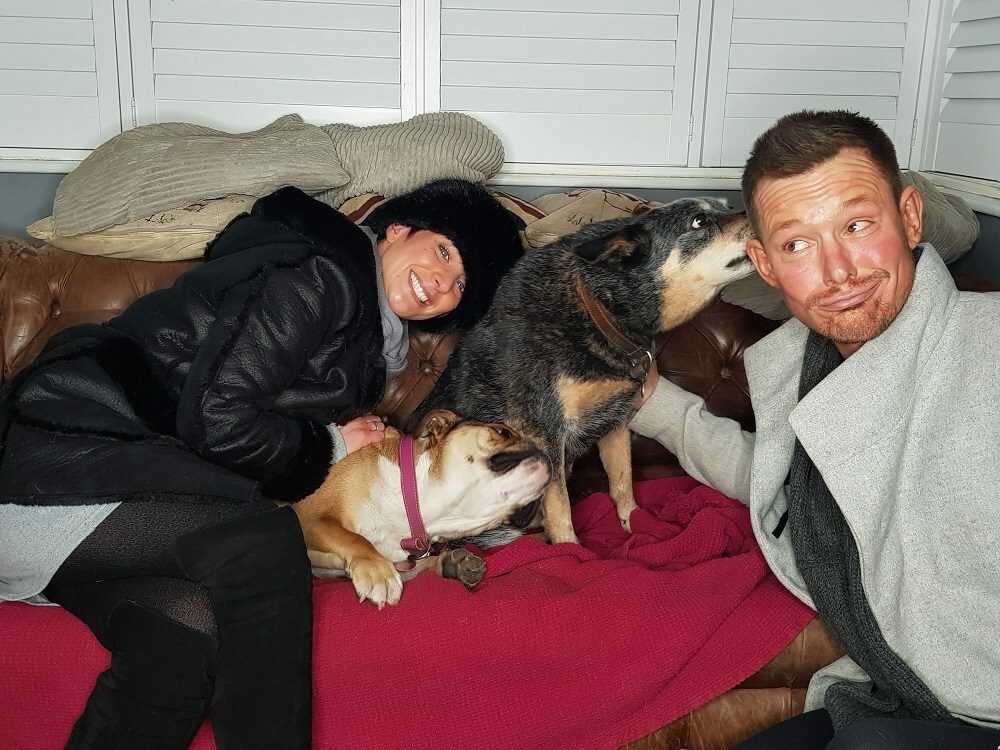 Gillian spoke about life with her adventurous Golden Retriever Wendy and said, ‘I would ask her if she actually wants me to throw balls for her or if she's annoyed that she brings me her toys and I throw them across the room. It’s a common conundrum (laughs).’

‘I hope she would say she likes fetching them but you never know, do you? I sometimes think she brings me that and then she looks at me like ‘Why don't you just go and get it?’. 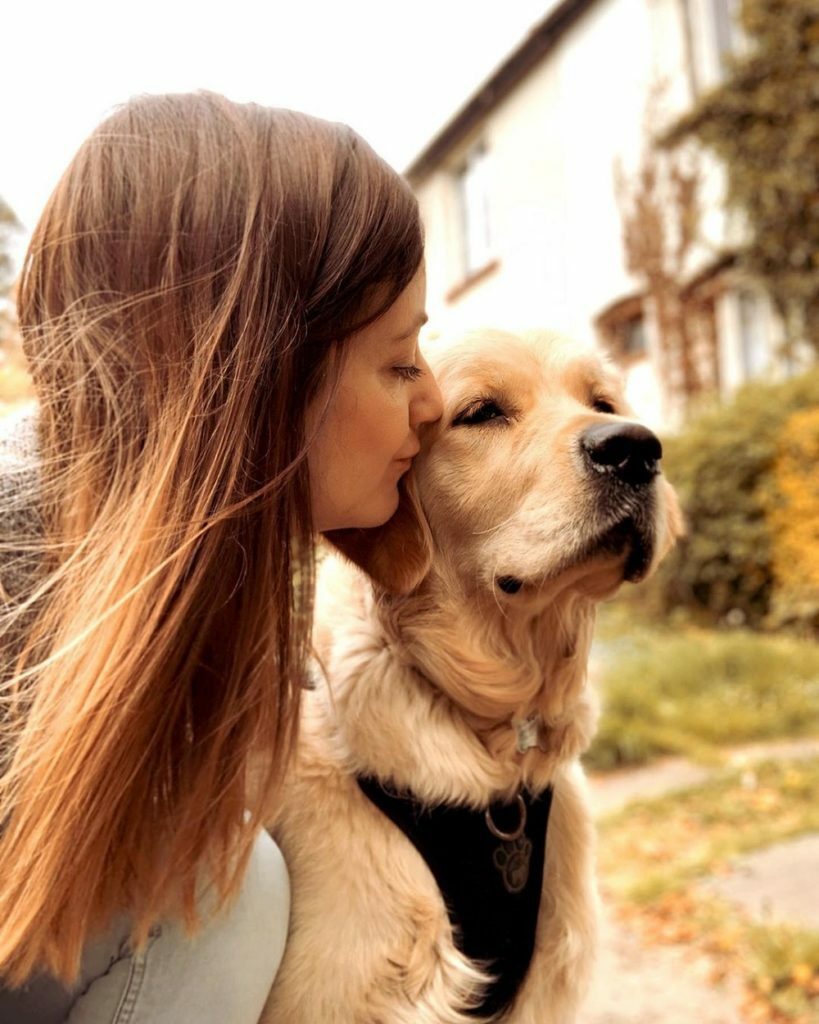 Polly tells us that they broke all the rules with their newest rescue dog, Barbounia.

She said, ‘I would really like to know what happened to him to make him so deeply suspicious of strangers. He has been with us a year now and still there are situations that make him so scared.’ 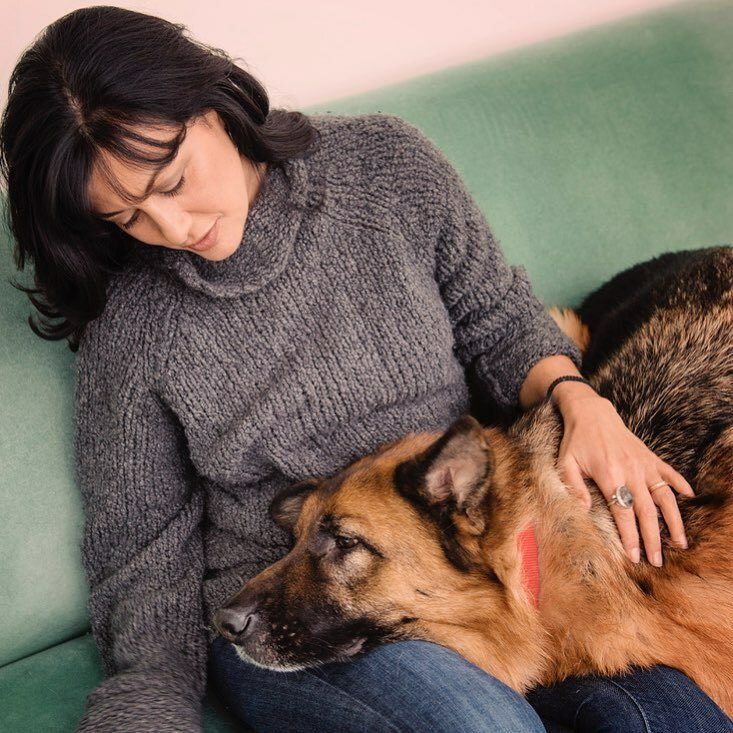 Rich who adopted Bada, a teacup Maltese, said, ‘I would ask Bada if she is happy.’

“Ever since Bada has moved in and lived with me, I have always wanted her to be safe, comfortable, and happy. Seeing her every morning when I wake up, running to me when I arrive home from work, and barking in excitement when I feed her fulfils me with so much love, joy, and happiness."

"I would hope she would reassure me that she is in fact very happy and feels the healthiest she has ever felt. Her pain is my pain, and I would never want her to hurt in any way whatsoever.”

Karen who says dogs have always played a big role in her life. And at home, Karen’s three rescue dogs, Marley, Betty and newest member of the squad, Phoebe, keep her and her partner, David busy, answered us:

‘Oh, good question. I’d ask Betty ‘is there anything I can do today for you?’ and I think she’d say ‘yes, can you please get Marley out of my bed’. 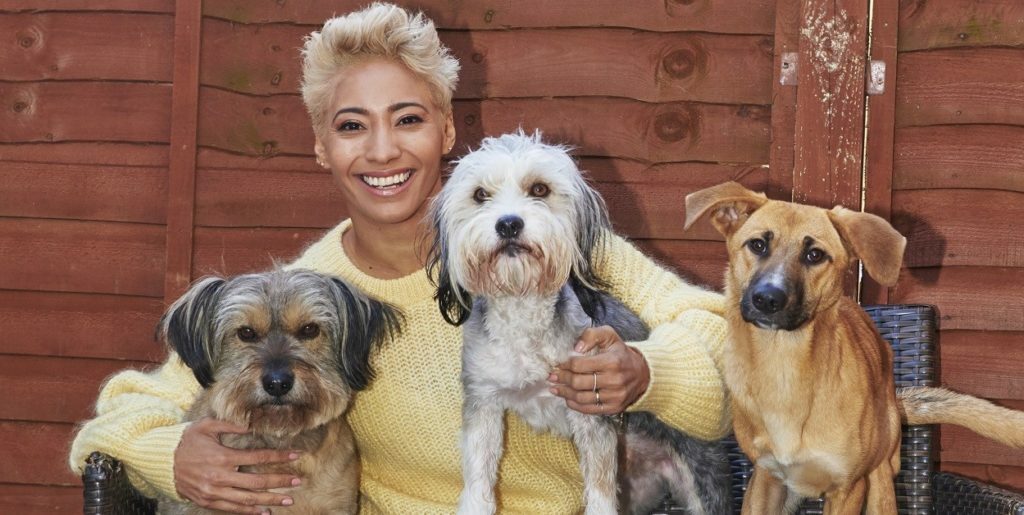 Anouska bends down to stroke her two dogs, cocker spaniel Otto and cockapoo Stanley and tells K9 Magazine “I'd ask, if you could have one wish for a day, what would it be?”

She hopes they’d say,
Otto: To be able to eat all day, with an endless supply of food.
Stanley: To be invisible for a day, so I could catch the pigeons in the garden! 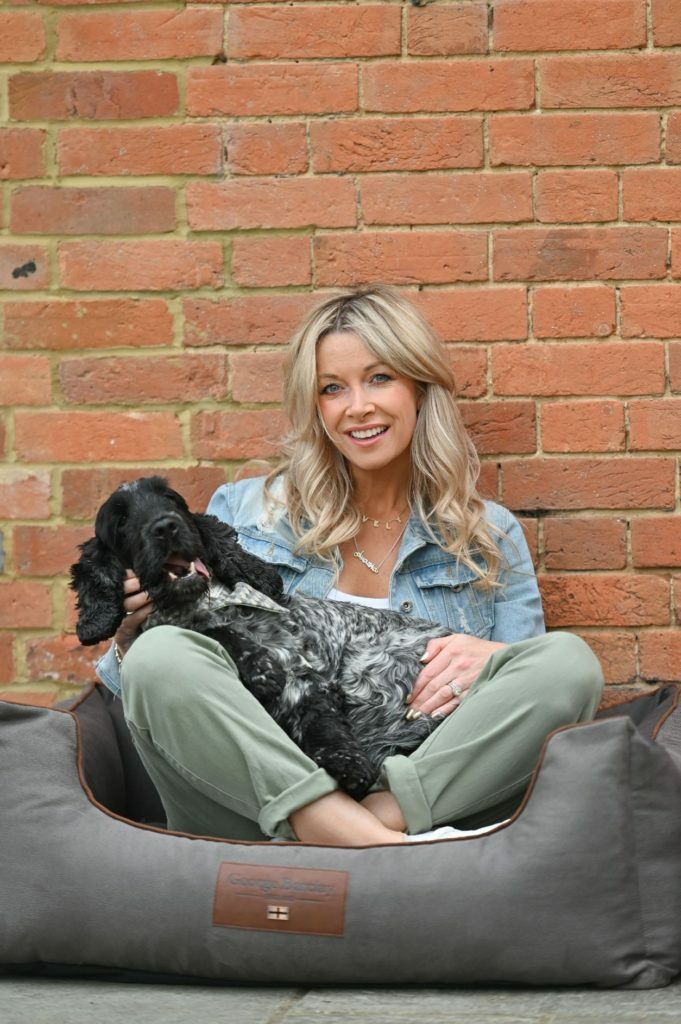 There you have it folks! Even celebrities have the simplest of question to ask their fur companions.
What about you, what would you ask them and what do you think they would say?