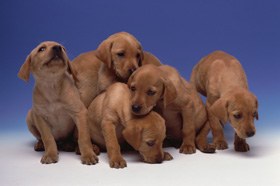 When you bring a new puppy into your home it can be an exciting time for the humans in the household, but for the puppy it can actually be quite a stressful time, writes Natalka Jacyszyn, Dog Psychologist.

Just imagine for a moment, your puppy who is only eight weeks old, since the day it was born it has been able to have the comfort and security of its mother and litter mates for company and to curl up with and go to sleep or even to play with, So to suddenly have that all taken away from you must be a very scary, lonely and insecure place to be.

Puppies howl at night for a number of different reasons, these could be fear, or boredom or attention seeking, but more often than not a puppy will howl because it is lonely and wants some company. Dogs are pack animals and so they do not like to be left all alone and so they will howl to call their pack, except now there is no pack to call, so it howls to call its newly acquired human pack, only most people, if not all don't really like their puppy howling no matter what the reason may be and find it quite annoying especially if its at night time when they are trying to sleep and even worse, thinking that the neighbours will hear.

Howling for a domestic dog is just a form of verbal communication and it is an instinct that they haven't lost, the origins of which go way back to the dogs' wolf ancestry.

[premiumcontent]Most new owners of a puppy feel so sorry for their new puppy that they will not think twice about going and giving him some attention, but this only fuels the behaviour.

Your puppy will eventually stop howling, as it gets used to its surroundings and its new owners. Providing that you remember not to go to your puppy while he is howling.

There are a few things you can do to help your puppy stop howling and settle into its new home.

Play with your puppy before bed, this will tire him out, like young babies, puppies get tired very easily. Then you could take him into the garden so that he can relieve himself so that he is more comfortable, then your puppy can settle down for the night.

You can put a hot water bottle in your puppy's bed, but you must make sure that you wrap it in a towel first, NEVER put it next to your puppy's skin as this could burn your puppy.

You can also put a cuddly toy in your puppy's bed, this will resemble a litter mate, or a ticking clock as this will simulate its mother's heartbeat.

You can also leave a radio on low so that your puppy feels that he has some company. Also you could put a tee shirt or something that smells of you in your puppy's bed with him, or sometimes if you have bought your puppy from a breeder they might be kind enough to give you a piece of material that smells of the mother and litter mates, this will help settle your puppy until he gets used to his new home.

Although this may be hard, do not go to your puppy at night if he starts howling, try and ignore it as if you go to your puppy it will just be learning that the noise it is making attracts your attention and he will do it all the more. Your puppy will soon stop once it realises that no-one is coming.

At different times of the day, when you are in, try and leave your puppy in one room, while you go into another, you can do this for a short amount of time (maybe a minute or so) to begin with and then gradually lengthen the time you spend in another room away from your puppy.

Alternatively you could always buy a dog crate, these are available from most pet stores or even online. Your puppy could sleep in there at night, if you are going to do this though, leave the crate door open and accessible during the day so that your puppy knows that it can go in and out freely, or you could even feed your puppy inside the crate, but do not shut the door, make sure that you never put your puppy in the crate for punishment as he will see it as such, and he will not want to go into the crate at all.

You can put a blanket over the crate if you want as this will make your puppy feel more secure. Puppies do find these crates quite comforting as they like building dens for themselves.

If you were to acquire your puppy when he was a little older, this process would still be the same.