Have you ever wondered how simple it would be to travel around Europe with your dog using only public transport? In the last edition of K9 Magazine, travel writer Paul Wojnicki, set sail with his family to Holland with their 5 year old Jack Russell, Falco, in tow.

In this edition, their journey unfolds as they continue their adventures.

It seems a shame to leave Dresden behind, and I’m annoyed that we didn’t stay for more than just two nights at the fantastically dog friendly Swissotel, but Prague beckons and I’m looking forward to visiting a city that Falco has visited every year since he was born.

We’ve only planned for one day in Prague so we need to make the most of the day. We'd planned on renting a car to get around the city as conveniently as possible, but couldn't quite get hold of a vehicle that had a milieusticker Duitsland kopen sticker on it, which is a permit if you are to travel around the some specific cities. The first train leaves just after 4am, which is a little too early even for Falco, but they leave every two hours thereafter so we take the 6am service instead, which has us in central Prague by 8:30am.
The cobbled streets of the old town aren’t exactly the most pushchair friendly in Europe but they’re certainly full of character and Falco enjoys the walk to Charles Bridge, which is still relatively empty just after 9am. 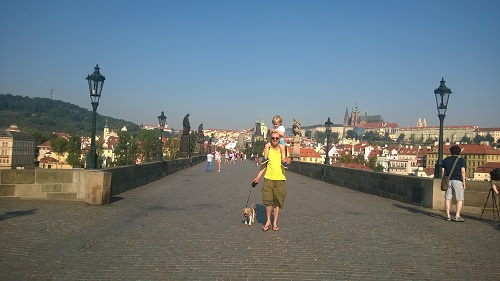 We watch the street vendors and artists setting up their stalls then head to the castle to watch the changing of the guard. Afterward we stroll through the cobbled streets of Mala Strana- or lesser quarter- where Falco makes friends with a Dachshund, a German Shepherd, a Golden Retriever and a couple of American tourists who tell us they’re missing their dog Kaya.

When the weather begins to get more oppressive we head down to a bend in the river directly below Charles Bridge, where the waters are shallow and slow moving enough for Falco to enjoy a swim. Afterwards we lunch back in Mala Strana and then retreat up Petrin Hill via the funicular and stroll around Petrin Park where the dogs are too numerous to count. Dogs in Prague are very accustomed to socialising, unlike some big cities I’ve visited, and Falco literally has himself a ball running around with his Czech mates. 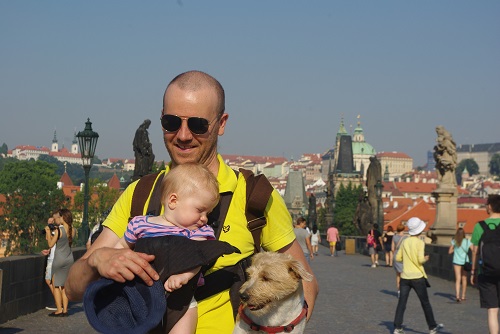 At 4pm we take in a movie at the cinema. Yes you read that correctly, we take our dog into the cinema. The Kino Aero movie is a million miles away from the soul-less multiplexes that have taken over our own towns and cities. It’s what we’d probably call art-house, but it shows a combination of modern and classic films. The 3pm matinee is Minions- in Czech and played at a sensible volume - which Harrison enjoys more than the English version for some odd reason, while Ella and Falco both fall fast asleep.

Then it’s dinner on Wenceslas Square and a walk back to the train station for the night train to Poprad in the Tatras Mountains.

The AutoVlak train- which translates to Moto Rail because it also transports cars- runs nightly at 10pm from Prague to the High Tatras in Neighbouring Slovakia. Dogs are allowed in couchettes only, rather than sleeper berths. To be honest the couchettes are nicer in some ways- for a start they are more spacious- but you have to book an entire 4 bed couchette to yourself to travel with a dog. It’s still relatively cheap- we paid less than £100 for the five of us- but it’s not the Orient Express. It is however comfortable enough and we’re all fast asleep within an hour of setting off from the station.

The following morning we wake up to find the jagged peaks of the Tatras Mountains looming ahead of us. The city of Poprad isn’t the most photogenic place we’ve been to but then it’s just a transit town for us. After a quick walk to stretch our legs and relieve Falco’s bladder we hop onto the mountain train that whisks us up to the mountain lake to nearby Štrbské Pleso, a mountain lake resort with chair-lifts, ski jumps and- most importantly of all- a lake.

We enjoy the mountain air and waters for three lovely days and Falco seems to be in the water more than he’s out of it. There’s plenty of other towns and resorts in the area but we decide to stay put and relax by the lake for three whole days, it is very picturesque after all.

We do have a minor incident on day two, when quite unexpectedly we bump into a deer at one of the hotel car parks. Luckily I manage to grab Falco, and Alena manages to grab the camera, before he gets his butt whipped. The deer didn’t look like he planned to back down!
As with Dresden, it seems a shame to leave the Tatras, but all good things come to an end and we’ve still got a long road ahead of us, starting with a three hour train ride to Bratislava- the capital of Slovakia and former capital of the Austro-Hungarian Empire. 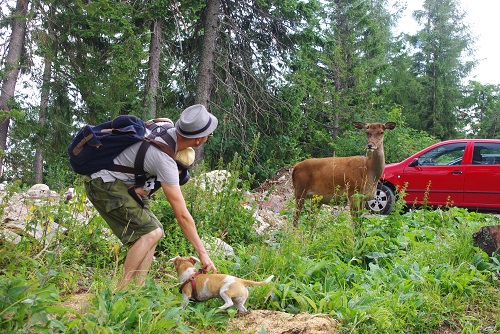 The first thing you notice in Bratislava is that there are relatively few tourists for such a beautiful imperial city. Perhaps this is because of the popularity of nearby Vienna, Budapest and Prague. The second thing you notice is that everything is so cheap. Our Radisson hotel for instance only cost us £52 for the night and it’s right in the middle of the old town. With prices like these it makes the ideal base in which to explore Slovakia, Budapest and nearby Vienna.

We stay for a total of five nights, exploring the old town of Bratislava on our first day, catching a two hour train to Budapest on the third day and another two hour train to Bojnice Castle on the fifth day. On days two and four we just relax by the Danube, where Falco swims in the shallows.

It’s hard to say which is the highlight but Budapest is remarkably dog friendly - with dogs being allowed almost everywhere including the famous Castle Hill. There’s also a great island park in the middle of the Danube called Margaret Island (Margitsziget) with large green meadows. This is one of the favourite places for dog lovers in Budapest and we see lots of them chasing squirrels and birds. There are plenty of things to explore on the island including a musical water fountain and the ruins of a Dominican monastery.

Bojnice Castle in central Slovakia is very impressive as well, almost Disney-esque actually, and is remarkably crowd free for a tourist attraction. Falco wants to swim in the moat there, but isn’t allowed so has to content himself with cooling off in one of the fountains.

Leaving Bratislava on day six we take a one hour train to Vienna and spend the morning strolling exploring Stephansplatz, a large bustling square dominated by the massive presence of the Gothic Stephansdom where we notice a number of dogs among the sculptures adorning the facade.

A good omen? Perhaps a sign that the city is as dog friendly as Prague or Budapest? Alas not. Many of the parks that adjoin the palaces are strictly off limits to dogs, so we have to make do with seeing some of the city’s landmark buildings instead. Falco doesn’t seem too bothered but Harrison wants to go to the park and can’t understand why a dog wouldn’t be allowed in one. Neither can we, but them’s the rules so we have to stick by them. 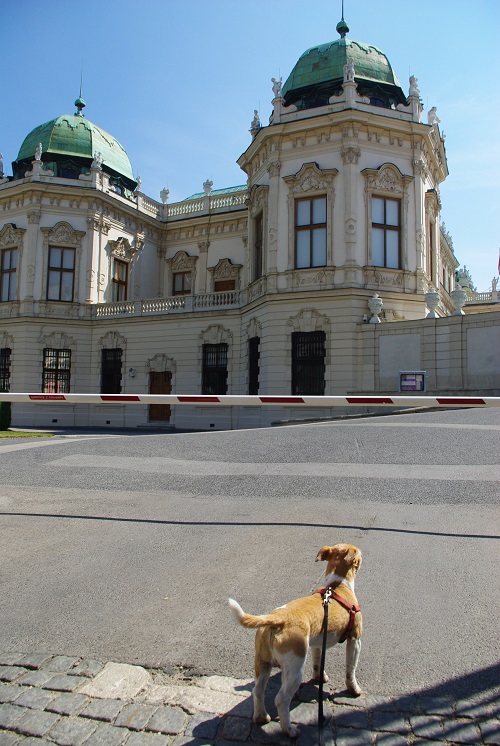 We’re only here for one day anyway, our train to Venice is in less than eight hours.

The EuroNight service from Vienna to Venice is similar to the City Night Line from Cologne to Prague in many ways but feels a little smaller and a little more modern. This time we have to wait a couple of hours before the steward turns our seats into a bed- a minor annoyance that’s offset by the complimentary wine in my compartment. The conductor mutters a few words about Falco being on the bed as well but we point out the fact that he’s lying on his own blanket and that’s the end of the matter. And once again we’re all fast asleep shortly after we leave the station.

We arrive in Venice at 09:35 sharp, and my rucksack is in left luggage by 10am, which gives us nine hours to explore the famous city. Firstly we take a Traghetto ride across the Grand Canal- they are virtually gondolas after all, yet cost just fifty cents and always allow dogs on board.
We then take an age strolling toward St Mark’s Square getting lost in the narrow streets and having Falco stroked by numerous British tourists, many of remarking on how they’d love to bring their dog away with them.

“Do it,” I tell them. “It’s much simpler than you’d think. As long as you like trains.”

Afterward we picnic on one of the world’s most beautiful squares, while five piece orchestras serenade the guests of Caffe Florian, who are paying upwards of £30 for a couple coffees. We sit and enjoy the music for free as Falco laps up his water and biscuits with St Mark’s Basilica and the Campanile behind him.

We then take a water bus back to the Grand Canal and stroll toward the Church of San Rocco, patron saint of dogs, whose life was saved by a hunting dog that brought him food and licked his wounds to heal them. After paying our respects together we wave goodbye and head to the Palazzo Venier dei Leoni, the museum and former palace where Peggy Gugenheim, renowned art collector and the ultimate dog lover, is buried with her 14 dogs.

And then it’s back to the train station, for our final overnight train of the journey- Venice to Paris via Milan. The Orient Express? Hardly, but the Thello will do for now. 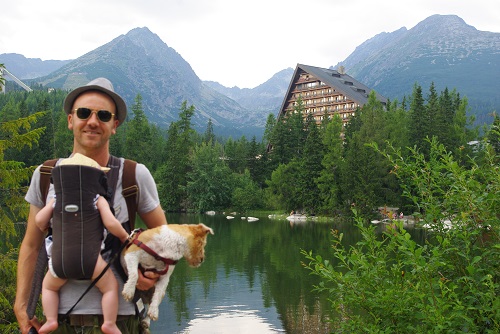 Auto Vlak trains run from Prague to Poprad, Slovakia in the High Tatras every night at 10pm. Dogs are not allowed in first class sleepers but are allowed in couchettes, as long as you book the entire 6 berth couchette. This cost us less than £100, including Falco. It’s really difficult to book this online so we had to book at the train station in Prague. The company assured me there would be space available when I contacted them to book online and indeed there was, though I was nervous about this until I had tickets in my hand.

The Euro Night departs Vienna at 21:36 nightly and arrives in Venice at 08:24 the following day. Private double compartments are available from around £130 each way with a €50 supplement for dogs. These tickets are available way in advance at www.oebb.at/en/

The Thello night train leaves Venice for Paris every night at 19:20, arriving at 09:30. Fares start at around £200 for an entire 4 bed couchette, or £250 for a two bed deluxe sleeper. Both have beds but the sleeper has a sink as well. You need to pay a 50 Euro supplement for dogs. Tickets can be purchased at www.thello.com

Paul Wojnicki is a Yorkshire based travel writer and author of France: A Woof Guide. He has spent two decades travelling every continent on earth and the last five years travelling with his dog Falco. His latest book Europe: A Woof Guide will be available on Amazon in time for Christmas.