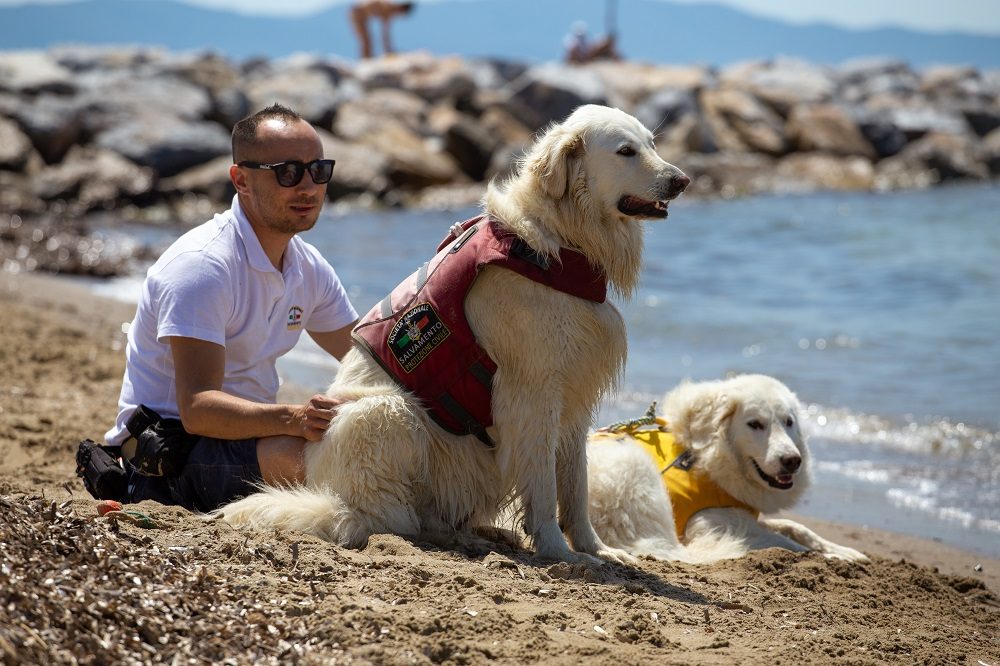 Meet Mia and Aida, the first two dogs of their breed to become qualified water rescue dogs in Italy.

It was pure fate that led Igor Minghetti to Mia six years ago. He tells us how a challenge to turn Mia into the first qualified Maremma Abruzzese Shepherd water rescue dog in the country changed the course of their life.

“I was born in Rome in 1979 and together with Mia and Aida, we live in Tuscany in Scarlino, a town in the province of Grosseto.

“I am an instructor for water rescue dog units and our story begins in January 2013 when I decided to adopt a Maremma Abruzzese Shepherd (also known as PMA) puppy found in the rubbish bins in Melfi, Potenza in the Basilicata region.

“At the time Mia was called Nuvola and she had been found by a volunteer, Silvia Ferrara, who lived in the area when she was just a few days old with her umbilical cord still attached.”

Silvia had been alerted by the villagers of some puppies in a dumpster under their home. She took the whole litter home and raised them for three months.

“When I saw an advert for Mia, I adopted her and from then on I can literally say that she has changed my life. I chose to call her Mia because at that moment I thought 'You will be my light, the light that guides me.'

“Mia came home to Tuscany with me in early May and we started taking long walks through the woods and along the seashore. Right then I noticed her strong aquatic qualities because without a leash she would run and dive into the sea with no fear at all. It seemed she was born with a natural love of the sea.

“She showed me that she loved the aquatic environment very much by not only diving into the sea but also rivers, lakes and even puddles.”

Igor decided to challenge himself and Mia by being the first one to get her breed licensed for marine rescue units (the K9 unit).

“Many people took me for crazy when I talked about Mia and the work I wanted to start with her. Everyone told me that it was not a breed suited to that kind of work and that if I wanted to work in the water I would have to choose another breed, for example, a Labrador Retriever, Golden Retriever, Flat-Coated Retriever or a Newfoundland.

“I have never listened to those voices and I went ahead with Mia on our way until one day in 2014 when I met Alessandro Semplici, a dog trainer for rescue dogs (the K9 unit). I spoke to him about my goals and he explained to me that he had never worked with Mia’s breed in the water but at the same time told me that he would not back down for this new adventure, a nationwide experiment.

“In October 2014 I began to prepare Mia for this type of activity and we spent all autumn, winter and spring attending the training sessions without ever skipping one.

"In June 2015 we presented ourselves for examination in front of a commission consisting of the coastguard, seafaring instructors, swimming instructors and instructors for dogs, overcoming it with great success and great satisfaction on the part of everyone for the excellent work done. We did it together as a team.”

How Do You Train a Water Rescue Dog?

“This is one of the most frequent questions asked of me by the people who see dogs at work. First of all, you need to have great empathy with your dog and I stress this because in this work the relationship between the dog and their handler is fundamental.

“Working with a dog of another person would not bear fruit because the animal would be subject to different habits depending on the person who runs it.

“To understand each other better, how many times have we been faced with those family situations where the husband manages the dog in one way and the wife in another? The husband allowing him, for example, to do certain things; while the wife behaves in the opposite way for the same things, denying the dog the liberties that had been granted as okay to do by her husband.

“This type of training is incorrect for every animal, but it is even more incorrect in working dogs as it will lead to the same series of difficulties for dogs and handlers, so the dog must have only one figure of reference, one handler, and that can make the dog keep certain rules, always, to teach him an excellent basic education to respond very well to commands given such as, ‘sit’, ‘land’, ‘stay’, ‘come’, ‘forward man’, ‘boat’, ‘right’, ‘left’ and ‘shore’. Controls that are taught by working on the ground and calling the attention of the dog with rewards, such as cuddles or any other game (a ball, for example) as long as it is used only on the beach.

In these basic training sessions the dogs are counter-conditioned to certain real life external stimuli by being training in the middle of the beach's usual noise and activity.

Igor says this is important because the dog can then be conditioned on what each noise and splash of water means in real life situations and learn to understand commands given by handlers, even at a distance.

“To work on short and long distances the commands are taught to the dog both verbally and visually, so each command or word corresponds to a gesture with the hands, even simply with the look.

“Personally and on the front line, I got involved with Mia teaching her an excellent basic education on and off the leash and achieved a good level of response. Then we carried on with the approach in the sea.

“When moving from land to water, a helper with the dog’s favourite toy usually, will position himself in the water first near the shore, gradually moving further away. They will entice the dog to enter the water by agitating his favourite toy and then on command from the handler saying ‘forward man’, the dog will head towards the person.”

“We use the term ‘game or exercise’ because all these work activities are experienced by the animal as a game together with its leader. There are no sources of stress for the dog and if it should occur, it’s always a good rule of thumb to rest the dog.

“The first step for working with Mia was to find a game that she really liked so much that it was suitable to stimulate her in games of replay and swimming to a person.

“I have tried balls in all shapes and sizes and various games but none of these was so fun for Mia. Instead she favoured a sock filled with my sponge, tied on top with braided rope.”

How Fate Expanded the Family (Twice)

“After a few years, I decided to renew the bet and on a summer evening looking again on the web and social network, I saw the announcement of a seven-month-old dog called Rudy that was looking for a new home.

“While I was looking at her photos in that announcement, my playlist played Rino Gaetano just with the song ‘Aida’ and to his words of ‘Aida how beautiful you are’ I told myself that if Rudy came to stay with us, I would call her Aida.

“That same night I texted the number in the advert saying that I was interested in the dog. Destiny, for those who believe in it, wanted this white heart to come live with us because the girl who guarded Aida already knew who we were as Silvia Ferrara [the woman who helped Igor find Mia] was a friend of hers.

“As it was for Mia, I reached Aida in Florence after an eight-hour relay and the next day I took her immediately into the sea.”

In 2018 Aida and Mia were joined by a third dog who Igor met while visiting Basilicata in southern Italy to discuss a dog training project for local schools with Silvia.

While there, a stray, neglected dog spotted him and spent a whole afternoon following him, Aida and Mia on their afternoon off. When the time came to go back to the hotel, the dog followed them back to the car and wanted to jump in with them but Igor was uncertain of what to do.

Later that day when he got back to the hotel, he discovered the dog he’d named Nena earlier that afternoon had followed their car and was waiting outside. Igor told her if she was still there the following morning, she could come with them.

She was. And she is now part of the family, studying to become a surface and water rescue dog too.

Igor concludes, “In this year spent with us she has learned many things and has become a dog loved by all the people who meet her. I believe history repeats itself, history is us.”

Find out more about Igor’s work here and here.

You can also keep up to date with Aida, Mia and Nena’s news on Instagram and Facebook.

In this article:Featured, Issue 127