Dogs have long been associated with sniffing out a variety of substances, including drugs and explosives. They are also often seen assisting in search and rescue, helping to find lost people. However, a lesser known skill dogs have is the ability to be trained to locate corpses on land and beneath the water, says Lorna Irish.

These dogs are known by a variety of names including cadaver, human remains detection (HRD) and victim recovery (VR) dogs. A variety of different breeds of dogs, typically working breeds, are often trained for cadaver detection work. Labradors, English Springer Spaniels, German Shepherds, Belgian Mallinois, Cocker Spaniels and Border Collies have all been shown to be capable of this type of work. 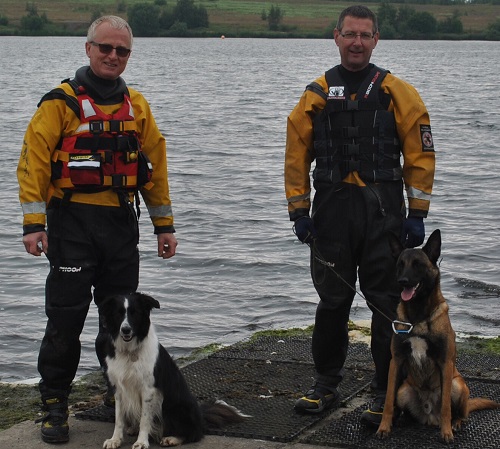 Dave Marsh and Mike Dermody from the National Search and Rescue Dog Association with their water search dogs, 'Sasha' and 'Quincy'

In the UK, cadaver dogs are trained on the scent of dead pigs, which are said to have the closest scent to human remains, though this is yet to be scientifically proven.

Dogs are trained to recognise the scent of decomposition and signal to their handler. This signal, or 'indication' is a trained behaviour to allow the dog to communicate with its handler to let them know they have identified the scent of death. This indication may vary from anything to a bark to standing stock still with their nose on the source of the scent. One cadaver dog, Cecil, which I have personally worked with does a movement affectionately known as the 'Cecil dance' for his indication.

VR dogs have a number of different uses, including locating burials, recovering scavenged or dismembered remains, as well as indicating where a body may have been previously. This means they are able to detect the scent of a deceased human even when the body is no longer present, for example if it has been moved, or concealed.

This is not strictly limited to forensic search of homicide victims, but may also be applied for search and rescue in missing person’s cases where the person may have died. They may also be utilised to recover bodies from both suicide incidents and accidents.

They have been utilised in natural disaster situations where remains may be dispersed over large areas. This can include wildfires which spread so rapidly that people are not able to evacuate quick enough – for example, hurricanes, landslides, tsunamis and earthquakes.

Cadaver dogs have been successfully used for other disasters such as air crashes. For example, dogs were employed to search for human remains after the 2003 Shuttle Columbia disaster and, more recently, after the MH17 crash.

Dogs have also been used for search and recovery of human remains after terrorist attacks. The first documentations of dogs being used in the UK to help recover remains in the aftermath of the Pan Am bombing over Lockerbie. They were also used in both the London 7/7 terrorist attacks and New York 9/11.

Bretagne, the last living dog who helped with searches after 9/11 recently celebrated her 16th birthday and the city which never sleeps came together to help her celebrate, showing the importance her role, and many others play.

In the UK alone, there were over 380 accidental drownings in the year 2013 (RoSPA 2015). Human remains may become submerged for a number of other reasons including suicides, disposal of homicide victims and in the aftermath of natural and man-made disasters. 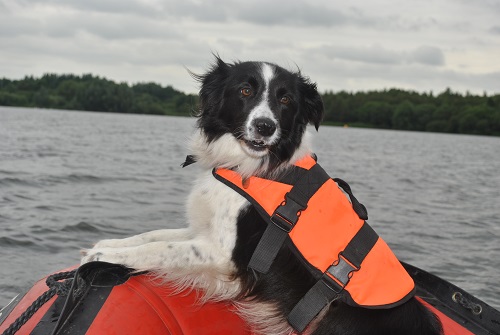 Therefore, techniques for the location of submerged human remains are of upmost importance for body recovery and closure for the individual’s family. Dog’s noses do not seem to be affected much by water concealing the body and are used to narrow down large areas for divers to search and recover human remains. 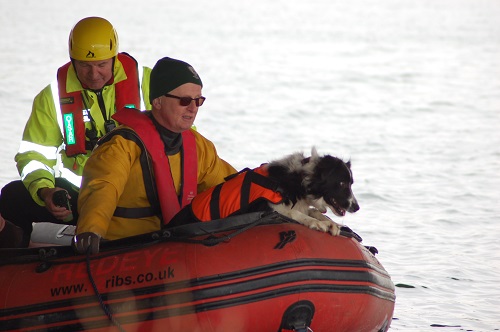 Dogs can be trained to extend their cadaver scenting capabilities to water by working on a boat. The idea of dogs locating submerged people is thought to have originated from the US Navy during the Vietnam conflict, where dogs were trained to locate enemy swimmers and SCUBA divers to help protect American assets, such as boats and bridges. 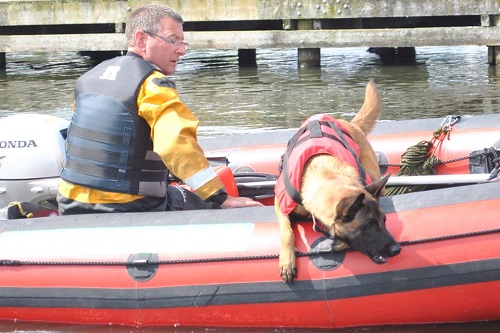 This idea was later developed into utilising dogs for the detection of submerged human remains by the American National Search and Rescue Association in the 1980’s. 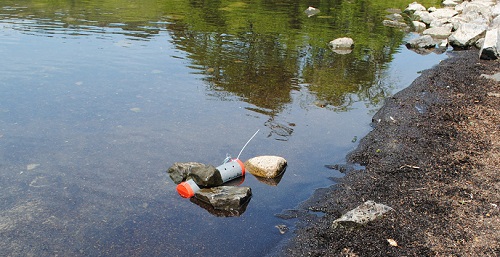 Despite this, these dogs are not often seen or deployed in the UK. The concept of dogs searching water for the deceased is often met with scepticism by individuals in the UK. 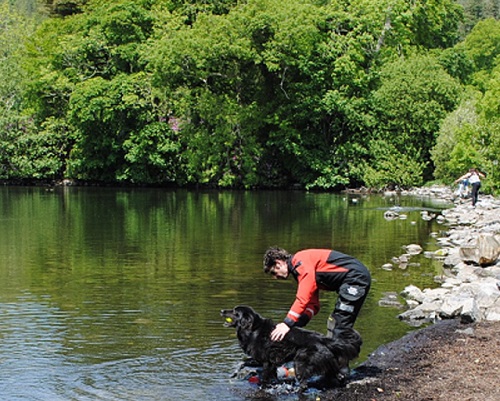 This is often due to a lack of understanding of these capabilities - I am no longer surprised by the dog’s sensitivity of smell! Especially having seen dogs during training locate dead pigs sealed in body bags and dropped at depths of 15 metres. I have also seen cadaver dogs indicate on trees, where the root system of that tree has passed through a grave containing a pig. The only explanation is that somehow the tree was sucking up nutrients, and the smell, from the grave and emitting the 'scent of death'! 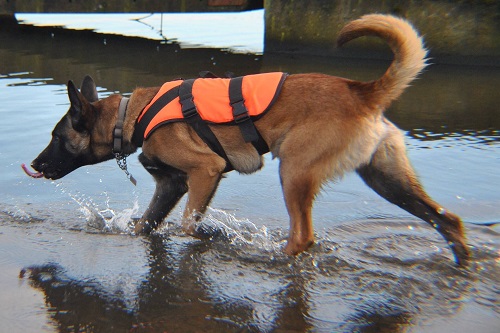 The difficult part of water search is the job of the dog's handler, directing the boat based on the dog’s reactions and behaviour. Furthermore, just because a dog signals the presence of the scent of human remains, does not mean the body lies directly beneath where the dog is indicating. This is because, unlike on land, a body may move up, down and diagonally in the water. Scent may be moved around by the water, particularly if it is flowing or tidal. And, to further confound things, scent on reaching the surface may then be blown around by the wind. The dog handler must therefore take all of these factors into account when relaying information of the results of the dog search on to divers. 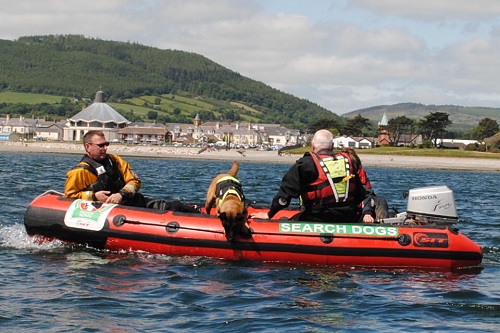 Despite this, dogs have been shown to be successful in locating submerged remains in depths exceeding 30 metres. They have also been used for repatriation services to locate the submerged remains of fallen US soldiers…from WW2! 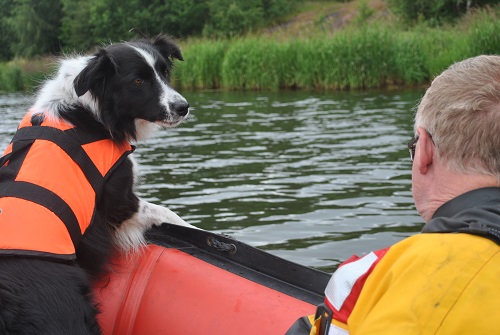 Little research has been done in the domain of water search dogs, though at the University of Huddersfield scent differences from submerged remains versus those on land has been identified. Many dogs are seen to 'taste' the water before giving an indication. It is thought, based on this research, some of the scent of decomposition resides in the water and therefore the dog compares information from both smelling and tasting before confirming the presence of a body. 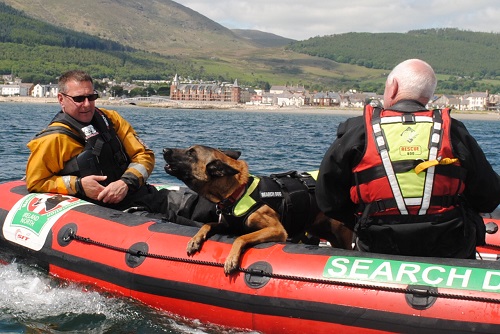 Our understanding of these dogs, particularly in the case of water search, is limited. The capabilities of these dogs are still largely unexplored and more research is required to further our knowledge on how dogs may help reunite families with their loved ones.

The canine nose is a powerful tool and as police dog numbers throughout the UK are being reduced, it is possible that more bodies of the deceased will remain undetected.

With thanks to the National Search and Rescue Dog Association’s Dave Marsh and Mike Dermody for their fantastic pictures of water search dogs, 'Sasha' and 'Quincy' in action.

Lorna Irish, 25, from Ilminster, Somerset is a doctoral candidate at the University of Huddersfield. She holds a first class degree in Forensic and Analytical Science BSc (Hons). Her thesis is entitled: “The identification of gaseous decomposition products in relation to cadaver dog efficiency” and is supervised by Forensic Anthropologist Dr Anna Williams and Analytical Chemist Dr Gareth Parkes.

Her research has involved identifying the scents released from decomposing pig remains and which of these scents provoke an indication from a trained cadaver dog. She has worked with a multitude of police forces and search and rescue organisations in the UK, and has been approached from institutions internationally including the FBI.

She has also spoken on the science behind cadaver dogs and cadaver dog standardisation at a number of conferences, including the UK National Crime Agency. She hopes on completion of her doctorate to continue researching the relationship between chemistry and dog detection.