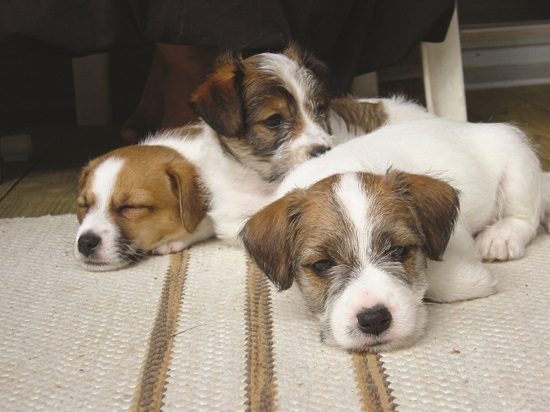 In this, the second installment of the series, Desmond Fellows is looking at the terrier for K9 Magazine. One of the most popular types of working and pet dogs in the world. Terriers are a diverse group of dogs that descended from a small selection of early ancestors. Now relatively redundant in terms of work, the terrier is a hugely popular pet all over the world.

Terriers originated on the British Isles and were a product of man's evolving needs. Compared to hounds, terriers are a relatively new type of dog. The original purpose of almost all of the early terriers was to control pests such as vermin and foxes. Specimens with high prey drives and tenacity were favoured by those that used them for work. The term 'terrier' is derived from the Latin 'terra' which means ground - this is a reference to the work of the terrier, which would 'go to ground' chasing its quarry.

Throughout the history of the terrier, their size and body shape has developed to cope with new challenges. With industrialisation and the need for pest control in urban settings, smaller dogs were favoured, so smaller types and breeds were developed.

Some of the most popular terriers around the world today include the Border Terrier, West Highland White Terrier and the Parson Russell Terrier. Nowadays, there are many breeds that are considered to be terriers, but that are not part of the original terrier group. For example, the Staffordshire Bull Terrier, which has a common ancestry with many terriers, is descended from terriers and bull breeds. Bull Terriers were created when fighting dogs and terriers were crossed in order to give the larger bull breeds more courage and gameness. Since then, the breeds have developed into popular pets as well.

Terriers as we know them today are descended from European hunting breeds. The terrier type became established during the early 1800s, around which time there were two types of terrier. One with long legs and one with short legs.

Terriers are typified by their formidable courage and gameness. They are born with latent desires to chase prey and to tackle it. In the domestic environment, this instinct translates into playfulness, cheekiness and on occasion raises the need for a firm and dedicated trainer.

Terriers are typically in possession of a basic set of very useful working instincts. Their main motivation is to chase small prey. This comes from an instinctive stimulation by motion of their prey drive, which is why many terriers love to play with a ball. In their working environment, rats, mice and rabbits would dart across their line of vision or appear on the periphery. They would then be required to pursue the prey and either kill it or drive it towards the huntsman, usually the latter. Unlike other types of dog, for example retrievers who have a sequence of instincts, the terriers would follow a very basic pattern and perform a relatively simple job.

More important in the terrier's armoury is their innate fearlessness. A weak willed or timid terrier would have been of no use to anyone wishing to rid their farm or home of vermin. Some terriers, such as those that work in water like the Kerry Blue Terrier, would have slightly different responses to certain stimuli, and these would have been the result of generational selective breeding to bring out water tolerance and to develop a desire to hunt in water.

Most original terriers that were initially bred for work a small, compact and sturdy with a head that is large in proportion to the rest of the body. A sturdy frame covered in coarse wiry hair provided the early working terrier with protection against the harsh elements as well as the physical ability to tackle small prey.

Even today many terriers will instinctively shake or 'kill' a toy, demonstrating their strong neck muscles. This is a relic from their days as rat or rabbit killers. The terrier is typically quick on its feet but is not in possession of long legs. Their speedy carriage is down more to their low centre of gravity and muscularity.

Development Of The Terrier

Colour, coat, size and shape are all influenced by the specific roles and environments that man charged early terriers with. Two terriers, both bred for catching rats could look distinctly different from each other due to the fact that one was required to work in coarse undergrowth whilst the other would be required to work in open land or snow. This explains the rather diverse range of physical appearance amongst the terrier set.

As foxes and badgers became more of a problem for land owners and farmers, dogs with the ability to deal with the problem were sought. Any terrier that was required to handle a fox or a badger could be no larger than its prey, as this would prevent the dog from chasing its quarry into the hole, where the 'pest' would be dug out. Due to the limitations on the size of the dogs, they had to be courageous and strong for their size.

Throughout the history of the terrier, their size and body shape has developed to cope with new challenges. With industrialisation and the need for pest control in urban settings, smaller dogs were favoured, so smaller types and breeds were developed.

As with all types of dog, man has been in control of the majority of the development - from encouraging temperament to selecting size and form. As the needs of man developed, he was able to push the terrier type in the way he wanted in order to achieve a dog that suited his situation. Cultural factors such as the abolition of blood sport saw newer terriers without a role, which prompted people to find new purposes such as companionship and work for the once formidable and fearsome fighting dogs.

Due to the keen nose and working instincts of their dogs, owners of terriers would wish to show off the prowess of their dogs in a competitive environment. These competitions would take place in artificial environments designed to mimic the specific type of area where the dog would work. For example, it was a common practice to put two working terriers together in a pit that was filled with rats. The terriers would kill the rats, placing the kill at opposite sides of the pit. When all rats were dispatched, the dog with the most rats at his side would be declared as the winner.

Over time, different specialities would develop amongst terrier breeds. Fell terriers, such as the Patterdale Terrier would be used to hunt in packs, mainly fox. Hunt terriers such as Rat Terriers or Fox Terriers would be used to 'bolt' their quarry, which means to scare it into running towards the huntsman.

During the late 1800s, when terriers were crossed with larger breeds descended from mastiff type dogs to create Bull Terriers, the offspring were larger, stronger and heavier dogs with more fighting instinct than hunting instinct. The purpose was to equip the bull breeds with the tenacity that the working terriers were favoured for.

In more recent times, as work for terriers has decreased and more people keep them as pets, Toy Terriers have developed. These are smaller versions of working terriers that are commonly kept in the domestic environment. Popular examples include the Yorkshire Terrier and the English Toy Terrier.

Nowadays the terrier is a popular pet. They are favoured by many for the feisty attitude and high energy that made them popular and useful as working dogs. Working terriers are rarer today than they have ever been, but some do still have a role. Farmers, pest controllers and hunters still use terrier breeds to control vermin and protect livestock.

Since the advent of dog showing, the terrier type has become much more uniform, with certain breeds steadily coming to look more and more similar. Two of the healthiest dog breeds in the UK are from working terrier ancestry - the Staffordshire Bull Terrier and the Border Terrier, emphasising the hardiness that made them popular in the beginning.

Many fans of terrier breeds believe the true 'terrier spirit' has been bred out of the dogs due to generations of show and conformation breeding. Whilst the need to work will certainly have diminished the gameness of many terrier bloodlines, it is likely that the continuation of show breeding will perpetuate the dilution of the famous terrier spark and instinct that they were originally bred for.

Adele Silva is best known for playing Kelly Windsor in Emmerdale. Having acted since she was a young girl, Adele has appeared on screen...

Raw Revolution – The Theory Behind The Raw Food Diet

More and more dog owners and professionals are taking a second look at what they feed their family dogs. The majority of puppies are...

Clicker Training: What Is It?

The origins of clicker training were based on a science and a technology developed by of one of the most influential psychologists of the...

Confessions Of A Dog Trainer

This month K9 Magazine is launching a new 'Confessions' series bringing you the highs, lows and funny moments from pet professionals. This issue Nick...