My dogs have always loved tennis balls. In this, they're not alone. We use tennis balls as a reward or for fun daily. Our three dogs, Rottweilers Mia, who's 10 1/2 years old, Christopher who is two years old and Danny, a Rottweiler cross who is around four years old, love nothing more than seeing a flood of tennis balls heading their way.

You can see their minds ticking over as they try to work out how many they can each carry at once, making sure they take at least one away from a rival before heading to their nearest safety point - a bed or sofa to bury them in will do for Mia or in Danny's case, the rug in the middle of the floor - it's as if the rest of the floor is hot lava and he won't budge.

Christopher, however, doesn't do this. He'll bring the balls to you, drop multiple balls out of his mouth at once and wait for you to throw the two or three balls he's laid at your feet so he can repeat the action of gathering them all once more. 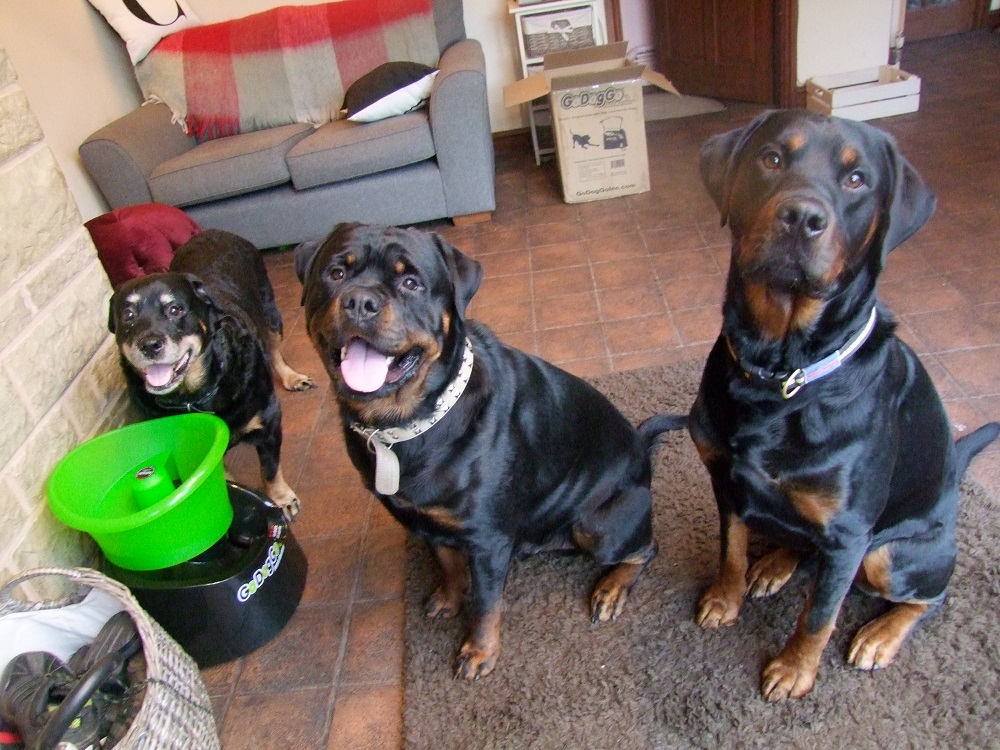 And so having read all about the newest automatic tennis ball throwers on the market we were keen to test one out.

To set this in motion, we were sent two of the world's first fetch machines, the award-winning GoDogGo Fetch Machines, to put through their paces - the standard G4 which is ideal for larger dogs and the JUNIOR for smaller breeds (each RRP approximately $139.99-149.99 plus shipping).

Mia, Danny and Christopher would first inspect before sharing their new gadgets with their friends, Oreo, Charlie and Bruce.

Oreo is a Border Terrier who loves to have fun and lives with his family, Craig, Clare and Lucia Hunter in the West Midlands and as a smaller dog breed, he's taking the smaller JUNIOR for a test drive for us.

Charlie and Bruce live with their owners, Lynsey and Samuel Rayner in Suffolk and although cross-breed Bruce loves to play, Labrador Charlie is the real fun-loving, tennis ball obsessed of the two and they joined Christopher, Danny and Mia in testing out the standard G4 machine. 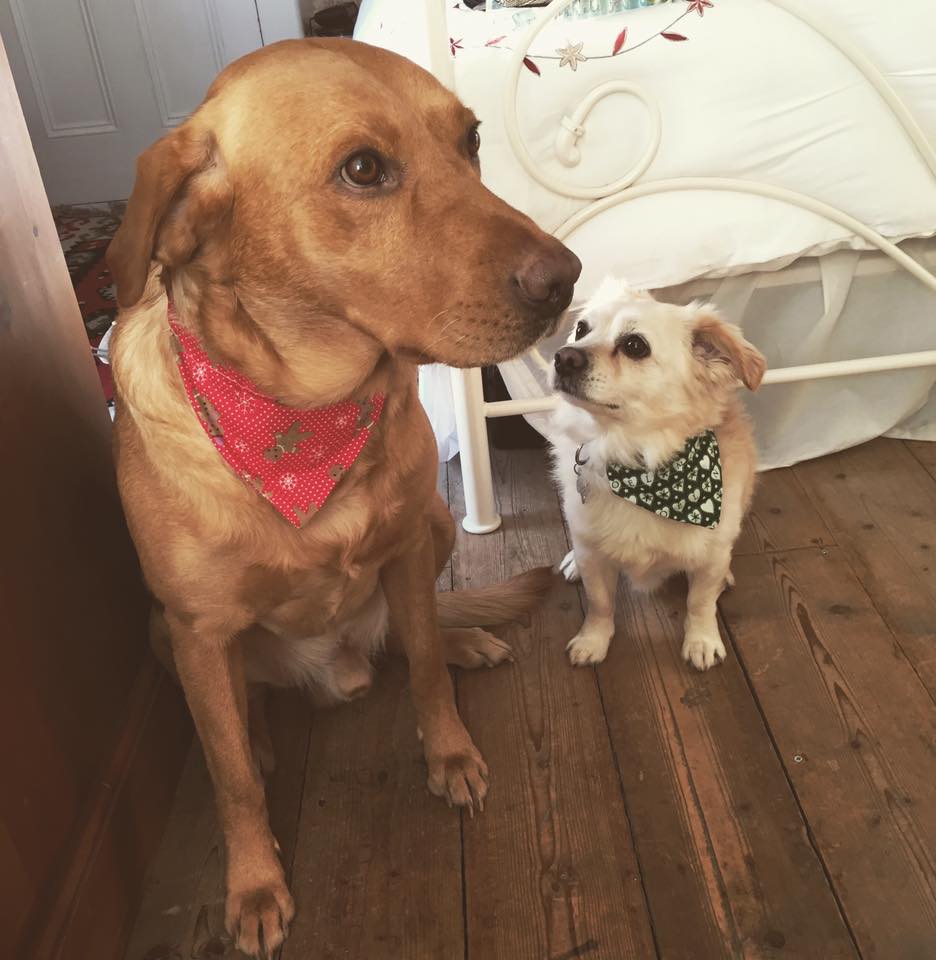 As we unboxed, we were overwhelmed with the generous quantities of balls we received to test with, we can't thank GoDogGo enough for the selection! 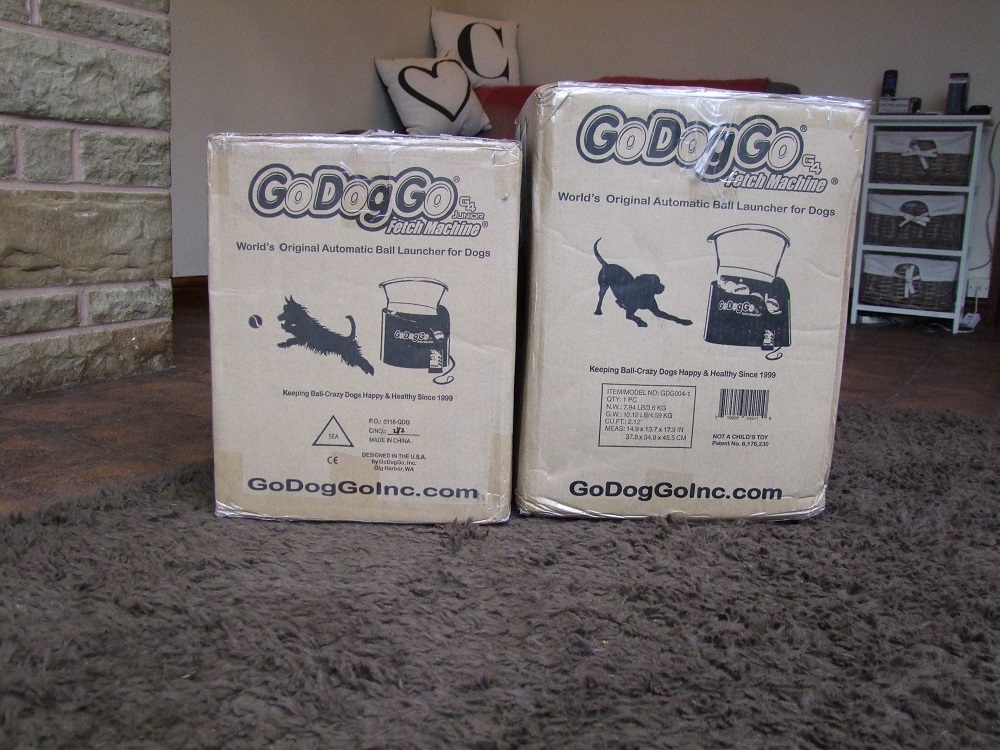 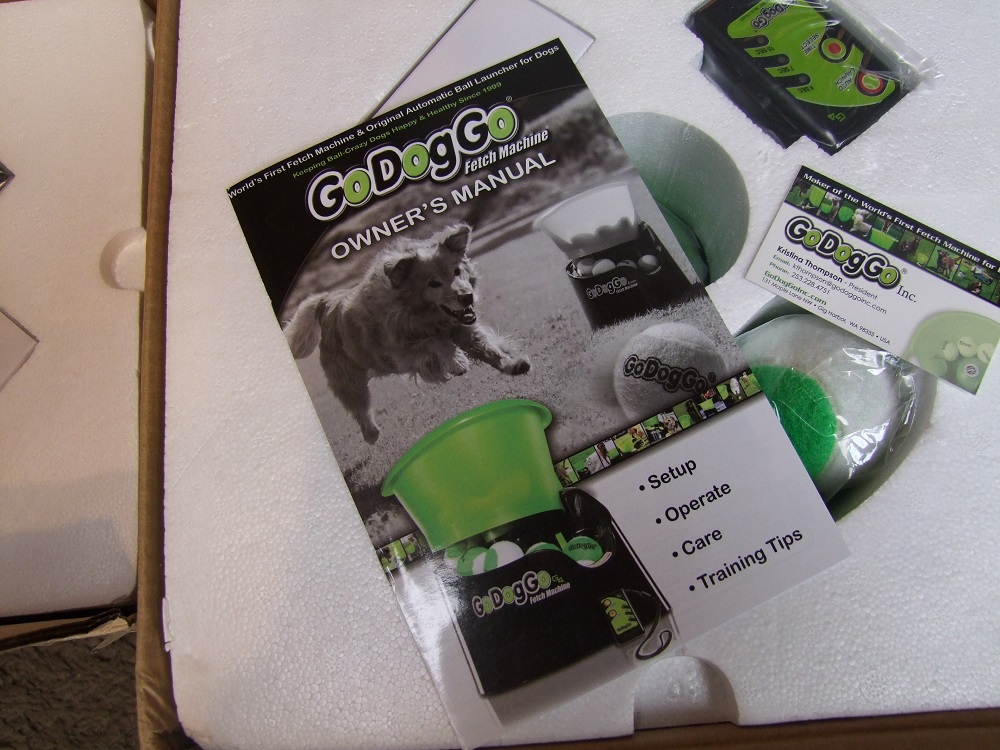 From glow in the dark to harder balls, each machine had their own sets designed to fit each machine perfectly. 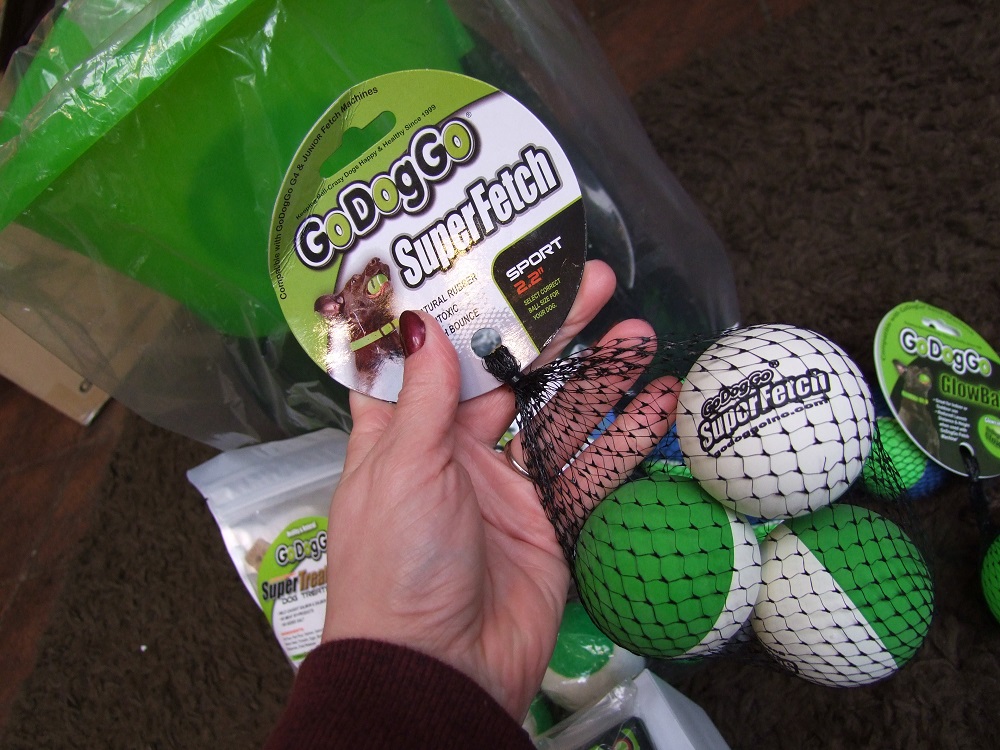 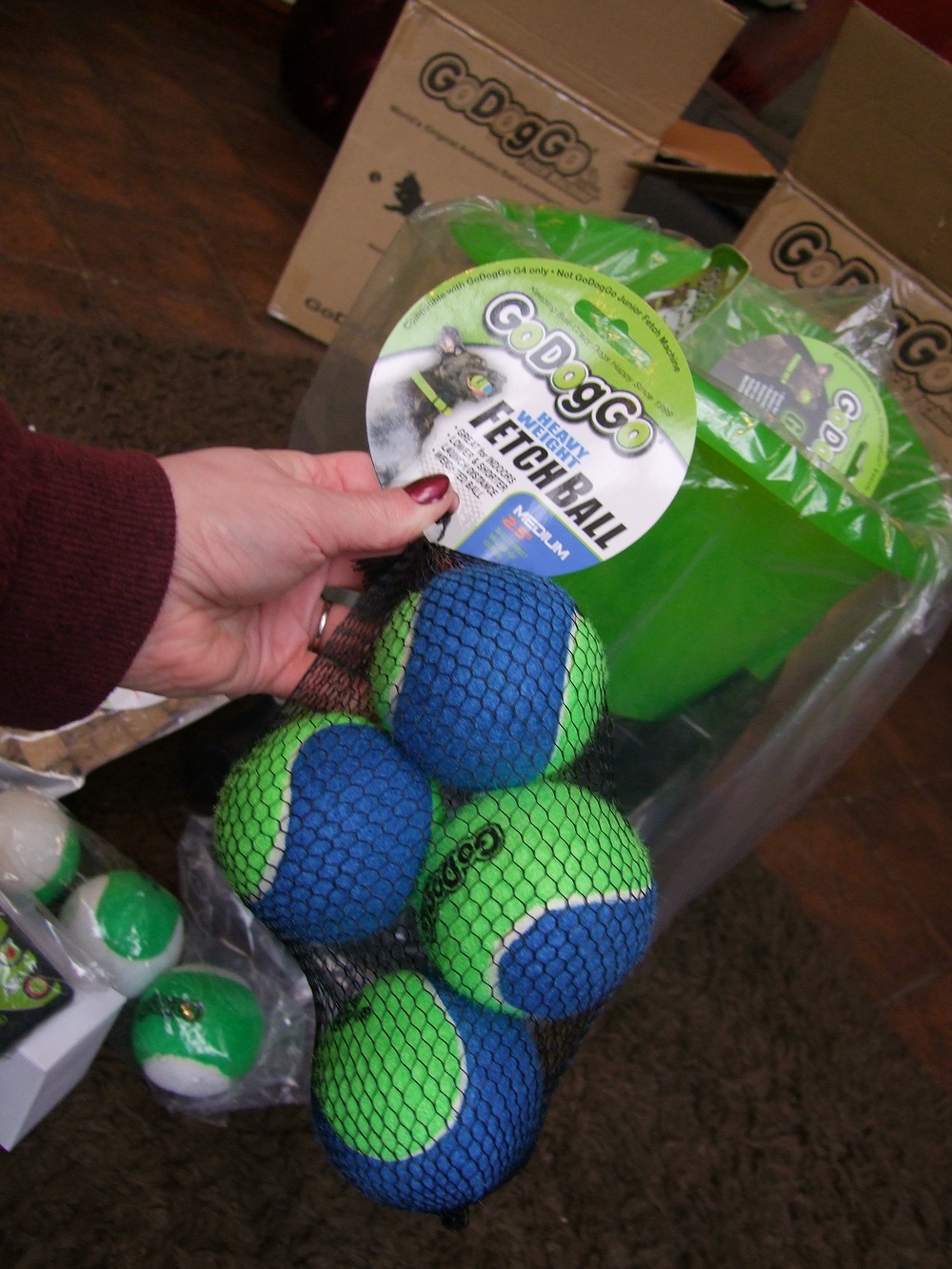 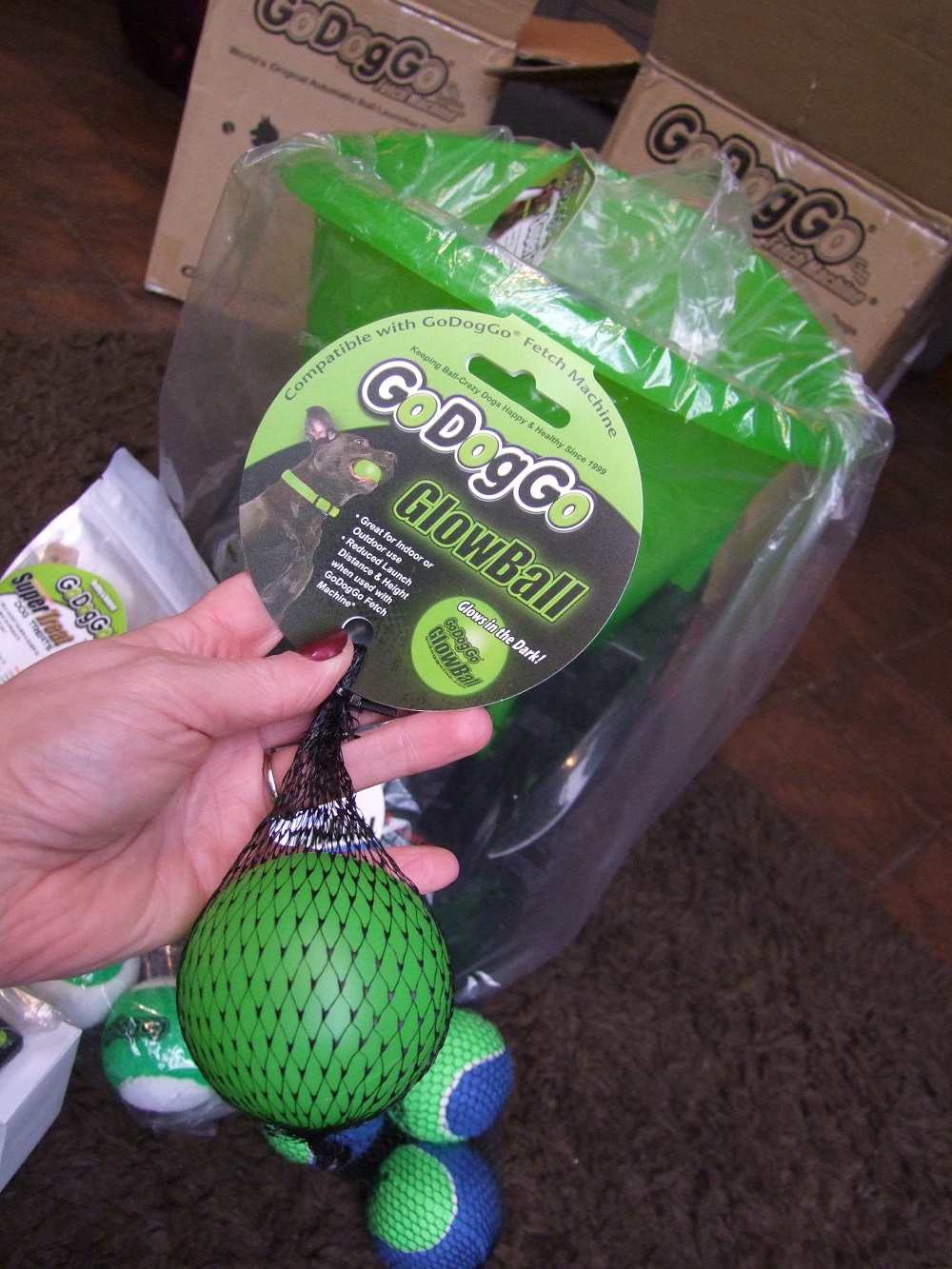 We even received a bag of healthy salmon SuperTreats, which are ideal to use to train your dog to get used to the certain aspects of using the machine - such as returning to the ball to the bucket then standing back.

Now fully unboxed we were ready for inspection. 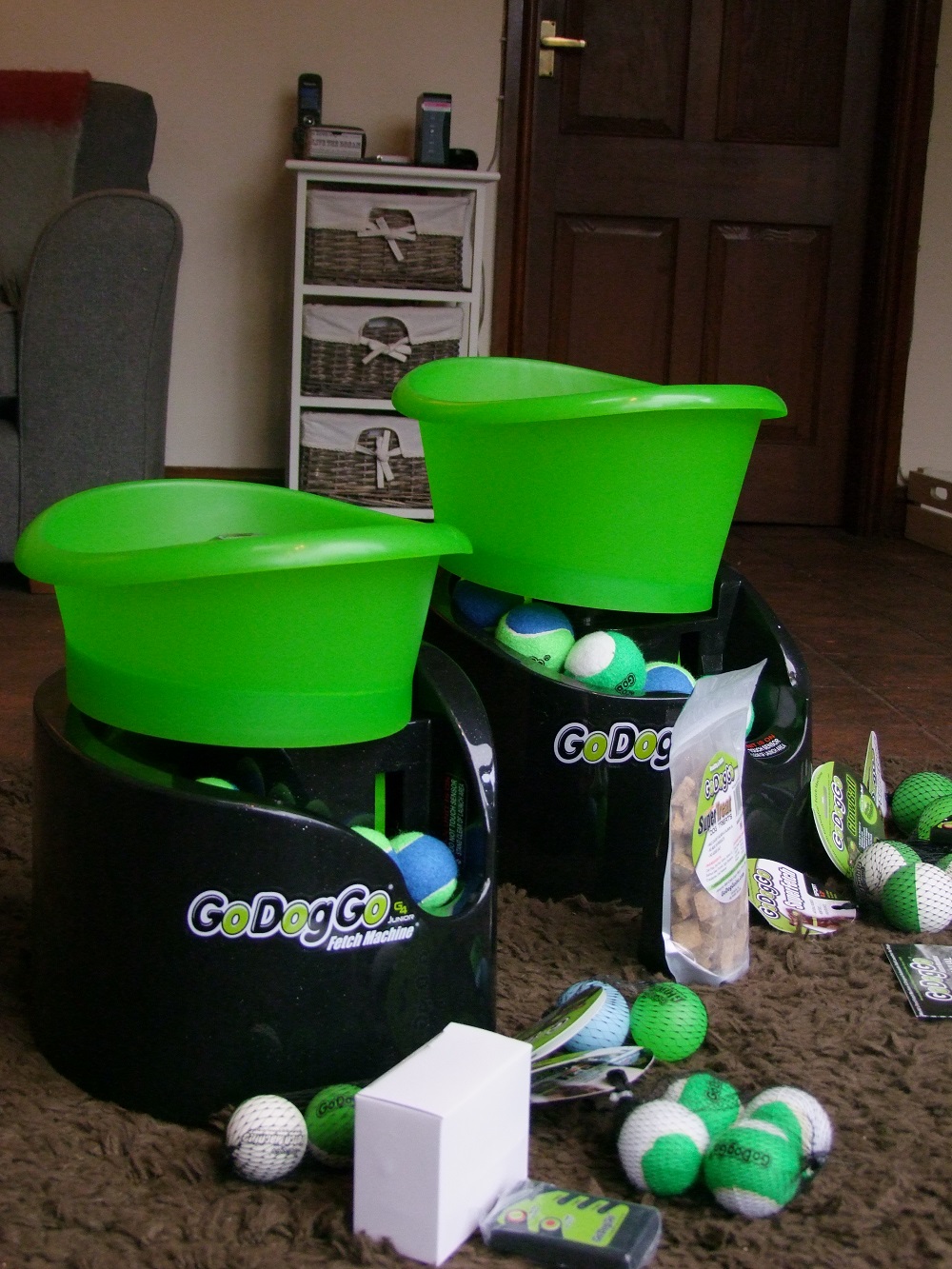 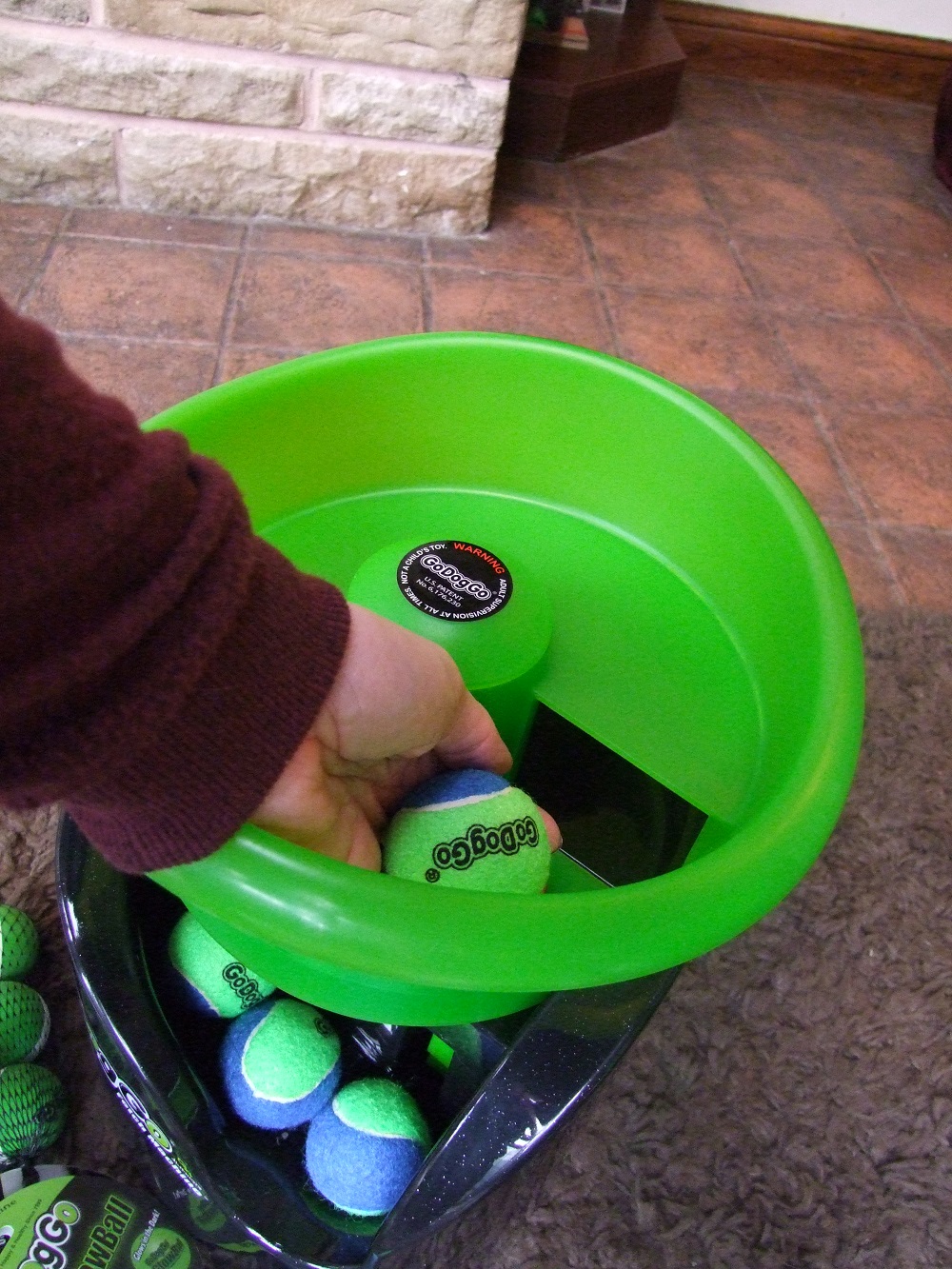 First up was Mia who had watched me placing the balls in, as above. 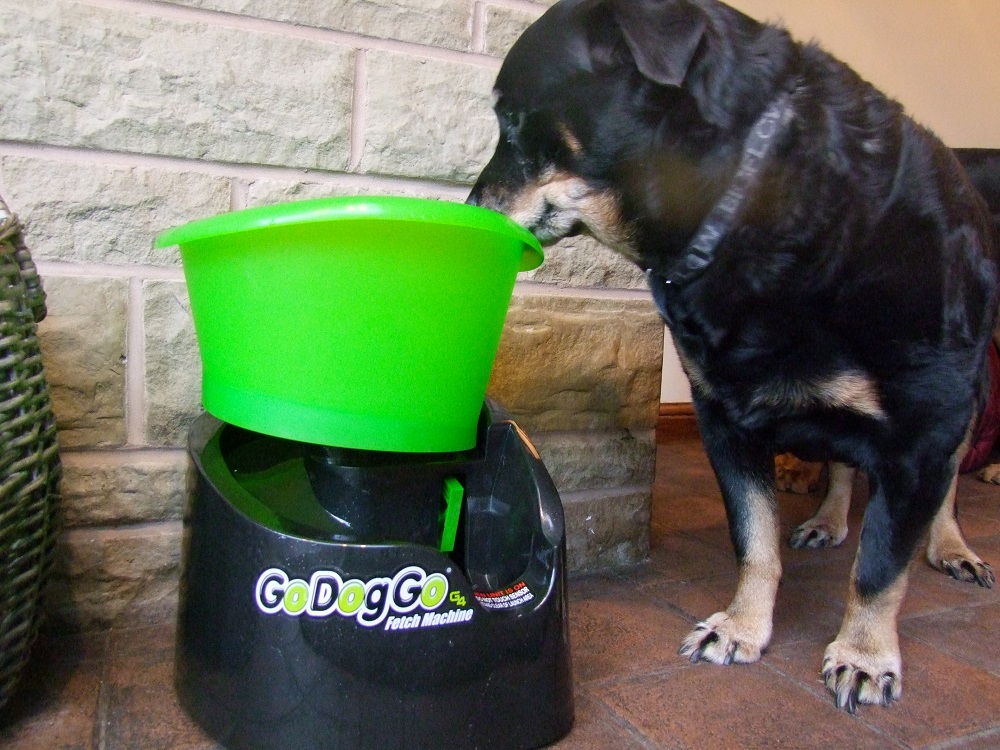 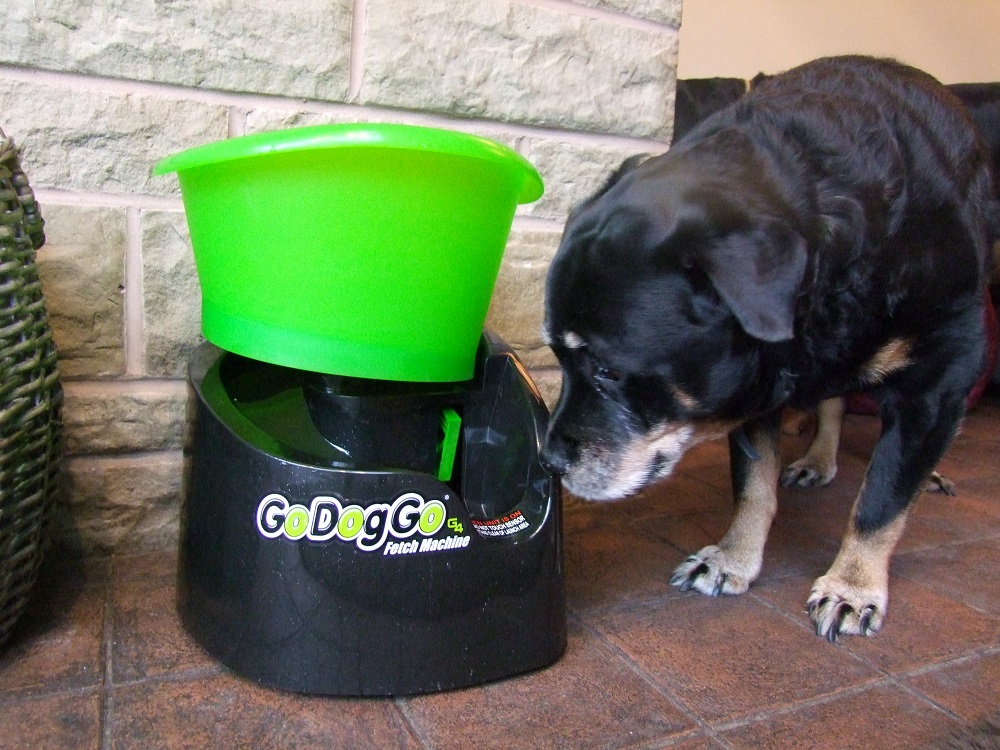 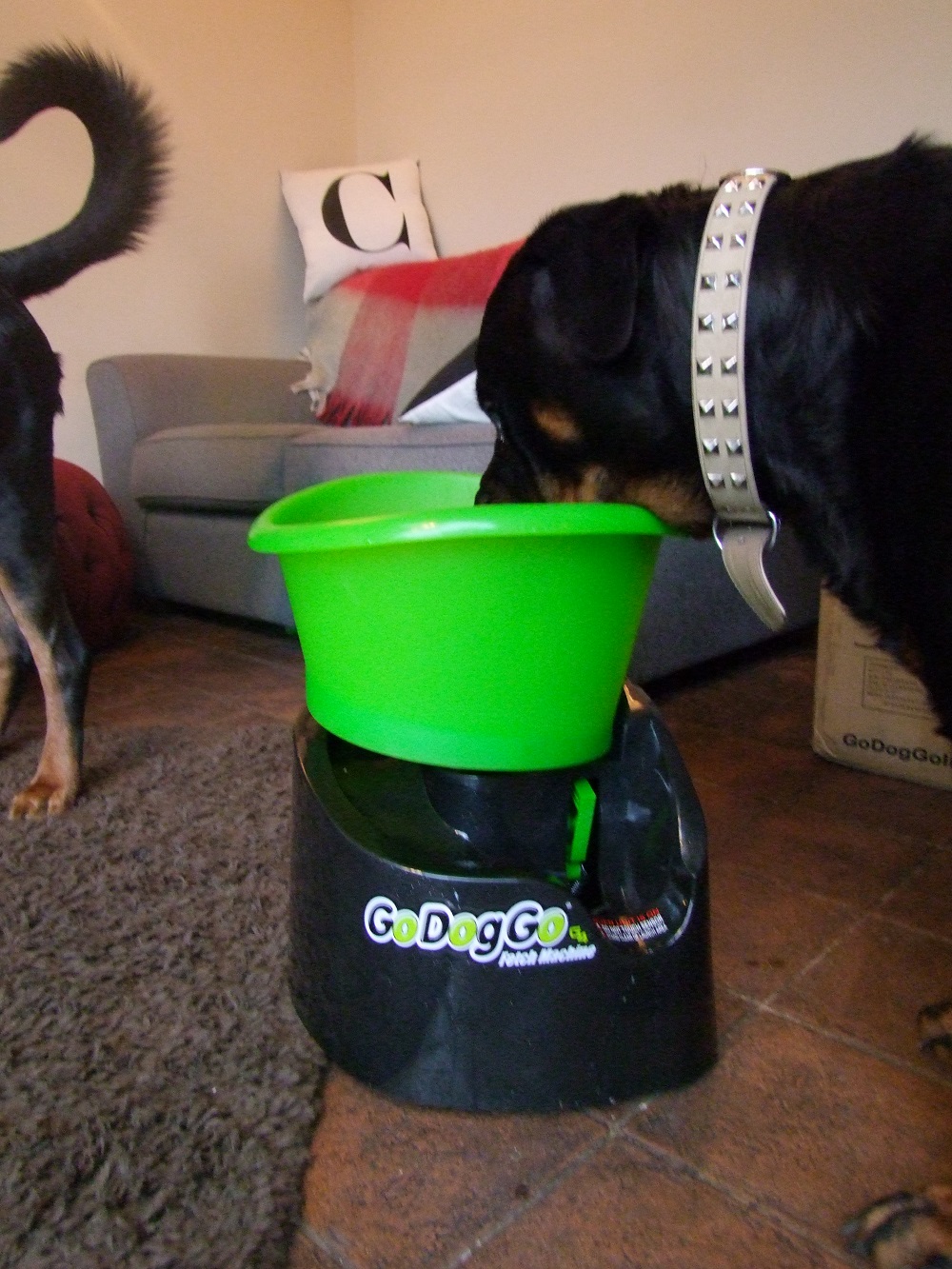 Being winter in the UK, we had to choose when we took it outdoors to test quite carefully as dry days are few and far between.

Here's how our magnificent five dogs got on.

The first three to tango with the GoDogGo standard G4 were Danny, Mia and Christopher. 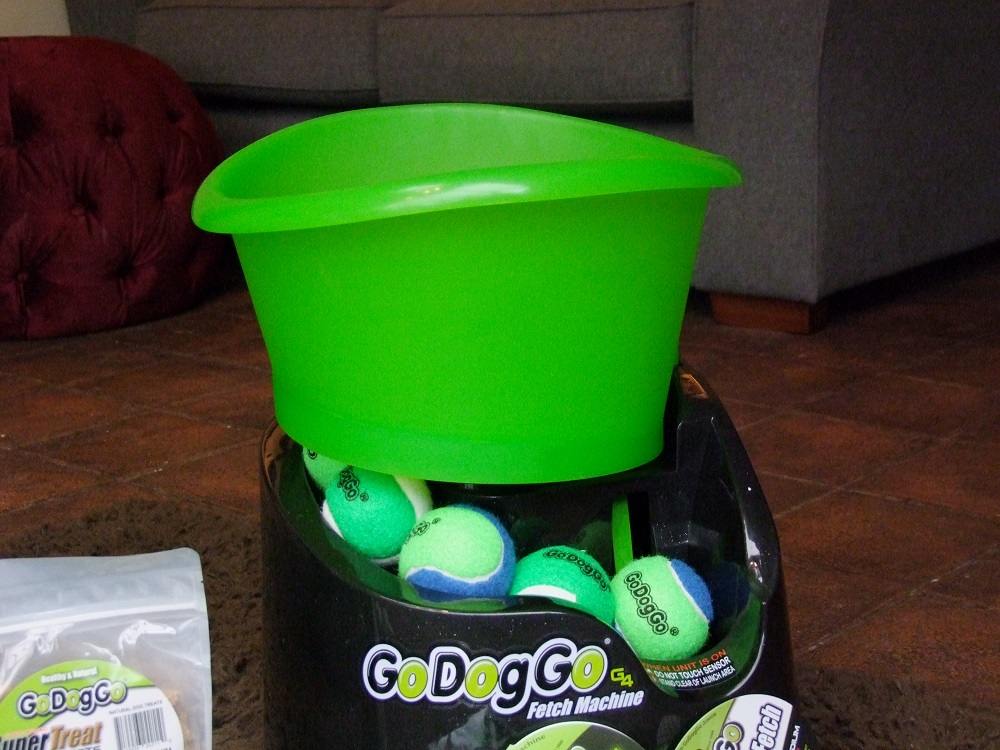 The first thing we did is discover which height would best suit. Adjusting the lever underneath, we saw we could select low, medium or high. Being outdoors, initially we opted for medium just to see quite how far that would reach. 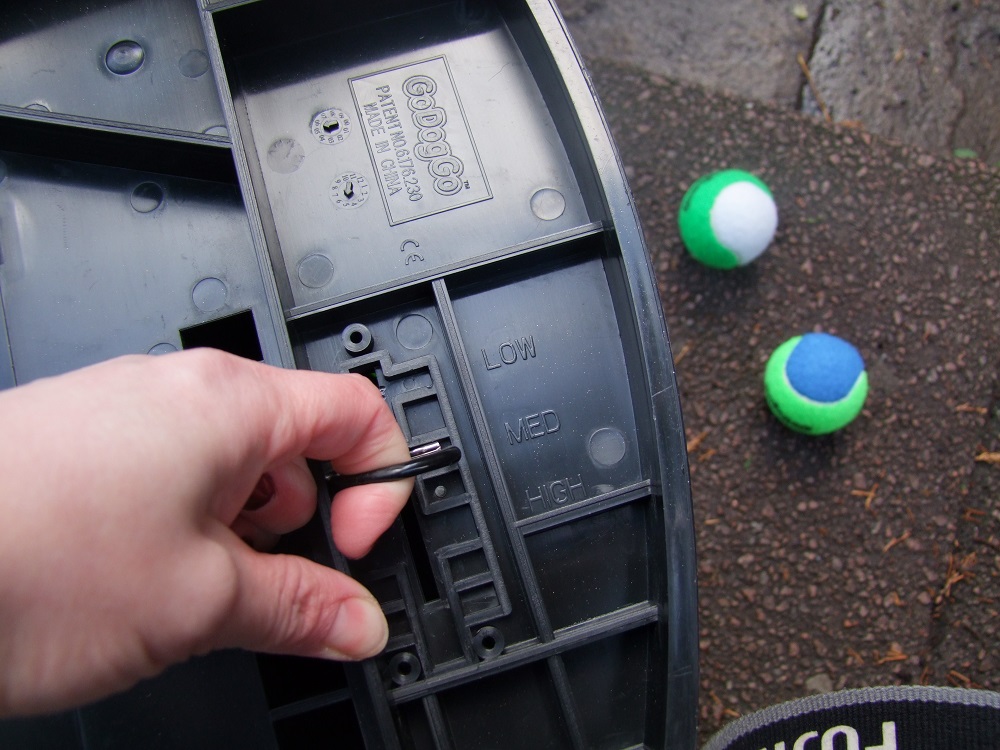 We also chose to set the time for each ball's release manually rather than using the handy little remote which comes with the machine while we were all still getting used to how it works and how Christopher, Danny and Mia would react. 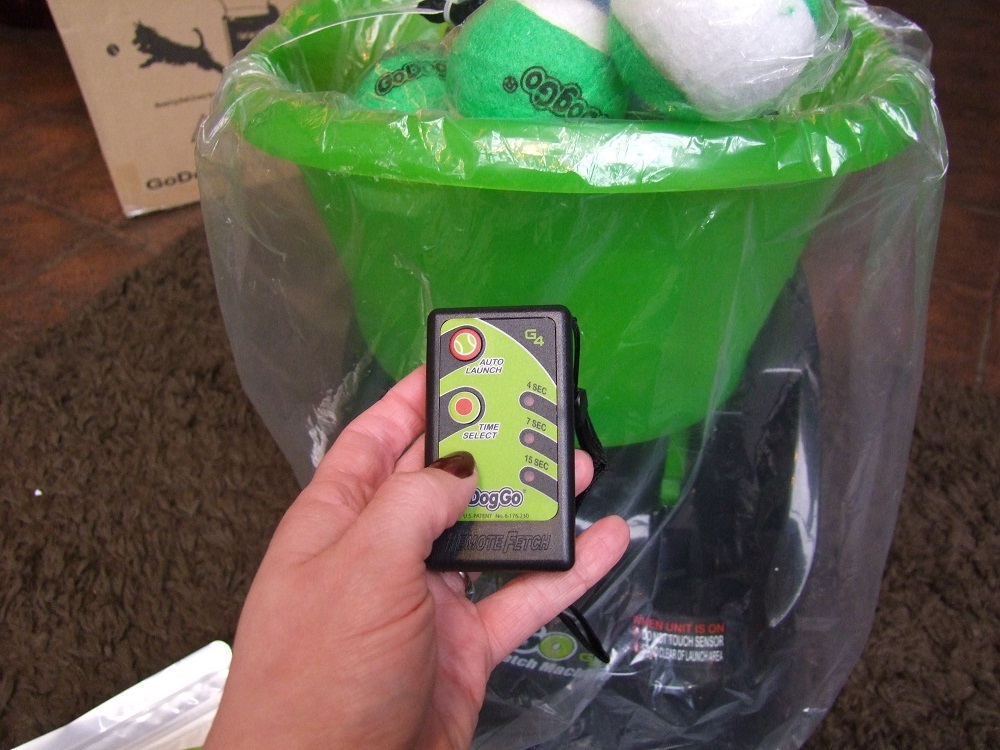 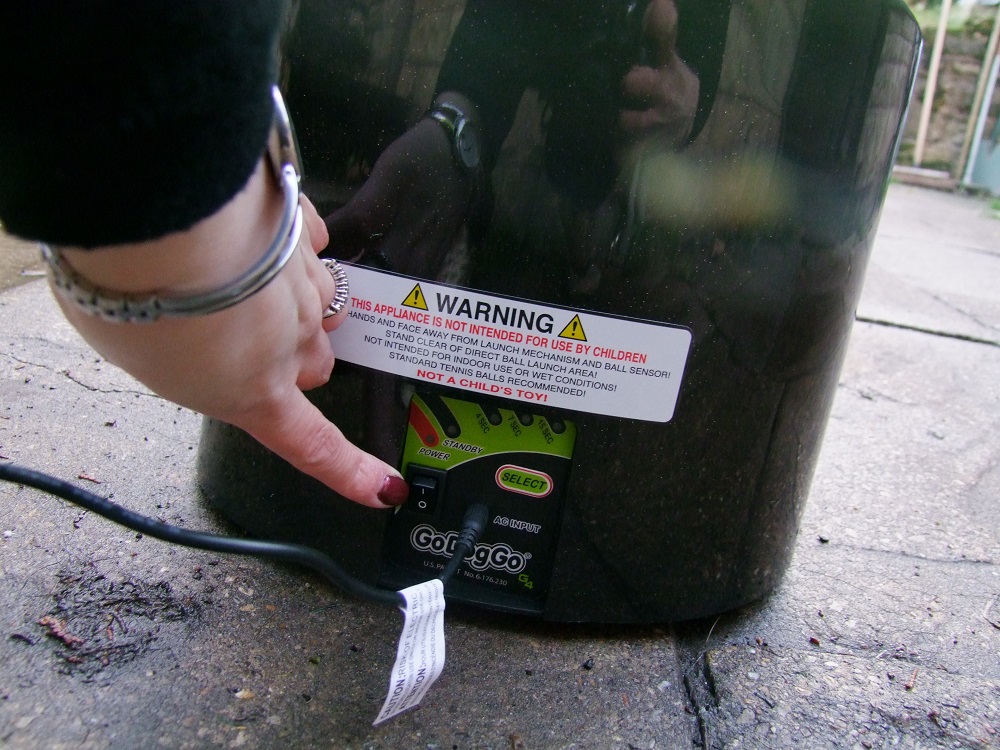 We knew these three amigos loved tennis balls, we knew they saw them as a reward, but what we didn't know is if, or how, their competitive nature would get in the middle of their review and so with that in mind, we selected 15 second intervals between the first three tennis balls giving each dog the chance to grab their own.

The balls were launched out of the machine with a quite loud 'thud' sound each time another was released. 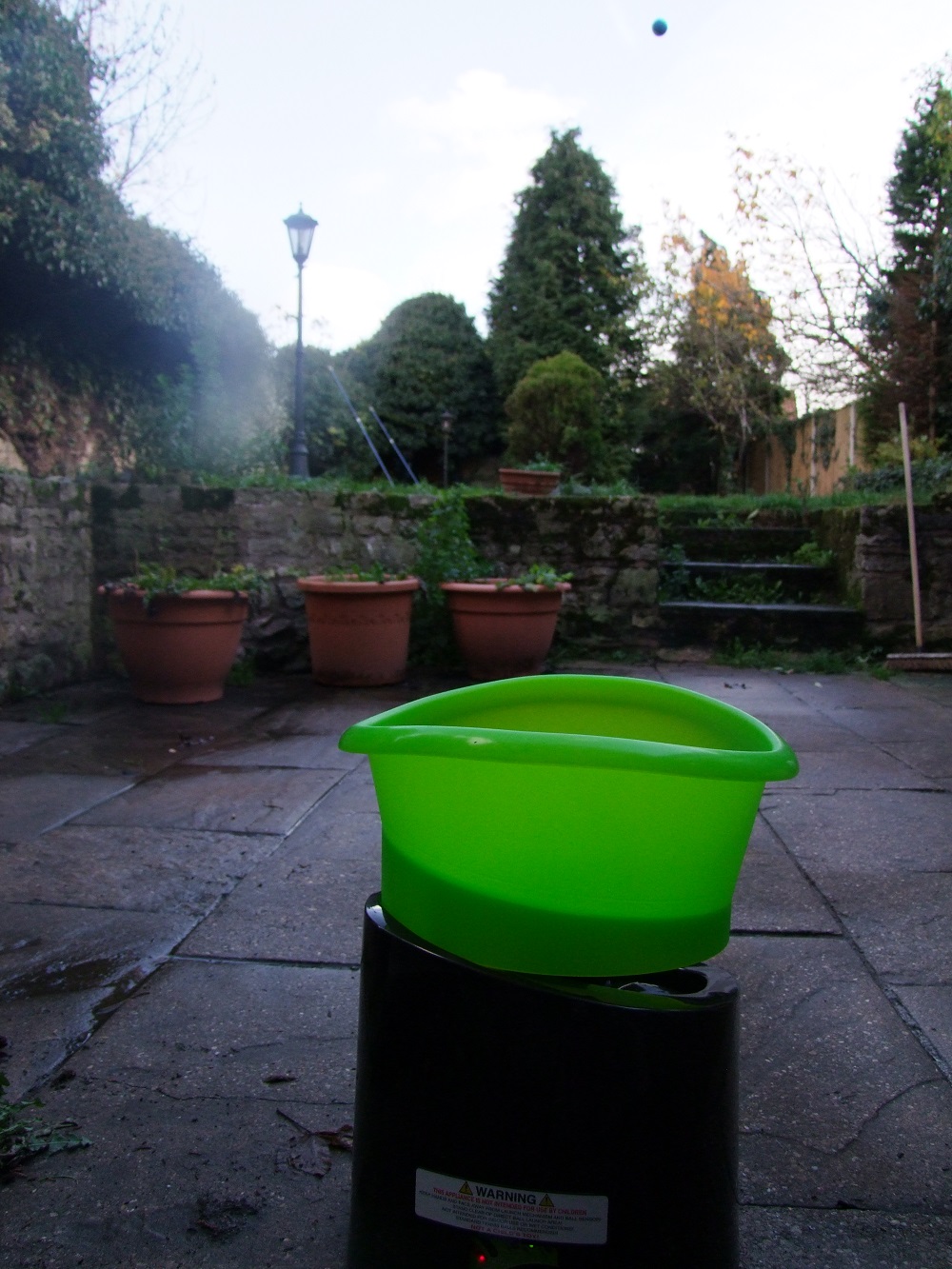 It didn't take us long to discover that even with a launcher ensuring each dog was given a ball quite quickly in succession, they thrived on each other being there watching them. The thrill of stealing another's ball was all consuming. 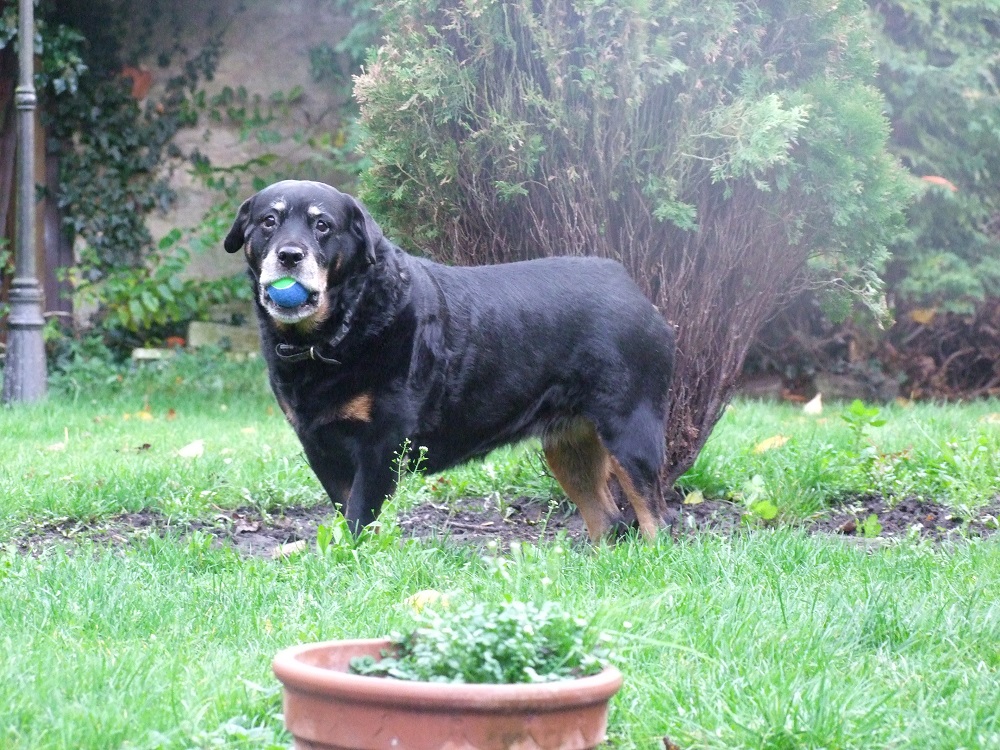 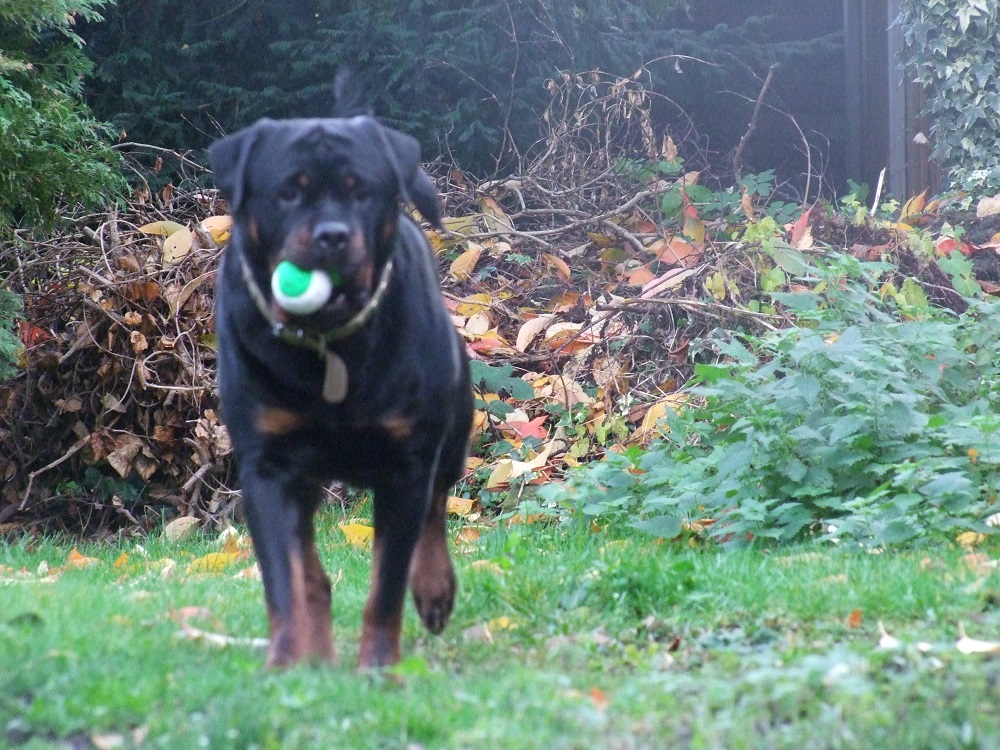 It's because of this that they loved the machine but wouldn't give it time to launch multiple balls without trying to steal another from the bucket. 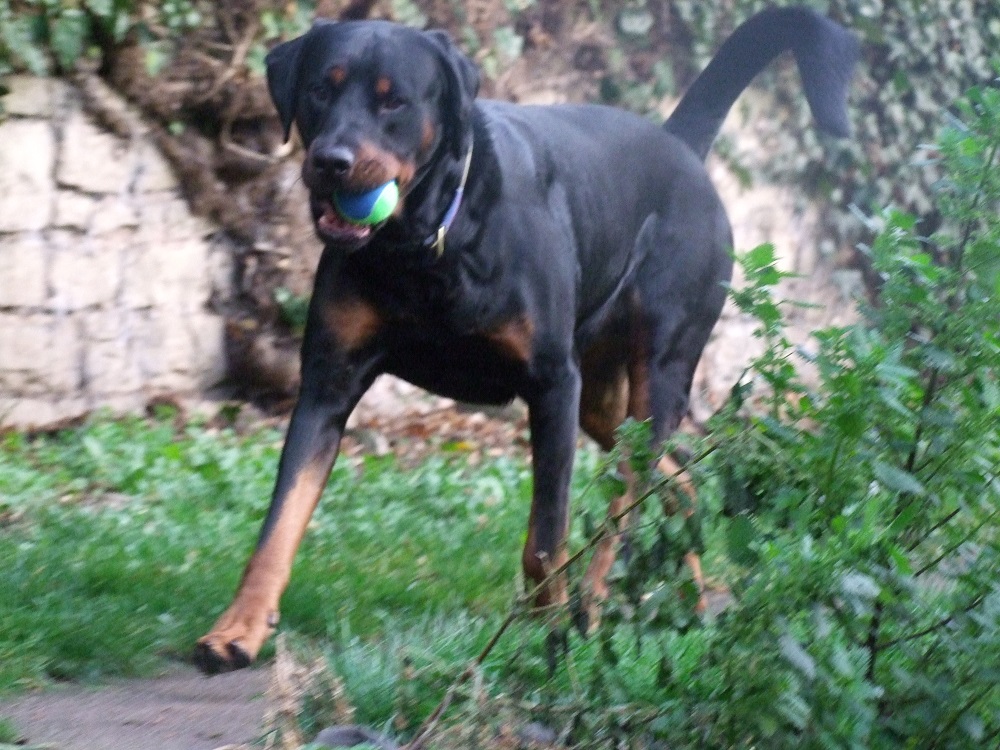 This wasn't the machine's fault at all, it's our dogs, but wasn't ideal because if we included three balls in the machine to give each dog their own ball that meant sending a ball every 4, 7 or 15 seconds automatically and we knew that each dog wouldn't wait their turn at a distance. 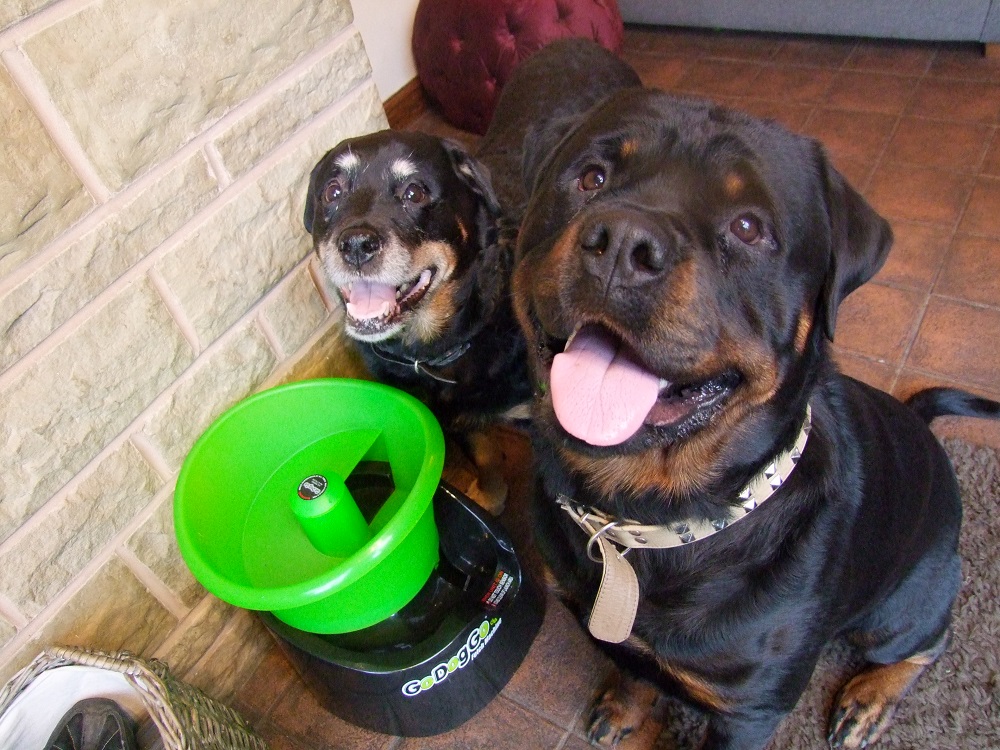 Instead they would be front and centre in front of the machine and no amount of convincing would work to get them to move because of the competition factor with the others of wanting to have what the other has, plus their own ball. 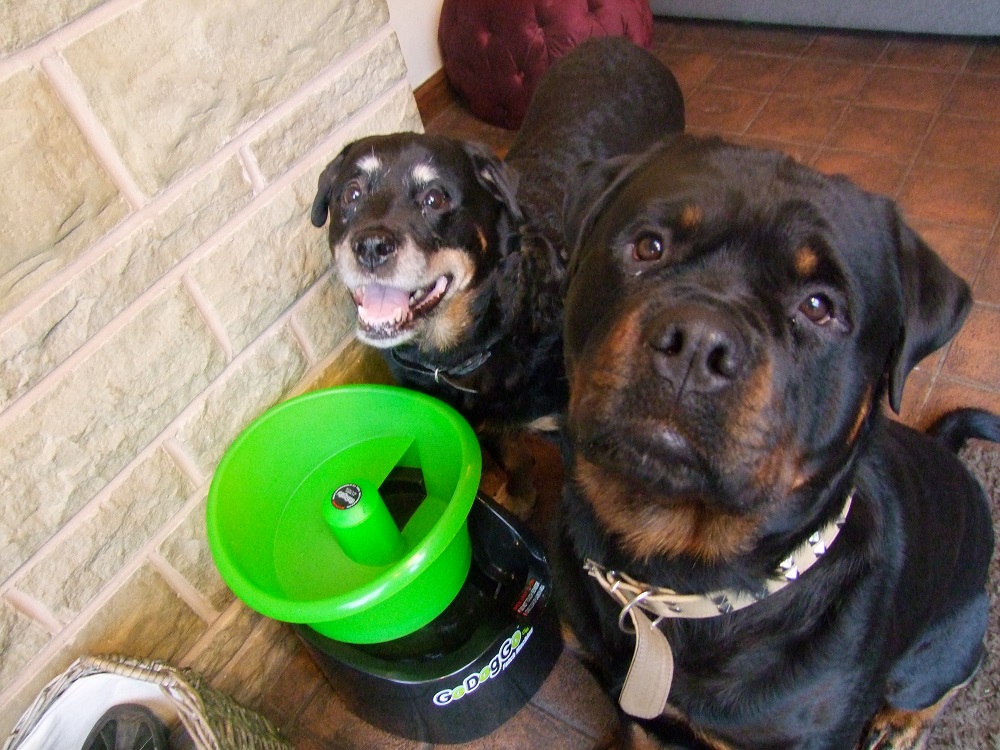 And so with this in mind for balance and an extra viewpoint, we brought two of our more sensible (less greedy) review pals, Charlie and Bruce, on board for the standard G4 machine. Charlie would be our main reviewer because although Bruce loves to have fun when it comes to anything ball related, he mainly plays while Charlie does the hard work of chasing the ball.

With winter in full swing, the dark nights and damp weather made it difficult to get a clear patch outside to test. Luckily, it does work indoors when plugged into the socket if you're happy to run indoors and have the height. After a quick check of the space and distance needed, they were ready to go.

Charlie loved the machine from his first use, he didn't need to be told to move back (sensible boy), he just knew, maybe it's the fact he's a Labrador. Excitedly waiting at a safe distance, he was even more thrilled that multiple balls were coming his way! Normally a dog who has to be enticed to give up a tennis ball with the sight of another, this is the perfect gadget for him.

Even Bruce, who doesn't normally join in got caught up in the excitement of it all, as the video below shows which was a real hit with the boys owners.

Keep an eye on our Facebook page for more photos of their outdoor adventures using the remote control with the GoDogGo Fetch Machine coming soon...

As a smaller dog, Oreo received the JUNIOR to review and boy did he. His owner, Craig wanted to take advantage of the review to train Oreo. Here's his diary to explain more.

Amazing! Our GoDogGo Fetch Machine has arrived. I was really excited to try because a friend had one and I saw it in action with his Border Collie. Part of the reason I really wanted to try it out is because it'll be a great way for us to play with Oreo and if we're busy with work we can keep an eye on him while he plays.

When opening up the box to my relief it was totally assembled, all I had to do was read the quick fire instructions. It seemed foolproof. Oreo even got up out of his basket to have a look.

Coming to K9 Magazine from the US, we had to order a plug adaptor to fit a UK socket so while we were waiting for its arrival I decided to read up on how to best train Oreo for using the machine.

The plug adaptor has arrived and we finally have a sunny day to set it up outside. I take a few minutes to re-read the instructions to set it up scanning the training notes to get Oreo used to it once again. Our plan is to train him to: fetch the ball after it's launched, return to the bucket and then move back so he stands clear of the launch area.

We begin setting up outside and I place the balls in the green bucket that feeds the balls into the launch area of the machine. The small remote is a great idea to set the time to auto launch at either 4, 7 or 15 second intervals or there's an 'instant' button for immediate ball launch.

Oreo has walked over very curious and nervous and quickly runs and grabs a ball from the GoDogGo JUNIOR before running off. He doesn't want to play today. I think to myself we'll try again tomorrow - I will not be defeated, I know he'll really get a lot of fun out of it, as will we, once he's got the hang of how it all works.

We set up the GoDogGo automatic tennis ball thrower and Oreo goes to sit on the grass. He hears the whirring noise and waits for the ball to be thrown. He grabs it from the air. Yes! He's got it! But, oh, wait, he doesn't return the ball. I call out 'put the ball in the basket' but he runs off to chew it instead. Naughty dog.

Oreo sits on the grass waiting for the balls to come. He grabs the first ball, then runs for a second before bringing it right up to basket. Unfortunately, he doesn't drop it in and just runs off again. We do this a few times, each time he grabs the ball and runs off.

Oreo runs straight up to the GoDogGo, grabs the ball from the machine and runs off into the corner ready to chew the ball until he breaks it apart. He has no interest in running after the balls today. Naughty dog.

As a Border Terrier (I'm blaming the breed, not my training skills) he has a strong, independent mind of his own but he is definitely improving and learning what he needs to do to get the ball by bringing it back - or not stealing from the bucket - before it's launched.

Oreo definitely loves to grab, run and destroy the balls before it shoots out them out. I was close so close on Day 3. I would recommend the GoDogGo Fetch Machine to owners of a Labrador or Border Collie, breeds who specifically love repeat actions or who love to fetch and learn. I love it and will keep going with Oreo's training.

Thanks once again to GoDogGo for sending their standard G4 and JUNIOR machines to K9 Magazine, if you google search you will find many more reviews, videos and owners stories.

Treat Your Dog to a GoDogGo Automatic Tennis Ball Thrower