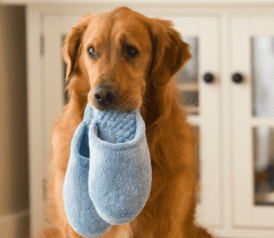 "Dog fetch". It's a classic. A great activity, training your dog to fetch.

The "Fetch" command, even if you have a breed that is not a retriever, fetching is a great thing for the dog to learn. It is not only an easy and pleasant way to exercise a dog but is also the basis for many other tasks the dog can learn in the future such as carrying the newspaper.

Training a Dog to Retrieve is Easy!

Teaching retrieving is easy and fun if you do not expect perfect performance the first few times. Remind yourself that this will not come naturally to all pups at first, especially the very independent and the very shy pups. You just have to keep at it. The rewards are great. The younger you begin teaching this, the easier it will be.

Tie a sock or small cloth (white or light colour) in a knot. Dangle it excitingly in front of the pup's mouth. Encourage him if he starts to lick it or opens his mouth. Toss the sock a couple of feet in front of the pup. If he goes to it and sniffs, praise him like crazy! If he picks it up, attract his attention to come back to you by calling him, clapping your hands, patting the floor or whatever will entice him to return. Do not overdo this exercise. Two or three retrieves at a time is plenty. If he is not too excited about it, once is enough.

Gradually increase the length of your throw. If the pup reaches the point where he picks it up and runs away, put a cord or string on his collar and gently guide him back to you. Some people prefer using a small ball. The movement is a good attention-getter. Just be sure that you do not throw the ball too far to get the pup's attention.

Experts suggest using a brightly coloured ball and rolling it off his nose from the top of his head. If the movement of the ball does not interest the pup, face him close to a wall so that the ball will roll back out towards the pup again.

To begin, select a toy that your puppy has shown a particular liking for, then seat yourself upon the floor. This puts you down closer to the puppy's level and, among other things, will help to convey the “game” atmosphere.

Make sure that the puppy's leash is attached and that you are holding the other end. Toss the toy up and down for a few seconds, just enough to attract the pup's attention. Then, toss it out a few feet away from you encouraging the puppy to retrieve it. You can encourage him with things like “Come on boy... pick it up! You can do it! C'moooon boy! Good doggie!”.

There's enough verbiage there to make sure not a single word sticks on that chalkboard; but your tone of voice, together with your enthusiasm are the prime considerations here. If the puppy goes to the object and shows any interest in it at all, that's grounds for praise and further encouragement. If he picks up the toy and brings it back to you, really pour on the praise and toss it out again.

Try to get four such retrievals into your first ten-minute play session. Then, remove the leash and end the game with a tidbit – a cookie or other food reinforcement. Why the tidbit? Why not just praise? Remember, your puppy is now nine weeks old, and praise just hasn't had time to become that big of a thing. Sure, it's nice at this point in life, but the food reward is nicer.

Teaching Your Dog To Fetch: A Simple Trick For Success

Training your dog to learn new tricks stimulates his mind, increases its ability to analyse information, all the while giving you more knowledge of how your dog's brain works. In addition, teaching him how to do tricks is a fun way to spend quality time with your dog, which then creates a closer bond between you and your pet.

Did you know that your dog is capable of learning hundreds of words as long as you apply patience and consistent training? For example, in the following trick called “find the object”, your dog will be learning how to identify a toy or a particular item by its name from a group of items. It's a very entertaining game that will widen his vocabulary and activate his thinking process.

Teaching Your Dog To “Find The Object”

To start, line up several objects on the floor or a low table and ask your dog to find a specific one. Start with an item that he's already familiar with, such as his food dish or his favourite toy, whatever that may be. Place the object in an obvious area right next to two other unfamiliar, non-fascinating objects, such as a book or a small piece of wood.

Then, point to all the items on the floor or the table and command your dog to “find the dish”. As soon as he picks up the right object, praise him by petting his head and perhaps giving him a treat. If he knows how to fetch, use the command and have him bring the dish and lay it down next to you.

Do not put the treat on the dish that he brought you because that will encourage him to only pick the dish from the group of objects that you laid out.

Next, place another item on the pile, one whose name is also familiar to your dog (such as a ball). Tell him to find that item and then go back and forth between the second object (the ball) and the dish.

Don't scold him if he picks the wrong item, and don't acknowledge it, either. Just keep saying the command “find the object”. Once he has master the game, do a more advanced variation of the game, where objects are placed in different locations and then telling him to find it.

All you need is a ball and a wall. Bounce the ball against the wall (a soft ball for inside the house) and say "Fetch" as your puppy chases after it. The purpose of saying "Fetch" is to get her to identify the word with her action. After a certain number of repetitions, she will associate the word Fetch with the act of chasing after the ball. This is an easy way to start creating a pattern in your puppy's mind.

Other commands you can use during this game are "Take it," "Drop it," and "Leave it." At the moment she puts the ball inside her mouth, say "Take it." When she brings and drops the ball for you, say "Drop it." If she doesn't drop the ball, then make her drop the ball by substituting another motivator, such as a treat, so that she will drop the ball to get at the treat - I call this a fair exchange. Say "Drop it"

Of course, in the beginning, she won't connect her actions with the words; she is too busy just having fun. But by playing this game for five minutes a day for a week or two, she will start associating the words with the action.

What I like about the Fetch game, or any game for that matter, is that pups will never run away from you when they are playing. She will always bring the toy back to you because she knows the game will continue. And through this you are building trust.

If your dog gets distracted by another toy and picks that up, don't stop her. Just say "Take it" when she puts another toy in her mouth, and use that toy to play Fetch. You are allowing her fun to continue. Never force a dog, young or old, to play a game when she has lost interest. Losing interest does not show a lack of intelligence in your dog. She is just naturally being an inquisitive canine.

Teaching A Dog To Fetch The Remote Control

OK lazy bones, we've all been there. We sit down on a Sunday afternoon in readiness to veg-out in front of the TV, only to realise we've left the remote control on the coffee table or on the sofa at the other end of the room. The other end of the room, that's MILES away! So there's only one thing for it, we need our canine helper to do our walking and retrieving for us. Oh what a lazy bunch we are.

Here's how you teach your dog to fetch the TV remote:

1. Using the normal techniques of teaching the dog fetch, we associate our object (TV remote) with a word (i.e. 'remote')

2. We encourage the dog to pick up the remote and use the word repeatedly "remote".

3. When the dog picks up the remote we praise lavishly.

4. We place the remote a short distance in front of the dog and say "remote" (not fetch). A click of the fingers helps.

5. We extend the distance between the placement of the remote and our dog and again give the word "remote".

6. Once the dog has cottoned on to the association between the word "remote" and the object in question, we move on to very slightly hiding the remote, perhaps around a corner - but still within easy finding distance. Our objective is for the dog to succeed.

7. Once step six is complete we can start to get fancy. Place the remote underneath something like a bed or a chair. We only want the dog to work a little bit harder, but still to succeed.

8. Having accomplished step seven the next step is to place the remote slightly above the dog's nose level, perhaps on top of a chair that the dog can easily reach.

9. We're almost done. Once you're complete happy that the dog is fully understanding the connection between the word "remote" and the exercise in retrieving the TV remote control, we can start to properly hide the remote. Help the dog by giving them audible encouragement and walk with them to point them in the right direction.

Having done these steps, you'll find you can not only be a lazy bones whenever you sit down and have forgotten to bring the remote, you can actually engage the dog in a mentally stimulating game that has a reward associated with it (for dog and owner).

Video: Teaching a Dog to Fetch The TV Remote