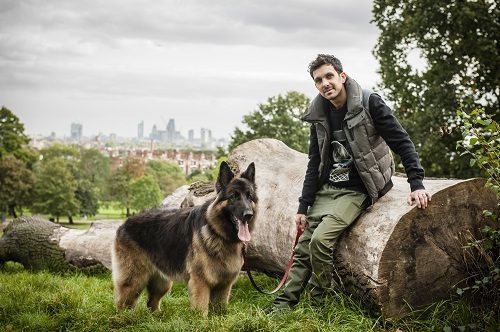 Dynamo, real name Stephen Frayne, was first on our TV screens six years ago when he made an appearance on Channel 4's 'Richard & Judy' show which was followed by a special episode of 'Dynamo's Estate of Mind' on the same channel.

Since then Dynamo has brought magic and illusions to the masses fascinating us with his every move, combined with hearing about his upbringing and family life with his treasured Nan – it's clear to see although he's very much the stage man, there's much more than meets the eye with this Bradford boy.

K9 Magazine's Kim O'Meara caught up with Dynamo as he introduces us to his beloved dog Bessie while planning his 2015 live UK tour.

Bessie is a seven year old German Shepherd. My wife has had her since she was a puppy, and I've had her since I've had my wife (for want of a better expression) so she's been mine for four years.

She's an amazing dog, I've always loved dogs so when I first went out with my missus and she told me she had a dog I was really pleased. My wife's job means she can work from home so someone's always there with Bessie.

We have a photo which is of me in bed and her lying on top of me and it's like 'Where's Wally?' but 'Where's Dynamo?' instead because all you can see is my head (laughs).

Bessie's a brilliant dog, she's so soft and has such an expressive face. She's a really playful, big girl and she's so placid. If we're out walking as well, she'll never go too far. She likes to keep an eye on you.

She has her own following as well and people know her by name. I have about 8 million people following me on Twitter, Instagram and Facebook and sometimes if a friend has taken her for a walk I'll have someone tweet a photo to me saying they've had their photo taken with her.

Did you grow up with animals at home?

Growing up we had a family dog, a Jack Russell Terrier called Mitzi, but when I left home she stayed with the family. When I was 19, I left to go travelling around America to hone my magician skills so when I came back I could start my career. I went to New Orleans to see the street magicians, and of course Las Vegas.

I was able to fund my expeditions through working for my Nana Lynne for a year. She has 19 award winning Golden Retrievers which she showed, so I helped by grooming them and looking after them. I also did magic tricks at the after parties of the dog shows. One of my favourite dogs of hers was called Tomba, he was just a puppy when I was there and he's won everything now and is a Master. He's even been in TV adverts.

A huge chapter in your life has now finished as Watch recently showed the very last episode of 'Dynamo: Magician Impossible' but as one door closes another opens with your UK tour coming to life next year. What can readers expect to see coming along to one of your shows?

For everyone who's ever watched the TV show, it's a chance to see it first hand. For those who don't necessarily believe, come and see it 'seeing is believing'.

I'm really looking forward to getting on the road. It's a way for me to say thank you to everyone for supporting me over the years.

Will Bessie also be on tour with you (whether making an on stage appearance or behind the scenes)?

(Laughs) Funnily enough our tour rider includes a pet friendly hotel so we can take her with us. I'm also having a trailer so she can be with us at the venue and I'm looking into getting her a pet passport so she can travel abroad with us.

Your magic has fascinated everyone we've spoken to when we've excitedly told them we're featuring you and Bessie this issue. What have been the stand out moments for you in your career so far?

I think people would say walking on the River Thames if you asked them.

For me, it's been a crazy journey over the last 12 years. My top three moments are probably levitating above the Shard in London, walking down a building and walking on the River Thames. They were all iconic moments.

I remember growing up and talking to my Grandpa about magic and speaking about all of these ideas, so I wouldn't be here if it weren't for him and The Prince's Trust.

Also, it was a proper career highlight to be able to do something with Bessie as well. We really enjoyed your photoshoot. It was a lot of fun, I think she thinks she's a model now (laughs).

Ah, thank you! So all of these iconic moments are ideas you and your Grandpa spoke about?

Yes, everything I've done is because of him. He really got me into magic.

I was picked on as a kid growing up and close to our estate there was a dam which they used to put me in. I never learnt to swim until I was 14, so you can imagine what that was like. I remember thinking at the time that if I could walk on the water... – and then I did, the most famous river in the country, the River Thames.

You once turned lottery tickets into cash for Comic Relief and after the finale of your latest TV show said 'Magic isn't about deception or fakery, it's about doing something that no one thought was possible.'

Wearing another hat on behalf of our dog adoption site (www.dogsblog.com), October was National Dog Adoption Month here in the UK. With over 100,000 dogs in rescues across the UK and more dogs being abandoned year on year – what would you do to help change people's perceptions about dogs in rescue centres (changing the perception from damaged goods, for example, or to think differently) and encourage them to consider adopting a dog.

Bessie isn't from a rescue shelter, she's been in the family for years. But we've discussed potentially getting another dog and the first place we'd head to would be a rescue. There are so many unloved and badly treated animals in these places it only seems right to give them a chance.

And finally, this is always a tough question and often requires a fair degree of thinking time but….If Bessie had the ability to speak and answer one question and one question only, what would you ask her and what do you think that she would say?

If Bessie could speak she would sound like Scooby Doo - we say it all the time. She tilts her head and makes that Scooby confused noise, it's really silly.

We always think to ourselves what are you thinking about Bessie because she sometimes stares at us with this funny expression we can't figure out.

So we'll often ask her 'what are you thinking Bess???' and we chuckle to ourselves imagining she would say something really wise and solemn in response.

Bessie's a really impressive dog to look at and communicate with so her saying something dignified just seems about right, but in a Scooby Doo voice. (Laughs) It's quite funny thinking about it.

Dynamo Was Speaking With Kim O'Meara

Find out more about Dynamo's 2015 UK tour at www.dynamomagician.com

Talking Point: British Breeds in Peril? Why You Need to Do....Absolutely NOTHING! Lifestyle: Interview with Dynamo K9 Health: Dogs & Rabies - How Much...

It's that time of year again, the festive season is upon us. Whether you enjoy the season for the build up, or presents (who's...

As more pet owners choose to holiday at home and almost half of dog owners choosing to take treat their pet to a break...

A View from Dominica

Located between its two French neighbours, Guadeloupe and Martinique, the island of Dominica (not to be confused with the Dominican Republic) is a lush...