Tucked away in the far northeast of India in the state of Assam trouble is brewing. A rare, one-horned Indian rhino has wandered from the relative protection of Kaziranga National Park; forced to seek higher ground by the monsoon that has swollen the mighty Brahmaputra River to bursting point. The rhino lumbers toward the road that borders the park to the south - a route that rhino have been using to escape the annual floods for centuries, and the rhino poachers know it.

For decades, the demand for rhino horn has been driving the species toward the brink of extinction. Despite it being illegal under international law to kill a rhino it does not stop the poachers, or the nexus of wildlife traffickers they sell to, from breaking the directive laid down in 1977. With a single rhino horn reaching up to £48,000 on the black market it’s a risk they are willing to take. 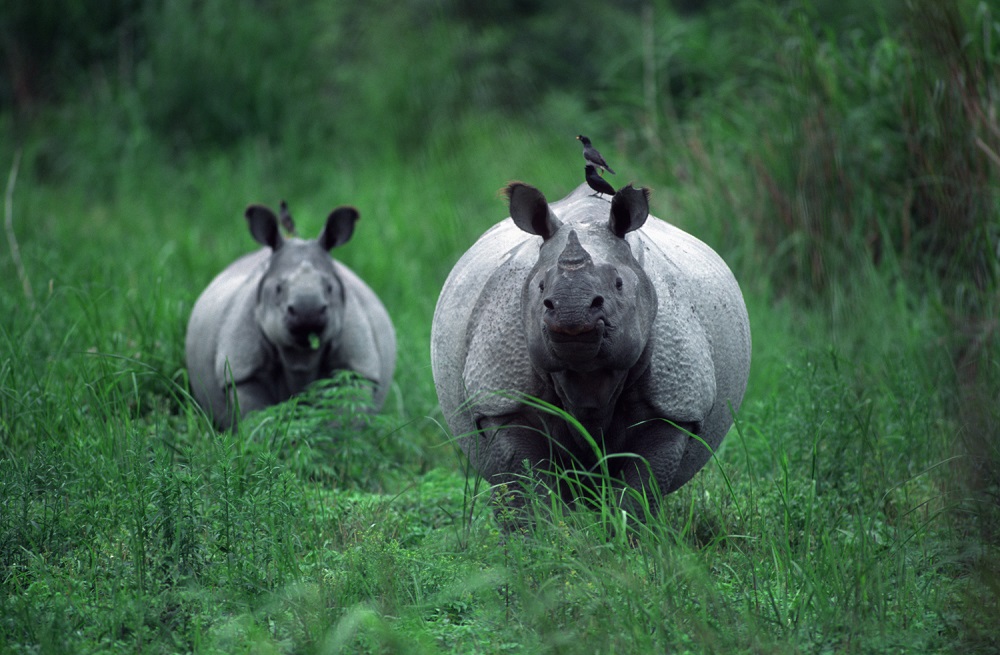 Since 1994, UK-based wildlife charity, the David Shepherd Wildlife Foundation has been working to prevent the demise of the rhino in Assam by funding park-protection and undercover investigations, plus training and equipment for park rangers and community defence teams.

Successful to a degree – rhino numbers have risen by 27% to around 2,500 since 2006 – something was still missing from the fight against wildlife crime; a strong, visual deterrent and the collection of key evidence required to successfully prosecute the poachers they caught. 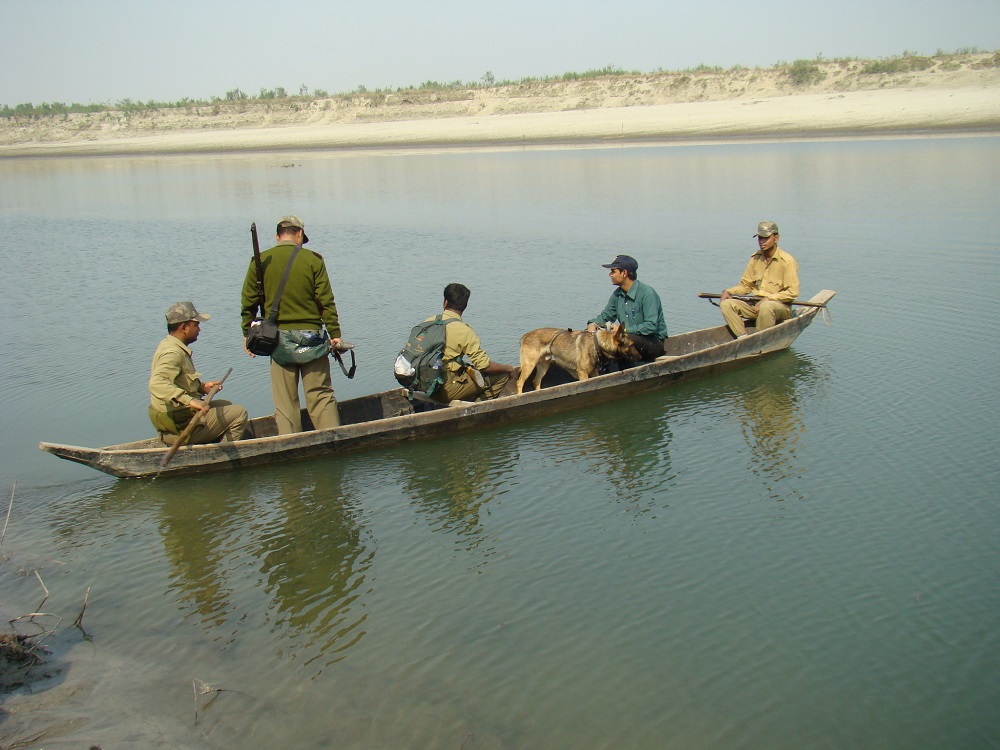 "Dogs were beginning to be used across rhino-bearing areas in Africa to help track down poachers and they were starting to get results. There seemed no reason why we couldn’t run similar programmes in Assam," says Dr Bibhab Talukdar chair of the IUCN Asian Rhino Specialist Group and Secretary General of Indian NGO Aaranyak. "I approached one of our key funders, the David Shepherd Wildlife Foundation, and in 2011 the anti-poaching dog squad was formed."

FACT BOX: All you need to know about the Indian Rhino

Living unicorns, the Indian one-horned rhino – rhinoceros unicornis – was once found across the entire northern part of India.

Hunted for sport and killed as pests, the species was pushed close to extinction in the early 20th century and in 1975 there were believed to be only 600 left in the wild. Rigorous conservation efforts have helped reverse the trend and there are now believed to be c.2,500 in Kaziranga National Park and around 3,500 across northern India and Nepal. 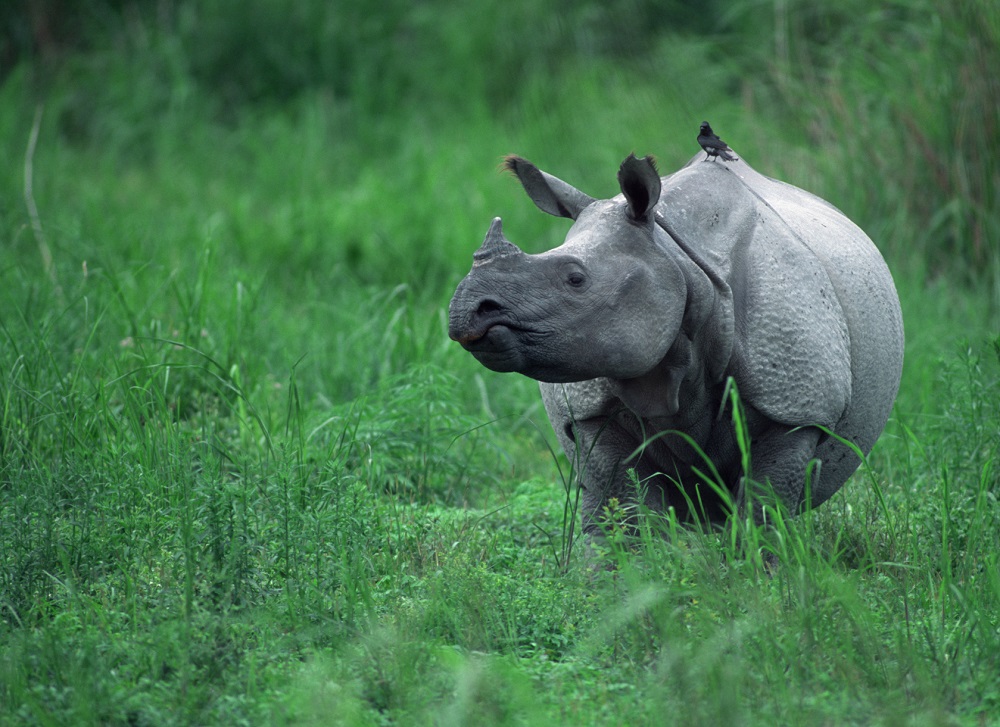 But the rising price of rhino horn on the black market is once again driving rhinos across the world towards extinction. Although protected by international law in 1977, with a black market price of £48,000 per horn, poachers are willing to take the risk.

Myths about the rhino horn

Rhino horn is made of keratin, the same substance that forms human hair and fingernails. Consumers in the Far East believe it contains medicinal qualities that help cure a range of ailments from impotence to cancer.

The belief that it cures cancer, advocated by a senior official in Vietnam in 2012, is one of the reasons that rhino horn has become so sought after. It does not cure cancer and has only the mildest of analgesic effects that would be more effectively got from aspirin.

'It wasn’t hard to decide which breed would suit the role, but finding the right dog was another matter.'

The Belgian Malinois was top of the list. Originally bred as herding dogs they had earned their working credentials as police and protection dogs and, with their intelligence and enthusiasm, the team knew they were exactly what they needed. 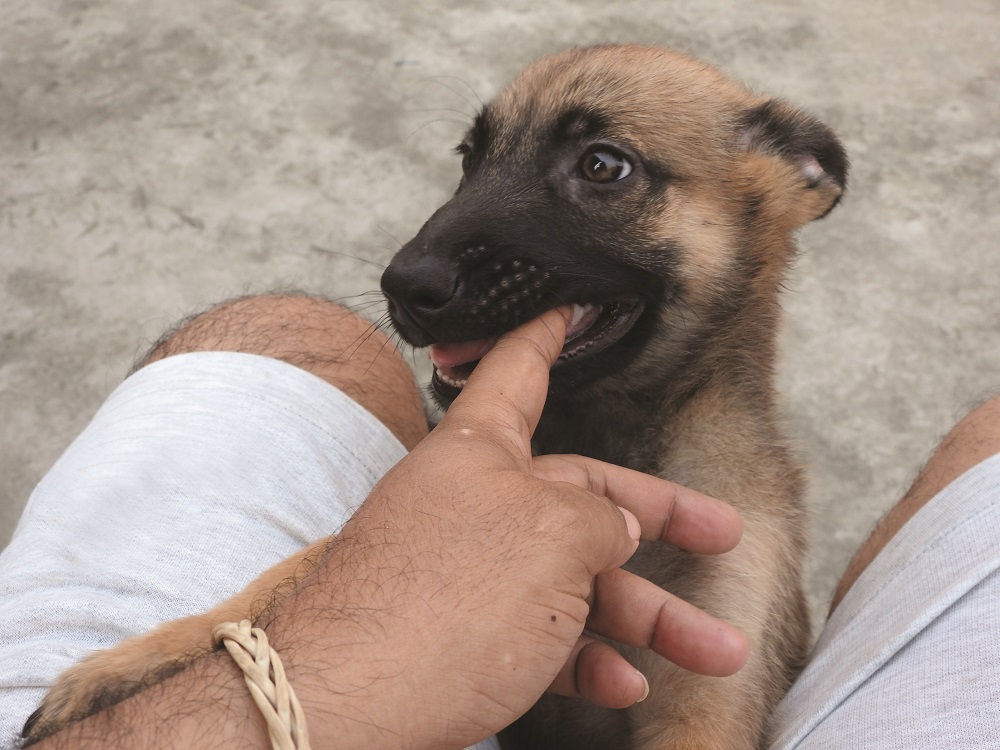 Finding a suitable Belgian Malinois with just the right drive and enthusiasm in the outposts of India however, was not so easy. After months of searching, Jorba, pictured below, joined the team in 2011. 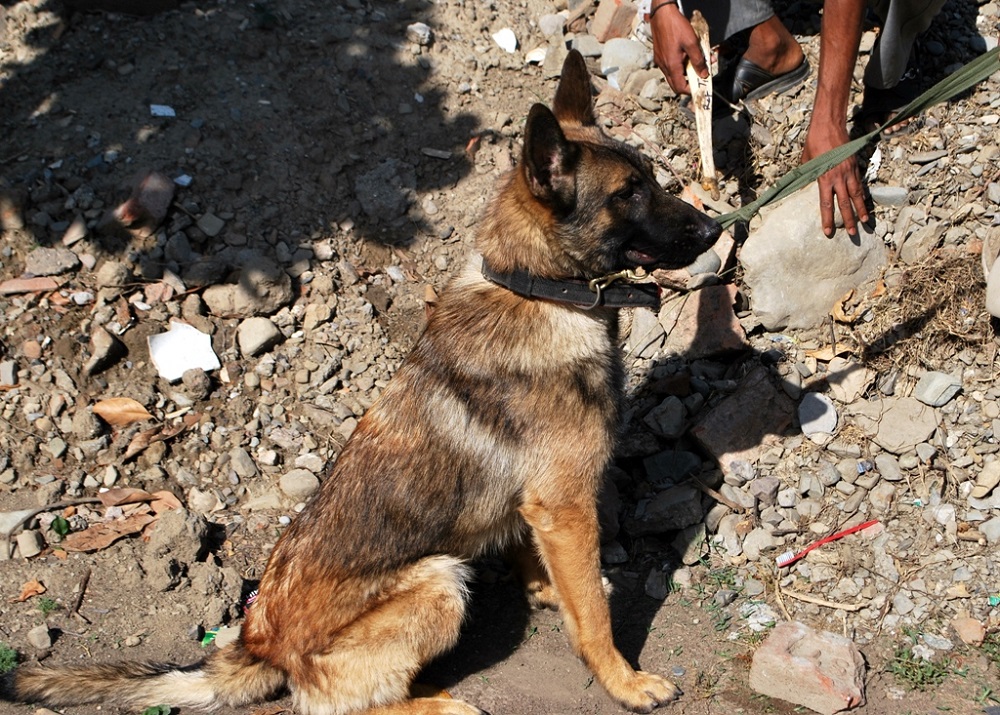 It included training Jorba to detect a variety of wildlife products including tiger skin and rhino horn and meeting his handler, Anil Das for the first time. 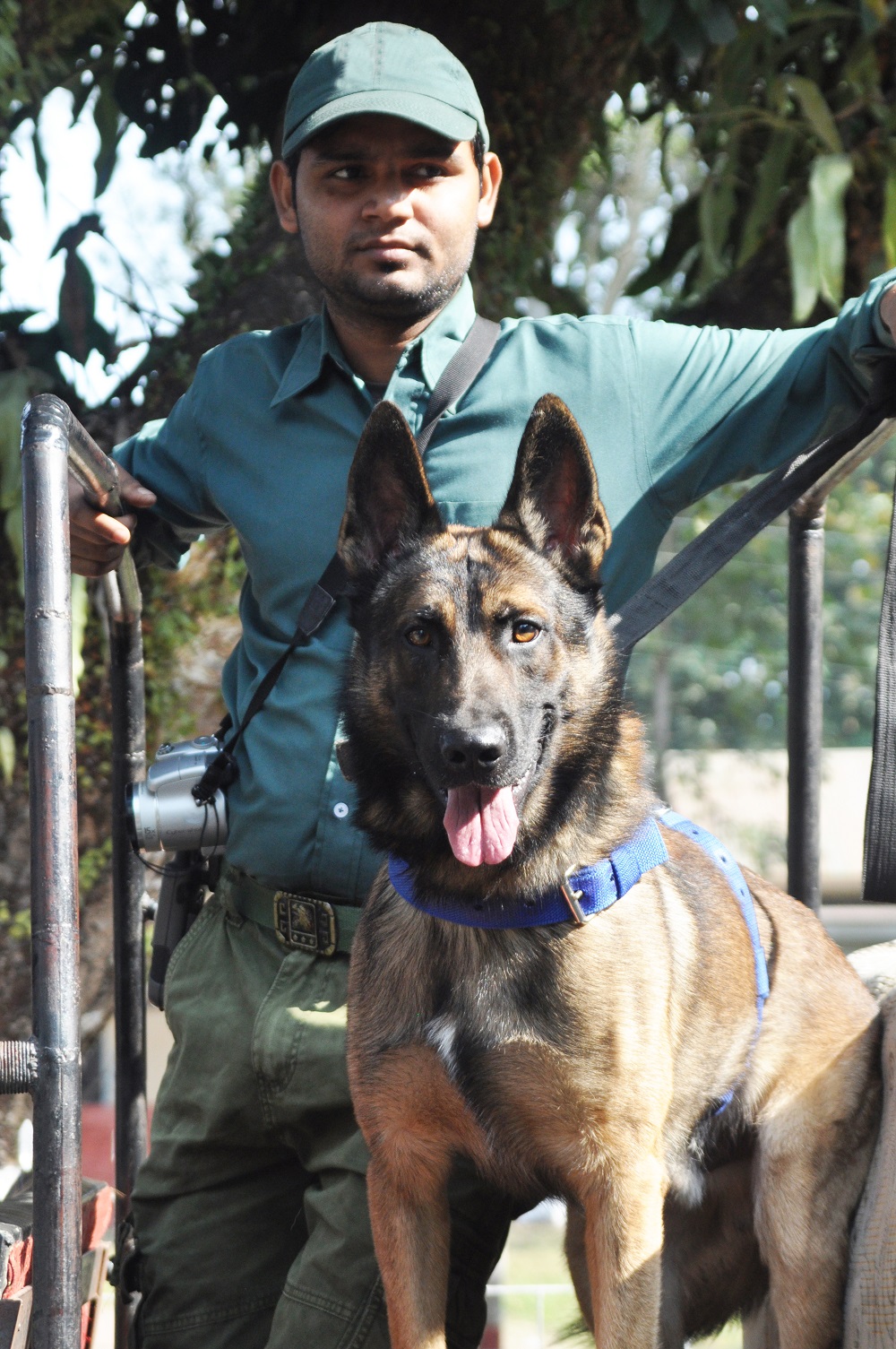 Anil, well-known in the team for his love of wildlife and dogs, was the perfect choice for this exciting new partnership and he and Jorba have been inseparable ever since. 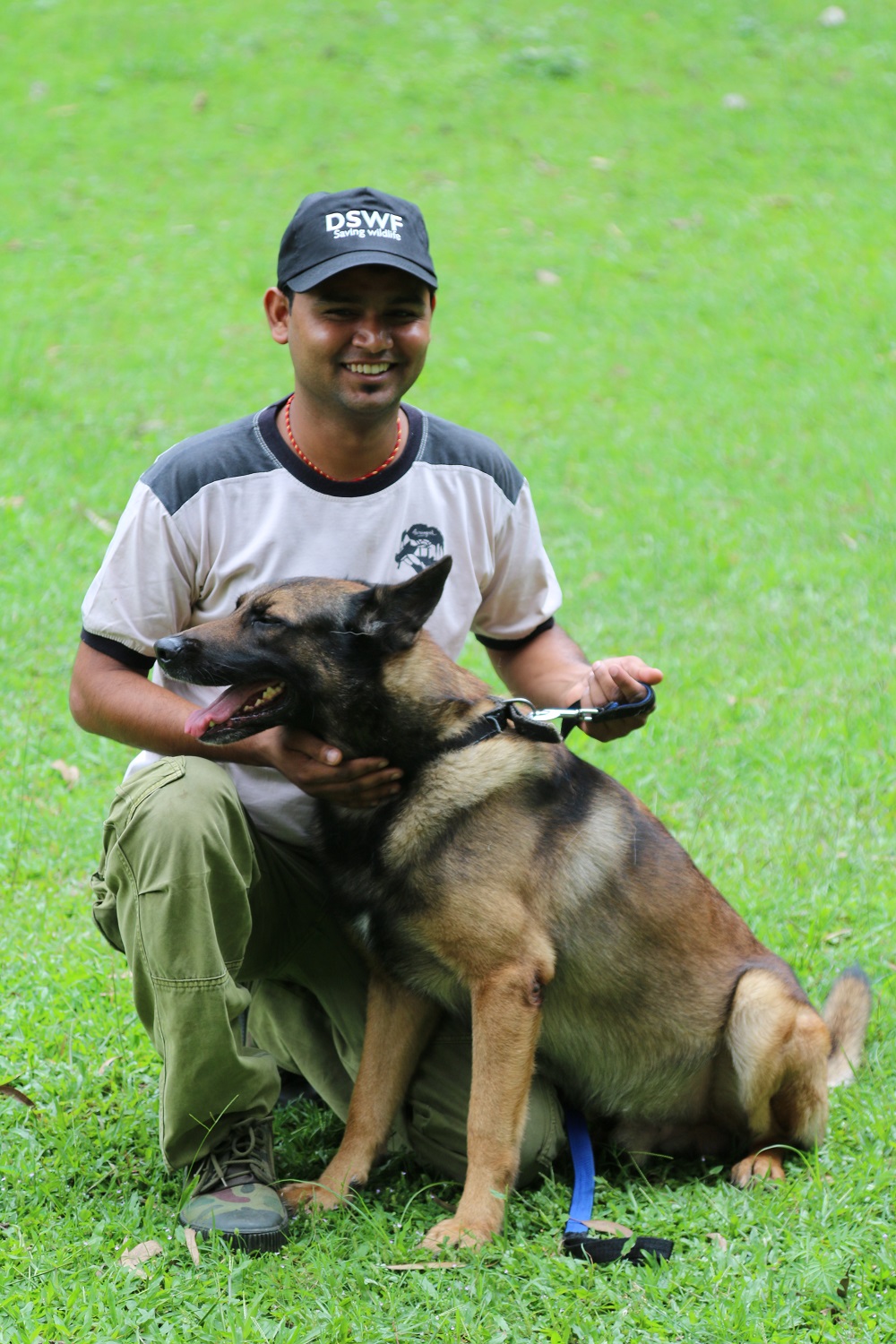 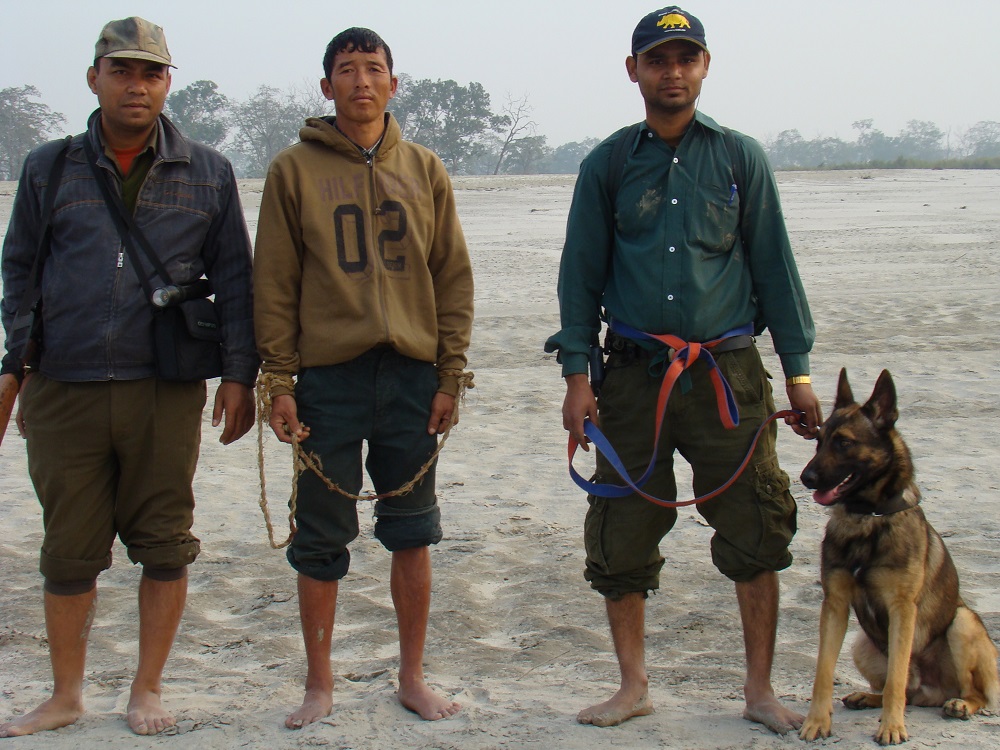 Only one other person, the man who continues to train the dogs when the park is made impenetrable by the floods, is allowed to work with him. 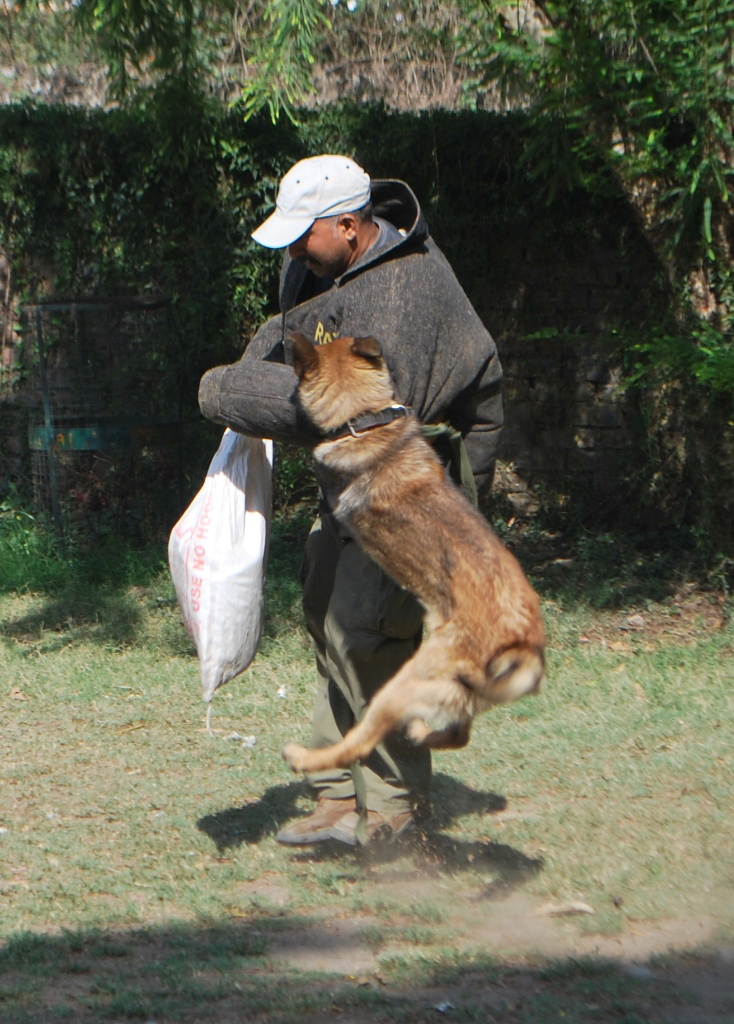 "These dogs are not pets, they are hard-working, highly trained, enthusiastic animals that respond well to instruction," says Dr Talukdar.

Jorba was soon proving invaluable to the team. Not only was he getting straight on the trail of poachers and leading the teams from the scene of the crime to the poachers hide-outs, collecting vital evidence en route, but on one occasion he recovered a camera trap that poachers – realising they had been photographed by it – had thrown into the river. Jorba tracked it down, jumped into the water and retrieved it, the photos were developed and the poachers arrested.

FACT BOX: All you need to know about the Belgian Malinois

The Belgian Malinois (pronounced MAL-in-wah) is a medium-size Belgian Shepherd dog that at first glance resembles a German Shepherd Dog. Malinois are shorthaired, fawn-coloured dogs with a black mask originally developed in Malines, Belgium, Malinois to have a great deal of stamina and truly enjoy working. They are intelligent and very active dogs that excel at many tasks. In addition to herding, they also do well with police work, search and rescue, and in performance events, such as agility.

Smaller and lighter than the German Shepherd Dog, they stand with their weight well on their toes and have a more refined, chiselled head and smaller, more triangular ears. 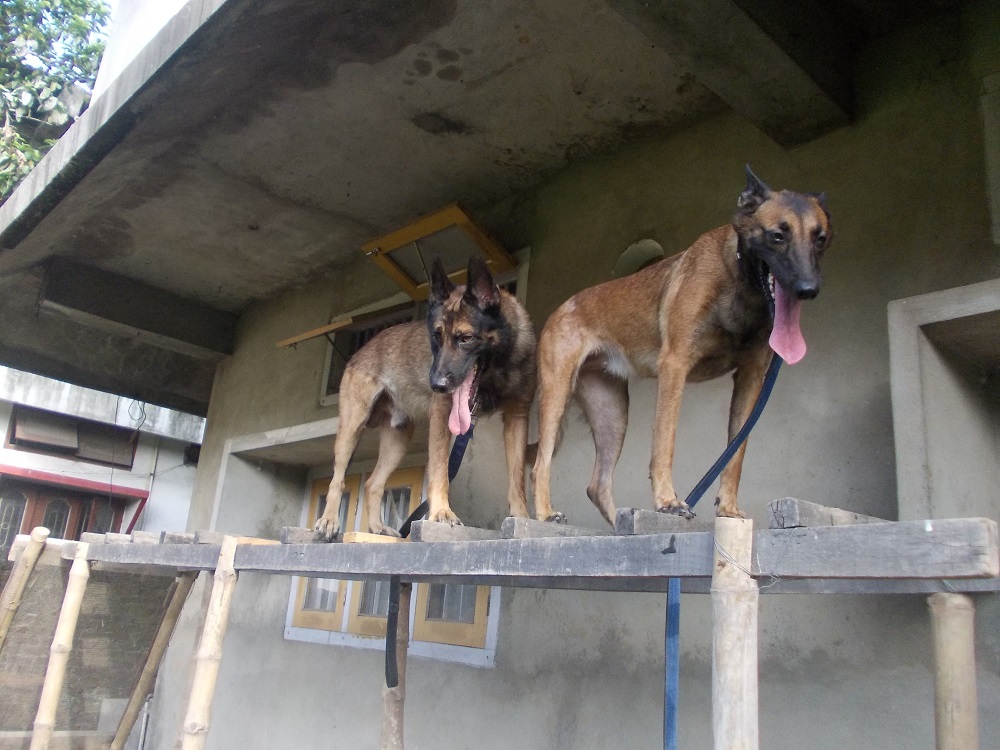 Because of their energy level and sensitivity, Malinois are recommended only for people who have previously owned dogs and have experience with dog training. Malinois are very intense dogs who like to be included in all activities. They are quick learners and eager to do whatever their people ask of them. Trainers describe them as having a high “play drive,”  which means that they love to play, and just about anything you ask them to do is play to them. 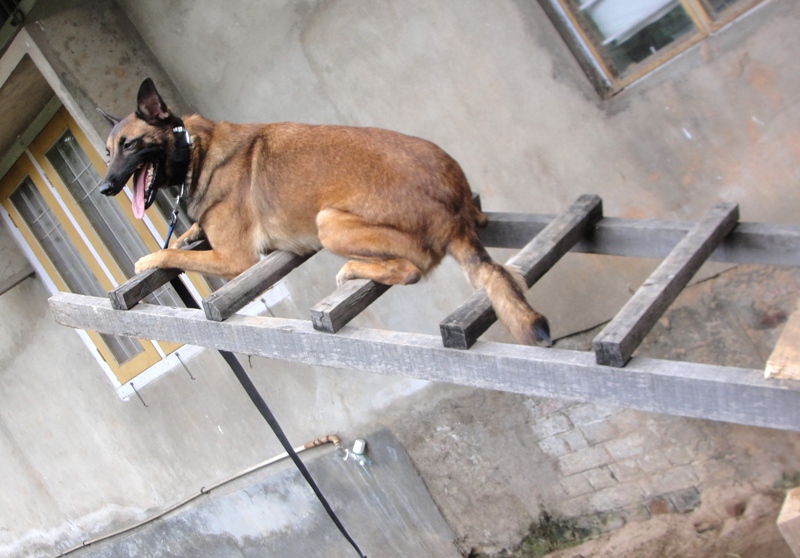 Once, when given the command ‘sniff’ Jorba rolled over and wanted to play but once he realised what was required of him he set off at high speed on his long lead dragging Anil in hot pursuit behind him. 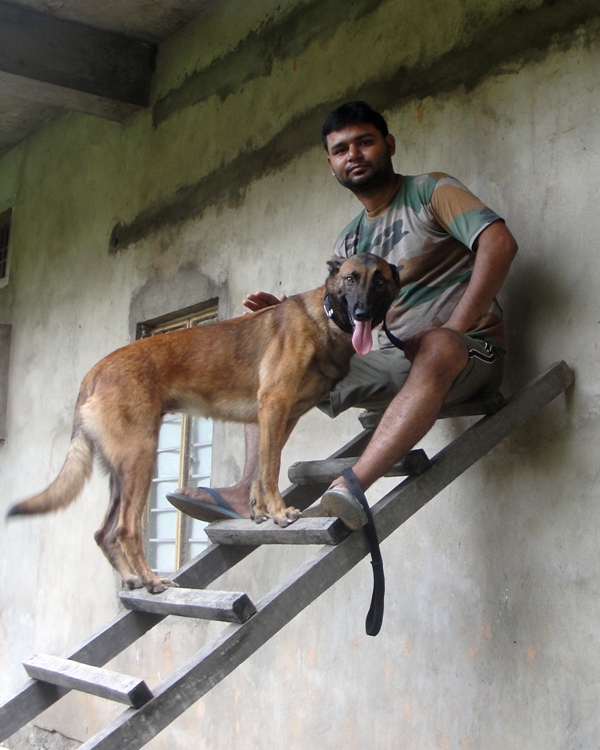 In 2014, after another extensive search, a second Belgian Malinois, a female named Babli, pictured below, joined the team. Slightly less boisterous than her male colleague, Babli’s tracking skills were soon reaping rewards.

"We have had more than 30 success stories where the dogs have led the park security teams to the poachers or their homes," says Dr Talukdar. 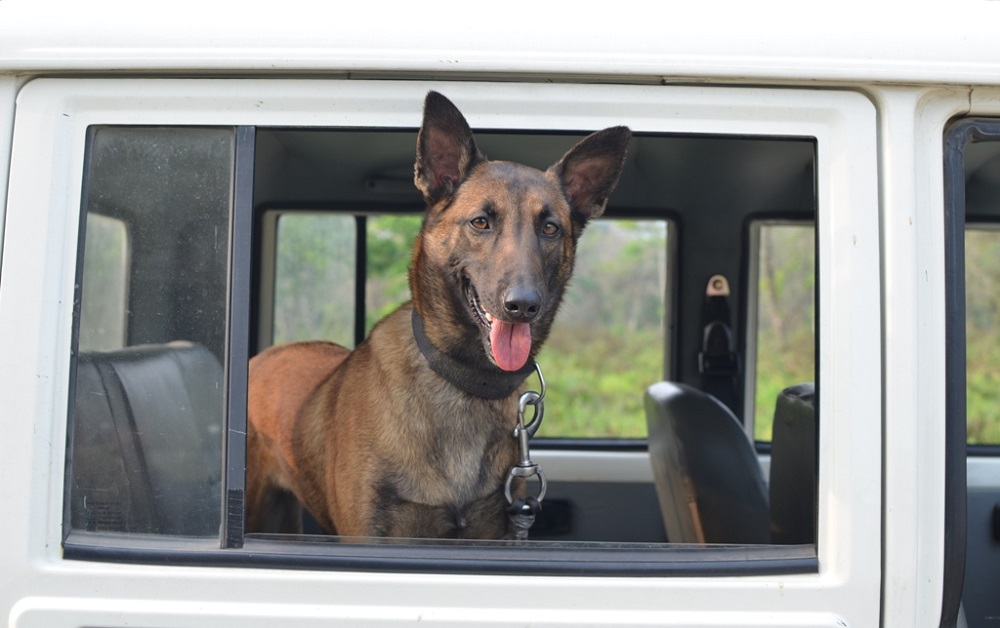 "The benefits of having the dogs around became clear very quickly," says Dr Talukdar. "But, their efficiency and systematic detection of poachers’ means that they are now on the poachers hit lists too." 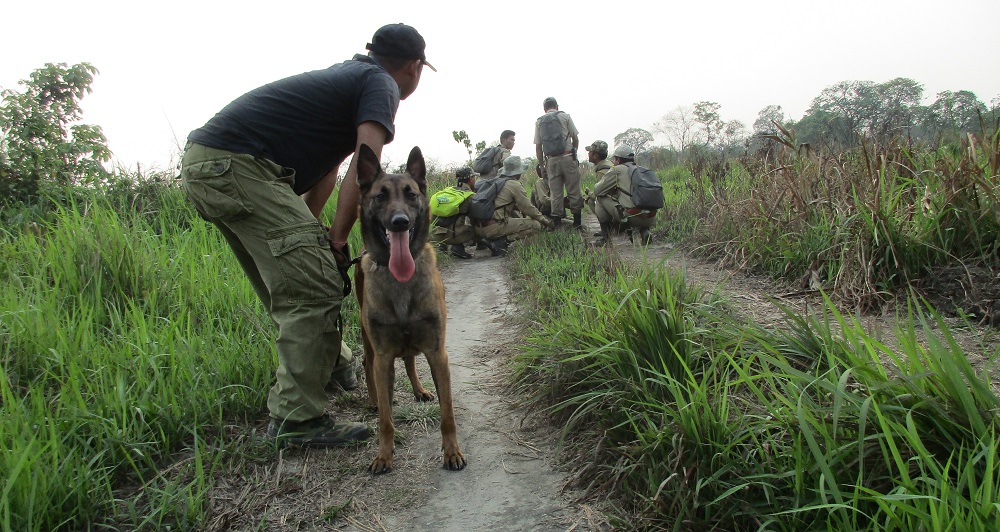 Poachers don’t think twice about killing a rhino or a tiger, they are heavily armed and focused on literally getting away with murder and for this reason, the dogs are not allowed off the lead and they and their handlers never patrol alone. As the handlers cannot manage the dogs and carry arms at the same time, they always form part of a 15 to 20 strong team of armed guards supplied by the Forest Department. Losing one of these valuable dogs is unthinkable. 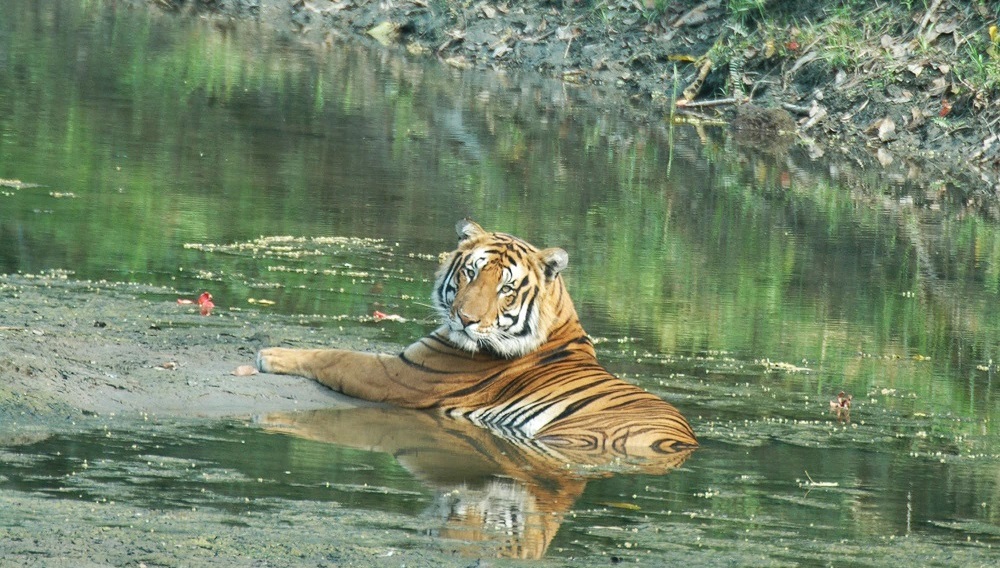 "Rhino poaching continues and so does our fight to stop it," says Dr Talukdar. "We have three more Belgian Malinois dogs in training. They will be inducted during the winter months when it’s dry and join Jorba and Babli in their successful detection of poachers across Assam’s national parks of Kaziranga and Orang and the Pobitora Wildlife Sanctuary. 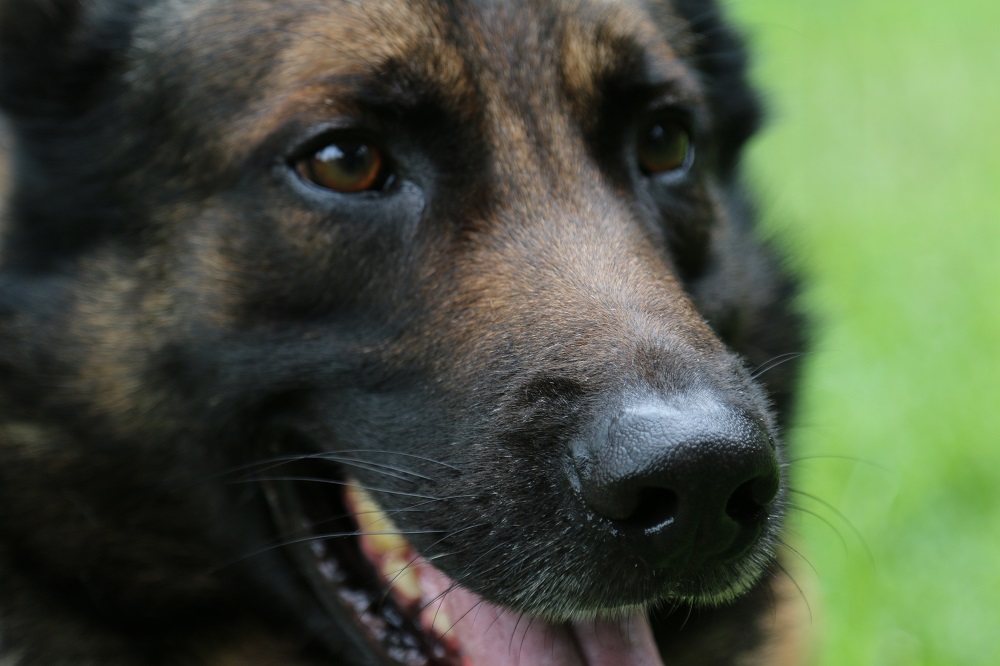 "Our ultimate goal is to breed the dogs ourselves, selling some of the puppies and keeping the best ones to be trained and to expand our work," says Dr Talukdar. "But none of this would be possible without the support of our partners in the UK."

Founded in 1984 by wildlife artist and conservationist David Shepherd CBE, to give something back to the animals that had helped establish him as an artist, DSWF funds key park protection, anti-poaching, education, conservation and community outreach programmes across Africa and Asia. DSWF has been supporting the work to protect the Indian one horned rhino in Assam since 1994.

If you would like to help support Jorba, Babli and the pups in training – you can make a donation to the David Shepherd Wildlife Foundation either by calling 01483 272323 or online at www.davidshepherd.org