If dogs could have their own TV show in the style of Jerry Springer or Jeremy Kyle, I'm sure it'd be tagged 'Why do I feel the need to hump everything in sight? Dog humping, often embarrassing, occasionally humorous, but mostly an unwanted behaviour that many a dog owner would like to stop. 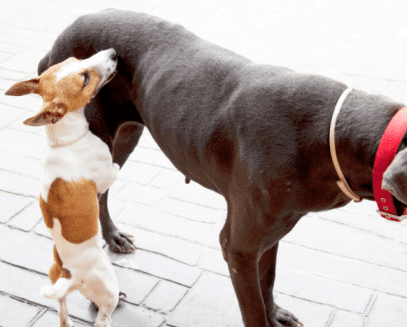 Let's see if we can offer a solution on why dogs hump and, more to the point, how to stop dogs humping.

No one would mind if their dogs only humped other dogs at the appropriate mating times. Although, that's a bit rich coming from us, the human species, given our penchant for humping whenever the mood takes us and having very little to do with our desire to create new life. Well, humping is how dogs reproduce, and if their level of discretion leaves something to be desired, well, dogs will be dogs.

Problem is, some dogs aren't very selective about the objects of their affections. They'll try to hump arms, legs, teddy bears, sometimes even cats - usually with disastrous consequences.

This type of indiscriminate humping isn't about mating. Even a dog who is frenzied by hormones knows the difference between a receptive partner and someone's leg. It's not even about pleasure, although that may play a role. Dogs mainly hump because they're trying to assert themselves. The longer they get away with it, the more powerful they feel.

Humping usually starts during a dog's adolescence - between 6 months old and 2 years old - depending on the breed. This is the time when reproductive hormones are starting to reach adult levels, and some dogs go a little bit crazy. And dogs are always trying to prove that they're tougher than the next guy. Some do it by humping. Others do it by putting their feet on another dog's back. They reach sexual maturity before they reach emotional maturity.

Is It Just Dogs Prone to Humping?

Humping is not strictly a male dog behaviour, although males are the worst offenders. Unlike females, whose hormones ebb and flow with their reproductive cycles, males maintain fairly steady hormone levels all the time. The hormones themselves don't cause humping, but they make dogs more likely to do it.

There's another reason that males are more likely than females to latch on to human legs, one that has nothing to do with reproductive urges. Males are just more competitive. They're always trying to prove (to people as well as to other dogs) how big and tough and independent they are. Humping is just one way in which they push the boundaries and assert their dominance within a family.

Why Do Puppies Hump Each Other?

Watch a litter of puppies at play, and you'll see that they spend quite a bit of time climbing on top of each other, mounting and sometimes, even the littlest of the little squirts, thrusting their Elvis-like hips in a mesmorising display belying their tender age. The scamps!

The more assertive dogs may take advantage of their position and throw in a little humping session now and then. It's their way of saying that they are, quite literally, top dogs. They hump to show their dominance more than for any other reason. Even puppies understand rank.

Once dogs are out of the litter and living with people, the same instinct remains. Human legs don't have special appeal, but they're accessible and easy to wrap paws around. In the wild, dogs never mount dogs who are higher in rank than they are. The only time that a dog tries this with people is when there's some confusion in his mind about who's in charge and who isn't.

How To Stop Dogs Humping (Prevent Mounting Behaviour in Dogs)

Sexual mounting has been successfully treated in many cases by neutering the offender. However, when the behaviour is psychologically ingrained, this may be ineffective. If the dog (male or female) is neutered in an attempt at correction, environmental/behavioural alterations are also advisable. It should go without saying that the owners must not allow or encourage further sexual mounting. Neutering a dog or spaying a female is a big decision. It, in and of itself, is not a cure for anything - other than the prevention of tiny little paws appearing sometime down the line. Don't be too quick to rush your dog to the vet as a shortcut to curing a behavioural problem. You'll be disappointed. Behavioural problems require behavioural intervention. That includes mounting/humping.

If the dog pesters for attention, it should be given a command before any reward of spoken praise or petting. Rewards should be friendly and brief, no longer than a few seconds. I say "a few seconds" because in some cases the owner may use the dog's response as an excuse to pet the dog for as long as 10 minutes. This, of course, encourages the practice that contributed to the problem in the first place.

When correcting sexual mounting, it is best to distract the dog to some other activity before it becomes firmly attached to a leg or other part of the owner's anatomy. The early signs of mounting are usually easy to spot. A rather vacant stare as the animal approaches, pawing at the owner's legs, a "humping" motion, or penile erection signal the onset of some sexual action, and mark the ideal time for distraction.

Distracting agents dog trainers have used include throwing a ball or some other plaything, followed by several minutes of intensive play-exercise; issuance of a command to Sit and Stay, to be maintained until the dog appears settled; and application of a sharp sound as an intervening stimulus, followed by quiet praise when the dog stops the mounting attempts.

Traditional recommendations to stop dogs humping that usually fail and can even cause injury to the dog include stepping on the hind toes, sharply raising the knee into the dog's chest area to knock it away from the leg; and picking up the offender and shaking it while saying "No." Don't be tempted. Not all old school dog training methods are bad, but some certainly are. You are seeking to teach new/desired behaviour, not seeking to simply cause the dog to be frightened, nervous or even injured.

Severe physical punishment may lead to other behaviour problems and in some cases may even land you in hospital. Also, with aggressive dogs, the act of sexual mounting is sometimes closely related to general aggressive tendencies, and a strong physical rebuff can produce biting, even in puppies under 6 months old. Remember, it's about distraction and rewarding the desired behaviour.

If mounting is accompanied by penile erection in male dogs, castration combined with correction of the causative factors has been successful. The effects of neutering may not become evident for up to 90 days, though in most cases some lessening of sexual aggression is noted within a day or so. In spayed females with masculine tendencies, progestin hormone therapy has been helpful when carefully supervised by a veterinarian.

In a recent study, three of fifty-seven male dogs with various problems castrated at 2 years of age found the following:

* Aggressive toward, or fear of strangers: No significant improvement. (No surprise there then. Castration is no cure all for unwanted behaviour. Training is).

* Aggression toward family members: Fewer than 33% showed a marked improvement.

* Aggression toward other family dogs and outside dogs, and territorial aggression and fear of inanimate objects: 35% of the dogs showed a 50% improvement.

Rarely seen, true nymphomania is an exaggerated sexual response in the female. Most commonly this condition is associated with other forms of abnormal sexual behaviour. Some females will exhibit a variety of estral signs, making them extremely attractive to males. While they may "flag," present their rear and signal a willingness to breed, they will almost never permit a male to mount.

There can also be evidence in this condition of normal estral signs such as an enlarged vulva and blood-stained discharge. True nymphomania is believed to originate from a prolonged estral cycle, one during which an excessive amount of the female hormone estrogen is produced.

The cause of this excessive estrogen production is believed to be cystic ovaries. A prolonged swollen appearance of the genitalia may be indicative of nymphomania. Another indication is prolonged periods of excessive sexual desire, usually without allowing a breeding. Should a breeding occur, it is usually without conception, as most females of this condition are sterile.

Successful treatment of true nymphomania is rare. A few veterinarians have had moderate success through massaging or rupturing the ovarian cysts by laparotomy. Sometimes effective treatment has been achieved through hormone injections that help to establish a normal and regular cycle. The success of therapy is not by any measure consistent. Most veterinarians recommend spaying as the normal and only viable course of treatment.

Hyperestrinism is another condition where the animal suffers from an excessive production of the female hormone estrogen. This condition leaves the female totally devoid of sexual desire. Through her scent, however, she remains an attractive nuisance to males. Again, cystic ovaries are the most common source of this problem. The dysfunction of the pituitary or adrenal glands should never go unchecked by the veterinarian, as their impairment may also cause hyperestrinism.

Understand Why Your Puppy Behaves The Way They Do

Manners, house-cleanliness and the very basics (including socialisation) are all you should really seek to instil in your puppy until such a time, as they are mature enough to undergo a more formal training regime. Puppies can deceive you into thinking they are ready for training but will ultimately ‘rebel’ against discipline as they get older. Ensuring you have taught your puppy to respond to his or her name, what is and is not acceptable in terms of house-manners and establishing an uninhibited relationship with your pup is more important than any other dsicipline in the early stages of any dog’s life.

Learn How to Identify & Solve Your Puppy's Behaviour Problems

The 100 Greatest Dog Training Tips of All Time e-Book is an invaluable tool that can not only help you overcome individual problems with your dog but can also show you some new hints and tips from the world’s top dog experts.