There are a lot of myths about adopting a dog. Firstly, that you'll be bringing a dog with an unknown history and problems into your home. Not true. Generally the rescue caring for the dog will have done a lot of work assessing the best possible owner, and home, to match the dog up to their ideal partner before you even meet him or her.

Secondly, that there are only specific types of dog, breed or age, in rescue. There are however many breeds of all ages, and with a surge in the amount of puppies being given up to rescues daily, you can often see very young puppies looking for new homes.

Adopting a dog needn't be hard, it's all about finding the perfect dog for you as Arthur's new owners found when browsing DogsBlog.com online earlier this year. Here's their story.

Arthur is a 4 year old cross-breed, although we don't know for certain I think there may be some Pomeranian in there! He became part of our family around 6 months ago.

My husband and I had been thinking about adopting a dog for a while and felt that the time was right, so began to search dog adoption sites on the internet.

I learned about Arthur’s history on his page on DogsBlog.com (www.dogsblog.com/arthur-40), there was quite a lot of detail online, and after making contact his foster carer explained more.

Arthur had originally been rescued from Romania by a charity called ROLDA – they had rescued him and several other dogs from one of the notorious Romanian shelters where he was close to death and had been starved and neglected. The Romanian vets did a splendid job in nursing Arthur back to health and his lovely foster carer worked hard with Arthur to get him to regain human trust and to overcome his fear and nervousness. 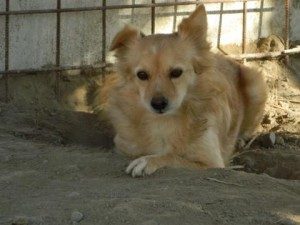 Arthur, pictured while in the care of his rescue.

When we first brought him home, he was naturally very scared but over time he has become increasingly confident. Initially, we could not walk him at all and just the sight of a lead would cause him to shake and hide in a corner, however, over time and with a little patience we have managed to get him up and walking and we now can’t stop him!

We started looking on DogsBlog and were looking for a dog that fulfilled certain criteria, firstly and most importantly they had to be good with cats as we already had 3 moggies! We weren’t looking for any particular breed, just a cross-breed, neither young nor old and roughly medium sized.

We also felt that we would have a lot to offer a dog who had experienced a bit of a ‘hard life’ or one that had perhaps been disadvantaged in some way. As soon as we saw Arthur’s write up, we felt that he might be the right one for us. His foster carer, a lovely lady who we still keep in touch with, had stated that he would best be placed in a quiet environment, without children or noise and this matched our lifestyle exactly.

We hadn’t visited any other dogs up until that point, although we had been looking online for some time, Arthur was the first who captured our attention.

When we met Arthur, he had been cared for by his foster carer in Hampshire for quite some time before she felt he was ready for adoption.

When I first saw his story on DogsBlog.com, I contacted the foster carer and she asked me to complete a form. On the form we had to put down quite a lot of details about our lifestyles (for example, how often we would be out of the house, if we had children, why we felt that we were right for Arthur). She then emailed us and sent us quite a lot of information about his background. After that point, we then arranged a suitable time to visit and fell in love with him.

We have kept in close contact with the foster carer since the adoption and become good friends. I regularly send her photos and videos of Arthur so that she can see his progress and she intends to pop down and see him some time in the near future.

Deciding to adopt when the time was right...

It had been some 18 years since we last had a dog, my husband had recently semi-retired and we felt that the time was right. Rather than buy a puppy, we felt that getting a rescue dog was the far better option – there are so many dogs out there in need of a home.

I am lucky in that I work literally round the corner and my husband is semi-retired – on the 3 days a week that my husband works he is in and out of the house. Arthur is very rarely left on his own.

Giving a dog a second chance...

It is immensely satisfying to know that you have given a dog a new home and a fresh start in life; they also bring such a lot of love and joy. I would encourage anyone thinking about getting a dog to consider adopting.

Tips for those considering adopting...

Also – if, like us, you already have cats, please consider their needs too. Always look for a dog that is ‘good with cats’. Even with a cat friendly dog, it may take some time for cats to adapt to a stranger in the house and it isn’t something that you can force on them – they have to adjust in their own time.

If I could ask Arthur anything, on the basis he could answer me, I would have to ask him “are you happy in your new home?” - obviously we would hope that the answer would be a resounding yes!

I would highly recommend adopting a dog and I found that using DogsBlog was an ideal way of finding the dog that was exactly right for us. Being able to specify certain criteria meant that we were able to narrow down any suitable dogs and this saved us from traipsing round rescue centres. It may not necessarily be that the dog that is best for you will be round the corner, so it’s worth really doing your homework until you find the right one.

When we found Arthur, we knew he was right for us and we were right for him. I have had a few people ask me why I adopted a dog from Romania when there are so many that need a home here.

Although I am fully aware that there are many dogs out there needing a home, it just so happened that Arthur’s needs matched ours and we knew that we could give him a loving, peaceful home that would help him overcome his traumatic past. As far as Arthur is concerned, he doesn’t know of a country called Romania or England – all he knows is that he has been through a bad time but now he has found somewhere that he can call home where he is very much loved and where he will be able to live out the rest of his days in peace.

For anyone who is considering adopting a dog, please do not overlook the idea of adopting a dog from abroad – many have gone through unimaginable suffering and deserve a second chance.

Visit www.dogsblog.com today to find your very own ‘Arthur’!

Story brought to you as part of National Dog Adoption Month 2013.

Have you adopted a dog? Tell us your own stories - we'd love to hear how you found your very own special canine pal.