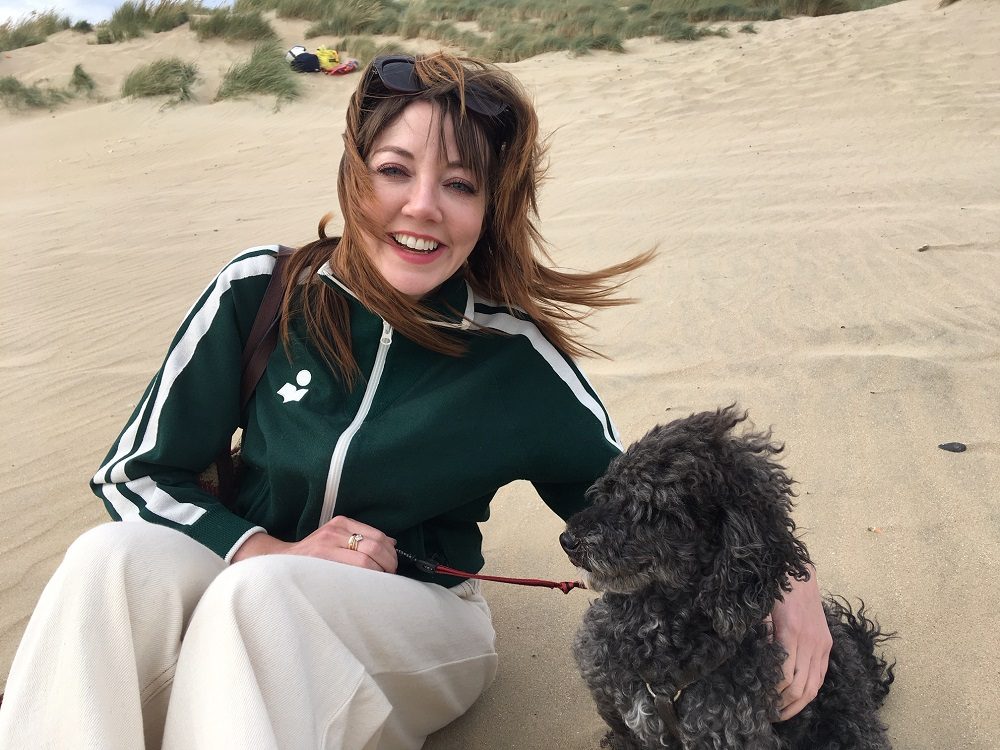 Diane Morgan is a comedian and actress perhaps best known as Philomena Cunk (who has tackled everything from the Big Bang to the history of Britain), Liz in ‘Motherland’ and ad sales rep, Kath, in Ricky Gervais’ Netflix hit ‘After Life’. Her latest show ‘Mandy’ has also just been picked up by the BBC for a full series.

We caught up with Diane to hear all about Bobby, or Robert Bovril Morg, to give him his full name.

Diane tells us about the deep bond she has with Bobby and how he has changed in the eight months since she adopted him. She also shares some funny stories from the 'After Life' set.

Hi Diane, thanks so much for your time. I know you have one dog, Bobby. Tell us all about him and how he came into your life.

Bobby is eight-years-old now. I got him about eight months ago. I’d been wanting a dog for years. My partner Ben was less keen, but then when my dad sadly passed away my partner gave in. I think he thought it would be the only thing to stop me crying! And I started looking on rescue sites.

Why did you choose to adopt?

I really loved the idea of getting a rescue because there are so many dogs in need of homes.

How did you know Bobby was the one?

I thought I would get a Pug or something like that but I saw him on the Blue Cross website and fell in love immediately. I got in touch with Blue Cross and went up to Radcliffe to meet him. Took him back home on the train two hours later!

Was he called Bobby when you adopted him or did you rename him?

As he’s an adult dog it would have been strange to suddenly re-name him so we kept Bobby. It actually really suits him anyway.

What makes him tick?

He loves chicken and tennis balls. He’s also fond of company, luckily I’m able to give him all these things in abundance.

Has he changed much in the time he’s been with you?

He settled in quite quickly. Its been nice to see his confidence grow when I take him on TV sets.

Now he hops up into the make-up chair and runs over to greet everyone. They love him so he basks in their adoration.

Is he your first dog or did you grow up with dogs?

I grew up with dogs. We always had one. We never had a rescue though but I’d highly recommend it. You develop a deep bond. Even my partner has totally fallen for him.

The second series of ‘After Life’ is coming to Netflix soon. Bobby visited the show's set with you, didn’t he?

Bobby would sit on set in Ricky’s chair when Ricky was directing. He very much enjoyed all the attention and massages he got from the ladies! (Bobby not Ricky!)

If you were to swap roles with Bobby for a day, what would you love most about being him and how do you think he’d cope as you?

I love his lack of responsibility! I’m quite happy lounging about. I’m not so sure how he’d cope with sending in VAT returns though.

Where’s Bobby’s favourite place in the world to be?

Running on a beach.

What advice would you give to anyone thinking about getting a dog?

Get a rescue as long as you don’t have to leave him or her on their own for more than three hours.

Enjoy the small things and live in the moment.

Finish the following sentence, my dog is…perfect. Full of love.

This is always a tough question so you might need some time to think about it, but if you could ask Bobby one question and one question only, what would you ask and how do you think he’d answer?

Watch Diane as Kath in 'After Life' series 2 Netflix from 24th April and keep an eye out on the BBC for her new show 'Mandy' later this year.

In this article:Featured, Issue 136