We love finding out about people and their dogs. There’s always an interesting story to be shared and journey to be followed.

This month we catch up with Courtney Hope, who is perhaps best known for playing the iconic Sally Spectra on the hit daytime US soap, ‘The Bold and the Beautiful’. But if you’re a fan of gaming, you might also recognise her as the voice who brought 'Beth Wilder' from the hit Xbox One video game and subsequent sci-fi TV show ‘Quantum Break’ to life.

Courtney invited us into her home to introduce us to her ‘pup pack’ and told us which of her dogs is most like the TV, film and gaming characters she’s played over the years. 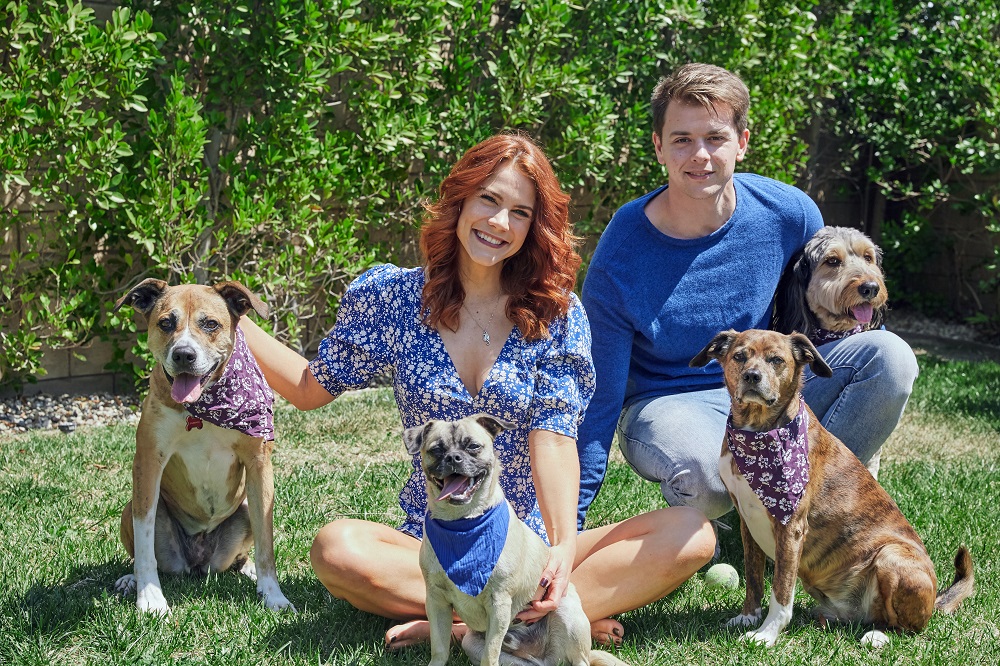 Hi Courtney! Thanks so much for your time today.

Hi! Thank you so much.

We know you own three dogs, Stevie, Bella and Bentley, so taking it chronologically, who came first?

Stevie was first. She was my first dog, ever.

How did you come to own her?

I adopted her from a shelter when she was three months old (she’s now 10) and she’s a Cocker Spaniel/Terrier mix.

She’s so sassy, independent, loving and smart, and my whole world! She’s definitely an explorative people’s dog. I take her everywhere with me! 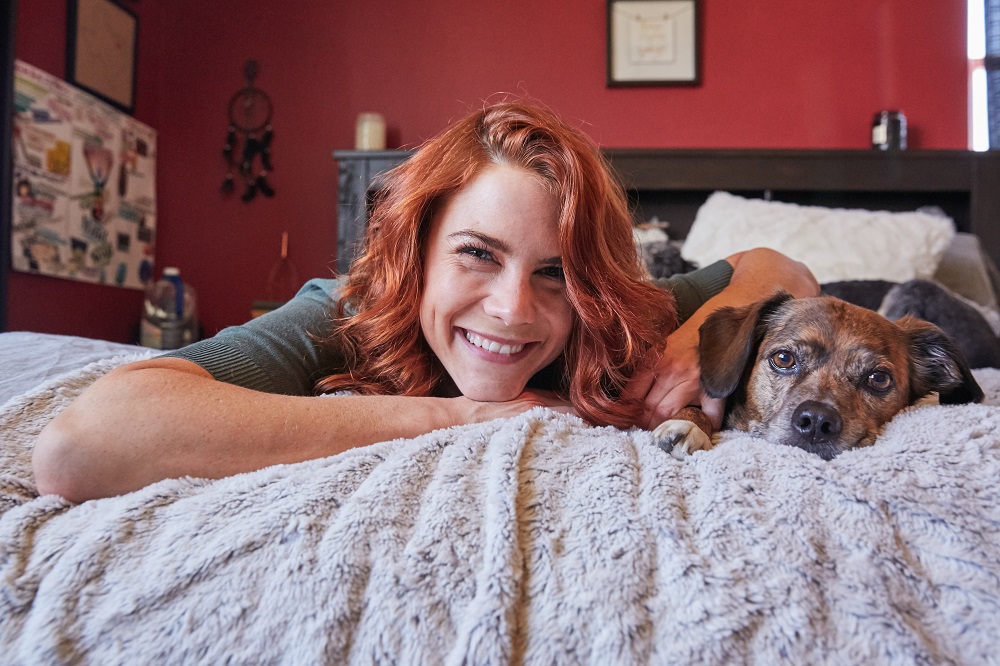 A few months after Stevie, I adopted Addison and she quickly became my dad and brother’s best friend! I moved out of my parents' house three years later and couldn’t take her because she needed a yard.

She is a Shepherd/Husky/American Bulldog mix and couldn’t live in an apartment because she is so active and hyper, so she became my brother and dad’s dog. She’s 9 now and we see her every week, she's still a part of our family pup pack. Her and our youngest Bentley are inseparable. She’s at our house right now actually! 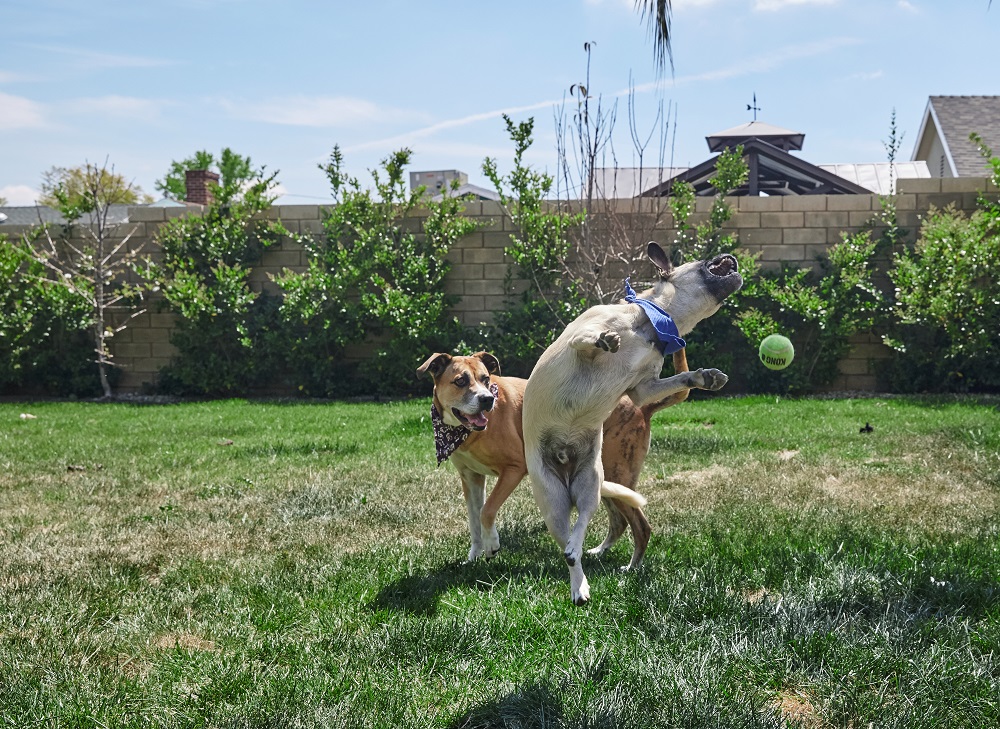 We love the fact Addison got involved in your shoot for us as well.

Who’s next in your pack and what’s their story?

Bella is the next youngest and she just turned four. She is a Bernedoodle and a big teddy bear! She was Chad’s [soap actor Chad Duell, Courtney’s parner] before I met him and now she’s both of our baby girl!

She is one of the sweetest dogs I’ve ever known. I love her so much. She’s so devoted to us it’s incredible, she loves to cuddle! 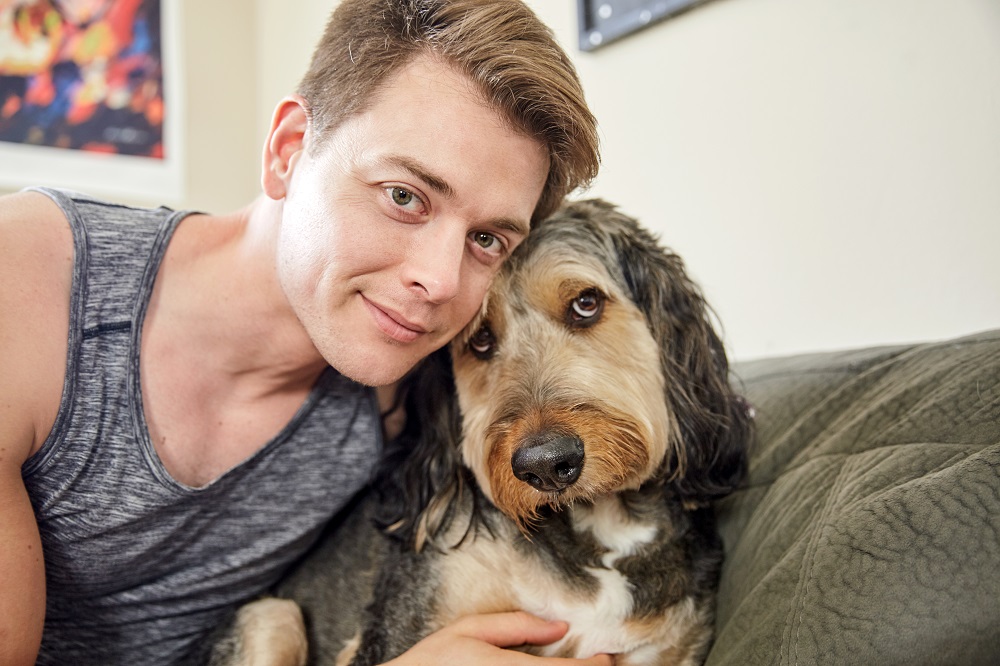 She has such an expressive face, doesn’t she?

That leaves Bentley as the youngest, how did he come into your life?

Bentley just turned one. He’s a Pug/Terrier mix and a hysterical handful!

Chad and I wanted to rescue a dog together, so we went to the shelter for weeks and found this sweetheart and fell in love!

He’s the only boy dog and so different than the rest of the pack, but by far the most sensitive and affectionate, which we didn’t think was possible given how loving our other pups are. 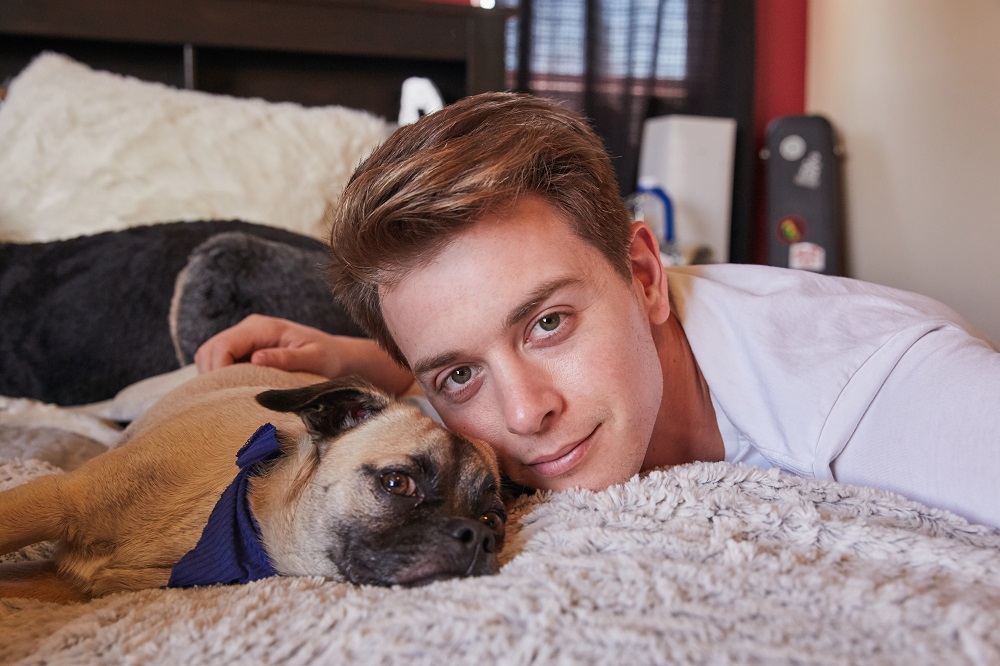 Has your family always owned dogs?

I actually never liked dogs growing up because I had a terrible experience when one chased me when I was around eight. My parents never had dogs either, so they were never around me, ever. They always scared me and I never understood why people liked them. I always had cats, but I was so allergic to them and couldn’t get too close.

How did your love of dogs come about?

When we moved to California we brought our cat out with us and unfortunately she went missing after a few years living here. We went to the shelter for weeks and weeks looking for her but to no avail. The last day that we went (two months into looking), I was so heartbroken that I decided to take a stroll and ended up in the dog section.

I walked past the kennel that Stevie was in and stopped dead in my tracks when I saw her face. She just got me. So I decided I wanted to adopt her. My family was so confused, but I cried so hard because I knew I needed her. I went through a bidding war at the shelter for her, but was determined to win out and thank God I did. She changed my whole life and my families perspective on dogs. And now look at us all! (laughs) 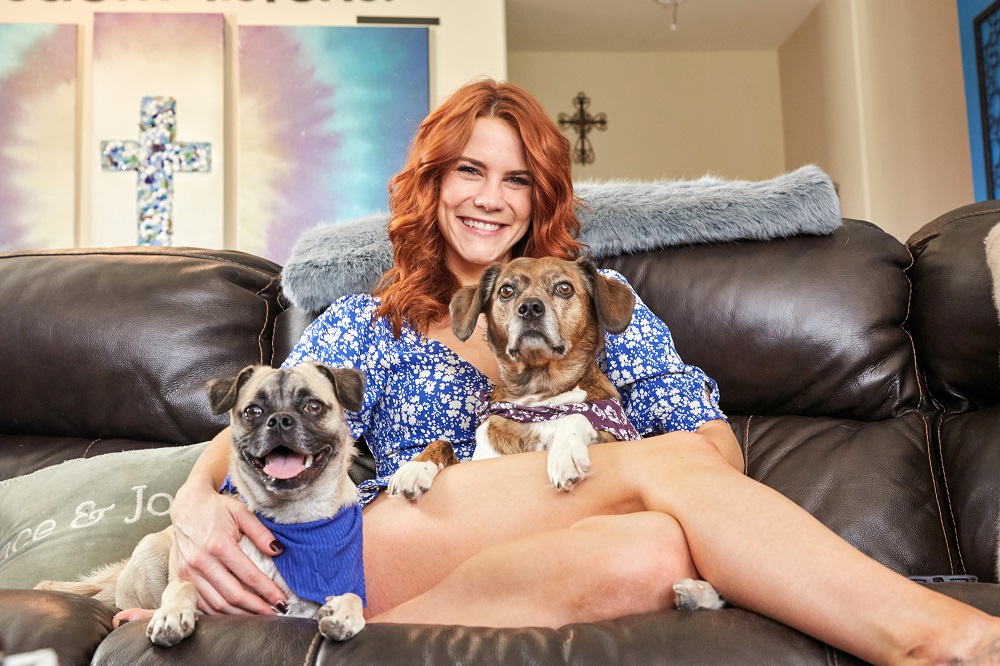 You’ve been playing Sally Spectra on ‘The Bold & the Beautiful’, the great-niece of the original Sally Spectra played by Dalene Conley, for some time now. Looking back, what’s been the best – or most terrifying - thing about taking over the iconic name on the show?

The fact that it is such an iconic role and I have the privilege of playing it is beyond rewarding to me. I wanted to do it justice with my interpretation and blend a little of her traits with my own ideas. It’s been such an incredible role to play!

Separately, our readers might recognise you from the gaming world too. You’ve just brought to life the character Jesse Faden in the video game ‘CONTROL’ and you’ve been the voice behind other memorable characters over the years. Tell us about the character you play in ‘CONTROL’.

It’s a third person, action adventure, paranormal thriller game and I play Jesse Faden, a strong and curious girl with a past full of questions and secrets. She’s so much fun to play and the world is beyond cool and weird! I can’t wait to have everyone play.

What’s the best thing about recording for games compared to filming for TV shows or films? Does it give you more freedom?

It’s actually more difficult because I don’t have much of anything to react off of. My imagination is working full force to create everything because sometimes I don’t have anyone else shooting with me.

I enjoy it so much though, it’s really made me a stronger actor!

Of the characters you’ve played over the years, which most resembles each of your dogs’ personalities and why?

I did a TV movie last year called ‘A Friend's Obsession’ where I played this spunky girl names Brooke and I’d say Bentley is a lot like her!

Addie is a lot like Cassi who I played in a film called ‘Displacement’ - very dramatic and athletic!

Bella is a bit more difficult because she’s very overly sweet, a bit skittish and very shy when she doesn’t know you and I haven’t played many roles like that. Maybe one day! 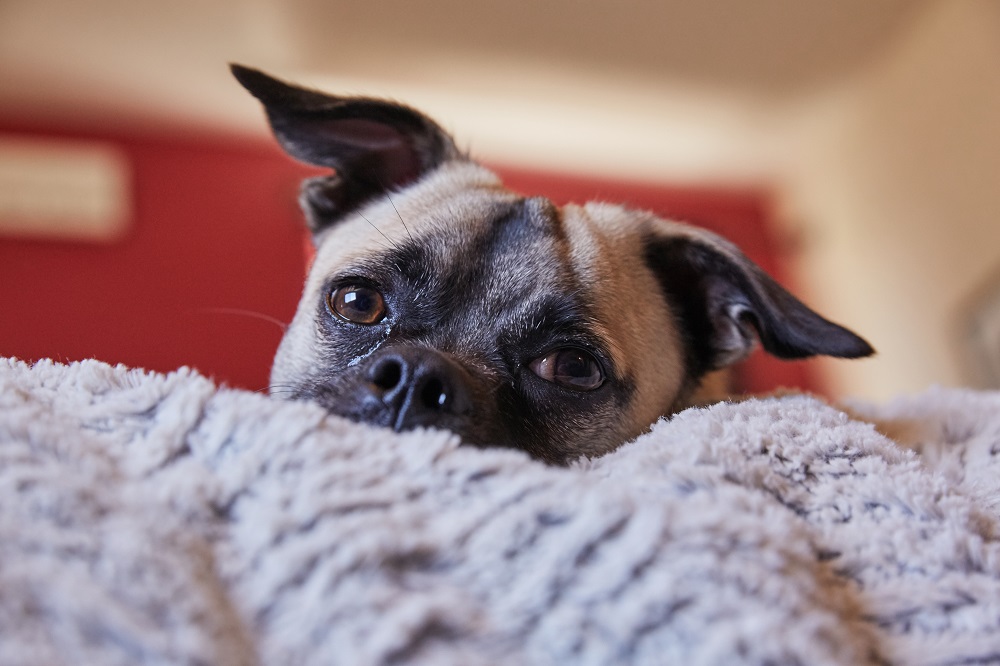 And what about you, which of your characters most channels you?

They all have a bit of me in them. That’s how I relate to them and make it something I research and understand. I’d say Sally is probably the most like me, but not completely.

She’s got drive, spunk, she’s outspoken and loyal. She’s definitely more self-deprecating and doubtful than I am though. I am not much that way, I try to always stay positive.

You’re originally from Texas so we’re wondering what life is like for a dog in Texas versus Los Angeles, your current home. Are there many differences?

It’s become more even. Dogs were always welcomed in Texas that I noticed. People love dogs in their trucks and running free in the field. But Los Angeles has become saturated with dog friendly spots, which I love. 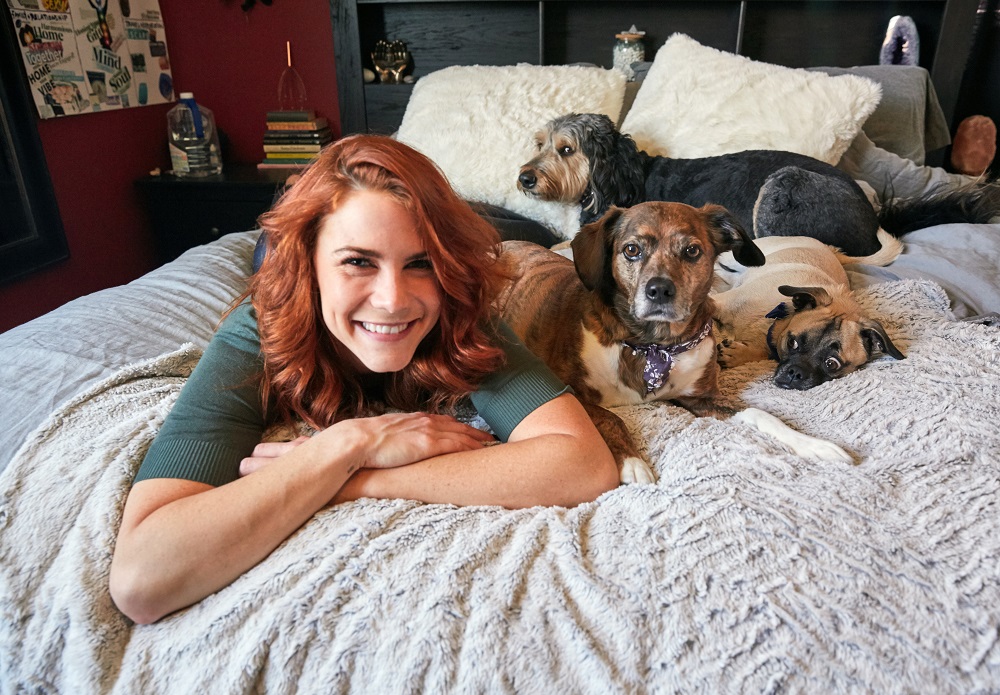 Moving onto some of our more playful and quick-fire questions...so, all in the name of fun and based on personalities alone, which breeds of dog come to mind when you think of these dog loving soap stars and why:

Denise Richards (plays Shauna Fulton in ‘The Bold & the Beautiful’) – Pomeranian! She’s so stunning and well put together, but she’s strong and spunky!

Chad Duell (plays Michael Corinthos in ‘General Hospital’) – A Beagle! He’s very curious and loyal, even-tempered and determined. He’s got lots of wit, but he loves to chill and relax too!

Patrika Darbo (played Shirley Spectra on ‘The Bold & the Beautiful’) – Shih Tzu! She’s so lively and affectionate, very clever and outgoing. I have always thought that.

I love tasks and obstacles to overcome. I’m very expressive, love to talk and can be excitable. (laughs) 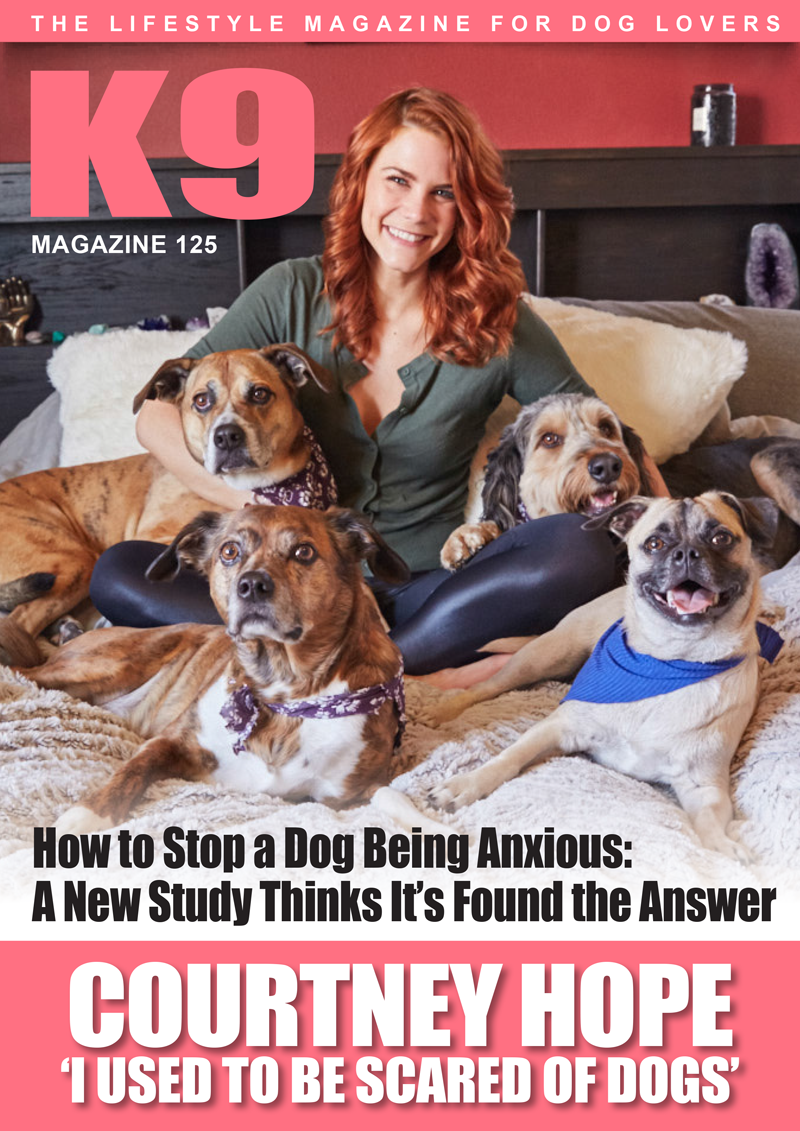 Way to Spend Your Downtime – Hanging with my family and pups. Working out, hiking or having game nights with friends.

Book – Definitely ‘The Power Of Now’, ‘The Mastery of Love’ and ‘Blood Lily’.

Movie – I’m very into documentaries at the moment.

What are your dogs’ current favourite:

Places to Visit – The dog park and the dog beach. And my parents' house!

Games to Play – Fetch or 'go find it' with treats or fake lizards.

Activity to Interrupt – At home when I'm dancing or working out, or stretching sessions.

I’ve learned to dance with them, stretch under them and workout around them! I find it endearing, it gets them wanting to play and that makes me happy!

Finish the following sentence: my dogs are...my happy place, my saving grace, my safe haven and my teachers.

What one life lesson do you think we should learn from dogs?

To enjoy the little things in life.

My dogs get excited about the smallest things and it’s so important to have things to look forward to. Also, Stevie sunbathes outside first thing every morning and always has, and now Bentley does too.

It’s opened my eyes to appreciate nature’s wonders that we sometimes take for granted. Stop, just breathe and take in the beauty of the day. 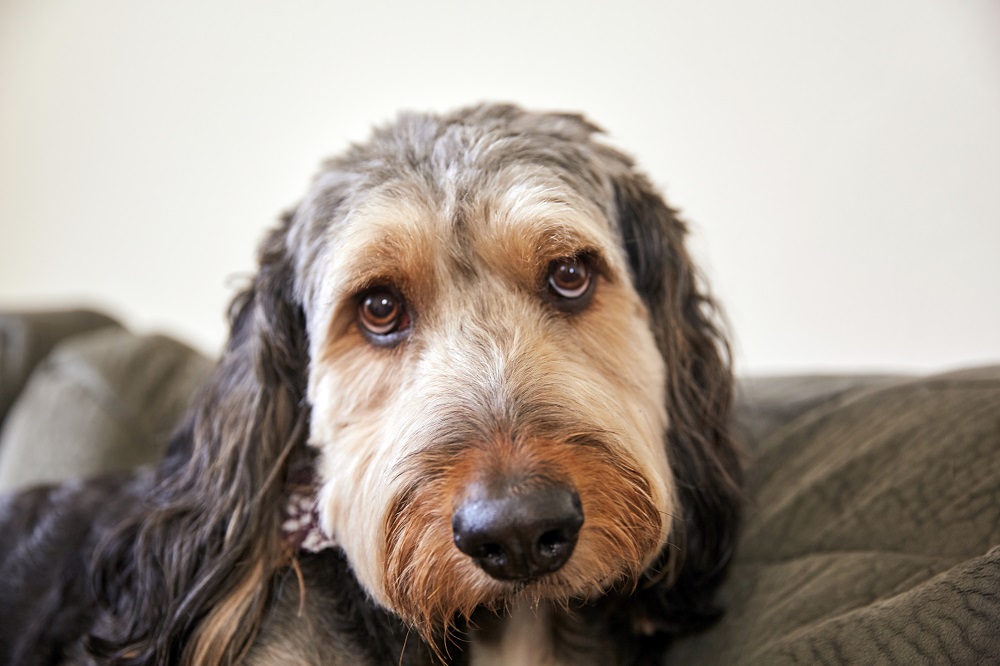 And finally, if Stevie, Bentley, Bella and Addison could speak and answer one question and one question only, what would you ask them?

I’d want to know what each of their favourite things to do was so I could make sure to do it every day with them.

What do you think they’d say?

I think Stevie would say car rides and exploring. Bentley would say playing and Bella would say cuddling and Addison would say running.

But most importantly, I’d love to know what they each sound like! Chad and I always try to pretend we know what their voices would be like so I’d like to see how they truly sound!