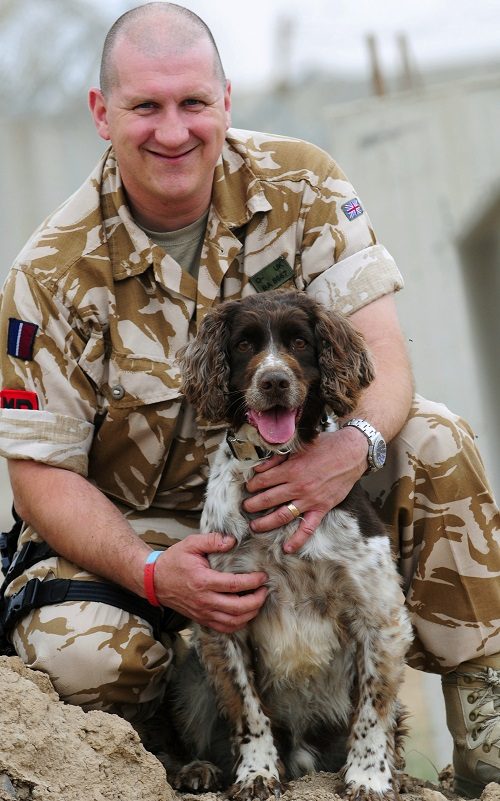 In the heat and dust of Afghanistan, RAF Police Flight Sergeant Will Barrow and his bright-eyed Spaniel, Buster, risk their lives every day, dodging the Taliban’s sniper bullets as they lead out on foot patrol, alert for IEDs.

This is a heart-warming story about courage, friendship and a much-loved dog with a nose for danger and heart of pure gold.

Those who aren’t dog lovers probably think that talking to our four-legged friends is a step too close to crazy, but sometimes there’s no better conversationalist than a dog: if you are afraid they sense it and calm you without uttering a word. If you are making a fool of yourself they draw you to one side and give you that look that says ‘you know you can be a real prat sometimes’. And if you are lost for words they fill the silence by giving you a big kiss. As Buster leant his warm Spaniel body into my leg I felt a swell of reassurance wash over me. I knew that if I died tonight I would not be alone because my best pal would be watching over me, recalled Will.

If you’re anywhere near a group of military dog handlers you will overhear plenty of dog talk. The good dogs, the bad dogs and even the indifferent dogs make their mark on a handler. If you share everything from your food and your friends to your bed, in the shadow of war, bonding is inevitable. But it’s the dogs with personality – the ones who are almost human and challenge you as you journey together—that really carve an imprint on your soul.

Here's one of our favourite excerpts from the book written by Will Barrow & Isabel George:
Patrols were unpredictable. Some were meant to be little more than ‘social calls’ to engage with the local people, reassure them, and sometimes hand out money in the hope they would invest it in growing a less toxic crop than opium. We always left with high hopes. But the nature of the patrol was that it could always swing the other way and what had been a peaceful day visiting a string of compounds talking to ordinary hard-working people struggling with abject poverty became a stark reminder that this was a war zone and we were not on a Sunday School outing.

One morning’s visits seemed particularly uneventful, one meeting blended into another. Buster was restless. He wasn’t being a bother but he was in constant search mode and not finding anything. He enjoyed the meeting and greeting part of the job, but at the same time, he knew that he was there to work and maybe it didn’t feel like work to him.

We were searching another poppy field, when suddenly Buster stood to attention and thrust his nose in the air. I knew he had heard something, but I couldn’t see what it could be and put it down to dog-stuff. Crack! Crack! Crack!

We were suddenly exposed to the all too familiar sound of gunfire. The treeline was about 40 metres away to our left and it was the only cover available for miles around. The other hit the ground while I dived into a drainage ditch, dragging Buster with me. We landed in a bit of a heap of arms and legs but I was more worried about the increasing exchange of shots.

The noise was deafening as we returned rapid fire, and all the time Buster was curled up by my feet. Seeing him so cool and collected was a good thing for me because I was neither.

‘Throw smoke!’ The order went out to release our red phosphorous grenades. I popped my head up, wanting to see the spectacle.

To my horror I realised they were yelling at me to throw the thing as I had the best cover. I put my brain into rewind to recall the briefings on the grenades and remembered they have a blast radius of 30 metres- and I throw like a girl!

I took it out of the pouch and I’m sure that the lads thought I was reading the instructions or something, the amount of time I was taking. ‘Throw the bloody thing – now!’ I pulled the ring and pulled back my arm to launch the grenade. My heart was thumping, my mouth was dry and I was shaking and sweating in equal amounts. ‘Thirty metres,’ I kept saying it to myself, ‘thirty metres.’

In that second, out of the corner of my eye, I saw Buster up on all fours looking very excited, tail wagging, and with total focus on my throwing arm. I knew exactly what he was thinking. Oh, no. As I hurled the grenade with one hand, I stamped a foot back onto Buster’s lead, just in time to bring him back to earth. My weight on the lead managed to stall him in full flight before he had a chance to chase down the grenade. He was going nowhere.

Buster’s expression was a mix of anger and disappointment – loping along, head hanging low with a weirdly furrowed brow – and I knew what he was trying to tell me in the best way he could. He had seen me with my arm raised over my head and he thought it was game on! And guess what? I went and spoilt it all.

A real tale of one man and his dog. We salute you Buster, and of course Will!

Buster won a Crufts Friends of Life Award in 2012 to a standing ovation and was also nominated for a prestigious Sun Military Award in 2009. He is unique in that he has served in three separate theatres of war: Bosnia, Iraq and Afghanistan. Buster is also the official lifetime mascot of the RAF Police, no other dog has been honoured in this way.

Having retired a military hero in 2011, Buster now lives with his handler, RAF Police Flight Sergeant Will Barrow in Lincoln.