Bitsie Tulloch is an actress best known for her current lead role in the hit TV show 'Grimm' playing Juliette Silverton. Also appearing in the acclaimed film 'The Artist', Bitsie has two films due for release soon – the crime thriller 'Dead Draw' where she stars opposite Canadian actor Michael Eklund, and the hugely anticipated 'Chronic' opposite the UK's own Tim Roth.

Kim O'Meara caught up with Bitsie during her down time filming 'Grimm' to hear all about her constant leading man, her dog Henry.

Henry is a 4 ½ year old French Bulldog. He's goofy, sassy and super courageous - not even remotely intimidated by bigger or meaner dogs. I have had him since he was about two months old and we have been through so much together, including a move from California to Oregon to shoot 'Grimm', and more importantly a life-threatening stroke he suffered last year. Learning to care for a disabled pet has been a huge adjustment for me, but now that he is walking again it's much easier to take care of him and more a matter of taking him to physical therapy and making sure he takes his medication.

When you decided to get a dog, what was it that led you to Henry and made him stand out as the one for you?

I just always wanted a French Bulldog named Henry. But in my mind I wanted what I call a "breadloaf" Frenchie - the little chubby cream-colored ones, but then when I started looking, I saw a photo of baby Henry and immediately knew he was my dog. I don't know why, just a gut reaction, because he looked nothing like what I had envisioned was going to be my Frenchie. I just knew he was mine. 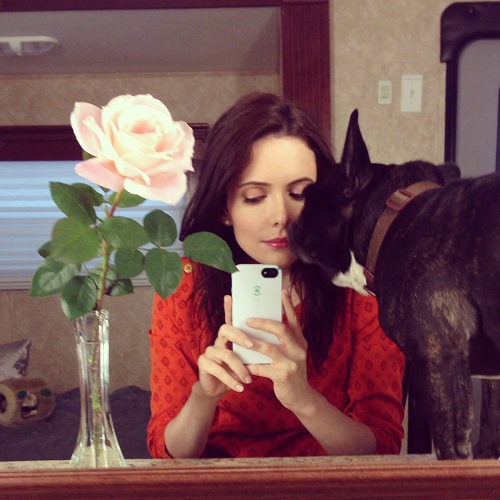 You grew up in a lot of different places, including Spain, Uruguay and Argentina, how do attitudes to dogs differ from place to place in your view?

I don't recall there being much of a difference. I think it's fair to say that dogs are pretty universally beloved.

Tell us a little about Henry’s stroke, how did you adapt and evolve as a dog owner after that? How is he getting on now?

Last year in early December, Henry had a Fibrocartilaginous Embolism ('spinal cord stroke'). There were few warning signs other than that day he was looking pretty weak and didn't want to go outside to play or go for a walk - Frenchies are incredibly playful and have a ton of energy so that was unusual. It was one of the worst nights of my life - I came home from a concert to find him hyperventilating and paralyzed from the waist down. He was in the ER for 5 days in an oxygen tank and as soon as I got him home I started taking him to physical therapy 3-4 times a week. Now we are down to once a week.

He gets acupuncture, underwater treadmill, laser therapy etc. He was completely paralyzed from the waist down for over a month, and slowly regained feeling in his legs. He was in diapers, and I had to manually express his bladder and bowels a few times a day - that's true love! He loves his physical therapists at Back on Track Rehab in Portland, and seems to be aware that everything they're doing is helping him -- he barely lets me brush his teeth, but happily lets them stick acupuncture needles in his back.

Your TV show 'Grimm' is a huge hit here in the UK. For anyone who hasn't watched it yet (where have you been!), describe the show and your character to them.

'Grimm' is a TV show that is half-fantasy, half-procedural. The basic idea is that fairy tales and creatures do indeed exist, and my character's boyfriend (the Grimm), has to battle the dangerous creatures (wesen). I play ‘Juliette Silverton’ - she is smart, sincere and well-meaning. She can be a little naive about the ways of the wesen world --- but that's not her fault, and she's learning. She is a veterinarian and therefore has a background in chemistry etc. I love that the writers are playing with the fact that she can be a little awkward and brainy. 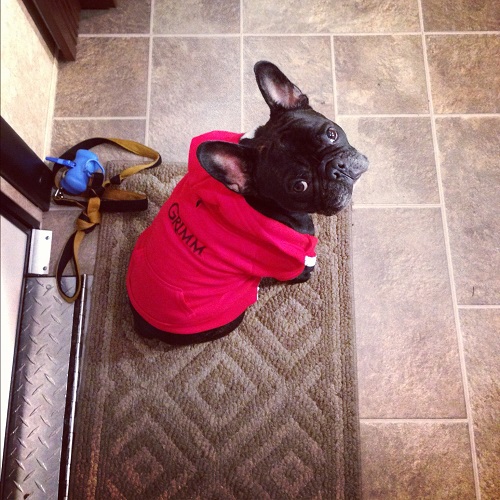 With two films due for release soon 'Dead Draw' and 'Chronic', you must have had a busy 12 months or so. Tell us a little about them (if you know approx. release details also) and what did you enjoy most about the characters you played.

I have been really busy which is wonderful! I'm not sure of the release dates for either film yet as they are both in post-production, but it will likely be sometime 2015. In 'Dead Draw' I play the mastermind/puppeteer of a group of men who pull off heists, which was great because she's very smart and I had always been such a fan of Gil Bellows since 'The Shawshank Redemption' (he plays my love interest). In 'Chronic' I play the daughter of a man who is dying and under the care of a hospice nurse (Tim Roth). That was such an incredible experience because I love the director, Michel Franco. He is a true visionary and shoots in such a different way - a lot of wide shots in one take, so you really need to be responsible and 'show up' so to speak. Plus, I mean - Tim Roth. Enough said.

Which of the many characters that you’ve played do you think Henry would most like to have as his owner?

‘Juliette’ from 'Grimm' of course! She's a veterinarian and an animal-lover. Fans always ask why ‘Nick’ and ‘Juliette’ don't have an animal, but it's really just because continuity would be difficult to maintain. I love the scenes when I get to work with animals -- it amazes me how well-trained and smart they are.

As far as instagranimals,  I follow @manny_the_frenchie and his little brothers @filip_and_liam. I also love @frenchbulldogrescue, @gusvangogh and basically any hashtag such as #frenchiesofinstagram. They are such a sweet, goofy breed and they make me smile.

Moving into some of our questions to get you thinking, if you had to swap roles with Henry for a day, what would you love most about being him? And in reverse, how do you think he would cope being you for a day?

Henry is such a sweet little guy who is happy to be alive (at least I see it that way). Because of the stroke, he has a very distinct wobble-walk that makes everyone laugh - he truly makes people giggle on the street whenever they see him. It's so endearing. So I guess I would love to experience being so carefree and being able to make people laugh just by existing. But I don't think he could handle a day in my shoes! He's totally spoiled and beloved and I don't think he would have the patience to clean up after him and walk him etc. He's much happier being the center of attention. 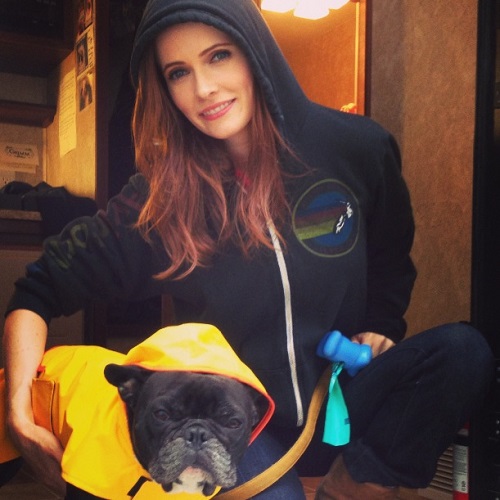 For this question, we ask our celebs to match up the following people’s personality to a breed of dog, for example, Winston Churchill = Bulldog or J.Lo = Afghan Hound, Frank Bruno = Boxer etc. If the following celebrities and dog lovers were breeds of dogs, based on their personalities alone, what type of breed do you think they'd be and why...

Tim Roth (Bitsie’s co-star in the upcoming feature 'Chronic') – a Border Collie because they are prized for their amazing instinct and intelligence; and Roth is such an extraordinary actor who makes wonderful choices.

Zac Efron – A Golden Retriever? That's a hard one to answer because even though we were in a movie together I never actually met him until the Toronto Film Festival when we were promoting 'Parkland'. But he seemed sweet and easy-going, so I would say the closest is a Golden Retriever.

Billie Bob Thornton – He would be a bad-ass mutt! There's something about the way Billie Bob just shows up and gets the job done that makes you instantly respect him, because you feel like he's really lived.

Beyonce – A Doberman because they're known for their stamina and speed.

Big dogs or little dogs – Either, but I do love a squishy face, whether it's a Pug or a Bull Mastiff.

Pedigree dogs or cross-breeds – I don't discriminate. I think it's really up to the owner as long as they are responsible and aware of their pets' potential health problems.

Days off or days at work – They're both lovely, especially since I get to bring Henry to work with me anyway.

Describe the last time you laughed out loud because of something you saw Henry or another dog do.

It always cracks me up when he thinks he is 'hiding' under the bed and basically it's just his head underneath, but his entire body is sticking out like a frog. He also grunts and snorts like a pig, and the leasing office in my building in Portland called me once to say they got an unusual phone call from someone on my floor complaining about the pot-bellied pig. 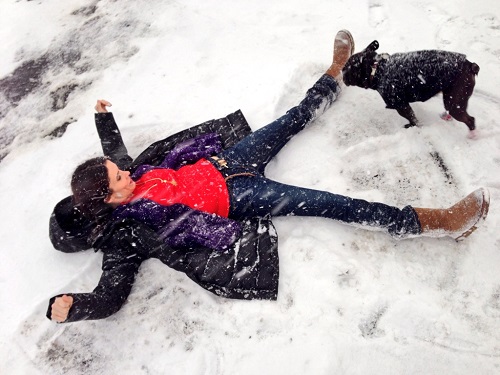 We recently had National Dog Adoption Month here in the UK and there are over 100,000 dogs in rescue centres across the UK waiting for a loving new home. If you could encourage people to consider bringing a dog into their home, what would you say the best thing is about owning a dog?

You'll never be lonely! Sometimes I get bummed out being on location and away from all my friends and family in Southern California, but Henry is always with me. He comes to work with me every day, has a sweet set up in my trailer, and I visit him in between scenes. The crew love him - sometimes I'll go back to my trailer and he isn't there because he's been kidnapped by the wardrobe girls or transport because they love to play with him.

Having a dog has changed my life, I always say it's the best training for someone who is considering having a child. I raised Henry from the time he was 8-weeks-old and especially recently after he suffered his stroke - it's felt at times like as much work as having a baby.

And finally, this is always a tough question and often requires a fair degree of thinking time but….If Henry had the ability to speak and answer one question and one question only, what would you ask him and what do you think that he would say?

I would ask him 'Do you know how incredibly grateful I am for you?' I think he would say 'Yes. Now pick up my poop!'

Many Thanks Bitsie (and of course, Henry)!