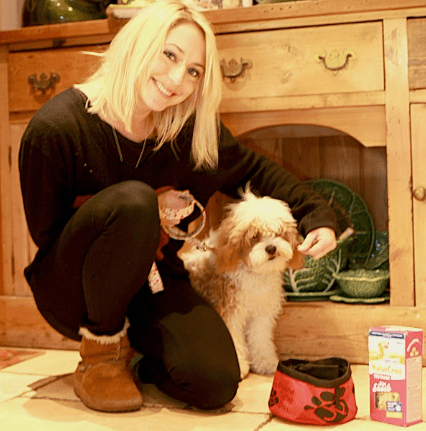 Ali Bastian is a British TV actress best known for playing Sally Armstrong in The Bill and Becca Dean in Hollyoaks. Since reaching the semi-finals of Strictly Come Dancing in 2009, she has gone onto take starring roles in the West End in Burn The Floor and will soon take up the coveted role of Roxie Hart in Chicago where she will tour the UK.

Ali took time out before she started touring to talk about how she thinks dogs mirror their owners, listening to your mum, the best thing about acting on screen and on stage - and of course tell us all about her best friend, Molly.

I have a 7 ½ month old Cockapoo called Molly. She loves to snuggle. I think she has the loving, affectionate side of a Cavalier King Charles Spaniel and is the best of both breeds.

She comes with me to work sometimes and whether I'm sitting in a make-up chair or in a dressing room, she's just so well behaved. She loves children as well which is great, whenever she sees them she gets so excited to play.

I think it's because at a young age I exposed her to all sorts of situations. She got used to being around children, being taken to different place and going on the tube or bus in London. She's a good city dog.

I grew up with family dogs. We had Danny, a rescue Labrador and he was very protective over my brother and I. He had the loveliest nature. We always had cats, fish, hamsters – one hamster got eaten by the cat actually – it just disappeared out of it's cage one day!

Animals were always a big part of our childhood which is why I always wanted a dog of my own, but it had to be in the right circumstances. Having a dog is a big responsibility and so after I had finished a job, I knew I had a few weeks at home and bit of time off coming up in the Summer. That was when I decided to get a dog and Molly came into my life.

I found a breeder near Leeds and she was lovely. I went to visit and they were lovely people. I met the other dogs and I was very happy to take Molly home knowing she'd had a good start in life.

It is funny though when you have a dog and start chatting to people about dogs. Molly's the reason I discovered all about PupAid and heard all about puppy farming. Before Molly I had no idea about it. Now I would really say to anyone thinking about getting a dog to thoroughly research it. More dogs than you probably realise in pet shops or on the Internet are bred by puppy farmers.

If you're thinking about getting a dog, look at rescue centres, or if you're looking to buy a puppy once you've researched the breed, make sure the breeder is interested in your home, your circumstances and ask to meet the parents.

You've been really lucky to become well known for playing two different characters in soaps – Becca Dean in Channel 4's Hollyoaks for 6 years from 2001, to your move to ITV's The Bill where you played Sally Armstrong from 2007. Playing those characters for such a long time in 'Soapland', how did you avoid becoming type-cast?

Well I spent 6 years at Hollyoaks and 3 years at The Bill so I tried to be as varied as possible in the characters I played. “Soapland” itself is a journey and it's really great to be able to try different characters and the story lines for each were so different.

I've really loved the two characters I've played. My character Sally, in The Bill was a bit older and more challenging. My character Becca, in Hollyoaks had an affair with a pupil so that was very different!

I loved my time on both shows, getting to work in different environments with different people, it's all good for cutting your teeth!

After those roles, you then moved onto what must be every girls dress-up dream, Strictly Come Dancing, where you had huge success and has shaped another stage in your career and very soon we'll see you take to the stage as Roxie Hart in Chicago. You must be thrilled?

I really got the dance bug after Strictly Come Dancing! I still dance in London at the studios of Karen Hardy (professional dancer on the show until 2009). After Strictly I went back to my roots and went on tour with 'Verdict', an Agatha Christie play and it was great to do something a little different for a while.

Playing Roxie in Chicago is such a dream come true.It's an exciting marriage of everything and I can't wait!

Would your success on Strictly Come Dancing encourage you to do more reality TV?

Finish the following sentence, my dog is... on springs! She's the bounciest dog.

And finally, this is always a tough question and often requires a fair degree of thinking time but….If Molly had the ability to speak and answer one question and one question only, what would you ask her and what do you think that she would say?

Well my brother lives with me and we say if you look at her you can almost tell what she's thinking when she looks at you. I think she has a good level of understanding.

But I'd probably ask her if she really did like her dry food and I hope she'd say yes, or tell me what she would like instead.

Aristopaws.com – for the Love My Dog Collar and Lead Set

Happy Dog UK – for their tasty treats featured here – NaturCroq which is easily digestible and The Fit and Well Happy Dog Snack with Power Alga Spirulina.  It contains 30% high-value protein in only 9% fat.  The super Premium Snack with vitalising  L-Carnitin and the original New Zealand Mussel based on the unique Happy Dog Life plus Concept® and made out of natural ingredients.  Choose Happy Dog UK to give your dog the best.

UrbanPup.com – for their new dog perfume

Wuff in Style – for the soft dog toys

And last but not least, Sharah Smith Photography