Three years ago, when I lost my Labrador, my Rottweiler was lost. She became noticeably quieter and withdrawn and for her sake, perhaps before I might have been ready, our house became loud and noisy with young dogs thundering through. And looking back, it helped both of us heal.

She tells us how hearing about a dog event triggered a chain of events that saw her adopt not one but two ex-puppy farming dogs looking for a fresh start in life. 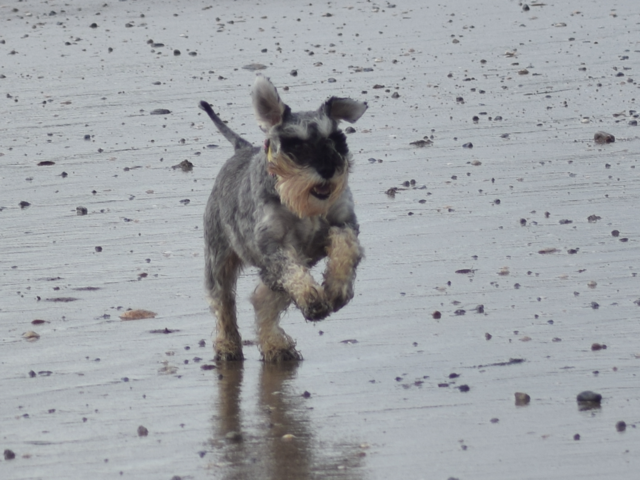 It might seem odd that watching Mabel thundering with a puppylike gait down a beautiful Welsh beach with the biggest smile on her face followed by Bella barking and wagging her tail is a scene that reduced me to tears. The fact they looked like any other dogs is astounding.

Mabel and Bella are not puppies. They are both seven years old but they didn’t have a normal upbringing until they were rescued. 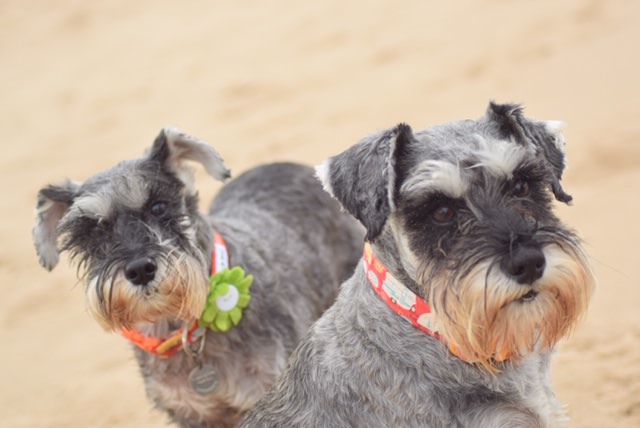 Mabel and Bella at the beach

They didn’t have the space or opportunity to learn to run when they were young.

Instead, they had simply been used as breeding machines in a puppy farm until they were no longer making a profit. For seven years they had nothing. I cried simply because this is what they always should have had. Bittersweet!

So how did we come to have not one but two ex-puppy farm dogs?

Three years ago, walking our Schnauzer, Toby on a Dorset beach we were told about something called ‘Schauzerfest’, which is a series of fundraising walks for Schnauzers and their owners. 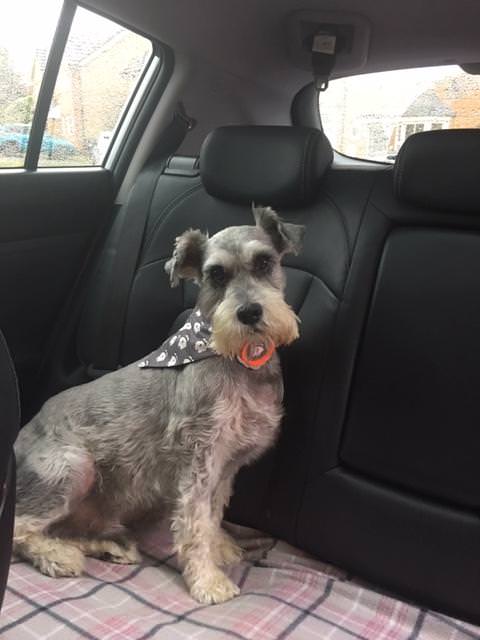 Toby on his way to Schnauzerfest

We turned up for our first ‘Schnauzerfest’ walk in Hampshire, a little nervous admittedly, and learnt that as well as being a fun and welcoming walking event, there was also an amazingly important fundraising purpose that I was unaware of.

It was a great walk. I met Donna and Twinklet who was being carried in a sling and I learnt of Twinklet’s own survivor story. I also won a book in the raffle called ‘Saving Susie-Belle’, which is written by Janetta Harvey. I read the book before the day was out and from that point, our love of ‘Schnauzerfest’ and a beneficiary of the fundraising, the Diana Brimblecombe Animal Rescue Centre (DBARC), began.

After a lot of thought, research and conversations with Janet and Donna at DBARC last year we felt we could offer a puppy farm survivor a good home, so this year, Bella became a member of our family. 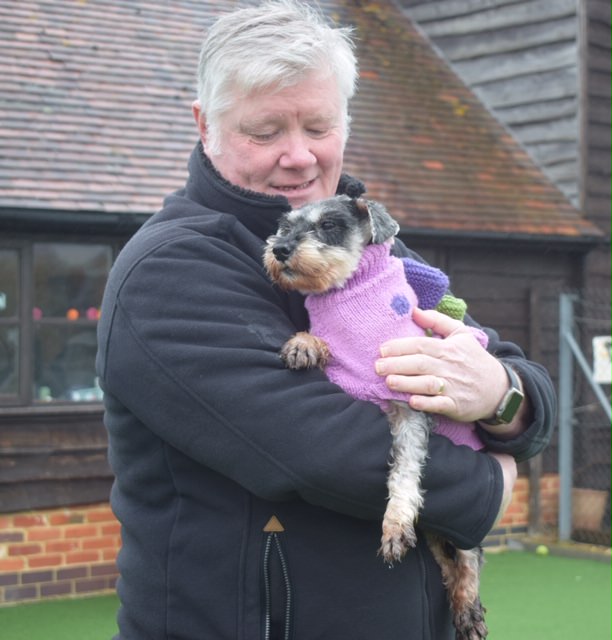 At the same time, Toby was losing his battle with Lymphoma but he instantly rallied to this terrified little girl who had never been in a home before and in return, Bella reacted. She only trusted him. 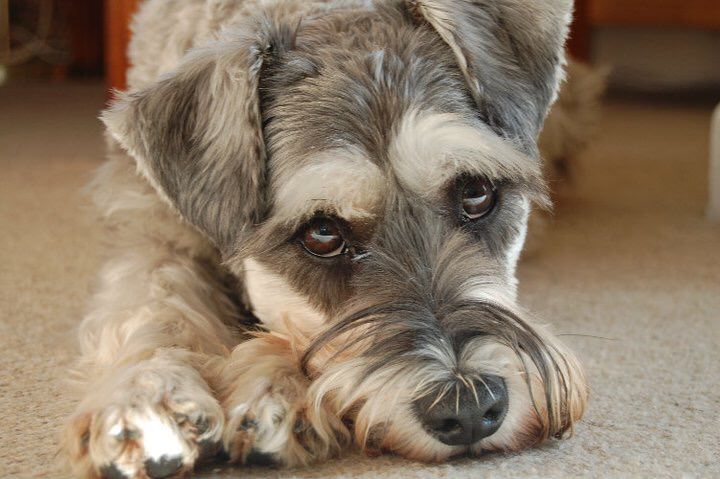 With Janet’s advice to ‘acknowledge her past, but don’t feel sorry for her’, when we first brought her home, we placed her on the floor to explore her new surroundings.

She loved Toby and was walking with him off the lead in a matter of days. 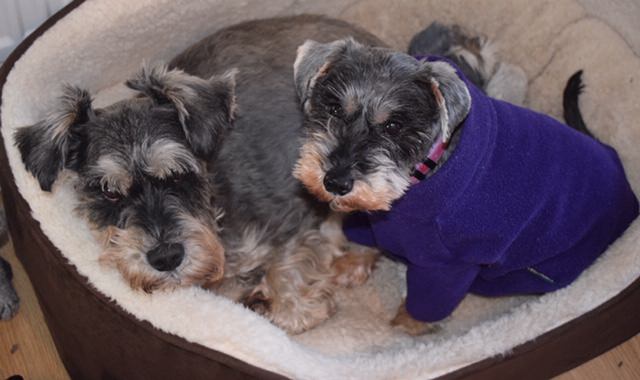 Bella's first night in her new home with Toby

One month later, Toby lost his fight with cancer.

We were all howling (Bella the loudest) and while we were grieving still, we knew we could do something about her pain. 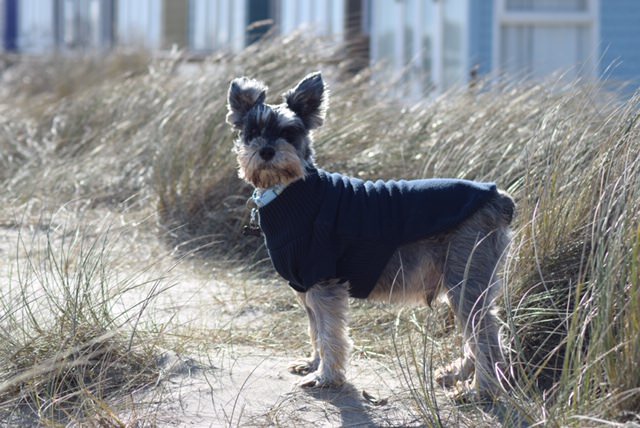 A heartbreaking loss; a cry for help

Bella needed a companion. We had known this from when she first joined our family, so we made an early call to DBARC and we set off in the snow to ‘borrow’ a friend for Bella. I was absolutely broken and feeling guilty, but this was for Bella, not us.

The trust Janet and Donna placed in us still humbles me, and in the middle of a snowy yard, we were trusted with another puppy farm rescue, a grey bundle in a red fleece called Lush.

Lush had been an ex-kennel mate of Bella’s at the rescue centre and ironically, one of the photos ‘Schnauzerfest’ used to explain how their funds are used was of this little lady, and weeks earlier at the event I realised I had taken a photo (below) of her in my husband’s arms. 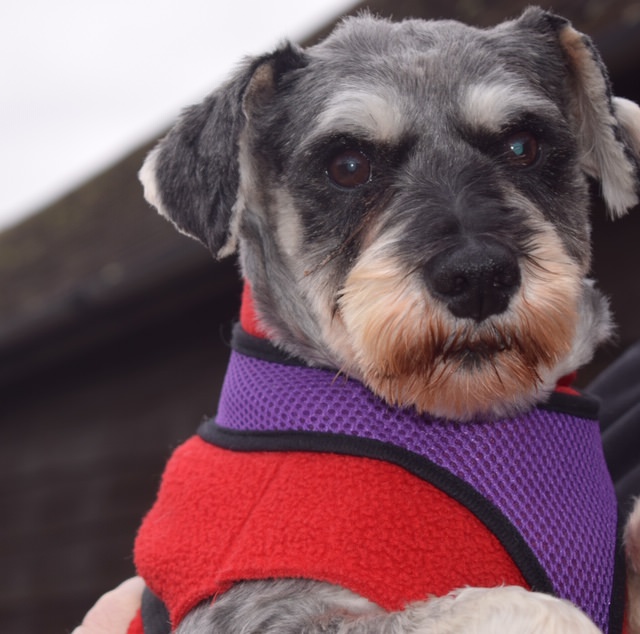 At that time, she had been totally blind. Now she was looking up at me with restored eyesight and no other expectations at all.

Re-introducing these two ex-kennel mates was very emotional, they knew each other and that made them happy. 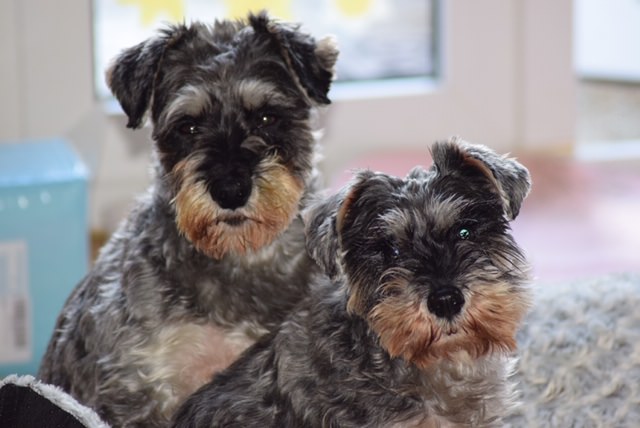 Bella and Mabel, when first reunited

It’s unusual to have two puppy farm survivors and no ‘lead dog’ but these were unusual circumstances and we are still honoured that Janet and Donna trusted us whilst providing lots of support. I was anxious and felt the weight of responsibility that these poor girls down would not be let down again.

Who was I kidding? Lush was never going to be a ‘borrow’ was she? How could you give this little, scared girl, who was starting to like being in a house, back to wait for someone to adopt her? 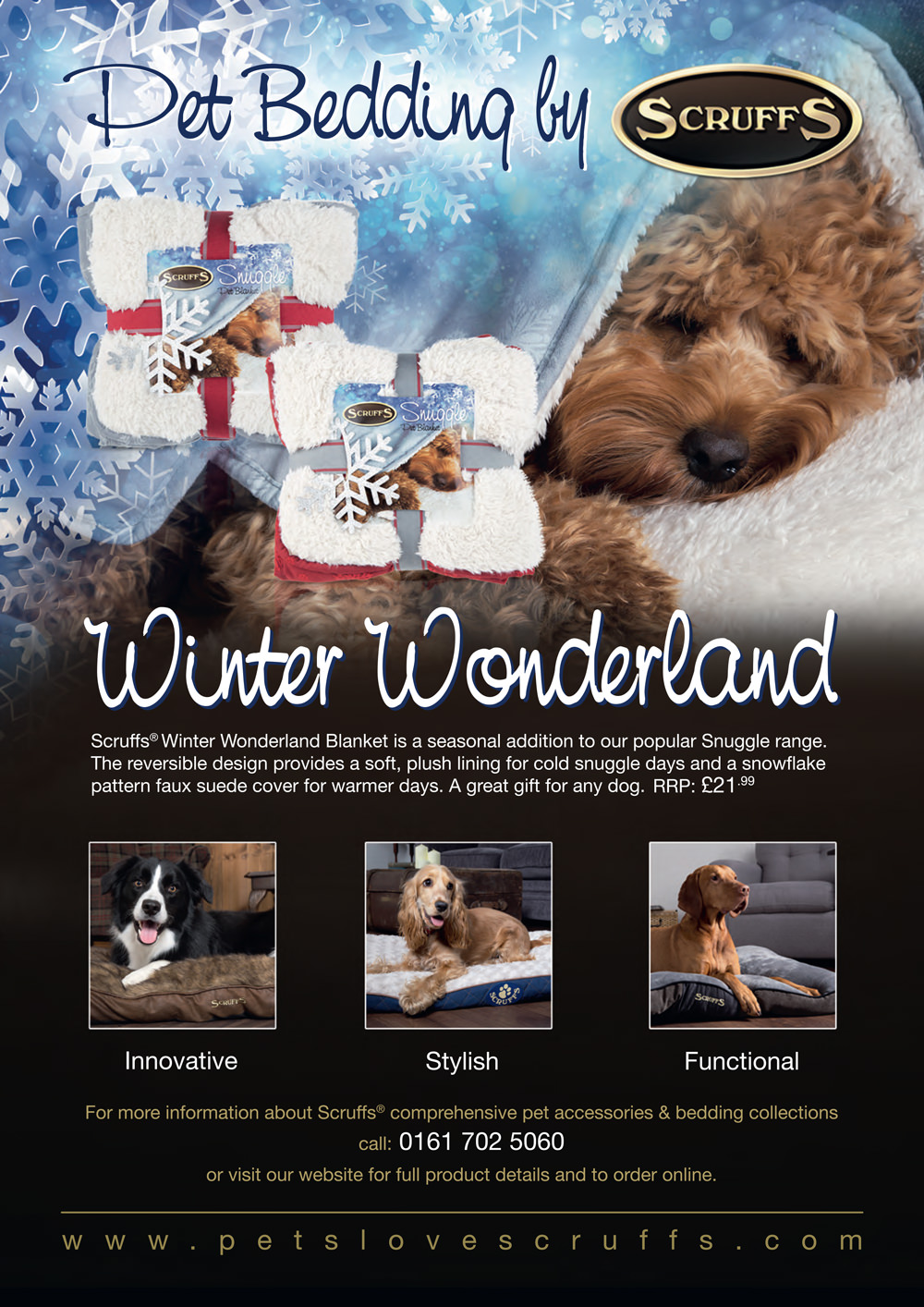 We adopted Lush on my birthday at the end of March and we changed her name to Mabel.

Changing her name wasn’t really optional. In the park one day we discovered she liked to trot after the odd jogger. Having my 6ft 5 husband Steve turning to shout ‘Lush’ towards her - and the joggers - wasn’t going to work. So we had a little renaming ceremony and Mabel became her new name.

So was it easy having two puppy farm rescues?

No, not always but has it been rewarding? Yes, a thousand times over.

Would I do it again?

I hope that I don’t have to and these terrible puppy farms are stopped, but I think sadly that it will not be soon, and I would rescue again. Every single time.

What were the key challenges?

Planning. Toby was the ultimate chilled dog and he just slotted into our life. Medically Bella and Mabel need to be considered, they both have eye drops twice a day every day.

They were already seeing the benefits of their time in rescue when they came to join us but they needed good nutrition and they did not understand that there was always water nearby and they would never go hungry again.

Bella was car sick in the early days. We think she was just anxious because she is rarely sick nowadays. 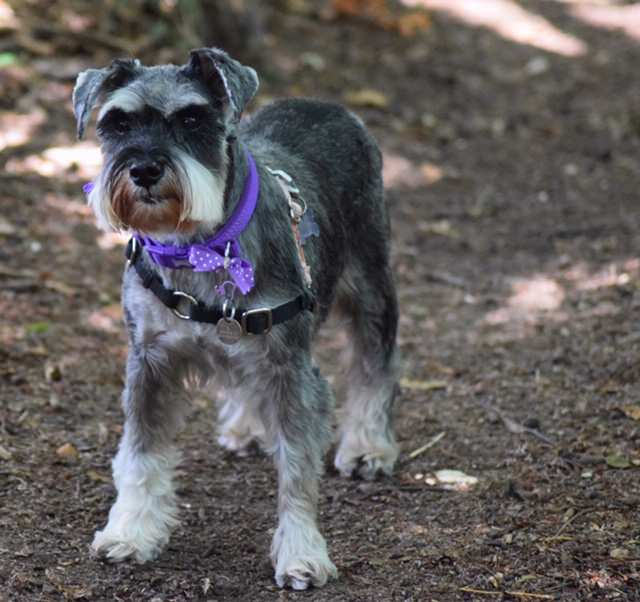 Neither could walk on a lead - this is still a work in progress.

We went to the annual ‘Schnauzerfest’ walk in Dovedale this year and as everyone set off, our two went backwards, sideways then after a long while forwards. 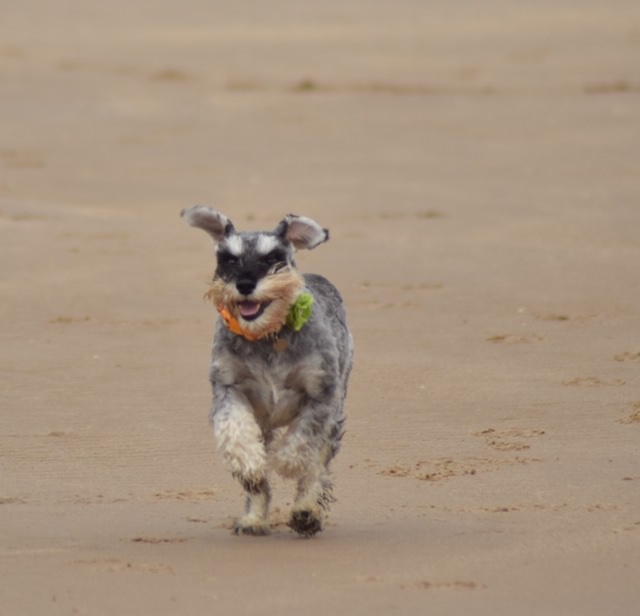 They could not go up or down the stairs. They had never encountered them.

It was worse when they learnt one way and had to be ‘rescued’ (many, many times). I had to put stickers on the french windows as they had not encountered glass.

Normal things terrify them - they were scared of us (I’m not for a moment saying we are normal!), but I naively thought after a week or so this would go. In my mind, I was going to become a ‘puppy farm dog whisperer’ and they would be bounding to meet me as their saviour. Reality check time!

They spent seven years incarcerated in a hell hole. If I were them, how trusting would I be?

Add to that their puppies were taken away (and dogs do grieve), I would say they have what we would call post-traumatic stress syndrome and clear mental health issues.

But time is something they and we have, and I quickly realised I could not care less about them becoming ‘normal dogs’ (if such a thing exists).

I just wanted to make sure they started to experience the good life and feel safe, anything else is a bonus. I take this very seriously.

Mabel is very sensitive to noises. She hates the bleeps of the microwave and the dishwasher and hides when I dry my hair. Is this because of the electronic feeding machines in the puppy farm - who knows? Bella still prefers to observe cuddles happening to Mabel, but seeing her cheeky sense of humour emerging is both adorable and an honour to witness.

‘The wins are amazing’

Seeing them get excited about walks and how they enjoy treats is such a joy. Their first ice cream was a real tear-jerker.

Watching Bella batting a ball for the first time (they don’t understand the concept of play) and how they greet us by barking and wagging tails like crazy (before running away) are all winning moments to cherish.

We use a buggy to get them used to crowds and give them a safe place when we are out (oh and to get them into pubs!). My local supermarket (if they are well zipped up) has not yet found out that my ‘babies’ have tails and beards. 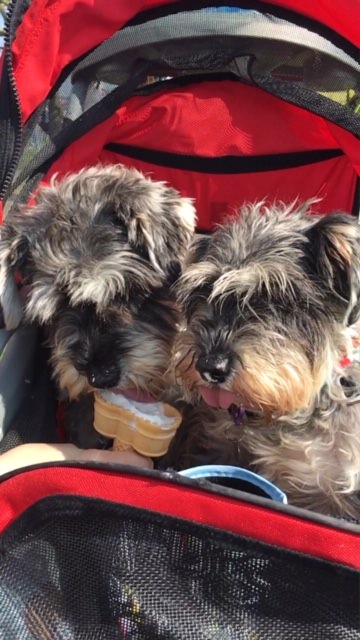 They went to France this year on the ferry and really were amazing - they loved it. They adore the caravan and time away and relish being outside walking and sniffing. Just learning to be dogs, really.

Following something I learnt from Janetta’s books with Susie-Belle, we are loading them with new things and experiences. Most take them out of their comfort zone but they are safe and learning about the caring world they now have and we love them unconditionally.

We have had so much help and encouragement from too many to list, but they know who they are, particularly at DBARC and ‘Schnauzerfest’.

What advice would I give?

This is very difficult for me to answer. Like a new parent there is oodles of advice out there and each dog is unique. 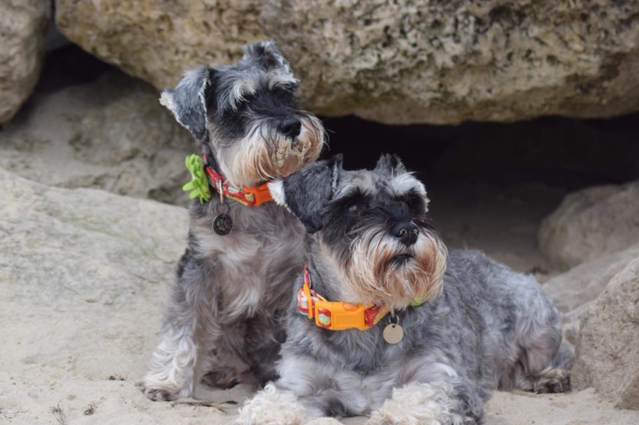 I am a total novice at this and have to watch and be aware of their comfort zones.

But I would say if you have space in your heart, patience and the time for one of these desperately let down special dogs, then go for it.

Listen to advice, read owner's stories and work out what is good for your dog. Oh, and as they have never lived in a house before, buy a good mop and bucket and be prepared to use it!